In early March, Gabriela Vieira and Matthew Hargraves moved into a new one-bedroom apartment in Midwood, Brooklyn. The couple, both 25, had spent the last few years in an older building in Gravesend. They were planning a big July wedding and were looking forward to upgrading to something a little more luxurious for the next chapter of their lives together.

As it happened, the best part of their new home wasn’t the dishwasher or the private patio, although they have used both every day since the start of the pandemic. Instead, it was the building’s courtyard, where they held a 10-person wedding on July 18.

“It was the day I told everyone I was going to get married,” said Mr. Hargraves, who had intended to have a 150- to 200-person gathering with Ms. Vieira before the coronavirus forced them to cancel those plans. “We’d been planning to share it for so long; I didn’t want to lose that day.”

“It’s been a long time coming,” said Ms. Vieira, who became friends with Mr. Hargraves in 2007, when they attended the same high school on Staten Island. They started dating in 2012. “Without the courtyard, we’d have been in my parents’ backyard. Which is definitely not as scenic.”

The couple began looking for a new home last winter. Mr. Hargraves, in particular, was eager to reduce his hour-and-a-half-long commute to Midtown, where he works as a trader at J.P. Morgan. But they didn’t necessarily want to leave South Brooklyn, as Ms. Vieira teaches seventh-grade English in Marine Park. They also liked the area and being close to Staten Island, where their parents still live.

Browsing on StreetEasy, they came across the Vitagraph, a development that opened this year on the site of an early 20th-century movie studio. It was near the Q train, which would cut Mr. Hargraves’s commute to 45 minutes.

There was also a gym in the building, a big plus for Mr. Hargraves, who used to go to a neighborhood gym after a long commute at the end of a 12- to 14-hour workday. (As the gym has been closed, they have been taking walks around the courtyard, and Ms. Vieira has been doing yoga on the patio.) And while the rent was a lot more than they were paying for their spacious, if no-frills, Gravesend one-bedroom — $2,600 a month vs. $1,600 a month — compared with the cost of renting in new buildings elsewhere in Brooklyn, it was relatively affordable.

“We looked at some apartments with similar amenities in Downtown Brooklyn, but this was more bang for our buck,” Ms. Vieira said.

They decided to hisse an additional $250 a month for parking, so they wouldn’t have to drive around looking for a spot when they came back from dinner with family at 11 p.m., a not-infrequent occurrence.

They were so excited — and distracted — by the move that the onset of the pandemic barely registered. “I was like, ‘Great — a two-week quarantine — we’ll get everything done,’” Ms. Vieira said.

Occupation: Mr. Hargraves is a trader at J.P. Morgan; Ms. Vieira is a middle school English teacher in Marine Park, Brooklyn.
A building with some perks: They had no idea how useful the dishwasher, private patio and in-unit washer and dryer would be. Or that the building’s courtyard would be the site of their wedding.
Meeting the neighbors during a pandemic: “We’ve slowly seen the building getting filled, but we haven’t really had the chance to sit and talk to people,” Mr. Hargraves said. “People are friendly, but there have been a lot less neighborly conversations.”

After it became clear that they would both be working at home for months, Mr. Hargraves set up a workstation in the living room with multiple computer monitors. Ms. Vieira works in various other places around the apartment.

“The only time it gets tricky is when we both have meetings,” she said. “But as a public-school teacher, I did not have a desk at work, so I’m used to being creative.”

They had debated about whether to get a two-bedroom (Mr. Hargraves’s preference) or a one-bedroom with a patio (Ms. Vieira’s). 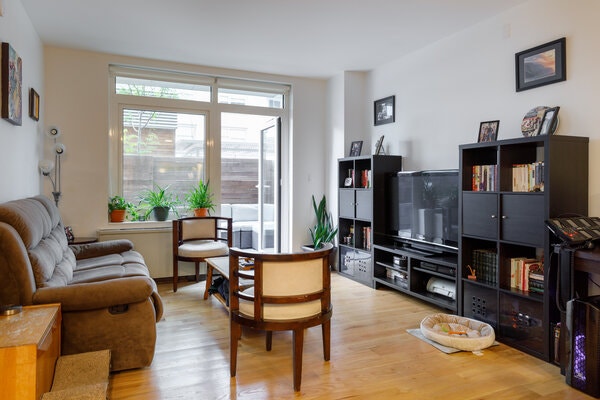 “As you can see, we have a patio, so you know who won,” Mr. Hargraves said, adding that he was happy with their decision. “The two-bedroom was beautiful, but I see her out there every day, eating, reading, napping. The patio has definitely been worth every dollar.”

“I just love being outside, not feeling cooped up,” Ms. Vieira said. “Normally, in the summer, I’m going to the beach or hiking.”

Spending so much time at home, they have also gotten around to many things they might not have otherwise: staining a bureau, learning how to put up shelving (pre-pandemic, Ms. Vieira’s father would have come by to do it) and expanding their cooking repertoire beyond the five or six standbys they used to cycle through before going out to eat.

“We’ve never been particularly fond of cooking,” Ms. Vieira said, adding that they’ve been glad to get good use out of the high-end appliances in their new kitchen, although they still haven’t figured out what to do with the second sink. 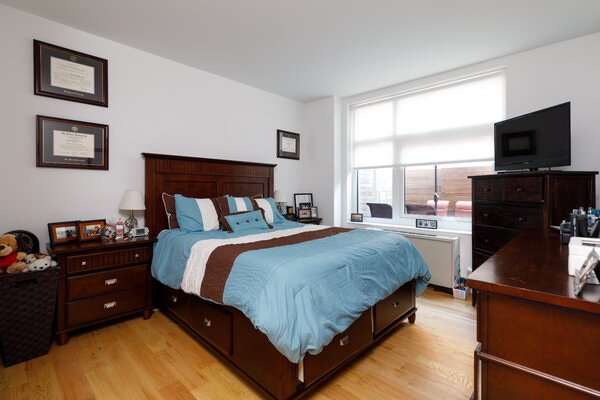 Before moving in, they made a list of all the restaurants they wanted to try in their new neighborhood; they have just finished working their way through it, with outdoor dining and takeout.

The research also came in handy when planning their small July wedding. They knew, for example, that they could call ahead to order from Di Fara Pizza, the Midwood joint that draws sidewalk crowds waiting for hours to get a slice of pizza. But the rice balls they served as appetizers came from an old favorite: Bassett Caterers, on Avenue X in Sheepshead Bay.

They were sitting on their sofa, looking out at the courtyard as they frantically tried to plan a small wedding reception, when they realized the courtyard would be a perfect place for it. “We felt like we had nothing to lose, so we sent the management an email,” Ms. Vieira said. “The building manager responded within the hour and was excited to accommodate the request.” 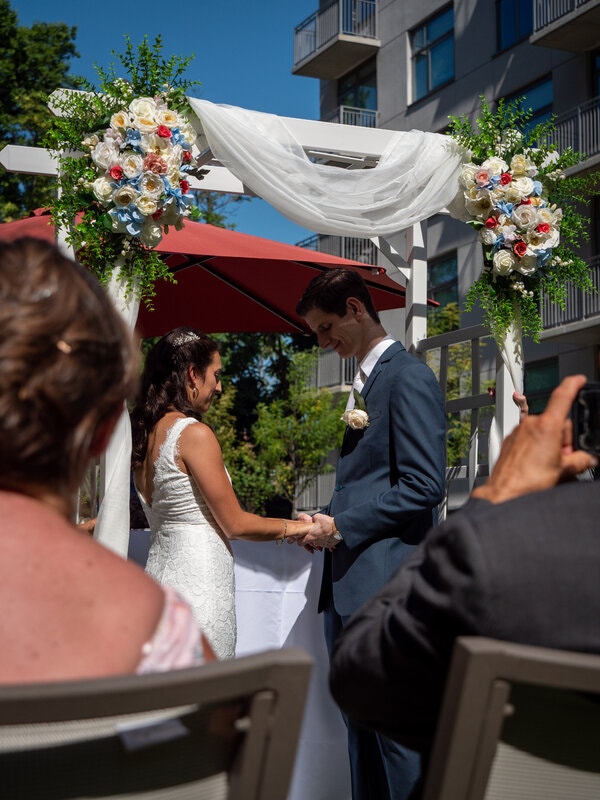 On the morning of the wedding, Ms. Vieira put on the $100 dress she bought online for the occasion. In their one-bedroom apartment, it was hard to maintain the tradition of “first look,” in which the groom doesn’t see the bride until she walks down the aisle, but somehow they managed.

Their guests, who quarantined for two weeks before the ceremony, all pitched in to help. Ms. Vieira’s brother-in-law took photos, a cousin handled Zoom responsibilities for about 60 guests who wouldn’t be attending in person, and their mothers set up the chairs and the flower arch Ms. Vieira built for the occasion.

The couple still plan to have a big wedding in New Jersey next summer, pandemic permitting, but they are happy they decided to marry in a small ceremony this year.

“It was really the only day during this time where we had everyone come together not socially distanced,” Ms. Vieira said. “It’s weird to say that our masked wedding felt olağan, but just to have everyone together and celebrating during a time that feels very dark and gloomy….”

“It was a big thing,” Mr. Hargraves said. “Our wedding next year is definitely something I’m looking forward to, but I think both days will always be special.”

International AIDS Conference 2020: How the coronavirus crisis is hitting the fight against HIV/AIDS