WASHINGTON — As 20,000 tiny flags waved in the grass around the Washington Monument to memorialize more than 200,000 Americans dead from the coronavirus, mourners lined up on Wednesday to hisse respects to Justice Ruth Bader Ginsburg, whose coffin lay outside at the top of the Supreme Court steps.

Washington can be quite versatile in its tones and attributes.

The capital often lurches in a matter of seconds from class to crass, from the deeply personal to the nakedly political. The president tweets photos of his packed-in campaign rallies in Pennsylvania and the bells toll at Washington National Cathedral 200 times, as happened Sunday, each one to mourn a thousand American lives lost to the pandemic.

Justice Ginsburg’s death has brought a particular whiplash of sadness and rage in recent days to Washington, an overwhelmingly Democratic city facing the loss of a revered icon and the prospect of a six-to-three conservative majority on the court for generations. Scorched earth notwithstanding, Wednesday was a crystalline late September day in the capital.

“When I got here, I could immediately feel the tension of the place,” said Justin Chandler of Ithaca, N.Y., who was sitting on First Street opposite the Supreme Court just after Justice Ginsburg’s coffin had been carried up the court steps for a funeral inside. Mr. Chandler, who held a “Not All Heroes Wear Capes, Some Wear Neck Collars” sign next to a photo of Justice Ginsburg,said he was struck by the contrasts of the city: protesters alongside mourners, somber ceremonies mixed with searing rhetoric and a relentless sense of uncertainty all around. 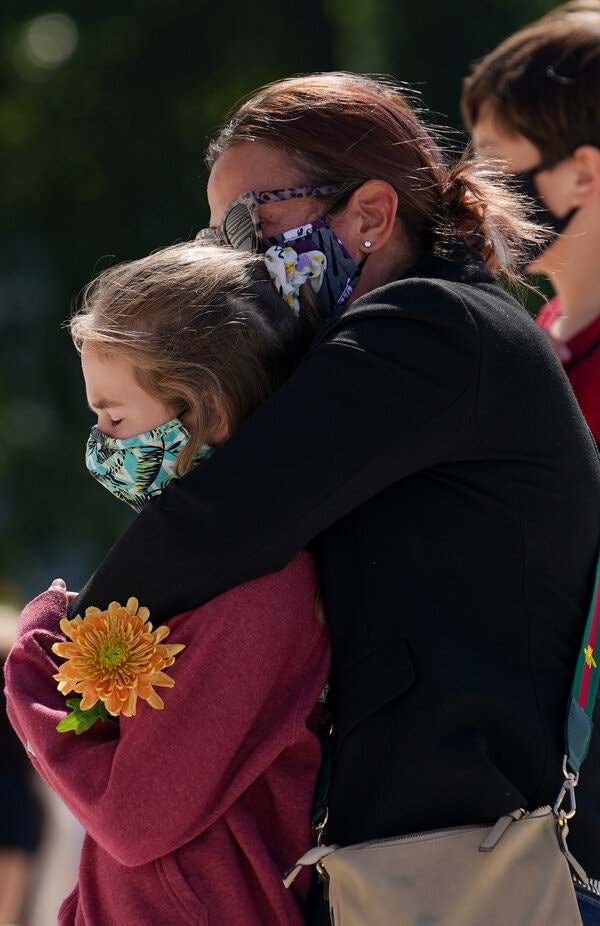 Even the most hard-bitten sages of the capital have been gripped by dread over what might be in store in the next few months. Between the crescendo of an ugly campaign, a president unrestrained, a pandemic unchecked, the prospect of a disputed election, warnings of violence after Nov. 3, could the level of distrust, dysfunction and division get any worse? Whatever else could happen?

Last Friday evening, a big whack of “whatever else could happen” happened. All over the city, there were shouts of “no!” as cellphones popped with the alert that Justice Ginsburg had died, at 87, from complications of pancreatic cancer.

The specter of her death had loomed over the progressive bubbles of deep blue Washington as the ultimate nightmare scenario of the Trump presidency. Her age and illness made the prospect ever-present. Yet her ability to cling to life at a time when so many creaky institutions were barely clinging to theirs represented a quiet state of defiance.

“You can feel here that there’s been a disturbance to the force,” said Jim Doherty, an environmental lawyer standing amid a winding collage of candles, signs, flags, flowers and people who had assembled at the steps of the Supreme Court — as they have since Friday — to mark the justice’s passing. Children wrote messages in chalk on the sidewalk, set down candles or quietly walked the perimeter of the vigil.

Ostensibly, the mourners came in tribute to an extraordinary American figure, but also conveyed a sense that they were grieving for something beyond a single life. 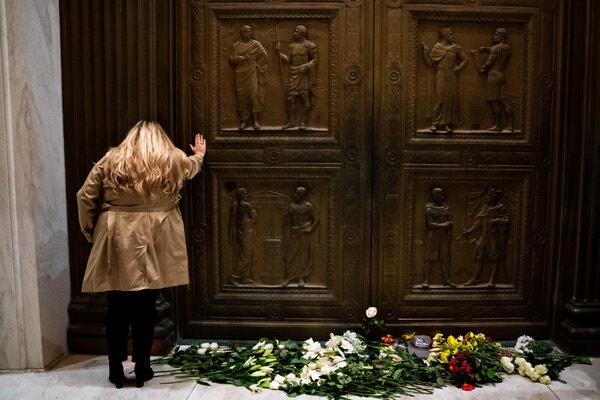 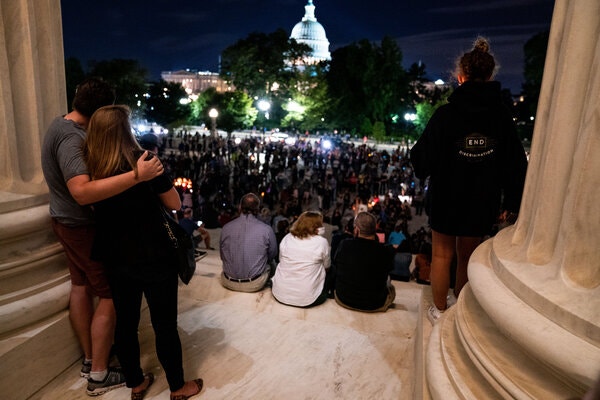 For as long as Justice Ginsburg was alive, it forestalled the prospect of an epic political and cultural battle at a time when Washington, and the country, seemed uniquely over-circuited.

For how many “reckonings” can a country have at evvel? No matter where you sit, America seems to have a reckonings backlog — over racial justice, gender equality, public health, the rule of law and voting rights.

The one bipartisan feature of all this, from all sides, is exhaustion.

“We all knew this day would come, but it’s still jarring,” said Talya Bock, a financial planner, who was paying respects to Justice Ginsburg on Sunday night at the Supreme Court. Ms. Bock said then that she held out hope that Republicans, somehow, would decide not to move on Justice Ginsburg’s replacement until after Jan. 20, Inauguration Day. “If they have any conscience — and I have extreme doubts that they do — they will not do this.”

But as senators streamed back into Washington on Monday and Tuesday, they rapidly fell in line behind Senator Mitch McConnell of Kentucky, the majority leader. Only two Republican senators — Susan Collins of Maine and Lisa Murkowski of Alaska — said that whoever is elected president on Nov. 3 should nominate the next justice. One of the last Republican holdouts and a frequent Trump critic, Senator Mitt Romney of Utah, said on Tuesday that he, too, would support Mr. McConnell’s position.

As any remaining doubt fell away, Senate Democrats displayed a level of fury that was well beyond the usual umbrage. “Leader McConnell has defiled the Senate like no one in recent history,” Senator Chuck Schumer of New York, the minority leader, said in front of the Capitol on Tuesday. He called the decision to fill Justice Ginsburg’s seat an act of “brute political force” that would make it hard to trust Senate Republicans on anything again.

“It’s created a lot of mistrust and ill feeling,” Mr. Schumer said, “in a way that I have not seen occur in the Senate for a very long time.” 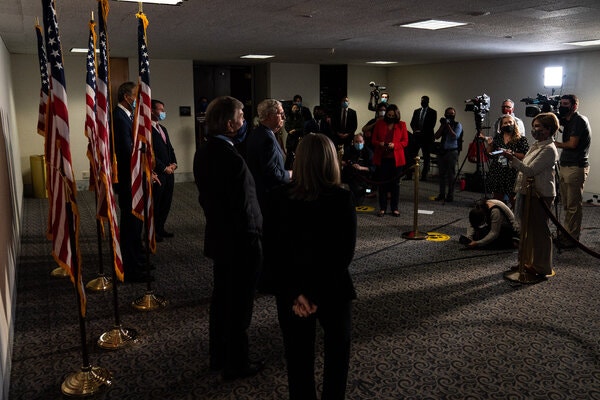 Few Republican senators seemed eager to discuss the matter. As they spilled out onto the Capitol Hill sidewalk from a caucus meeting on Tuesday, not many seemed to have the stomach to attempt the tortured logic of why it was OK in 2016 for Senate Republicans to block President Barack Obama’s Supreme Court nominee — Judge Merrick B. Garland — on the grounds that it was too close (eight months) to the presidential election, but fine for them to proceed with whomever Mr. Trump picked (seven weeks) before the 2020 election.

One by one, the Republicans scurried away from about 20 waiting reporters.

None of them stopped.

“Hey, there’s Susan Collins,” a reporter said. Ms. Collins, who is trailing in her re-election campaign and has been vilified by the left and the right alike during the Trump presidency, managed a quick wave and an apparent smile from behind her mask.

Someone asked if she was having fun. 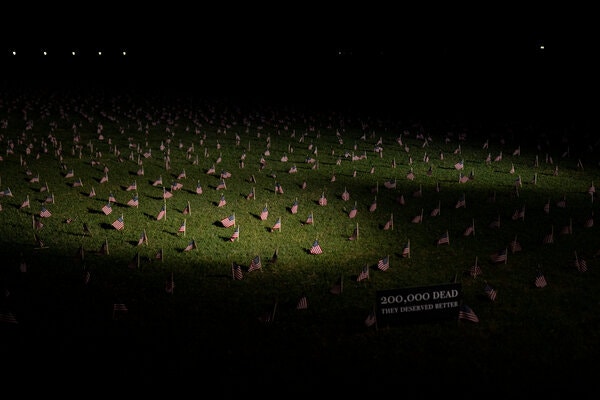