LONDON — Prime Minister Boris Johnson has always looked for the silver lining in Britain’s response to the pandemic. Last spring, he promised to “send coronavirus packing” in 12 weeks. In the summer, he cajoled people to return to their offices and restaurants, even offering to subsidize their meals.

On Tuesday, however, an uncharacteristically somber Mr. Johnson offered no sweeteners as he announced a raft of new restrictions on British society to try to keep the second wave of infections now hitting the country from getting far worse through the fall and winter.

Pubs and restaurants will close at 10 p.m., people are now urged to work from home and fines on those who break the rules on the size of gatherings or wearing face masks will be doubled to 200 pounds ($255) for first-time offenders. The restrictions, he said, could stay in place for the next six months.

“We always knew that while we might have driven the virus into retreat, the prospect of a second wave was real,” Mr. Johnson said to a socially distanced chamber in the House of Commons. “I’m sorry to say that, as in Spain and France and many other countries, we’ve reached a perilous turning point.”

Britain is reporting about 4,000 new cases a day — the highest figure since May, and seven times the daily average in early July — with a rate of hospitalization that is doubling every seven to eight days. While the daily death toll and the number of hospitalized coronavirus patients are still quite low, the government’s scientific and medical advisers said that, unchecked, the virus could spread exponentially, to 50,000 new cases a day by next month and 200 deaths a day by November.

For Mr. Johnson, that grim arithmetic has forced him to reverse course on upbeat initiatives, like restoring spectators to sports events, getting workers to fill up empty office towers or reviving the restaurant and bar trade. But unlike previous reversals, Mr. Johnson’s latest pirouette drew little criticism.

The pitched debate among scientists and politicians about how best to handle the pandemic has been largely settled in Britain. People on both sides generally agree that the best course is one that tries to curb the spread of the virus through social-distancing measures while at the same time aiming for a degree of normalcy, with schools, shops and even pubs open, though with an earlier curfew.

Mr. Johnson, desperate to avoid a return to full lockdown, cast these moves as a “stitch in time to save nine” — a well-timed, targeted effort that would avert more blunt-force restrictions down the road. It was a rather modest slogan for a swaggering politician who evvel promised the public that Britain would “squash the sombrero” by imposing a strict lockdown that would suppress the bulge in cases in the first wave of the pandemic last March.

Britain did avoid the deluge of patients that left Italy’s hospitals in near collapse. But it still ran up the largest death toll of any country in Europe, delayed in taking preventive steps, failed to organize an effective testing and contact tracing program, and sowed confusion with its public messages, which experts said hampered acceptance of simple measures like wearing face masks.

“To be fair, the government has moved,” said Devi Sridhar, director of the küresel health governance program at the University of Edinburgh. “But the messaging has been really poor. ‘Eat to help out’ directly subsidized the most dangerous places to spread the virus,” she said, referring to the summer restaurant campaign of government-subsidized meals.

Professor Sridhar said the new restrictions might help safeguard one of Mr. Johnson’s cardinal goals: keeping schools open. In the past, some experts had said the choice might come down to closing schools or closing pubs. By closing pubs earlier — and avoiding the late-night drinking that the prime minister said was particularly risky for spreading the virus — he hopes to keep both open.

“It’s going to be a struggle going into the winter because of a combination of weather and fatigue,” Professor Sridhar said. 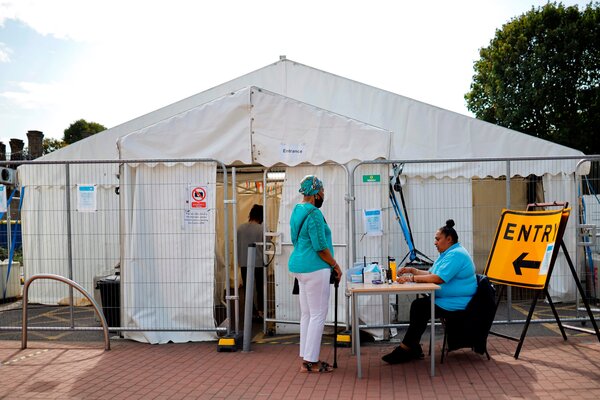 The leader of the opposition Labour Party, Keir Starmer, said he backed Mr. Johnson’s new measures, even as he criticized the lack of an adequate test-and-trace system and raised a red flag about how the government planned to support jobless workers after its wage subsidy program runs out in October.

Putting off these moves and then having to resort to a second nationwide lockdown, Mr. Starmer said, would be a “failure of government.”

His remarks in Parliament came after he made a broader case against the government in an address to the Labour Party’s annual conference. Speaking to a mostly online audience, Mr. Starmer said, “It makes me angry that, just when the country needs leadership, we get serial incompetence.”

“The prime minister has had months to prepare for this, but instead of getting a grip, the government has lost control,” he said.

Even as he castigated Mr. Johnson and his Conservative Party government, Mr. Starmer acknowledged the opposition had much work to do to win back supporters, following its thumping defeat in elections last December.

“Let’s be brutally honest with ourselves: When you lose an election in a democracy, you deserve to,” he said. “You don’t look at the electorate and ask them, ‘What were you thinking?’ You look at yourself and ask, ‘What are we doing?’”

These have been awkward times for the Conservatives as well. Tensions within the party had risen before Mr. Johnson’s announcement, following leaks that suggested that he was considering more drastic measures, including a lockdown to coincide with a short school vacation in October. The idea would have been to act as a “circuit break” on the rise in infections, at a time when it would have been less disruptive.

To many lawmakers, that posed a threat both to the fragile economic recovery and to individual liberties. Several senior Conservatives also complained that Parliament was being sidelined over critical decisions. Ministers had “got into the habit of ruling by decree,” Graham Brady, chairman of the influential 1922 Committee, which represents backbench Conservative lawmakers, said to the BBC.

In the end, Mr. Johnson drew back from the toughest potential measures, arguing that the economy needed protection alongside the nation’s health. In Scotland, which lifted the lockdown restrictions more slowly than England, the Scottish government banned people from visiting each other’s homes.

Instead, Mr. Johnson emphasized enforcement of the new rules, with the heavier fines and what he said would be more zealous policing. He even said that the army might be deployed to support the police, though Downing Street later insisted that the military would only be used in support functions.

For all his gravity, Mr. Johnson allowed himself one typically sunny moment. Referring to advances in treatments and a potential vaccine, he said, “All the medical guidance I have is that by next spring things will be vastly, vastly improved.”

In London, confusion and scepticism over new COVID-19 rules