Joseph DeLissio never felt called to become a master sommelier. He didn’t post Instagram photos of himself posing with cult wines. He didn’t try to make his own wine, start an import company or initiate a podcast, all standard activities for 21st-century sommeliers.

For 43 years, he just did his job. At least he had a great view.

Until last month, Mr. DeLissio, 65, was wine director of the River Café, the glassy, glittery barge restaurant moored on the Brooklyn waterfront. The Brooklyn Bridge soars overhead, and the majestic skyline of Lower Manhattan dazzles from across the water.

Every year thousands of diners from around the world arrived to celebrate birthdays, anniversaries and business deals. Some came simply to take in the view. Many enjoyed a few of the bottles Mr. DeLissio carefully accumulated over his many years overseeing the comprehensive wine list.

With the onset of the Covid-19 pandemic, as the restaurant industry sinks into an alarming unknown, Mr. DeLissio decided earlier this summer that he had had enough. It was time to retire.

After putting the wine program in shape for the River Café to reopen for outdoor dining in July, he turned in his keys in mid-August.

“I was heading in this direction — 43 years is a long time, but the pandemic certainly pushed it,” he said. “Like much of the industry, I lost my health deva. A horrible thing has happened, but it’s the best time for me to go.”

Joey D., as he is widely known in the wine world, was the dean of New York City sommeliers. In an industry where stability is rare, he never felt the need to find something better or different, or even to call much attention to himself.

Since he was hired in 1977, the city has risen from the depths of financial ruin to an almost arrogant prosperity. Stick-figure towers and needle-nose high-rises now lay claim to the skyline, and everybody with money is a wine collector.

From his post, Mr. DeLissio has seen New York stunned by 9/11, rocked by the 2008 financial meltdown, washed over by Hurricane Sandy and closed down by the coronavirus. Until now, it has always bounced back.

He also helped set in motion the rise of American wine culture. When he joined the River Café shortly after it opened, he said, the wine list included just 12 bottles. Spirits made up 90 percent of bar sales. Now, wine dominates sales, and the list offers roughly 800 choices, pruned from a peak of 1,150 bottles before Sandy.

Back in the mid-1970s, few restaurants beyond fancy French places employed sommeliers. Mr. DeLissio’s title at first was beverage manager.

“The term ‘wine director’ hardly existed,” Mr. DeLissio said. “Kevin Zraly might have been the first with that title.”

Mr. Zraly was part of the team at Windows on the World, which opened atop the north tower of the World Trade Center a year before the River Café, in 1976. It was the beginning of a revolution in American dining, paralleled by rising consumption of wine and a boom in the American wine industry. 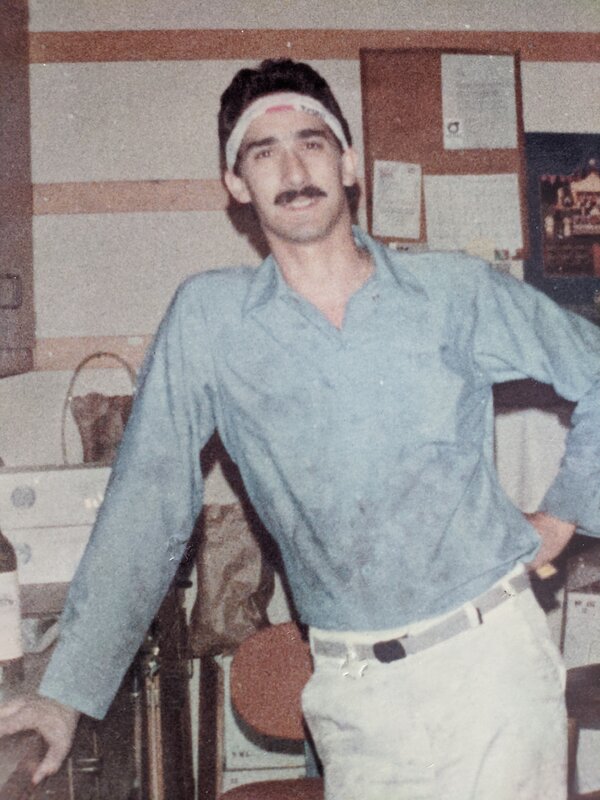 Mr. DeLissio was right there in the thick of it, traveling to California to meet and taste with producers, getting to know Napa Valley titans like Mr. Mondavi, Joe Heitz and André Tchelistcheff, a legendary Napa winemaker and consultant.

“It was very unusual back then for anybody from a top New York restaurant to come to visit,” Mr. DeLissio said. “I’m 24 years old, and I’m tasting wine with André Tchelistcheff. The people running the industry were farmers, before the big corporations bought the properties and turned Napa into a mini-Disney World.”

That Mr. DeLissio got involved with wine at all was something of a surprise, not least of all to him. He was born in Marine Park, Brooklyn, in November 1954. His father ran a neighborhood bar in Bensonhurst where wine was an afterthought.

“Wine was what my father’s friends drank when they went on the wagon,” he said. “It wasn’t considered drinking.”

Young Joey was a music major at Queensborough Community College and an aspiring rock star who played drums. His funk band, the Starbabies, even had a single, “Oh Uzunluk,” that Mr. DeLissio said charted for a couple of weeks.

Nothing came of the music business, and when he needed to get a real job, he turned to his mother, who worked in the office of Michael O’Keeffe, a restaurateur better known as Buzzy, who had just opened the River Café. With experience working after school in his father’s bar, Mr. DeLissio was hired to order beverages and, most important, he said, to make müddet nothing was stolen. He knew nothing about wine.

“None of us knew much then,” Mr. O’Keeffe said. “I used to say to some of the wine salesmen, ‘Pick your favorite five reds and five whites,’ and I took the common denominators.”

Mr. DeLissio started tasting the wines, and he found himself becoming interested. He took a wine class from Mr. Zraly, who was a great educator as well as a wine director.

“I think that was the point where I changed a job into a career,” Mr. DeLissio said.

For Mr. O’Keeffe, Mr. DeLissio’s interest was a godsend. “He picked it up so quickly, I didn’t have to do anything,” Mr. O’Keeffe said. “I just let Joey go. He was always on target. I could just relax.” 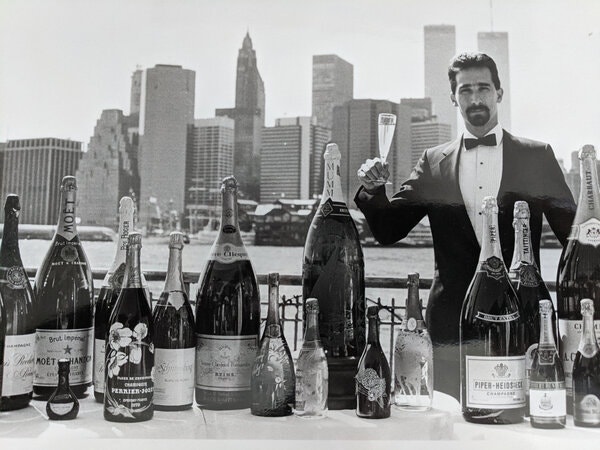 That was fine with Mr. DeLissio. “Once I got to the point where he trusted me, he left me alone,” he said. “Creative freedom is really important to me. I got to evolve the wine program, and that kept it fresh for me.”

His early interest in California wine was spurred on by the excellent 1974 vintage, which came in the middle of a series of particularly bad vintages for French wines.

“We were the first restaurant to carry Jordan, Dominus, Dunn, Opus One, Screaming Eagle,” Mr. DeLissio said. “I made my bones on California, that’s how everybody knew me.”

“I liked working with people like that,” Mr. DeLissio said. “It really was an exciting time,”

Tastes and the American wine industry changed, and so did the River Café wine list. Mr. DeLissio continued to buy high-end California wines, but as they were getting more powerful and alcoholic in the 1990s, he turned more toward European wines, building excellent selections of Burgundy and Châteauneuf-du-Pape.

He fell in love with Spanish wines, and developed a personal passion for Madeira, the Portuguese fortified wine, putting together an extraordinary collection of old and rare bottles.

“Madeira is almost like a conversation,” Mr. DeLissio told me in 2007. “It’s the most thoughtful wine there is.”

Of the California cult cabernets that he collected, he said: “We were the first to put those on, and maybe the first to take them off. The wine list used to be 80 percent California, and now maybe it’s 25 percent.”

He reaffirmed his assessments after Hurricane Sandy, which poured seawater through the restaurant, destroying the kitchen, the electrical system, a new Steinway grand piano and gushing through the wine storage room on the dining-room level, ruining a significant portion of the 10,000-bottle collection.

Some were damaged on the outside, rendering them unsellable. But they were still drinkable, which gave Mr. DeLissio a chance to taste many precious California bottles.

“Quite often, the most expensive, the most allocated, the most highly rated wines were just not worth it,” he said in 2014. “It took Sandy to make me say, ‘Man, what was I thinking?’” 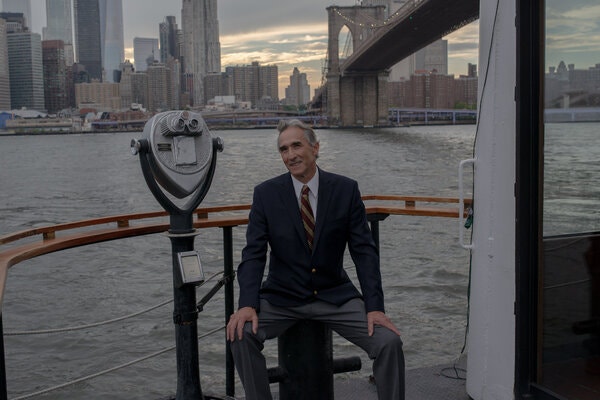 Through it all, Mr. DeLissio, lean and angular, has remained at his post, overseeing the cellar and list. As sommeliers became superstars, developing a cliquish and competitive New York culture, he preferred to keep his distance.

“Joey marches to his own tune, always,” said Daniel Johnnes, who for years was the wine director at Montrachet in TriBeCa and later for the Daniel Boulud group of restaurants. “He was never dragged into the politics of it. He’s bought to his own taste and done his own thing.”

For years, Mr. DeLissio has lived in Bay Street Landing on Staten Island, taking the ferry to work and back. He has been divorced for 20 years, and has three grown children — Krista, Joseph and Julia — and a 3-year-old grandson, Julian.

“I always considered myself a blue-collar kid in a white-collar job,” he said. “I’m still a working-class kid.”

Though he is retired, he has no plans to stop working. For years, Mr. DeLissio has nursed an ambition to write screenplays. He has finished two of them — one, he said, is about a failed baseball player who visits the Hall of Fame and winds up snowed in with a claustrophobic escort — and is working on a third.

“I’ve been a closet screenwriter,” he said. “Maybe it’s time to come out of the closet.”

As he looks back on his 43 years, a few things stick out: the camaraderie of the wine community in the 1980s, before it grew; watching diners order a second bottle of something they loved; the 25th anniversary of the River Café, when all the chefs came back to cook together.

Most of all, he’ll remember looking out the window.

“Having a glass of something, sitting at the bar when the weather was horrible,” he said. “Watching a violent snowstorm or the ice floating down the river, that was magical.”