PENSACOLA, Fla. — After the deluge brought by Hurricane Sally slowed and the powerful winds of what had been a Category 2 storm passed, many on the Gulf Coast were beginning on Thursday to see just how much devastation the storm had left behind.

Entire neighborhoods were left waterlogged, with a combination of storm surge and record precipitation having caused floods that reached higher than five feet. Rescuers had pulled families from homes and cars. Docks had been destroyed, sending captains chasing after boats, trying to tie them down to whatever they could. At least one death has been attributed to the storm.

“It’s just obviously been a very historic flood event here,” said Laura Coale, a spokeswoman for the Escambia County government, a jurisdiction that includes Pensacola, the largest city on the western end of the Florida panhandle. “Downtown is really flooded.”

Sally was defined by its erratic nature and slow speed, churning in the Gulf of Mexico at just 2 miles per hour before making landfall on Wednesday morning near Gulf Shores, Ala. The storm moved almost as slowly as it raked over land, leaving residents to hunker down for hours as they waited for it to pass. 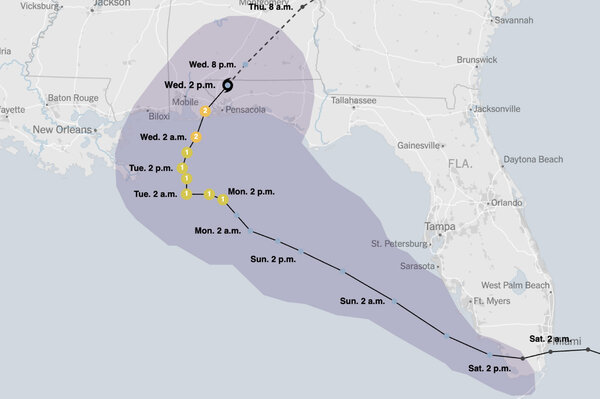 The storm has released torrents of rain on the Gulf Coast.

When many began to emerge later Wednesday, they saw that the storm had ravaged a stretch of coast around the Alabama and Florida border with an intensity that few had anticipated. The authorities said nearly 400 people had been rescued from the floodwaters by afternoon.

Homes and businesses had been ransacked by wind and water. A major bridge crossing the Pensacola Bay had a section knocked out by the storm. Many roadways were impassable because of accumulated water or blockades of fallen trees and debris. Barges had become unmoored and, according to The Associated Press, a replica of the Nina, one of Christopher Columbus’s ships, had vanished from its dock on the Pensacola waterfront.

Local officials said they had been surprised by a last-minute forecast that showed the storm shifting in their direction, after having been expected to make landfall farther west. But they swatted aside claims that they had not been ready.

Still, the authorities urged residents to stay put if they could, warning of the multitude of dangers that come in the aftermath of a storm.

Even as the storm surge recedes along the coast, at least eight rivers are expected to see major flood events into Thursday, raising water levels by several feet.

Steve Miller, a National Weather Service meteorologist, said that smaller rivers would be especially susceptible to rapid changes in water level, and that communities along the banks of those rivers could be at increased risk as late as Thursday afternoon.

Ms. Coale said the county was urging people to abide by a nightly curfew, especially since roadways were crisscrossed with downed power lines that made driving in the dark particularly dangerous. The county had no estimate of the number of structures damaged by the storm, but Ms. Coale said the damage was widespread.

The Coast Guard was sending boat teams to assist in the aftermath, and 200 members of the National Guard were scheduled to arrive on Thursday.

One person died in Orange Beach, Ala., a coastal community of some 2,500 people straddling the state line, Mayor Tony Kennon said, and another person was missing. He said search-and-rescue operations at night would be minimal because of the dangerous conditions, including large amounts of debris in the water.

The National Hurricane Center said late Wednesday that Sally had been downgraded to a tropical depression as it continued to dump torrential rainfall along the Alabama and Georgia border, reaching as high as a foot in some places and raising the threat of flash floods. The storm was expected to push on to the Carolinas, dropping several inches of rain.

As of 4 a.m. Central time Thursday, the center of the storm system was 50 miles southeast of Montgomery, Ala.About 287,000 electricity customers in Alabama and 220,000 in Florida were still without power, prompting the National Weather Service in Mobile and Pensacola to issue warnings about the proper use of generators. At least seven people died from carbon monoxide poisoning from generators during Hurricane Laura last month.

Some residents expressed exasperation as they considered the tough days ahead.

Omi Yoder and her husband moved to the Bristol Park subdivision outside Pensacola just two months ago. They bought a brick house with white siding on a cul-de-sac next to a creek; Ms. Yoder is expecting her first child, a girl, in about a month.

On Wednesday, she saw the place had filled up with about two feet of water. The nursery they had been working on was ruined.

They had seen the water rising up from the street and were able to scramble and move some possessions upstairs. But the water ruined carpets and other things, which they and some friends were dragging out to the curb late Wednesday afternoon.

Richard Fausset reported from Pensacola, Rick Rojas from Atlanta and Will Wright from Jersey City, N.J.

Hopes and dreams on hold: the impact of COVID-19 on niche sports