CREOLE, La. — Mary Canik returned after Hurricane Laura to find her hometown destroyed again. The grocery store she owns with her husband had been ransacked by a wall of water, its contents a mangled mess blown onto the gravel parking lot. Her home, which had been rebuilt after an earlier hurricane and lifted 14 feet 9 inches off the ground, was nothing but posts and a cement slab.

On a recent sweltering afternoon, her thoughts drifted back 15 years. She remembered how wrecked she felt after Hurricane Rita, how excruciating it was to see how her community had been the battered target of storm surge and pulverizing winds. She remembered how easily the tears came.

This time, she was just tired.

“We have this,” said Ms. Canik, sitting in the shade outside the damaged feed store she and her husband, John, bought after Rita and turned into a market selling fresh meats, produce and soft-serve ice cream.

There was a time, Ms. Canik said, when leaving the parish had been inconceivable. Now it felt possible.

Ms. Canik has lived for decades in Cameron Parish, but exasperation was tugging at her. Similar frustrations weighed on just about everyone in this coastal community, a vast and sparsely populated spread of marshy terrain in Louisiana’s southwest corner that has been hit by three epic hurricanes since 2005.

This week, residents were watching the forecasts yet again, as Tropical Storm Beta dumped some 18 inches of rain in parts of Texas and briefly had the parish squarely in its path.

Cameron Parish is tightknit and insular, a place where family wealth was often held in parcels of land handed down one generation to the next. But those bonds are being tested as a changing climate has barraged the Gulf Coast with storms that have been more frequent and more furious.

Now, in the weeks after Hurricane Laura submerged neighborhoods, obliterated businesses and unearthed coffins, many residents have begun agonizing over what feels like an impossible choice: rebuild yet again, or this time leave for good. 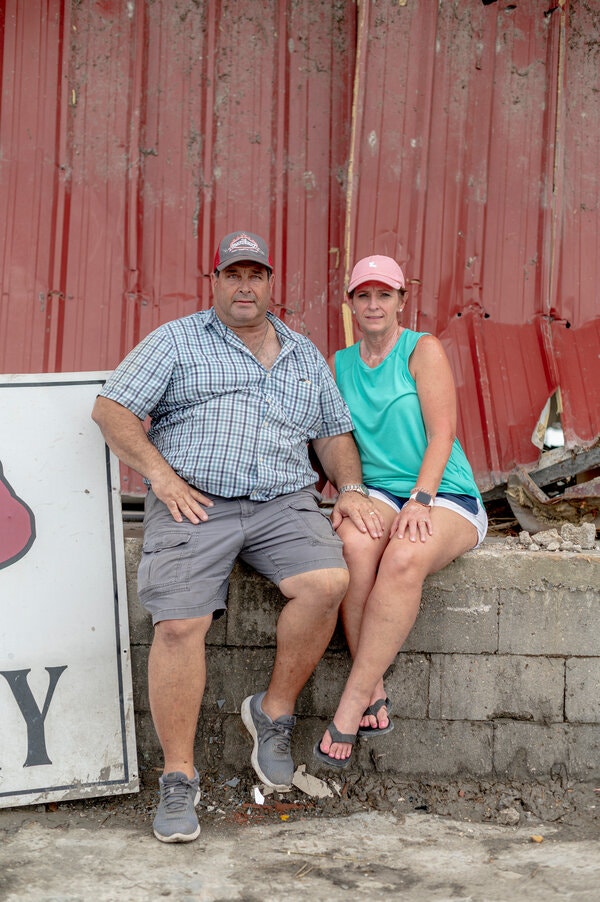 “This is worse than Rita, and Rita was worse than Ike,” Kevin C. Dupke, the Cameron Parish coroner, said of the most serious hurricanes to hit in recent years, with Ike pummeling the coast in 2008, three years after Rita. He had heard from many who were fed up. “We can’t do it again,” he said they told him.

The Gulf of Mexico has long been an engine of opportunity, powering an oil and gas industry that is a backbone of the region’s economy and a provider of steady, decent-paying jobs. For even longer, fishermen and shrimpers have relied on it for their livelihoods.

Some call it Louisiana’s outback, spacious enough for nature, people and industry to coexist. Wetlands that hundreds of species of birds migrate through give way to clusters of trailers and modest family homes. Alligators bask along a two-lane route and often end up as roadkill. Fishermen push back into the bayous off Sabine Lake, the galvanized towers of petrochemical plants forming the skyline behind them.

Yet it has also been a source of heartache, as deadly and devastating storms have torn through and as Louisiana has waged a long and costly war over an eroding coastline where the Gulf has claimed territory at an alarmingly aggressive pace. Over the years, it has swallowed hundreds of square miles of wetlands, imperiling a constellation of communities in danger of being engulfed.

The calamitous toll of climate change is expected to provoke an exodus around the world, as millions are displaced by rising sea levels and heat climbing to uninhabitable temperatures. A brutal hurricane season, with enough named storms this year to run through the alphabet, has stoked fears across the Gulf Coast, but those anxieties are especially acute in Cameron Parish. 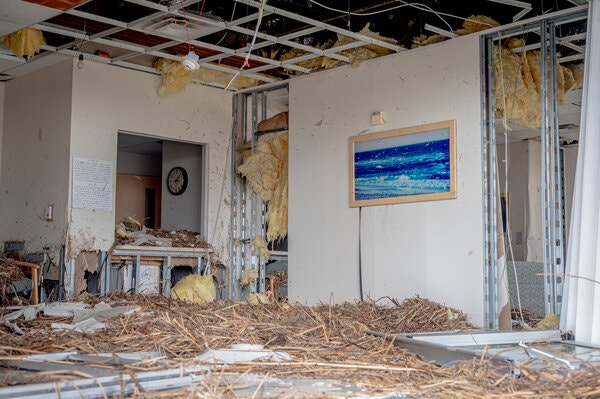 The parish, in terms of landmass, is Louisiana’s largest, but it is the third smallest by population, which had evvel eclipsed 10,000 but has trickled to just under 7,000. After Rita, the population dropped by roughly 2,000 people, according to census veri.

The region is no stranger to storms. Stockpiling canned goods, bottled water and batteries is a springtime ritual, along with the hurricane tracking charts handed out at supermarkets. Boarding up windows and evacuating are a matter of routine.

Rita, a Category 5 storm while in the Gulf of Mexico, had been catastrophic. But it also signaled the beginning of an onslaught of punishing storms, with Ike and Laura, which arrived in Cameron Parish on Aug. 27, as the most damaging.

Plenty of people just rebuilt higher. The public library in the community of Cameron looked like a fortress on stilts, built after the parish’s main branch had been destroyed by Rita and then again by Ike.

But many others moved — either to the subdivisions and neighborhoods straddling the parish line, just below Lake Charles, or outside the coastal region entirely. Dr. Dupke, the parish coroner, said he knew of people who fled toward Shreveport, or into Texas and farther. It was disheartening, he said, to see neighbors who felt compelled to give up on their hometown. “Then again,” he added, “they’ll bring to Arkansas the right way to boil shrimp.” 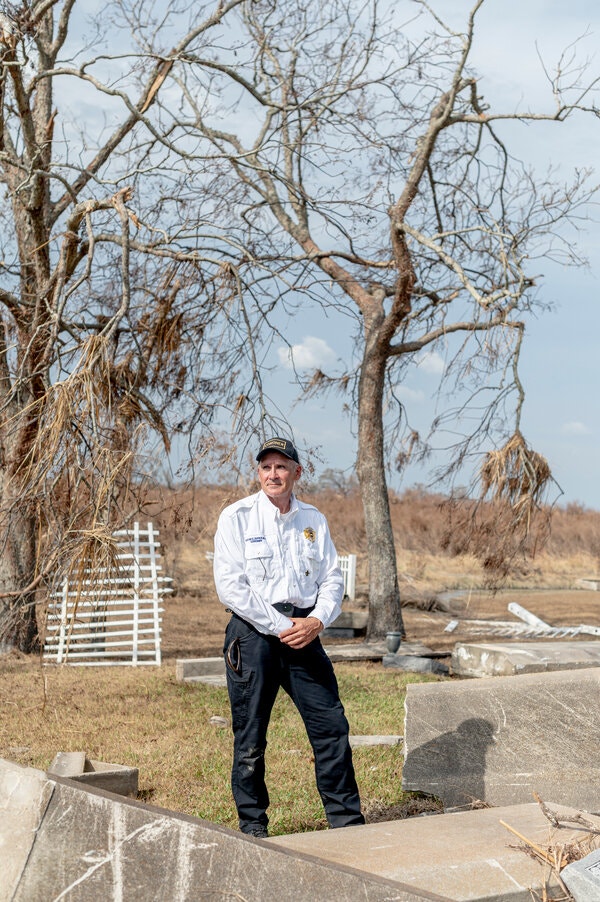 Yet he could not blame them for leaving. No one could. The recovery was onerous: maneuvering a labyrinth of bureaucracy for government aid and filing insurance claims, and haggling with contractors for repairs. It was physically and emotionally taxing, and financially as well. Residents were bracing for insurance rates to soar, if their property could be insured at all.

“It’s a truck note,” Andrea Miller-Billiot said of the current premiums for her mobile home, which had busted windows and holes in the siding after Laura. “By the grace of God, it’s still standing.”

As soon as the hurricane passed, Dr. Dupke set off in his truck to check on every cemetery in the parish. The storms upend graves, scattering coffins across fields and stretches of wetlands and carrying them off into bayous. More than 700 graves had been disturbed in both Rita and Ike. Some take years to find. Others surfaced in the Intracoastal Waterway several months later.

Dr. Dupke, the only medical doctor living in the parish, usually works out of the small hospital near Cameron that is staffed by two physicians who drive in from out of town. But Laura’s storm surge broke through the windows and bombarded the center with mud and debris. Now, he has been doing the job out of his pickup, commuting from a friend’s house in Lafayette.

“We’re on our knees,” he said of the parish as he surveyed the devastation. 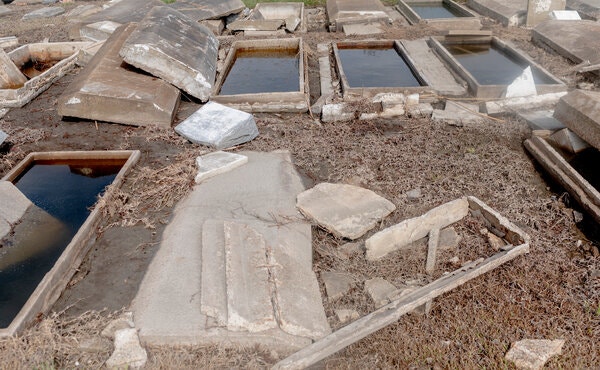 In Cameron, the parish seat, he pointed out a seafood shack that had been thrown about 100 yards from its foundation, landing beside a boat about as tall as the bank it was leaning against.

He was something of a rarity: a Connecticut native, a cardiologist by training, who ended up liking the parish and staying. He found the people warm and generous and their food well seasoned.

“They’re a can-do people,” he said. “They depend on themselves and not so much the government.”

He had lost his home during Rita and was still in the process of rebuilding, living in a recreational vehicle, when Laura hit. He had gotten as far as installing the foundation, with 20-foot-high posts. By his measurement, the storm surge reached just 17. He decided he would keep building.

The intersection that constituted downtown in Creole, an unincorporated community, had been the only place for miles with a gas station and a joint to eat boiled shrimp and snow crab, play the poker machines and dance on a patio with a cold beer. 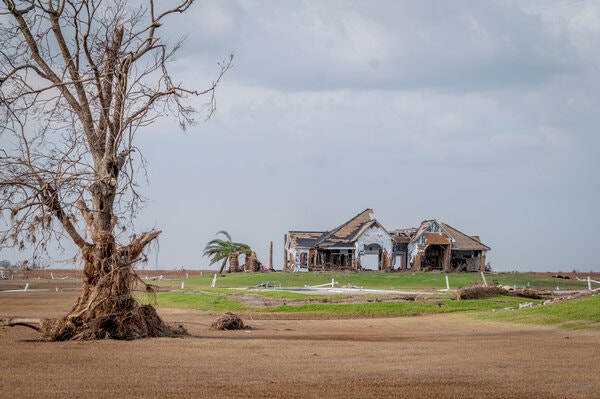 That was all gone.

Down the road at Canik’s Grocery, the walls and roof had been blown in and the inside had largely been wiped out. In one stroke of good fortune, the ice cream machine survived.

Before the storm, the store had turned a corner. For the first time, it was making a profit, a trickle-down benefit of the investment in liquefied natural gas facilities nearby and the jobs they created.

At one point, John Canik said, his bookkeeper told him he was losing $160 a week. But it filled a need. If a customer requested something, the owners would stock it. The store was also a gathering place that hosted fund-raisers for the high school’s 4-H Club and people in the community who had cancer.

After the storm, it was still a gathering place. Palettes of bottled water had been stacked on the gravel, and volunteers handed out sandwiches and snacks. Portable restrooms had been set up.

The talk was of the people who would be returning and those who would not: The owner of the seafood shack in Cameron was not coming back. And a woman who worked for another small grocery store about 20 miles away reported that her bosses were not either. “It’s too much,” she told Ms. Canik. “They’re done.”

Ms. Canik nodded. She understood. But the pull of home was not quite ready to let her go. 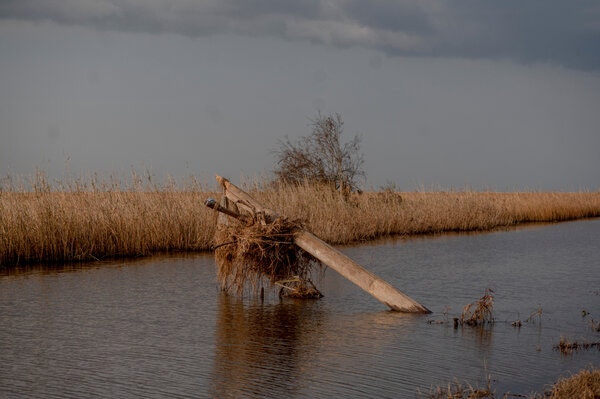