Executives overseeing the development of a long-disputed copper and gold mine in Alaska were recorded saying they expected the project to become much bigger, and operate for much longer, than outlined in the proposal that is awaiting final approval by the Army Corps of Engineers.

The executives, who were recorded in remote meetings by members of an environmental advocacy group posing as potential investors, said the project, Pebble Mine, could potentially operate for 160 years or more beyond the current proposal of 20 years. And it could quickly double its output after the initial two decades, they said.

“Once you have something like this in production why would you want to stop?” Ronald W. Thiessen, chief executive of Northern Dynasty Minerals, the parent company of Pebble Limited Partnership, said in one of the recordings. Mr. Thiessen said local villages in the area would support extended operation of the mine because of the tax money they would receive. “It’s $10,000 per man, woman and child,” he said. “They want that to go away? No.”

The Pebble project, a major open-pit mine that would be dug in a remote, sparsely populated part of Southwest Alaska, has been fought over for a decade and a half by those who say it will provide much-needed economic development and others who argue it will cause environmental harm, especially to salmon that are the basis for subsistence fishing by Alaska Natives and the wild salmon fishery in Bristol Bay, one of the world’s largest.

The Corps of Engineers issued a final environmental impact statement last month that found that the project as proposed would not cause “long-term changes in the health of the commercial fisheries.” The Corps is expected to make a final decision on a permit for the project within weeks. That would allow construction to proceed after state permits are obtained, which is expected to take three years.

In another recording, Tom Collier, chief executive of the partnership, said that opening Pebble could help pave the way for another large project, the Donlin gold mine, some 175 miles away across the tundra. By reducing the cost of building a road to that mine, which is being developed by other companies, the Pebble project could help make it economically viable.

“If you flip the Pebble switch on it’s likely that you may also be flipping on the Donlin switch,” Mr. Collier said. 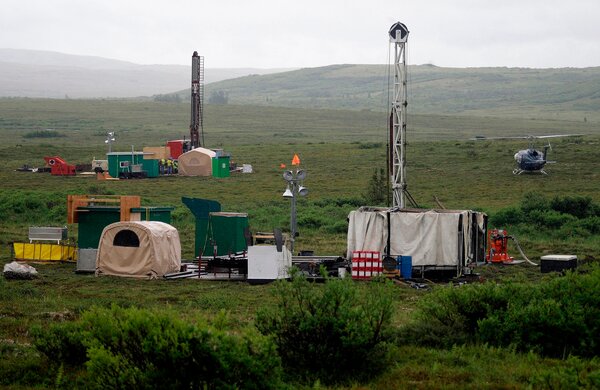 Last week, President Trump, whose son Donald Jr. is among those opposed to the project, tweeted that “there will be no politics” in the decision-making process.

The recordings were made in August and September by Environmental Investigation Agency, an advocacy group based in Washington, D.C., that conducts undercover operations to expose what it says are yasa dışı activities or other misdeeds. Videos and transcripts of the meetings were provided to The New York Times and other organizations.

“In private, they explained to our investigators how, evvel an initial permit gets past regulators, their plans for massive expansion will be unstoppable,” said Alexander von Bismarck, the group’s executive director. “We think the public deserves to hear that.”

In a statement, Northern Dynasty and the Pebble partnership said that “there are some pretty questionable ethics at play” by the group that made the recordings.

The companies said that for several years they had taken the position that there would be potential for subsequent phases of development. “However, we currently have no plans for any development beyond 20 years of mining,” they said.

“We do not believe Mr. Collier or Mr. Thiessen said anything to Mr. von Bismarck — or whoever it was that surreptitiously videotaped their meeting — that is inconsistent with these positions.”

In the recordings, Mr. Collier said that expanding the mine would not be unusual. “In America there’s not a single major mine, and there certainly isn’t a major oil field, that didn’t start out small, smaller than it has grown,” he said.

He also said the state of Alaska would support expansion because it would gain revenue from the mine. “I bet you that the state’s going to be hounding on us to do an expansion before we’re ready,” he said.

In another recorded meeting, Mr. Thiessen raised the possibility that perhaps over a century, more mines could be built in the area. Pebble has mineral rights to 425 square miles, he said, and tests had suggested the presence of ore at some other sites. “But we don’t talk about it too much, because right now we want people to focus on only Pebble.”

Alannah Hurley, executive director of United Tribes of Bristol Bay, a Native group that opposes the mine, said the recordings were “very clear evidence that this company is not telling the truth.”

“They’ve lied to everyone about what this project looks like and what their intentions are,” she said, adding that “it’s time now for our elected leadership to stand up for Alaskans and stop this corrupt process.”

Chris Wood, president and chief executive of the conservation group Trout Unlimited, said the mine developers’ intentions as revealed in the recordings were bad news for the area’s salmon and the people who depend on them.

“This is an incredibly pristine area,” he said. “If you industrialize the landscape, and develop mining there for a hundred years, you’re basically writing off the salmon.”

In one of the meetings, Mr. Thiessen said they had scaled down the original proposal when they began the process of obtaining a permit from the Corps, a requirement under the Clean Water Act.

“We said, ‘Now how do we improve our chances of getting a permit?’ Because people always have anxiety about resource development, especially mines,” he said. So they reduced the output of the mine, he said, which reduced the project’s footprint to about five square miles, and its operating life to 20 years.

“But during that 20 years, you’re going to make the application to continue for another 20,” Mr. Thiessen said.

In prepared testimony before Congress last October, Mr. Collier refuted the suggestion by a former regional administrator of the Environmental Protection Agency that the permit application for a scaled-down proposal was “the camel’s nose under the tent.”

“Pebble has no current plans, in this application or in any other way, for expansion,” Mr. Collier said.

Last month, after issuing the final Environmental Impact Statement, the Corps of Engineers said that before a final decision was made the developers had to come up with a plan to compensate for several thousand acres of wetlands that would be destroyed by the project.

In the recordings, the executives said development of a mitigation plan, which would likely aim to protect 15,000 to 20,000 acres of wetlands, was well underway. “We’re in pretty good shape,” Mr. Thiessen said.