Want this delivered to your inbox each day? Sign up here.

Jack Dorsey’s financial company — known for its credit-card readers, Cash payments app and Square Capital lending program — plans to announce today that it will invest in an array of funds and lenders focused on underserved communities of color, joining a growing number of big businesses taking on racial economic inequality.

Square promises to invest $100 million, or about 3 percent of its cash, in four chunks:

• $25 million in The Keepers Fund, a vehicle sponsored by the National Bankers’ Association meant to invest in M.D.I.s.

• $25 million in the Black Economic Development Fund, which was created by the Local Initiatives Support Corporation to support Black-led banks and businesses.

• $25 million will be reserved for future programs.

These types of investments “fuel economic justice and opportunity in underserved communities and support a broadly shared prosperity throughout the country,” Maurice Jones, the C.E.O. of the Local Initiatives Support Corporation, said in a statement.

The initiative grew from a $5 million move last year. Square deposited the money with C.D.F.I.s last year, Amrita Ahuja, Square’s C.F.O., told DealBook’s Michael de la Merced. That plan was devised by Square’s treasury and government relations teams, with senior executives only learning about it later. (“Our leadership team were surprised — and loved it,” she said.)

• Mr. Dorsey, who has publicly supported the Black Lives Matter movement, has personally pledged $1 billion to relief programs tied to the pandemic. And the company’s Square Capital division distributed more than $870 million in small-business loans through the federal government’s Paycheck Protection Program.

A plan to drastically boost funds for Black communities took shape this summer, Ms. Ahuja said. Though Square had intended to expand its efforts since early in the year, the plan took on new urgency as executives saw veri on how badly Black communities were hurt by the pandemic.

• What gave Square the confidence to act, Ms. Ahuja said, was having a solid balance sheet. (A $1 billion convertible bond offering in the spring helped.)

The move fits Square’s corporate mission of helping businesses grow through finance. “Part of the reason that Square exists is for this very purpose,” Ms. Ahuja said. “It’s not just doing good in the world, it’s good business, too.” 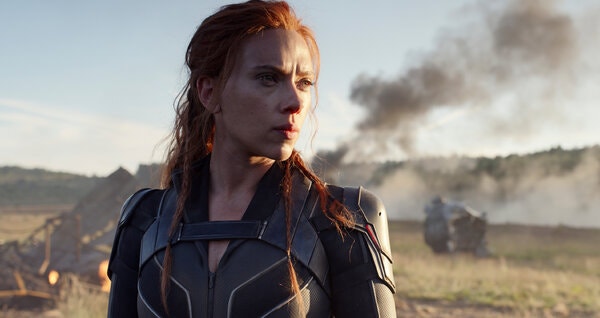 TikTok filed for an injunction to block President Trump’s ban. The company asked a federal judge in Washington to stay the Trump administration’s order to remove its app from the Apple and Google app stores. Meanwhile, it has applied for an export license from China for its algorithm, a key step in sealing its deal with Oracle and Walmart. And here’s how TikTok factors into the retail giant’s future.

Tesla owners were locked out of their cars. An hourlong network outage disabled the app that gives drivers control over their high-tech electric vehicles. “This kind of thing will become increasingly common in the future,” the futurist Richard Watson told DealBook, musing that even our toasters and windows may someday be beyond our control. The incident also came at an awkward time for Tesla, whose shares fell 10 percent yesterday after investors were underwhelmed by its new battery technology.

JPMorgan Chase is reportedly set to settle a market-manipulation case for $1 billion. Bloomberg reports that the fine would resolve an investigation into accusations of “spoofing,” or flooding the market with fake orders to move prices, in markets for metals futures and Treasury securities.

Disney delayed several blockbuster movie releases. With audiences largely staying away from movie theaters, the studio pushed back Marvel’s “Black Widow” to May, and Steven Spielberg’s remake of “West Side Story” to December 2021.

Goodbye, Uncle Ben. Mars announced that it will rebrand Uncle Ben’s rice to Ben’s Original and remove the image of an older Black man smiling on the box. It’s the latest example of companies revamping or retiring brands criticized for trading on racist stereotypes, including Aunt Jemima, Cream of Wheat and Mrs. Butterworth’s. 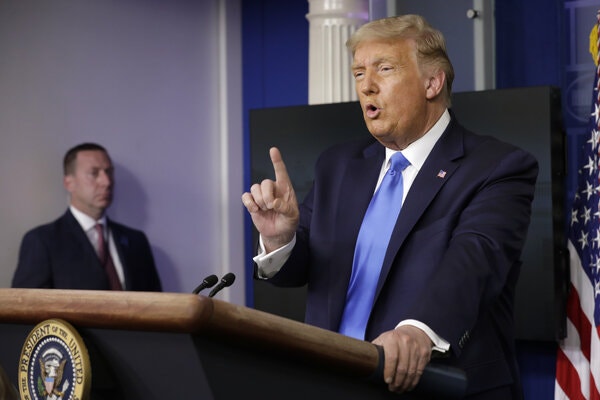 ‘We’re going to have to see what happens’

At a news conference last night, President Trump refused to endorse a “peaceful” transfer of power if he loses the election in November, responding to the question with a noncommittal, “We’re going to have to see what happens.” The prospect of a contested election result is a major risk for businesses, markets and the economy, already factoring into some deal makers’ plans.

“There won’t be a transfer, frankly. There will be a continuation,” Mr. Trump said when asked about whether he would accept the result if he lost. He again raised concerns about the reliability of mail-in ballots, without citing evidence.

It might be more than rhetoric. In The Atlantic’s current cover story — “The Election That Could Break America” — Barton Gellman reports, citing unnamed sources, that Mr. Trump’s re-election campaign has held discussions with state officials about potentially bypassing election results:

Members of a union representing workers at Kroger-owned supermarkets in the Seattle area have filed complaints with the National Labor Relations Board, arguing that managers improperly forbade them from wearing Black Lives Matter buttons. It’s one of many companies dealing with the thorny issues around social, political and protest symbols in the workplace.

The union argues that buttons are legally protected guild insignia. The U.F.C.W. 21 union spokesman Tom Geiger told DealBook that Kroger’s claim about its dress code was unfounded. “The union for years has had and produced buttons that members have worn without interference,” he said. Kroger, the largest U.S. supermarket operator, announced a $5 million fund in June to “support the advancement of racial equity and justice.” Kroger did not respond to a request for comment.

How other companies are addressing this question: Some have created their own insignia that employees can wear to ensure consistency — and a measure of control — of potentially contentious messages, with mixed results. One of the Kroger-owned chains designed wristbands for employees to wear to show their allyship, with messages like “Standing Together.”

• American Airlines and Delta designed their own Black Lives Matter pins that crew can wear.

• Starbucks first banned employees from wearing Black Lives Matter shirts and pins, then reversed course and made its own T-shirts with the message after facing calls for boycotts.

• Goodyear drew President Trump’s ire when social media posts suggested that the company supported wearing Black Lives Matter symbols but not the pro-police Blue Lives Matter message; the company stressed that both were acceptable, as messages about “racial justice and equity issues,” but that messages explicitly supporting candidates or political parties were not. 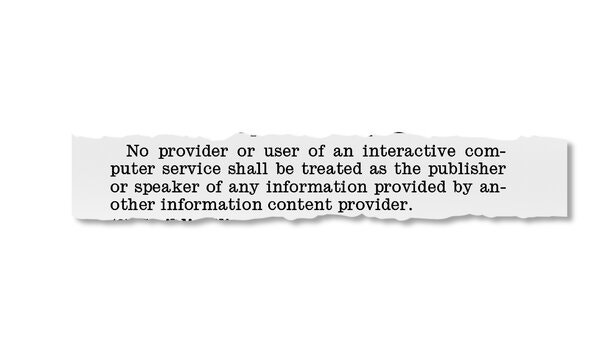 Has the Communications Decency Act outlived its use?

The Justice Department unveiled a proposal for rewriting Section 230 of the act, which would weaken the yasal protections for internet companies around user-posted content on their platforms.

The draft legislation would make it riskier for companies to remove offensive content, requiring them to show an “objectively reasonable belief” that the material promoted terrorism or violence or was otherwise unlawful. That’s in line with claims from the Trump administration about the alleged censoring of conservative viewpoints. It would also hold companies legally liable if they intentionally promoted harmful content, or refused to act on complaints.

The proposal received a mixed reaction. Coming so close to the election risks the move becoming “so bogged in the partisan muck that there is no there there,” writes our colleague Shira Ovide of the On Tech newsletter: 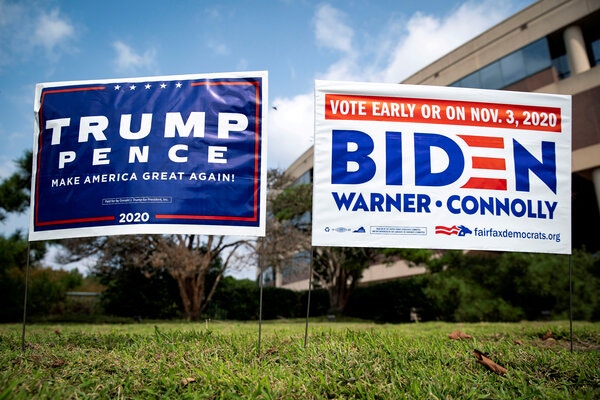 The topics for the first presidential debate, to be held on Sept. 29, were announced this week. We asked readers for the best questions to ask, and you responded in droves. Some of the responses:

“What are your thoughts on imposing term limits on Supreme Court justices?” — Jay Tuckerman in the Philippines

“What is your plan to reduce climate pollution in order to protect the long-term stability of our economy?” — Dominique Browning in New York

“Given the looming defaults in debt securities tied to the hotel industry, do you believe a federal bailout or ‘debt jubilee’ is needed to prevent a collapse in the market?” — Aaron Koral in Tucson, Ariz.

“In the interest of transparency, will you commit to releasing your tax returns prior to the next debate?” — Mary Clark in Loveland, Colo.

“In corporate America, most companies force a C.E.O. to retire at either 65 or 67. If an age limit was imposed on the presidency, what age should it be?” — Mark Banholzer in Park City, Utah

• WeWork agreed to sell control of its business in China to an investor, Trustbridge Partners. The unit has suffered during the pandemic. (Reuters)

• Penske Media, the owner of Variety, agreed to take over daily operations of Hollywood’s other big trade publication, the Hollywood Reporter, as part of a joint venture. (Variety)

• Stay-at-home orders are the most effective way to reduce Covid-19 infections, according to a new study, and do less economic damage than closing nonessential businesses. (Bloomberg)

• The Silicon Valley mogul Reid Hoffman is spending millions to help elect Joe Biden — but some Democrats resent his efforts to transform their party. (Recode)

• Google is developing a hybrid work plan, after internal surveys showed most employees don’t want to come to the office full time. (CNBC)

• Americans have lost $145 million to coronavirus-linked frauds, according to the Federal Trade Commission. (NYT)

• Wall Street is betting that the suburbs of the future will be full of renters. (Bloomberg)

Zurich: 14 people injured after truck collides with tram in Switzerland