BERKELEY, Calif. — There is more than college football. At a place like the University of California, Berkeley, football is merely one of 30 sports currently on pause.

Football gets the attention, and the money, which is why the Pac-12 Conference may decide, as early as this week, to jump-start its football teams after announcing in August that all sports were postponed until January, at least.

That decision will have huge ramifications — for fans, for budget directors, for the signal it sends about risk-reward calculations and priorities at top American public universities.

But in athletic departments, football is just a fraction of the concern. At Cal, there are 850 student-athletes. About 750 of them do not play football. 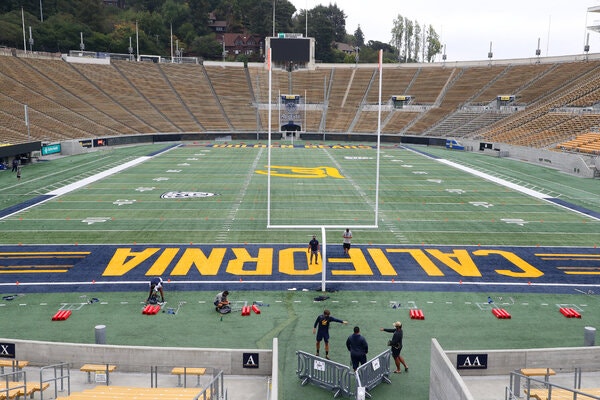 Cal is where The New York Times is camped out this semester, virtually and on campus, to witness the unique challenge of reopening a major-college athletic department during a pandemic.

The struggle varies for each season and for each sport. To highlight some of those differences, we looked into three sports: one in fall (women’s volleyball), one in winter (men’s basketball) and one in spring (men’s and women’s track and field.)

The Cal women’s volleyball team was coming off a 20-10 season, and hoping to build on that in 2020, Sam Crosson’s second season as head coach.

“We had championship aspirations,” Isabel Potter, a senior setter, said. “We were going for everything.”

But as summer came and the pandemic dug in, everything shuddered, then stopped. Promise went pfft.

As with football, it became clear in July that the season would be delayed. Training camp would not begin in early August, as expected. The nonconference season was eliminated to buy more time. 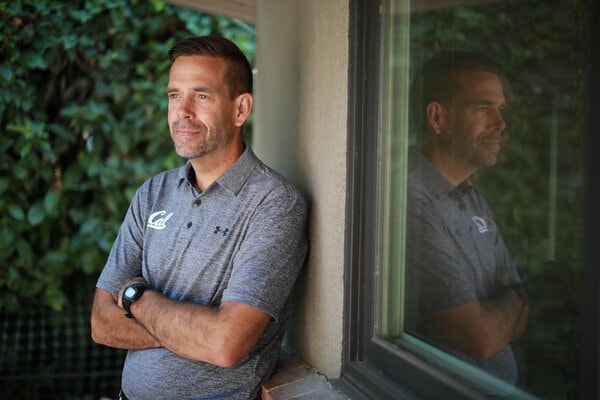 The big news came on Aug. 11: The Pac-12 announced there would be no fall sports. Football got the headline, but among those sports also postponed indefinitely were men’s and women’s soccer, cross-country, field hockey, men’s water polo — and volleyball.

Two of Cal’s top volleyball players, the all-conference stars Preslie Anderson and Lauren Forte, are scheduled to graduate in December. With the possibility that their next chance to play might not arrive until the fall of 2021, they plan to move on to graduate school, taking with them their final years of eligibility — Anderson to Baylor, Forte to Florida.

“None of us predicted this to happen, and obviously they would have wanted to play the season for us this fall if they could have,” Jessica Houghton, the team’s libero, said. “But they’ve got to figure their lives out in other ways.”

A rise in athletic transfers is a fallout from the pandemic-induced interruption. A less publicized issue is that it throws athletic eligibility and academic progress out of sync.

Academically, Houghton is a senior who expects to graduate in May; as an athlete, she is a junior. Since the coming season will not count against eligibility, per the N.C.A.A., the fall 2021 season will be her junior season athletically.

Will she get into Cal’s graduate program so she can continue playing at Berkeley? Does she go to graduate school elsewhere, and play there? Or does she move on, leaving volleyball behind for good?

“I’m still figuring it out,” Houghton said, “but there are no guarantees I can be at Cal.” 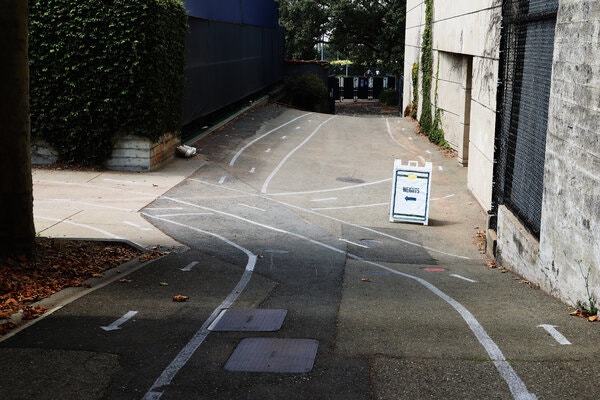 The N.C.A.A. will temporarily permit colleges to exceed usual scholarship limits (it is 12 in women’s volleyball), but schools must absorb the costs. At Cal, that comes to about $60,000 per athlete on scholarship.

“There’s going to be some fallout from that,” Crosson said. “We’ve got to go through eligibility, scholarships, kids that have redshirted already. You’re trying to work out the academics, the graduation times. What does that mean for future recruiting?”

Last week, the N.C.A.A. gave preliminary approval for other fall sports to start after Jan. 1. Volleyball is planning for a Jan. 22 start, with national championships in April.

But there are no schedules, no standardized protocols for travel, no plans for the kind of intersectional play that the N.C.A.A. uses to compare teams to determine postseason bids. What if Covid-19 cases spike this winter?

For now, most of the volleyball players, including Cal’s six incoming freshmen, remain scattered around the country. They are taking online classes and connecting through regular Zoom meetings.

Crosson is finding new ways to build team chemistry. He is assigning books (Malcolm Gladwell’s “Outliers”), movies (“Fight Club,” “Good Will Hunting” and “Moneyball”) and even songs (Bob Marley’s “Could You Be Loved” and Jimi Hendrix’s “If 6 Was 9,” among them) to spark discussions.

Maybe, around the first of the year, volleyball will begin. Maybe.

“It’ll be a different team, for mühlet,” Houghton said. “That’s kind of sad. We’ll never know what could have been had we played in the fall.” 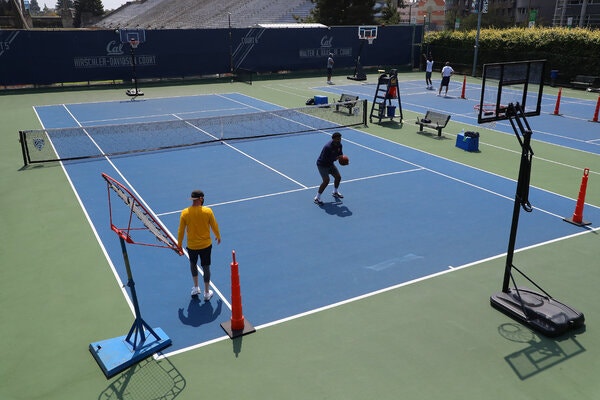 On the tennis courts, past the temperature testing station, was the men’s basketball team, looking a bit out of place under the warm September sun. Its season might start in late November. That is the latest plan, in a year when plans seem written by Etch A Sketch.

Normally, basketball is played and practiced in a gymnasium, amid the echo of voices, dribbles and shoe squeaks. But with indoor gyms, locker rooms and weight rooms off-limits because of health guidelines, the home of Cal basketball is the on-campus Hellman Tennis Complex.

Two courts are temporarily taped with basketball lines — for 3-pointers, free throws and out of bounds. At each end is a portable hoop, the type usually spotted in driveways. The tennis court is substantially shorter than a regulation basketball court. The women’s team sometimes practices a couple of tennis courts away. 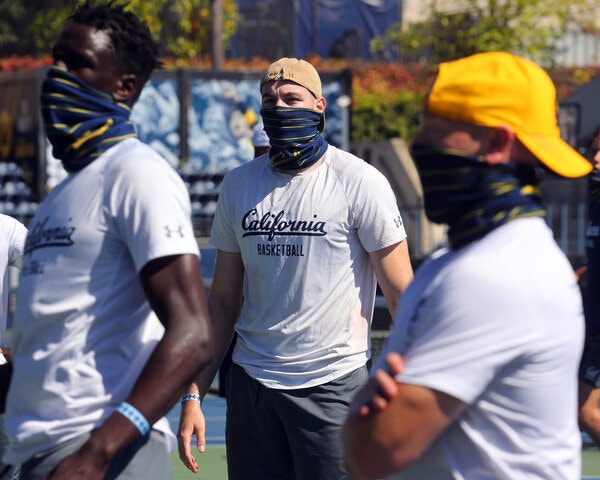 “We have a court, we have a hoop,” said Grant Anticevich, a senior forward. “Even if it’s outdoors, I can’t complain.”

California, and the city of Berkeley in particular, has imposed some of the tightest restrictions in the fight against the coronavirus. That explained why everyone was masked, despite being outside. Players can now pass the ball (sharing equipment was not allowed until recently), but there are no scrimmages, not even one-on-one games. That would violate social-distancing protocols.

Ahead is a schedule not yet created. Gone is a recruiting season that never happened. In between are no-touch basketball workouts on a tennis court and weight lifting sessions in baseball batting cages.

“It’s a matrix right now,” Coach Mark Fox, in his second season after tenures at Georgia and Nevada, said on Monday. “It’s a fun challenge. But I don’t want to do it again.”

The last time the Cal men’s basketball team played a game was in March, when it beat rival Stanford in the Pac-12 Conference tournament. Before the Golden Bears could play again, the tournament was stopped.

“The positive we took away from is to say, ‘OK, we ended the season with a W on a neutral site against our rivals Stanford,’” the sophomore guard Joel Brown said. “Now it’s just something for us to build on going into this season.”

When will that be?

After the Pac-12 said it would delay sports until Jan. 1, Cal turned its focus from fall sports to winter ones like basketball, gymnastics and swimming and diving. 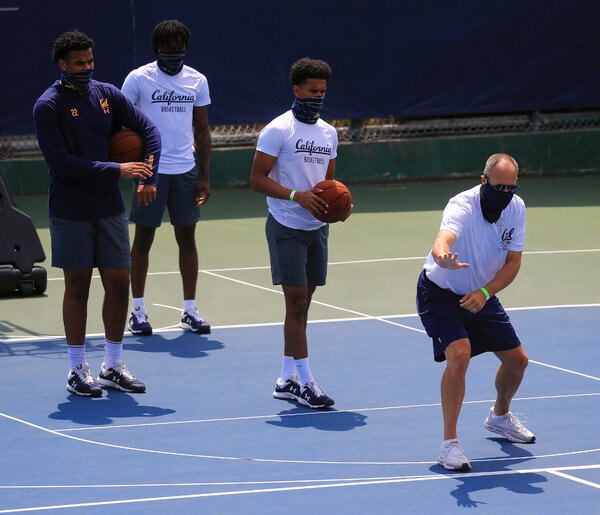 The N.C.A.A. recently said that basketball games could start on Nov. 25. But specifics are unclear. Nonconference games? Travel? Fans?

Will Cal’s teams still be practicing on tennis courts in November?

Players and coaches see news reports and social media posts of other teams scrimmaging in gyms, as if everything were olağan. Maybe it is a competitive advantage for those teams. Maybe it is one, unpredictably, for Cal.

“We’ve got to be thankful for the life we have,” Brown said. “I’d rather be someplace I feel safe.” 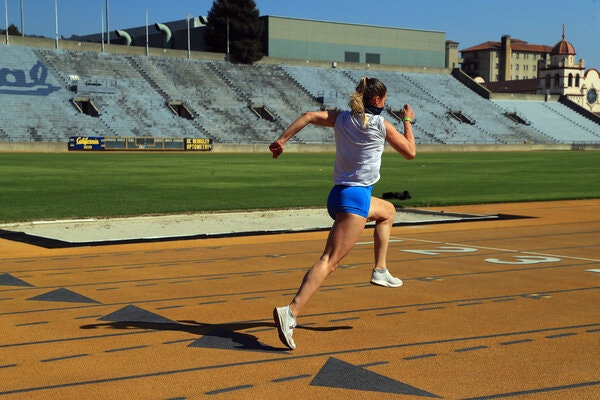 The horizontal jumpers, as long jumpers and triple jumpers are called, were back on the track on Monday, running sets of short sprints. A couple of throwers, hurling hammers and other heavy equipment, practiced nearby. Their grunts were punctuated by divot-popping thuds on the grass.

“I haven’t seen these guys since the first weekend in March,” said Robyne Johnson, Cal’s director of track and field and cross-country. “And the new kids, I have to find out what they can do.”

This week brought the first workouts for a team with low-key hopes for an indoor season this winter. About half of the Cal track team’s 100 athletes are in Berkeley. Some, like the hammer thrower Camryn Rogers, the 2019 national champion, arrived last weekend and were immediately tested for the coronavirus and placed in a seven-day quarantine. Evvel that ends, they will be tested again before starting workouts. 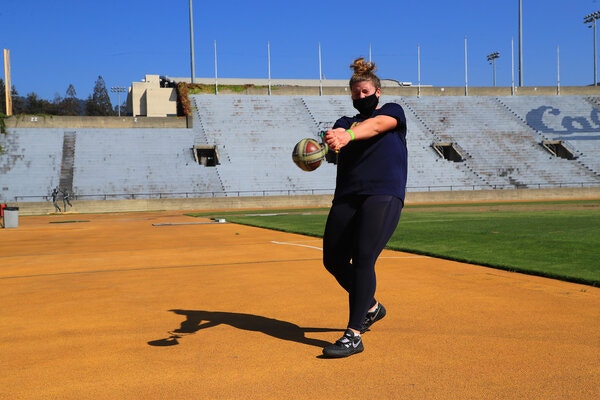 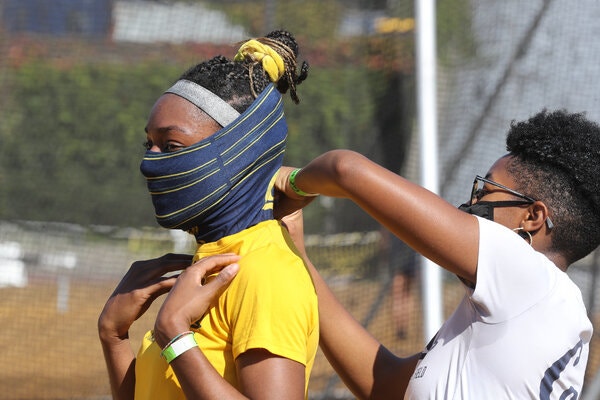 The coed sport of track and field is particularly complex to untangle because seasons and athletes blend. Most athletes compete in both the winter indoor season and the spring outdoor season. Distance runners also compete in cross-country in the fall.

Now cross-country is tentatively planned from Jan. 30 to March.

It all creates questions, small (should cross-country runners simultaneously compete indoors?) and large (can meets with dozens of schools and hundreds of athletes be conducted?).

Johnson is not convinced there will be an indoor season. The West Coast, with its mild climate, has few indoor tracks, meaning Cal would have to travel to meets with nonconference opponents.

Conferences will have to decide how comfortable they are mingling together. Athletic directors will have to decide if the expense is worth it, given the budget crises their departments face — including at Cal, where about half the $100 million in annual revenue comes from football. Epidemiologists project case numbers for the coronavirus could grow through the winter. 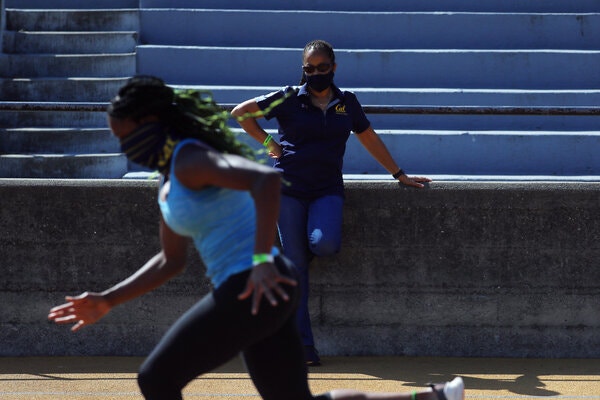 In March, two Cal athletes were at the indoor national championships in New Mexico when word trickled in: The meet was canceled. Soon, the outdoor season was wiped out, too.

The shot-putter Joshua Johnson (no relation to the coach) is one of the athletes who will never know what might have happened. He returned to Berkeley after the meet was canceled, went to work out and was shooed away as the university locked down.

He spent the rest of spring and summer at home in Southern California, except for a quick June trip to Berkeley to grab his belongings when his apartment’s lease expired. He found it hard to find places to practice throwing heavy implements.

“I was able to like go to my local high schools, but then as this became more and more serious, they actually shut down the high schools,” he said. “I’d try to get there early in the morning or late in the evening trying to miss the cops, but they would show up and be like, ‘Yeah, you have to get off school grounds.’” 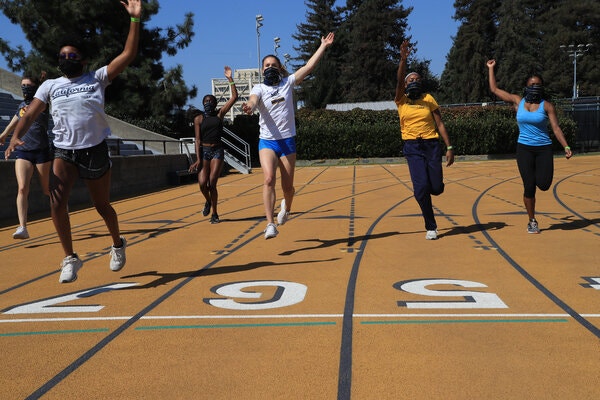 Now back in Berkeley, under quarantine, his roommate is Rogers, the women’s hammer throw champion from near Vancouver, British Columbia. Last spring, she hoped to successfully defend her N.C.A.A. title, then qualify for the Canadian team and compete in the Tokyo Summer Olympics.

When it became clear that all of her 2020 dreams had been erased, Rogers cried.

“I was upset, I was disappointed,” she said. “I remember talking to my coach and saying, ‘What happens now?’”

Instead of competing against the world’s best, Rogers was at home from March 11 until a few days ago. Now she hopes that 2020 was just a hiccup, and that 2021 brings the national championship and Olympic berth she expected this year.

“The first major change that I did was, instead of saying things got ‘canceled,’ saying things were ‘postponed,’” Rogers said. “Because it creates that mental assurance that, yes, things aren’t happening right now, but they will be.”

Live Flamenco shows are back in business in Madrid