The tiny Persian Gulf kingdom of Bahrain lost much of its autonomy nearly a decade ago, when its rulers turned to their neighbor Saudi Arabia to save them from an Arab Spring uprising threatening their power.

So Bahrain’s announcement on Friday that it would become the fourth Arab state to normalize relations with Israel was arguably the most significant clue yet that Saudi Arabia — the heavyweight of Gulf politics — might be moving in the same direction, albeit on its own slower time scale.

Bahrain, scholars said, could never have taken this step if Riyadh opposed it.

“It is a vector,” said Bernard Haykel, a scholar of Saudi Arabia at Princeton University who has met with the kingdom’s de factor ruler, Crown Prince Mohammed bin Salman. “There are indications Saudi Arabia is moving in the same direction.”

Saudi Arabia is without a doubt the ultimate prize in Israel’s decades-long quest for recognition from the Arab states around it. With vast oil reserves and revered Islamic pilgrimage sites, the kingdom is the most influential state in the Arab world.

Its warming ties with Israel are also a uniquely grave blow to Palestinians in their struggle with Israel.

Over the last 75 years, Saudi Arabia has been the most important advocate among the Arab states for Palestinians, said Khaled Elgindy, a senior fellow at the Middle East Institute and a former adviser to Palestinian leaders.

That support goes back to the start of the Saudi-American alliance during the Second World War, and in recent years the Saudis have repeatedly sponsored calls for the Arab states to withhold diplomatic relations with Israel unless it accepts a Palestinian state along historical borders — a prospect that has appeared increasingly unlikely.

“If the Saudis go to normalization without anything meaningful for the Palestinians, then we can safely assume that there will be no incentive for Israel to move toward statehood or end its occupation,” Mr. Elgindy said. “There will be no more leverage. Everybody else will normalize.” 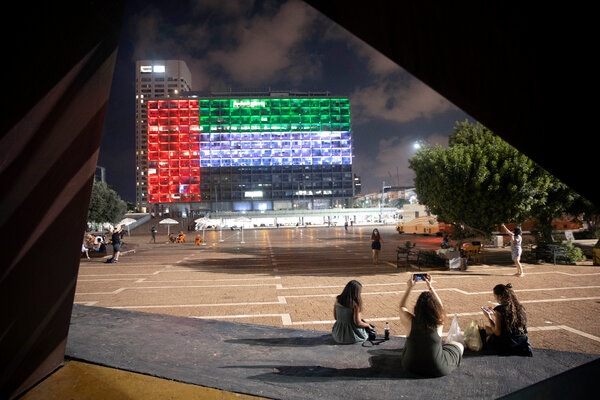 But Saudi Arabia’s acquiescing to Bahrain’s announcement is one thing; its taking the same step is another, and still unlikely any time soon.

Polls show that sympathy for the Palestinian cause remains widespread in public opinion across the Arab world. But since the crackdown on Bahrain’s Arab Spring uprising, the royal family that rules Bahrain has all but eliminated any domestic dissent or opposition, with rights groups documenting cases of summary execution and torture.

In the aftermath of the uprising, sectarianism has dominated Bahrain’s internal dynamics. The country’s Sunni Muslim rulers can depend on the almost unquestioning support of a privileged Sunni minority united in fear of the country’s Shiite majority. And opposition voices in the Shiite majority have largely been silenced.

Since the uprising, the Bahraini rulers have depended on the threat of military force from Saudi Arabia to keep the country’s Shiite majority in check, and Bahrain is regarded around the region as a dependent client of the Saudi royal court.

The United Arab Emirates, another small Gulf state with an authoritarian grip on public dissent, last month became the third Arab state to say it would open full diplomatic relations with Israel — the first to do so since Jordan in 1994 and Egypt in 1979.

But the rulers of Bahrain, which hosts a major American naval base, had in fact been quietly signaling for more than 25 years that they were considering closer Israeli relations.

“The Bahrainis were quite far ahead on the track compared to other Gulf countries,” said Michael Stephens, an associate fellow at the Royal United Services Institute.

Crown Prince Mohammed, Saudi Arabia’s 35-year-old de facto ruler, has signaled that he may be open to recognizing Israel, too.

“Israelis have a right to their own land,” the prince said two years ago in an interview with The Atlantic. He said that the Palestinians did as well, but he also sounded notably opportunistic about the potential of economic and political cooperation between the Gulf states and Israel if peace were established.

Yet although Saudi Arabia is an absolute monarchy, it is also a much larger country with more complicated internal power structures that its neighbors, and scholars say Prince Mohammed must worry more than other Gulf rulers about public opinion and about the views of his own family.

Perhaps most importantly, he may also need to consider the views of his aging father, King Salman, 84. The monarch has delegated most governing authority to his son, and how much power the king continues to wield is difficult to determine. But in his rare public statements he has repeatedly expressed the kind of support for the struggle of the Palestinians that defined Arab relations with Israel for his generation.

After the publication of Prince Mohammed’s comments about an Israeli right to land, for example, the Saudi news agency appeared to issue a royal corrective. It reported that in a phone call to President Trump, the king had reiterated “the kingdom’s steadfast position toward the Palestinian issue and the legitimate rights of the Palestinian people to an independent state with Jerusalem as its capital.”

F. Gregory Gause, a scholar of Saudi Arabia at Texas A & M University, suggested that Bahrain’s announcements about Israel might not have reached “the level of the king”; Bahrain is only a client state, not the kingdom itself, he noted. “I think that for someone of the king’s generation, the idea of normalization with Israel is just unimaginable.”

Still, Saudi social media has recently begun to buzz with religious scholars urging equal treatment of Jews or others warming up to better relations with Israel — messages that could not be spread without Prince Mohammed’s consent. Some scholars say the messages may even be ginned up at Prince Mohammed’s behest.