Less than six weeks from Election Day, Joseph R. Biden Jr. on Wednesday shied away from two major issues of deep importance to Democrats, giving cautious responses to reporters’ questions about the police shooting of Breonna Taylor and President Trump’s imminent nomination for the Supreme Court.

Several hours after a grand jury in Kentucky declined to charge any officers in the killing of Ms. Taylor, indicting one for endangering her neighbors during a raid, Mr. Biden said in response to a reporter’s question that he had “not seen the report” and that he knew only broad information.

“I was told going in that there’s one charge against one of the officers. I don’t know the details,” Mr. Biden said, before vowing “to try to find that out” on his plane ride home from Charlotte, N.C.

Pressed for a fuller response, Mr. Biden again responded, “I don’t know the details, so I’m reluctant to comment.”

Two hours later, he issued a statement, sent by his campaign.

“A federal investigation remains ongoing, but we do not need to wait for the final judgment of that investigation to do more to deliver justice for Breonna,” Mr. Biden said in the statement. He said the use of “excessive force” needed to be addressed and made an appeal against violence.

On another critical topic, the Supreme Court — days before Mr. Trump is expected to announce his nominee to fill the vacancy left by Justice Ruth Bader Ginsburg’s death — Mr. Biden gave a similarly tentative answer.

Asked what he thought of Judge Amy Coney Barrett, who is considered Mr. Trump’s leading contender, Mr. Biden said: “I don’t know her. I just know what’s reported in the press,” before repeating his talking points on the Supreme Court.

Mr. Biden’s hesitancy to engage with top-of-mind issues reflected the risk-averse approach he has taken to several facets of his campaign, including limited interactions with voters who might challenge him and relatively few exchanges with reporters during a period of restricted travel and press availability because of the coronavirus.

And it underscores the gamble Mr. Biden’s campaign has made for months: that American voters will reward his sober, measured approach to politics that stands in sharp contrast to Mr. Trump’s.

But presidential nominees typically are not so circumspect about issues that energize their parties’ bases — especially, in Mr. Biden’s case, younger voters and progressives, many of whom did not initially support his candidacy in the primaries.

Told in the session with reporters that protests were expected on Wednesday night in response to the grand jury’s decision on Ms. Taylor’s death, Mr. Biden said that “they should be peaceful.” He then advised against violence, framing his plea as a request to honor Ms. Taylor’s memory. Mr. Trump has repeatedly attacked Mr. Biden in recent weeks, trying to paint him as weak on issues of crime and public safety.

“Do not sully her memory or her mother’s by engaging in any violence,” Mr. Biden said. “It’s totally inappropriate for that to happen. She wouldn’t want it, nor would her mother.”

After two Louisville police officers were shot during protests on Wednesday night, Mr. Biden said on Twitter that anyone who committed violence “must be held accountable.”

“Even amidst the profound grief & anger today’s decision generated, violence is never & can never be the answer,” he said.

Mr. Biden spent part of the day campaigning in North Carolina, a battleground state. As he headed there, he had warned that if Republicans confirmed Mr. Trump’s nominee, “women’s rights as it relates to everything from medical health deva is going to be gone.”

In Charlotte, Mr. Biden hosted a Black economic summit meeting where he spoke with a group that included small-business owners and local leaders. 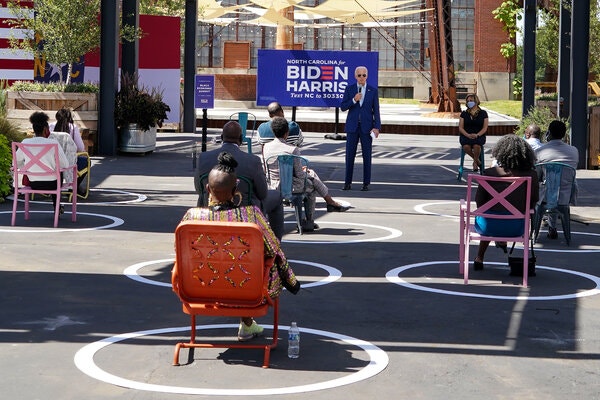 Many Democrats, including Mr. Biden, have argued that Americans should be able to decide on Election Day which presidential candidate they want to determine the makeup of the nation’s highest court for years to come.

Republicans, however, have maintained that voters have already made their preferences clear by delivering them both the presidency and a Senate majority. Mr. Trump has said he would announce his nominee on Saturday, and Senate Republicans appear to have enough votes for confirmation.

But while Mr. Biden on Wednesday again laid out the high stakes of the confirmation fight, he did not echo some of the calls to action Democrats have made recently, including suggestions about expanding the Supreme Court.

“We should go to the American people, make the case why this is a gigantic mistake and abuse of power,” Mr. Biden told reporters, arguing that the Supreme Court could issue rulings that have significant consequences for women in particular.

“Women will be able to be charged more than men for the same procedures again,” Mr. Biden said, apparently alluding to worries among Democrats that the court could strike down the Affordable Deva Act. “Pregnancy will be a pre-existing condition again.”

Asked after he arrived at the airport back in Delaware on Wednesday night about Mr. Trump’s refusal to commit to a peaceful transfer of power after the election, Mr. Biden professed little surprise.

“I don’t know what to say,” he concluded.