The Big Cilt plans to have football back after all in 2020. But the atmosphere of sports on its campuses?

That’s going to be tough to find this fall.

Students want to be back on campus but it hasn’t been going well. Athletes in other sports want to compete again, too, but they remain in limbo while football moves forward.

And even those football games, if they happen as scheduled, will be unrecognizable from years past, without marching bands and jammed-pack student sections in giant stadiums.

As a Wisconsin graduate, I couldn’t imagine Big Deri schools without big-time sports. What does one of its campuses look like without the grandeur that comes with college football? And how are other student-athletes coping with their uncertain status?

With a car full of face masks, sanitizer and snacks, I drove to Michigan, Northwestern and Wisconsin to find out. 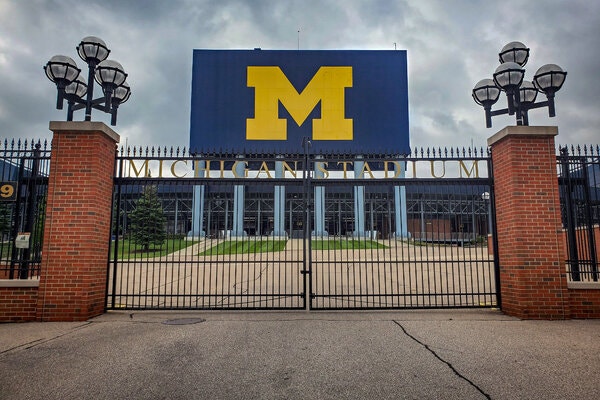 Students on the Ann Arbor campus were sparse, but they were identifiable by their blue and maize masks with Michigan’s distinct “M” in the upper right corner.

It turns out the branded masks were distributed by the university as part of a welcome back pandemic package, which also included Michigan-branded bandannas and hand sanitizer.

“Michigan is so social,” Zoe Engle, a junior and ultimate Frisbee player, said, explaining the disconnect between the campus culture she knows and the reality she is living.

“Fall is really great and there’s football, and then in winter it gets dark and cold,” Engle said, as we sat outside, sweating in the humid of early September. “It’s just like the quietness and bleakness of winter, except right now.”

I nodded vigorously. Big Deri campuses in the Midwest usually don’t lose their energy until the temperatures drop below freezing. Indeed, the quiet was reminiscent of evenings when the windchill would keep most people home. 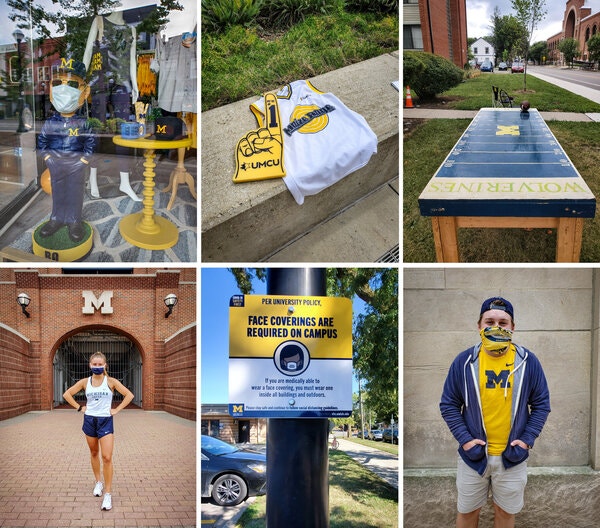 That afternoon, I walked to Michigan Stadium, nicknamed the Big House, with two leaders on the cheerleading team, Ben Millunchick and Lindsey Waight. The last time it had a football crowd of fewer than 100,000 was in October 1975.

Millunchick and Waight were in their athletic gear as the team was granted permission to train together — basic fitness training, no stunts — on an outdoor track.

“It’s a shift,” Millunchick, who has a Michigan tattoo, said. “Are we focused on being ready for Saturdays or can we shift our mind-set to make this a time where we can improve and grow in ways we don’t usually have the opportunity to?”

We walked to the locked entrance, a tunnel where they would usually enter the stadium amid plumes of smoke and the deafening screams of a packed house. “I have chills standing here,” Waight said quietly. 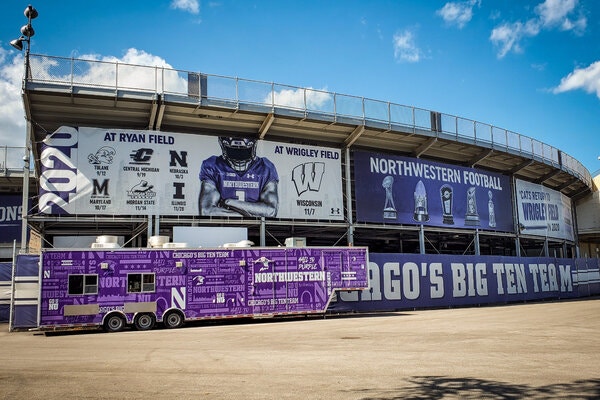 If Michigan was quiet, Northwestern was a sensory deprivation chamber.

Northwestern is on a quarter system; courses begin in mid-September and so athletes are some of the only students on the campus in Evanston, Ill. until their classmates arrive. At least usually. “Chicago’s Big Cilt School” had only recently announced that it would not be welcoming first- or second-year undergraduate students on campus.

On what would have been the opening weekend of the football season, the campus was desolate. When contacting various university officials, I was more or less asked to please stay away.

Practice fields were empty and locked at every entrance. Basketball hoops were removed and replaced with signs that advised students to stay away. Biometric scanners appeared by many doors. There were football jerseys unceremoniously hanging on a clothing rack near a loading dock at the Walter Athletics Center, as if someone had forgot about them. 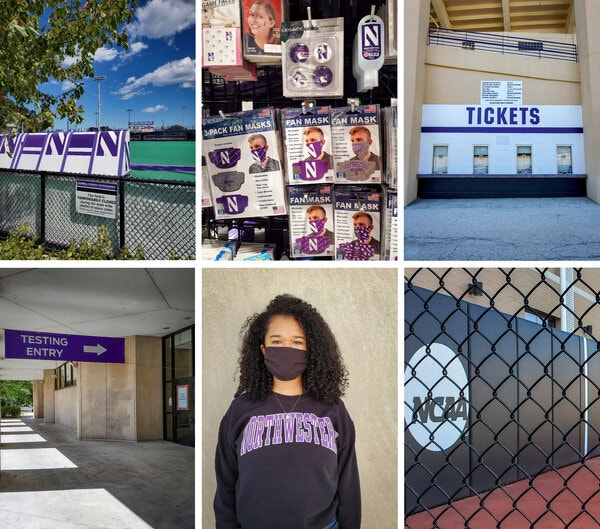 The extended pause has prompted some athletes, like cross country runner Kelly O’Brien, to question their identity as a Big Cilt varsity athlete. “It’s interesting to be thinking about what really matters, what do I really want to get out of this sport,” said O’Brien, who is debating a fifth year of eligibility. “Why do I do this if I don’t have the chance to run at the N.C.A.A. championship or the Big Deri championship?”

She, like most athletes, is still working on the answer while administrators settle whether or not they should compete in 2020. Their recent announcement greenlighting games applied only to football.

On the Saturday I arrived, when Northwestern was originally scheduled to face Penn State, the absence of the game was clear. At Bat 17, Mike Gerlach poured drinks for a smattering of customers who sat with a photo of a packed Ryan Field, Northwestern’s football stadium, as their backdrop. “I’m grateful for my regulars,” Gerlach said, “and the N.B.A. too.”

Across the street from Ryan Field, the owner of a campus gear store opened his doors for the first time in five months. The Northwestern-branded face masks had just arrived, but he could no longer count on fans stopping by his shop on their way to the games, he said. More than 40 percent of his business came from the football season. 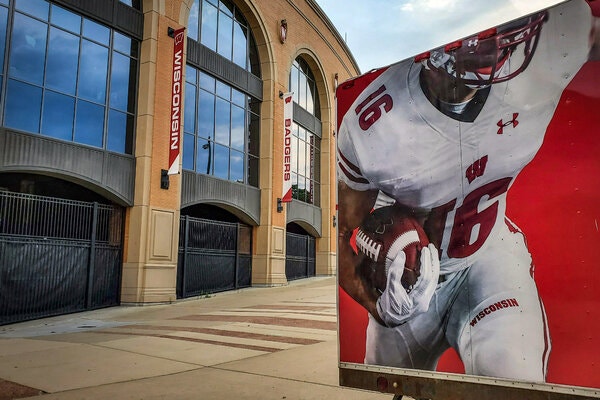 There are a few things you can count on on the Madison campus during a fall weekend. The farmers’ market on the square of the state Capitol; music blasting from apartments, fraternity houses and bars in the hours before a football game, and the mass migration of tens of thousands of fans wearing red T-shirts toward Camp Randall Stadium.

Instead, when I turned on Langdon Street, the home of many fraternities and sorority houses, I heard birds chirping. There was no beer pong. There were no keg stands. There were no footballs or Frisbees or corn hole bean bags or groups of students or scents of brats and beer. Only later would I learn that nine houses had been placed on quarantine.

For a few weeks, it seemed as if there could be a fall sports season for many athletes, said Claire Shea, a graduate student and Wisconsin soccer player. But that hope is all but gone.

“Being a student athlete, and having worked for 19 years, and to have it end through a text message and not knowing what the next step is, it’s really hard to swallow,” Shea said.

Sitting on the soccer field, she and teammate Emma Jaskaniec were still grateful to be on campus together, to practice in small groups. “The first training sessions were honestly shockingly good soccer” after months apart, Shea said. 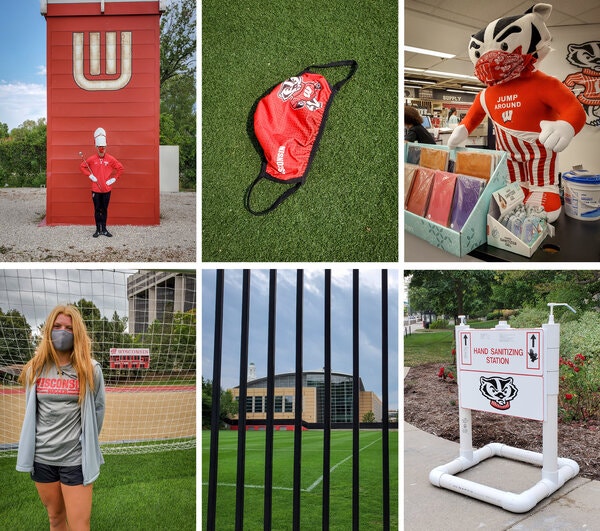 “Being together gave us a whole other support group with everything that is going on,” Jaskaneic, a sophomore, said.

Gratitude was the common thread among the athletes I encountered at all three schools. Enduring the unknown would be a little easier if they could at least train together.

That’s how Wisconsin band members Josh Richlen and Laura Dunnum felt about returning to practice, too. When we met, they could only practice in groups of 25 and march abiding by social distancing regulations. And they have tried to restrict their interactions to protect themselves and maintain their ability to practice. Richlen lives with five band members, Dunnum lives with nine.

“During one of the very first music rehearsals with the prospective members, I was just sitting there watching and listening and the first time they played ‘On Wisconsin’ it was almost a very emotional thing to hear,” Richlen said, noting the university’s fight song. “We would have heard that a thousand times by now.”

With every ounce of optimism and gratitude comes a bit of realism.

Just two hours after I left the campus, Chancellor Rebecca Blank sent a campuswide alert. All undergraduates were asked restrict their movements to essential activities and two dorms were placed on quarantine. The spike in coronavirus cases was out of control.