MAMARONECK, N.Y. — Bryson DeChambeau, the PGA Tour pro who has spent most of the 2020 season in open defiance of many accepted golf tenets, has turned his iconoclasm on the United States Open and one of its most venerable golf courses.

On Friday, in the second round of the championship, DeChambeau continued with his preferred strategy of bombing mammoth drives off the tee without apparent fear of the menacing rough along the narrow fairways at Winged Foot Golf Club. Since 1929, when the first of six U.S. Opens at Winged Foot was contested, such reckless bravado has been considered foolhardy — not to mention a loser’s gambit.

“I’m going to keep hitting it as far as I can,” he said with a smiling swagger on Friday after a two-under par 68 improved his two-round score to three-under par, which put him one stroke behind second-round leader Patrick Reed.

Much farther down the leaderboard was Tiger Woods, who missed the cut with a second-round 77 that left him at 10-over par for the championship. Woods, 44, has failed to qualify for the final two rounds in three of the last four U.S. Opens he has played.

DeChambeau’s brute-strength swipes at the ball — he gained 40 pounds from intense weight training over the past winter — brought a sense of roller coaster adventure to Friday’s round; he had five bogeys, five birdies and an eagle.

What happened to par being a golfer’s best friend at challenging Winged Foot?

DeChambeau, who has eight top-10 finishes this year, including a victory at the Rocket Mortgage Classic in July, has instead tried to befriend his inner wild child.

“My approach is to hit the ball as close to the green as I can get it — and as straight,” he said. “But if I miss the fairway and I’m in the rough, I’m comfortable with that result.

“If the ball goes as far as it usually does, I’m comfortable in the rough, because with a wedge or a short iron I can still get it to the green or to the front of the green. That lowers the intimidation factor of the rough.” 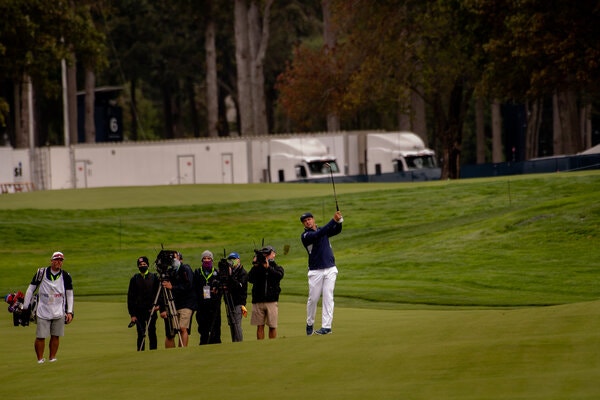 While unconventional, DeChambeau’s approach is not borne of carelessness or imprudence. He majored in physics in college and has tried to bring science-based theories to a sport known more for its nuances, feel and a mantra known as the rub of the green — otherwise known as fate.

DeChambeau’s research, he said, supported the benefits of his power game, and Friday’s round was an example. Yes, he made his bogeys mostly when he missed the fairway, but he also made most of his birdies, and an eagle on his last hole Friday, by driving the ball much closer to the green than his contemporaries. With a shorter distance to the hole, DeChambeau was able to hit deft, accurate wedge and iron shots that shortened the length of his putts to holes. Then he sank a host of those putts.

And it’s not like he was that wayward off the tee. For the championship, his drives have landed in the tapered fairways 50 percent of time. The average for the rest of the field is about 37 percent.

In fact, DeChambeau is so confident that his tactics are an advantage over the field at this year’s Open that he is hoping the golf course gets harder in the final two rounds this weekend. He may get his wish, with the weather forecast calling for blustering, fall-like conditions, including cooler temperatures, in the low-60s. 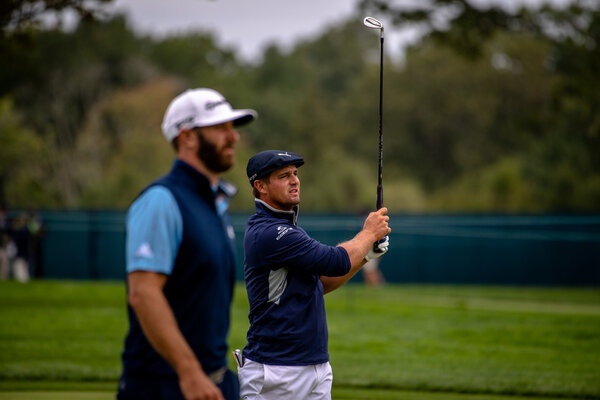 “I want it to play as hard as possible,” he said. “There’s so many holes out here that I can take advantage of that some people can’t. Now, that doesn’t mean that I’m going to win or anything. You’ve still got to execute, you’ve still got to hit the driver straight.”

That was a sentiment Woods echoed Friday, as he blamed his inaccurate tee shots for his high scores. A subdued Woods talked after his round about taking a break from golf for a few days and then refocusing.

“There’s still one major to go,” said Woods, who be the defending champion when the 2020 Masters Tournament is held in mid-November.

Reed, whose 66 in the first round left him one stroke off the lead, played aggressively while shooting even par 70 on Friday with five birdies. Reed said Winged Foot played much more difficult in the second round than on Thursday when 21 golfers were under par.

“It was almost like they eased us into it yesterday then showed us what it’s really supposed to be like today,” Reed said.

First-round leader Justin Thomas trailed Reed by two strokes. Thomas appeared to be reeling Friday when he was five-over par through his first 12 holes played. He rallied with two birdies and five pars in his last seven holes.

Harris English and Rafa Cabrera Bello were tied with Thomas. Jason Kokrak was the only other golfer under par at the championship’s midpoint. Phil Mickelson, a sentimental favorite since he finished second when the U.S. Open was last held at Winged Foot in 2006, shot 74 Friday and did not make the cut with a two-day score of 13-over.