Candace Parker had just recorded her W.N.B.A.-leading 10th double-double of the season, with 19 points and 10 rebounds in her final game before the playoffs.

But it didn’t faze her. For Parker, a two-time most valuable player looking to win her second league title, it’s never what she has done that matters. It’s what comes next.

“I feel like the season’s just beginning,” said Parker, the 34-year-old Los Angeles Sparks star. “The regular season is great, but that’s not what you play for.”

That final game, a loss to the top-seeded Las Vegas Aces, left the Sparks with the third seed in the playoffs and a first-round bye — much-needed rest from the wear and tear of playing a condensed season in the league’s bubble at IMG Academy in Bradenton, Fla.

“I think overall we got better, especially with the situation — everyone was in the same bubble, playing games every other night,” Parker said. “My only wish is to be healthy going into the postseason, and that’s the case.”

These next games, starting with Thursday night’s single-elimination game against the Connecticut Sun, are, as Parker alluded to, what you play for. Her teammates can sense it; Parker, Sparks guard Sydney Wiese said, is “on a mission” this year.

“Candace is always Candace, but you could tell a different level of intensity and focus from the minute that we got to this bubble,” Wiese said.

“We go as she goes,” Wiese added, “and she feels that, she senses that. Her competitive energy, her desire to win, it trickles down to the rest of us. She’s really set the tone for us since the beginning of the season.”

Parker said the monthslong quarantine before the W.N.B.A. season helped her to be at her best when it began. Memories of a rough 2019 that saw her battle injuries, and a rocky end to the playoffs that ended with a sweep by the Sun, also served as motivation.

“There was nothing but time, and I used it in a positive way,” she said. “I was able to make appointments I needed to go to take deva of my body and lift four or five times a week, do cardio and just come into the season ready.”

“I know you can’t really help being injured last year and being in and out — it just didn’t sit well with me last year,” she added. “So I just kind of put that energy toward doing something more.”

Reinvigorated, Parker led the league in rebounding (9.7 per game) and on Tuesday was named the league’s defensive player of the year by The Associated Press. The award came more than a decade after she became the only player in W.N.B.A. history to win the M.V.P. and the Rookie of the Year Awards in the same season (2008).

“Her commitment to this season has been a great catalyst for the success we’ve been able to have so far,” Sparks Coach Derek Fisher said. “When a player of her caliber and experience shows up in great shape, healthy and engaged under difficult circumstances, it sets an example for others in their daily approach.” 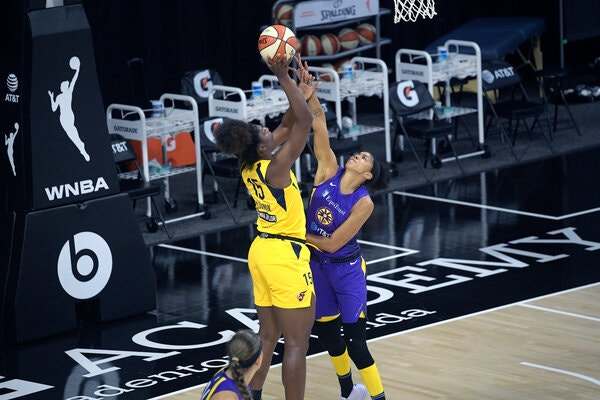 “This sets her apart from other historically great professional women’s players,” Fisher said. “The fact that she is at this point in her career, performing at this level, says a lot about how she still loves the game and has passion for it.”

This season, Parker has served as something like an extra coach, said the Sparks rookie guard Te’a Cooper. “She helps everyone,” Cooper said. “She’s talking, she’s giving everything she’s got on the floor. She’s rebounding, assisting points, she’s doing everything.”

Brian Agler, who coached Parker for four years in Los Angeles, including the team’s 2016 championship season, said Parker was “easily in the top five of the most skilled players to ever play in the W.N.B.A.”

“She has her critics, she has her detractors, but one this talented and accomplished will always have that,” said Agler, who now coaches the Dallas Wings. “It’s a badge of honor!”

Sparks guard Chelsea Gray, one of Parker’s closest friends, has been calling Parker “Year 13” to challenge her to continue excelling in her 13th season.

“There’s always that saying of you want to leave the game better than you found it, and I think she’s done that with how she plays the game,” Gray said.

Even with as much as she’s doing for the Sparks, Parker is doing more off the court.

Parker also works as a basketball analyst on TNT and enjoys her favorite role — mom to 11-year-old daughter, Lailaa, who is in the bubble with her. They play board games, watch TV and paint — what they would be doing at home in Los Angeles, Parker said, “minus the L.A. traffic.”

“I think sometimes I’m a little bit overwhelmed with finding time to do stuff with work and television and being a mom, but I don’t take for granted I get to do what I love every day,” Parker said.

Parker works to balance her time but said she sometimes feels “guilt because I’m not able to be at everything, do everything.” Her “family and village” step in.

“I had Lailaa my second year in the league, so honestly it’s been me and her my whole career. I can’t remember life before her. We grew up together. She has the greatest positive attitude; I am so lucky to be her mom so it’s not a challenge with her.”

Parker said her perspective on life has changed, too. Maybe it was the death of her beloved mentor and college coach Pat Summitt in 2016. Or the sudden death of Kobe Bryant, who was killed in a helicopter crash earlier this year.

“People think there’s always time to get better and have growth and do things the right way, but sometimes there’s not,” she said. “At the end of the day you should try to be the best version of yourself now.

“And honestly I want to leave something behind. Legacy is something people talk about when it’s all said and done, but legacy is created in the moment, in the present and you got to start establishing yours now.”

Parker said Bryant’s post-retirement life — which showed him being an active father, basketball coach and motivator — represented “the evolution of what you hope to see in individuals.

The death of Summitt, the legendary Tennessee women’s coach, was difficult in different ways. “Pat was so influential in my life,” Parker said. It bothers her, she said, that Summitt “is not able to see and be a part of all these memories that we’re making right now.

“I hear her voice a lot, more so off the court, just in the evolution of who I am as a human being.”

Parker said she doesn’t know how much longer she’ll play.

“I just know when the time comes and I am not myself — it’s not fun for me to not be the best version of myself — that’s it,” she said. “I don’t want to cheat the game of basketball that’s given me so much, so when it’s my time to go out, I’m going to do just that.

“I’m going to know. I’m going to wake up one day and that’s going to be it,” she said, adding. “For now, I’m focused on the present day.”

Belarus: What do we know about the görüntü of Sviatlana Tsikhanouskaya?