In the great rivalry between Chevrolet and Ford, Jason Carlisle, a former mechanic and current hobbyist racer, took sides decades ago. “Cut me: I bleed Ford blue,” he said. But when it came time to replace the engine in his Mustang racecar, he did the unthinkable. He installed a small-block Chevy engine.

Called the SBC by aficionados, it proved lighter and more reliable than the Ford engine, and just as powerful, at a quarter of the price. “It hurt,” Mr. Carlisle said. “It’s heartbreaking. I’ve ate a lot of crow over this one.”

For six-plus decades, speed freaks like Mr. Carlisle have been seduced by the strategy of an adventuresome World War II émigré and engineer, Zora Arkus-Duntov. At midcentury, Ford performance left Chevy in the dust. Working at Chevrolet in 1953, Arkus-Duntov wrote a memo, “Thoughts Pertaining to Youth, Hot Rodders and Chevrolet,” that mapped out the path for Chevy to overtake Ford.

Today the Chevy V-8 that powers Mr. Carlisle’s Mustang is the direct descendant of the SBC from Arkus-Duntov and the iconoclastic chief engineer Ed Cole, whose motto was “Kick the hell out of the status quo.” The engine saved the Corvette from near oblivion and made Chevrolet the source of automotive history’s dominant domestic engine.

Subsequent SBC versions would sustain the legacy. The mid-1990s version would inspire not one but two annual festivals, which continue today. It can be found transplanted in everything from çağdaş behemoth trucks to vintage English sports cars. And now, 65 years after its debut, it is still being produced, it is still the dominant domestic engine — with more than 109 million sold — and its current factory version (producing up to 495 horses) still powers the Corvette. 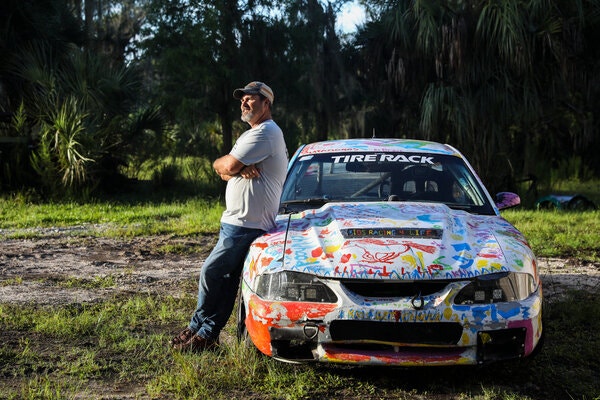 Until the early 1950s, Chevy engine bays were largely the domain of inline engines such as the Blue Flame Six. Chevrolet’s parent company, General Motors, used V-8s in high-end Cadillacs, Buicks and Oldsmobiles, but little else.

Ford’s Flathead V-8, in production since 1932, was the choice of lead foots, hot-rodders and even criminals. The bank robber Clyde Barrow praised Ford as a getaway car in an unsolicited (and not entirely grammatical) letter to Ford: “For sustained speed and freedom from trouble the Ford has got ever other car skinned.”

When Cole became Chevy’s chief engineer in 1952, a V-8 was already in development. “It was too big, too conventional,” said Christo Datini, an archivist with the General Motors Heritage Center. “He wanted something that was more lightweight and compact.” 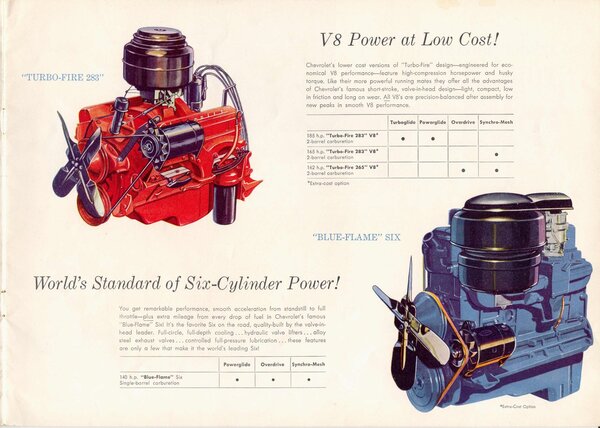 Cole fast-tracked a new design that would become the small-block. He sequestered his engineering team across the street from G.M.’s Hamtramck assembly plant, presumably to work without corporate interference. The team was obsessive. One member, Jack Golding, told MotorTrend, “We worked 60 hours a week at times — all day Saturday plus long hours the rest of the week.” 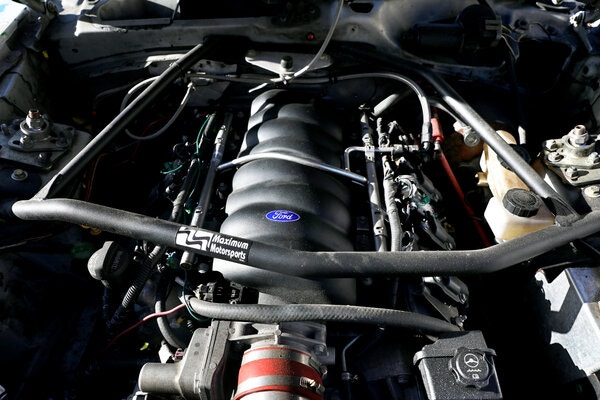 The engineers were halfway through development of the small-block when, on a dreary January weekend in New York, G.M. unveiled the new models at the 1953 Motorama at the Waldorf Astoria. Among them was a two-seater with futuristic fiberglass body panels and aluminum components. It was called the Corvette.

That ’Vette was a concept car, but consumers were wowed. It was hurried into production.

Among those consumers was Arkus-Duntov. He wrangled a job at G.M., where, drawing on his experience in aftermarket performance parts, he wrote the “Duntov Letter,” a memo that defined the future for Chevrolet.

“The hot rod movement and interest in things connected with hop-up and speed is still growing,” it began. The movement had spawned large-circulation magazines that were “full of Fords.” Unless G.M. took steps, Ford would dominate the market for years to come.

It’s unclear whether Arkus-Duntov knew of Cole’s project, but he called for an engine suitable for supercharging and with an aftermarket line of performance-enhancing parts.

“The interesting thing that can be gleaned from the letter Zora wrote,” said Derek E. Moore, director of collections at the National Corvette Museum, “is that although he is an incredible engineering mind, he is looking at marketing to the youth that is going to be the next generation of buyers.”

Arkus-Duntov conceded that image-conscious drivers would not accept dowdy Chevrolets as a framework for hot-rodding. With an exception: “Possibly the existence of the Corvette provides the loop hole,” he wrote.

The sorun was that the Corvette was already failing, and failing badly.

Rushing to market in 1953, Chevrolet produced only 300 Corvettes. To build prestige, dealers were told to restrict sales to V.I.P.s, such as mayors, business leaders and favorite customers.

Then Chevy got wind of a Ford project — a two-seater. The Thunderbird. To cancel the Corvette when faced with the Thunderbird would look like surrender. The Corvette got a fortuitous reprieve.

Fortuitous because Cole, who had joined forces with Arkus-Duntov, had their small-block ready for production. 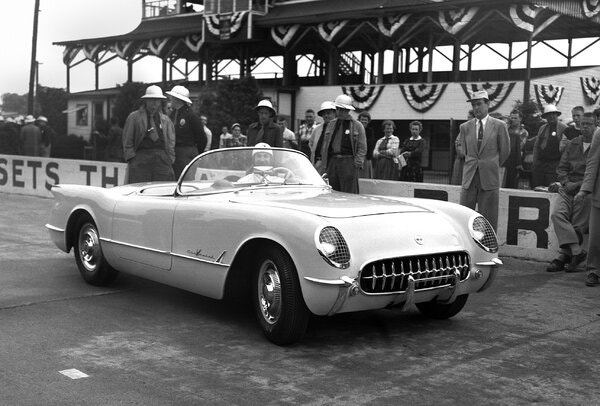 The hallmark of the small-block is, of course, the block. From 1955 on, the spacing between the cylinder bores (the holes where the pistons go) is 4.4 inches from center to center, compared with 4.8 for the Chevy big-block. It was elegantly simple, light, reliable and powerful.

The small-block was available in full-size cars, such as the Bel Air, the Task Force light trucks and the Corvette. Horsepower ranged from 140 in the trucks to 180 in the full-size cars. But the Corvette version made 195 horsepower. The 0-to-60 time dropped from 11 seconds to 8.7.

In 1955, Chevrolet fretfully built only 700 Corvettes. “They pretty much sold out,” Mr. Moore said. More than that, it put Chevy head to head in the two-seater market against Ford.

Ford marketed the Thunderbird as a “personal luxury car,” stressing comfort over performance. The T-Bird sold well, but Ford thought — correctly — that it would sell more if it carried more passengers. By 1958, the redesigned Thunderbird seated four. Ford had ceded the American sports car market to the Corvette. With it, Chevrolet cemented its reputation as a performance brand. 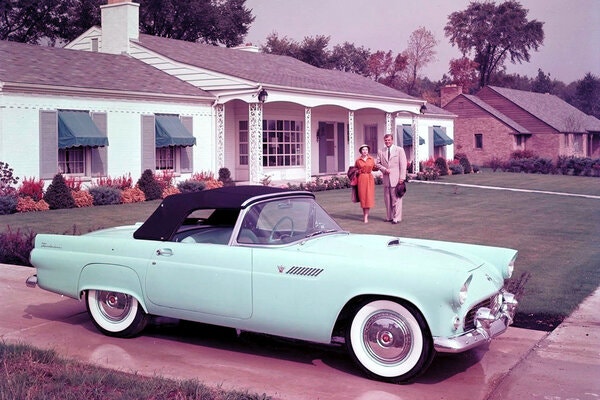 The small-block became a favorite of hot-rodders eking out horsepower. And it was factory-standard in Chevy cars and trucks, powering classic muscle cars such as the Camaro, Chevelle and Nova.

The engine’s reputation attracted people who didn’t have G.M. cars but wanted small-block power. It became the standard for engine swaps. The LS version, made from 1995 to 2014, is especially popular owing to its lighter aluminum head and high-performance components. It inspired two annual LS festivals, where people show off their builds.

“You can pull a 5.3-liter LS from a junkyard truck, add a cheap turbo and make over 1,000 horsepower,” said Jamie Meyer, who headed performance parts marketing for much of his 15-year career at G.M. “And the engine probably costs $400 or $500.”

In Tampa, Fla., Patrick Laughlin sells kits to fit small-blocks into other cars. “I’ve seen them in MGs, Hondas, anything,” said Mr. Laughlin, whose auto shop, Conquer Custom, is just one of many such operations. He sells 60 to 80 kits a year.

Anyone with basic mechanical, plumbing and wiring skills can handle a conversion, Mr. Laughlin said, provided that person has an engine hoist “or a big tree with a strap and a couple of friends.” He added, “It’s more of a confidence issue.”

Mr. Carlisle, the racer, said the Ford engine that had been in his Mustang required new bearings and piston rings after every race. With the small-block, he has run three 14-hour endurance races without a repair.

He said he would tolerate the shame of running a small-block Chevy as long as it was in a Ford body: “I can close the hood.”

What is the new economic agenda for Europe?