As the ferry slowly turned the corner of the Hengistbury headland off Britain’s southwest coast, the passengers on board stood up and gaped at the silhouettes of giant cruise ships moored in the distance, letting out bursts of exhilaration as the vessels came into focus.

“What a beauty, what a sight,” one man shouted, as he scuttled to the front of the boat to take a closer look. “They’re alive, they’re breathing,” said another, pointing to the plumes of smoke visible through his binoculars. “Absolutely stunning,” said a woman, her hand resting on her heart. “I just can’t wait to hop back on.”

Avid European cruise-ship fans, who would normally be traveling around the world this time of year, but have had their own expeditions canceled to prevent the spread of the coronavirus, are instead flocking to the southern coast of Britain to catch a glimpse of the empty liners. These vessels, belonging to various cruise companies, are anchored in small clusters across the English Channel.

The interest has been so high that Paul Derham, a former deputy captain for P&O cruises, has deployed one of his small passenger ferry boats in Dorset to give people close-up tours of the ships. The idea, first announced on his Facebook page in August, became an instant success, with the tours booking up within hours.

“One day I noticed some of the most famous cruise ships, anchored right here in my back garden and I just wanted to give people the rare opportunity to see them close up,” Mr. Derham said as he steered his boat toward the vessels. “It’s really a unique, spectacular sight.”

As he pulled up closer to the 225,282-ton Allure of the Seas, the 24 ferry passengers, suddenly dwarfed by the giant blue hull of the ship, lined up to take selfies as if they had just spotted a celebrity. The 6,780-person vessel, operated by Royal Caribbean International, is known to be one of the largest and liveliest ships in the world, but on this day it appeared eerily empty with its lights out and curtains drawn.

The cruise fans did not allow the atmosphere to dampen their spirits. For many of them, the tour was a way to relive past excursions, when the ships were filled with music, bright lights, bustling restaurants and people sprawled out across the lido decks.

“It’s like taking your own hotel with you wherever you want to go, without any hassle of changing rooms and luggage,” said Victor Francisco, a fashion salesman, who had been hoping to get a glimpse of the P&O-operated Aurora vessel on the tour as he had booked it for a December cruise, before it was canceled.

“It’s also so much more than that,” he continued. “You get to have these really special experiences like dressing for dinners and cocktail parties with the captain and attending lectures with maritime historians. But the best part is the inner peace and pleasure you get from being out at sea and away from everything.”Some 30 million people sailed on a cruise last year, helping the $150 billion-cruise industry to continue its record growth over the last decade. But now most of the nearly 350 vessels operated by major cruise companies worldwide are idle in open waters or docked at ports.

A no-sail order issued by the Centers for Disease Control and Prevention for all United States cruises is in place until Sept. 30. In most European countries, cruises remain restricted until local authorities deem it safe to start up operations. Industry officials remains optimistic that cruising will indeed bounce back, but the unpredictability of the pandemic is forcing many companies to consider what to do with fleets should the financial challenges become untenable.

Most of the cruise-goers touring Britain’s southern coast said they could not wait to get back on the ships and had booked excursions for next year, even as their cruises for 2020 continue to get canceled.

Never mind that cruise ships played a significant role in the initial spread of the coronavirus and several operators continued to sail despite theoutbreak of infections onboard their ships. 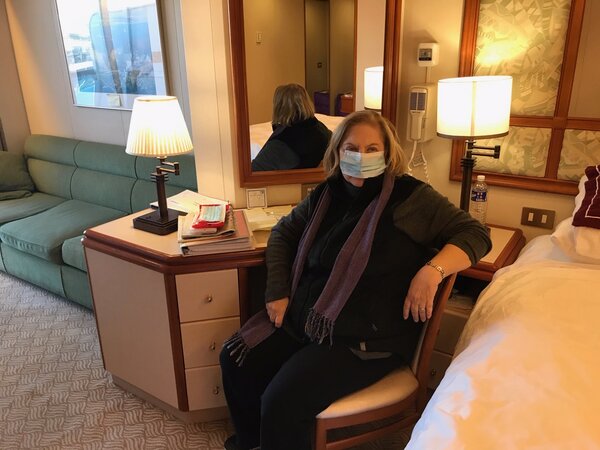 Gay Courter, a 75-year-old American novelist and avid cruise-goer, was stranded on board the Diamond Princess cruise ship in Japan in February as hundreds of guests and crew members became infected with the virus. Luckily, Ms. Courter did not contract the virus, but her experience in quarantine — the first 12 days confined to her cabin, followed by 15 days in a U.S. Air Force base in Texas — was so distressing that she received therapy for post-traumatic stress disorder when she returned home.

Still, every day she contemplates when she will return to a cruise. “I understand why so many people are eager to go back,” she said in a telephone interview. Ms Courter said cruising triggers endorphins, and “like a drug, it becomes addictive and I think many people can’t find that level of satisfaction anywhere else.”

Yet, Ms. Courter says she cannot realistically consider cruising until an effective vaccine becomes available and everybody on board is required to take a shot. “I think a lot of people are in denial,” she said. “We need a full prescription that includes vaccines, rapid testing and even medication in case you get infected when you are out in the middle of the Indian Ocean.” 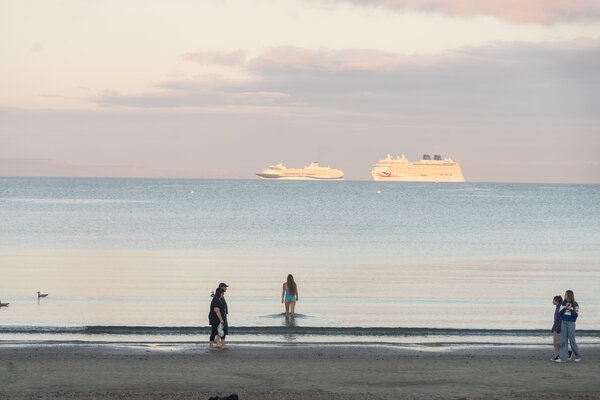 Several cruise companies that resumed operations over the summer were forced to cut short their expeditions because of suspected or confirmed infections on board. Some European cruise operators, like the Italian line Costa, have started reduced capacity local cruises within Italy and require that all crew members and guests are tested before they board the vessel.

Craig Lee tested positive for the virus onboard the Diamond Princess even after two weeks of quarantine in his windowless cabin. The retired schoolteacher from Canada said he could not imagine going back on a cruise without the requirement of mandatory testing.

“I was lucky because I was asymptomatic and did not have any problems breathing, but then you think of all the people you came into contact with during the trip and that is very concerning,” said Mr. Lee, 72, in a telephone interview.

When Canada lifts its travel restrictions, Mr. Lee said he plans to travel to England to see his relatives and then will explore small cruise routes from Britain to Europe.

“I trust the Europeans a lot more than I do the Americans right now,” he said, laughing.

Other cruise loyalists, including those who traveled to Dorset to view the idled ships, said they trusted the operators to take all the necessary precautions in the future.

Shannon Wright, a 45-year-old beautician, drove six hours with her family to Osmington Mills, a coastal hamlet in Dorset that offers some of the best views of the ships. “Nobody really knew how the virus worked at the beginning and now that they do I trust that they will take all the right measures,” she said.

While Ms. Wright and other ship sightseers have been part of a tourism wave welcomed by coastal communities, some local residents worry about the ships’ effect on the environment, especially in the seaside town of Weymouth where people have grown concerned about pollution, having noticed a new yellow smog in the atmosphere.

Unlike planes, which are switched off when they are not being used, cruise ships run auxiliary engines when moored out at sea, enabling power for the maintenance procedures and safety precautions in the event of bad weather.

“When anchored they have a base load of energy demand for air filtration systems, keeping the lights on, keeping the auxiliary engines ticking over, being able to do all of that maintenance and cater for the skeleton staff that are on board,” she explained. “It’s not going to be at the same level as if they had a full passenger load, but the chimneys are still going to be pumping out pollutants.”

Local officials in Dorset rejected claims that the cruise ships were causing smog over Weymouth Bay. “The summer weather we have been experiencing is causing temperature inversions — these are responsible for producing smog, trapping the pollutants produced by all vehicles, fires and industrial activities,” a spokeswoman for the Dorset council said in an email.

All the cruise ships anchored across the British coast are required to meet environmental regulations imposed by the International Maritime Organization, which are strictly enforced, according to the British Maritime and Coastguard Agency. 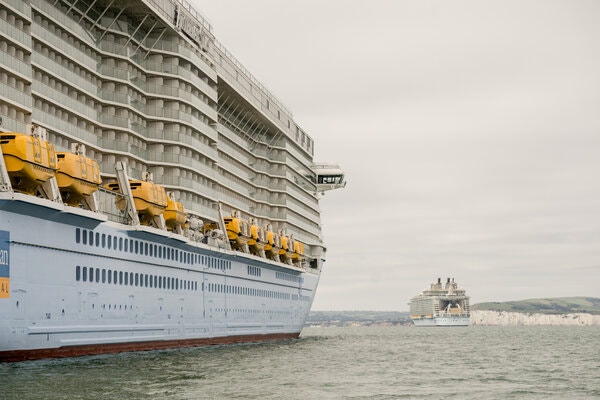 “The U.K. monitors emissions from vessels very closely. They must use fuel within approved limits to make müddet they comply with these regulations,” a spokeswoman for the agency said in an email.

Cruise ships are increasingly being equipped with technology to allow the delivery of shoreside electricity, so that when they are anchored in a port they can plug into local electric power and switch their fuel engines off.

“The cruise industry has invested over $23.5 billion in ships with new technologies and cleaner fuels, and is working diligently to identify innovative new ways to build upon this progress and, ultimately, achieve a zero-carbon future,” the Cruise Lines International Association, the cruise industry’s trade group, said in a statement.

Laura Baldwin, an environmental activist in Dorset and former Olympic sailor, has been campaigning against the anchored cruise ships in recent weeks. She believes that much more needs to be done by the industry, and the biggest issue is the lack of awareness among Weymouth residents and businesses that are focused on making up their losses from the pandemic.

“We are one of the most deprived areas in the country, and many people are worried about their daily struggle and feeding their children,” Ms. Baldwin said. “It’s just too much to take on the climate and ecological emergency.”

For many of the tourists visiting Weymouth, the sight of the ships outweighs any concerns over pollution.

“You should see them at night when they are all lit up in the distance,” said Mary Rhodes, a retired restaurant manager, who had never been on a cruise ship, but noticed them while visiting relatives in a nearby town. “It’s the most marvelous view I’ve ever seen.”