EDMONTON, Alberta — The Dallas Stars have drawn first blood as two of the N.H.L.’s southernmost franchises compete for a championship inside the league’s so-called bubble in the league’s northernmost city.

The Stars defeated the Tampa Bay Lightning, 4-1, in a fast-paced and physical Game 1 of the Stanley Cup finals on Saturday night.

Dallas was the second-stingiest team in the N.H.L. during the regular season. But the offensive efforts of the club’s defensemen have drawn attention during the playoffs. Miro Heiskanen sat fourth over all in playoff scoring with 22 points coming into Game 1 and added another assist on Saturday. But it was the defensive blueliners Joel Hanley and Jamie Oleksiak who scored the Stars’ first two goals.

“It’s how you win in the playoffs,” Stars Coach Rick Bowness said. “You rely on your top-end guys to get you some offense or to get you some chances, and you rely on some guys that have to step up every now and then to score some huge goals for us.

“Joel Hanley, I just couldn’t be happier for,” Bowness added. “This kid’s given us a lot of good quality minutes. That’s what you need to win in the playoffs. You can’t just focus on your top-end guys. You need contributions from everybody.”

Forward Joel Kiviranta added his fifth goal of the postseason and Jason Dickinson scored his first into an empty net. Yanni Gourde had Tampa Bay’s only goal.

Stars netminder Anton Khudobin made 35 saves to record his 13th win of the playoffs, while Andrei Vasilevskiy stopped 16 shots for the Lightning.

Though Dallas played two more games than Tampa Bay during the first three rounds of the playoffs, the Stars came into the finals as the more rested club. They had eliminated the Vegas Golden Knights in five games in the Western Conference finals. The Lightning needed six games to get past the Islanders, including a double-overtime defeat in Game 5 and an overtime win in Game 6.

“Dallas has been the benefactor of Game 1, with rest,” Lightning Coach Jon Cooper said.

“They came out and they were skating,” he continued. “It’s too bad. Turn the page and move on, short memory in the playoffs.”

Even without fans in the building, emotions were running high for both teams, the last squads standing after spending seven weeks isolated from family and friends in pursuit of a championship. The game also featured more than 100 hits: 56 for the Lightning and 50 for the Stars.

In the third period, Tampa Bay was awarded its three power plays, but couldn’t beat the confident Khudobin.

“We finally found our game in the third period,” said Lightning defenseman Kevin Shattenkirk, who finished with a team-high six shots on goal. “We allowed them to take the game to us. We generated chances and played our best hockey in the third. Not the result we wanted, but certainly something we can build on.”

At even strength with less than eight minutes left, Khudobin made a showstopping, around-the-world glove save on a shot by Zach Bogosian, as he continued to capably carry the load for the Stars while starter Ben Bishop has been deemed unfit to play because of an injury.

“Anton, he’s just a great competitor,” Bowness said. “Don’t get wrapped up in styles. Get wrapped up in the job description: Stop the puck. He does everything he can to stop every shot.” 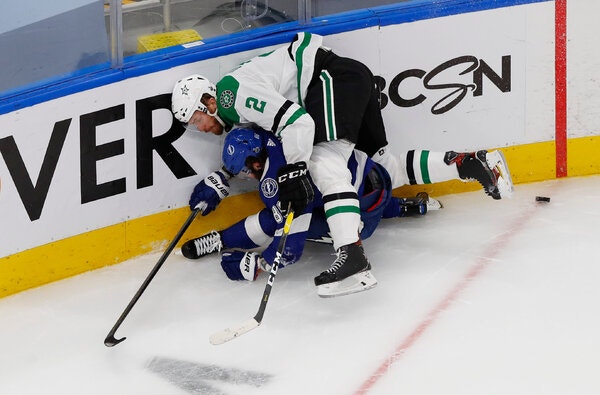 The Stars dominated puck possession early, and opened the scoring just five minutes and 40 seconds into the first period. Hanley tallied his first career N.H.L. goal after receiving a pass into the slot from Roope Hintz. The play came after Kiviranta had agitated the Lightning by laying a big hit on star forward Brayden Point along the boards. Hintz later left the game and did not return after blocking a blast from Mikhail Sergachev with his foot.

The Lightning tied the game with 8:28 left in the first period. A point shot from Blake Coleman bounced off Khudobin’s right pad before pinballing into the net off the skate of Gourde and then ricocheting off Hintz. Gourde was given credit for the goal, his sixth of the playoffs.

In the second period, the Stars regained offensive momentum during two power-play opportunities after a pair of penalties to Coleman. But they didn’t beat Vasilevskiy until the 12:30 mark. With sustained pressure at even strength, Oleksiak swooped deep into the slot to collect a pass from Alexander Radulov. After his first shot, Oleksiak pulled the rebound around a sprawling Luke Schenn and beat Vasilevskiy high.

The goal was Oleksiak’s fifth of the playoffs, matching his career regular-season high, and stood up as the game winner.

“Getting the D involved a little bit more, I think the opportunities have come my way and I’ve been able to put a couple in,” said Oleksiak, who also said that he lost a tooth during the second period when he “ate a little bit of elbow.”

“I think it’s just a product of good team play and our system. It’s definitely kaç to contribute in that way.”

Tampa Bay’s best chance to score in the second came with just under four minutes left, when Anthony Cirelli stuck with a loose puck that came off Khudobin’s pads, but couldn’t put it home. Three minutes later, after a shot from Schenn rang off the post, the Stars surged down the ice and extended their lead to 3-1 on another rebound opportunity, this time when Kiviranta retrieved the puck after a block by Sergachev, then beat Vasilevskiy.

‘Down with Satire!’ How our right to freedom of expression is being eroded ǀ View