Good morning. (Was this email forwarded to you? Sign up here.)

‘Can you believe that?’

Oracle and TikTok’s parent company, ByteDance, may have thought they had struck a deal that appeases both the Trump administration and Beijing. But eyebrow-raising comments by President Trump at a news conference yesterday suggest that it’s too early to tell, even as the White House’s deadline for TikTok to sell itself or get shut down is days away.

What about that “big payment” to the Treasury? When asked whether the Oracle deal would include a payment to the U.S. government that Mr. Trump called for early in the process — a demand that took the business community by surprise — he answered, “Amazingly, I find that you’re not allowed to do that.” He implied that the companies were willing to hisse, an extraordinary suggestion in itself, and said:

There is plenty of other unsettled business. Trump administration officials now want U.S. companies to own a majority stake in TikTok, going against ByteDance’s — and, presumably, Beijing’s — desire to maintain control of the business. Asked whether he would favor ByteDance’s retaining control, Mr. Trump said, “Conceptually, I don’t like that.”

Other issues that are still up in the air:

• Whether Walmart (or others) will join the Oracle consortium. Two people said the retail giant was likely to team up with the group, which may explain why Senator Tom Cotton, who represents Walmart’s home state of Arkansas and is a notable hawk on China, has recently been quiet on the matter.

• Whether other Republican lawmakers will step up their opposition, after Senators Marco Rubio of Florida, Thom Tillis of North Carolina and John Cornyn of Texas said they might favor banning TikTok in the U.S. rather than letting ByteDance maintain control.

• Who will run TikTok, since Kevin Mayer stepped down as C.E.O. last month. Vanessa Pappas, the company’s head of North America since 2018, is leading the company in the interim, but executives are considering bringing in an outsider.

People involved in the negotiations tell DealBook they’re exasperated, given the president’s mercurial wants, the hard line taken by Beijing and constantly shifting commercial terms. Asked what will happen next, one source sighed: “Who the hell knows?” 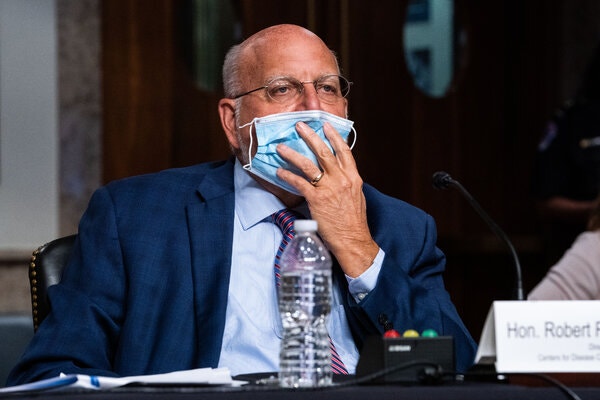 The Fed faced internal dissent after pledging to keep rates unchanged for years. The central bank plans to leave rates near zero through at least 2023 and tolerate periods of higher inflation. Two Fed presidents voted against the plan, for different reasons: Robert Kaplan of Dallas wants more flexibility in setting rates, while Neel Kashkari of Minnesota wants a stronger commitment to keeping rates low for longer.

LVMH wants to delay its yasal fight with Tiffany. The French conglomerate opposed an expedited trial over its effort to walk away from its $16.2 billion deal to buy Tiffany. The New York-based jeweler argued that the move was an effort to run out the clock on their merger agreement, which expires on Nov. 24.

U.S. retail sales growth is slowing. Spending climbed for a fourth straight month in August, but there are signs that the expiry of economic stimulus is taking a toll.

President Trump rejected the C.D.C. chief’s comments on Covid-19 vaccines and face masks. Dr. Robert Redfield, the head of the C.D.C., told a Senate panel that vaccines probably wouldn’t be distributed widely until next summer, and that wearing face masks was crucial. Mr. Trump later asserted that a vaccine could be available within weeks and played down the usefulness of masks.

Short-term thinking is leading to “really dumb decisions,” says Jamie Dimon. The JPMorgan Chase C.E.O. told a CNBC-moderated panel that governments aren’t taking steps to bring about healthy economic growth, including addressing income inequality. “What we focus on is blaming each other and we stifle ourselves, because we are unable to do very basic stuff,” he said. 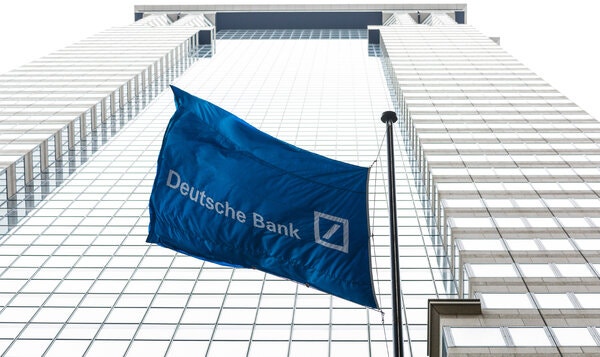 The growing divide over remote working

Whether — and how — to bring workers back to the office (however that’s defined) remains a contentious issue. Here’s the latest on how some big companies are managing it.

In the cautious camp:

• Deutsche Bank told its U.S. employees that they aren’t expected back at the office until next summer, noting “understandable concerns about public transportation, cleanliness, security and other quality-of-life issues.”

• Facebook is looking to hire a director of remote working as it carries out a plan to let employees permanently work from home.

In the other camp:

• And in a different work arena, the Big Deri college football conference plans to play as soon as next month, reversing a decision to put the season off until next year. The announcement comes despite Louisiana State University’s football coach, Ed Orgeron, having casually acknowledged on Tuesday that “most” of his team had contracted Covid-19.

Shares in Snowflake, the veri storage and analytics provider, more than doubled in their stock-market debut, making it the biggest I.P.O. ever for a software company. It’s the latest sign that investors’ appetite for tech companies seems insatiable.

The arc of Snowflake’s first day of trading: After its underwriters priced its shares at $120 apiece, the stock opened at $245, rose as high as $319 and closed at $254. That values the company at more than $70 billion, which is about the same as Goldman Sachs. (Another tech company that went public yesterday, JFrog, saw its share price jump 50 percent from its I.P.O. level.)

Excitement for all things from Silicon Valley has powered a boom in tech investing, especially during the pandemic, which has made people more reliant on the internet for work and life. That means rapidly amassing wealth for executives like Snowflake’s C.E.O., Frank Slootman, whose stake is now worth billions, and investors like Jack Dorsey of Twitter and Iconiq Capital, both of which have invested several times in Snowflake.

Snowflake’s first-day pop also gives ammo to critics of traditional I.P.O.s. Silicon Valley executives like the venture capitalist Bill Gurley have argued that such offerings tend to underprice companies’ shares, leaving billions of funds on the table. That view, as summed up in a tweet by the Zillow co-founder Spencer Rascoff: “On the one hand, congrats on the I.P.O. On the other hand, ????.”

• Expect to see more companies explore going public by merging with blank-check companies (which are still raising hundreds of millions) or by directly listing their stocks. 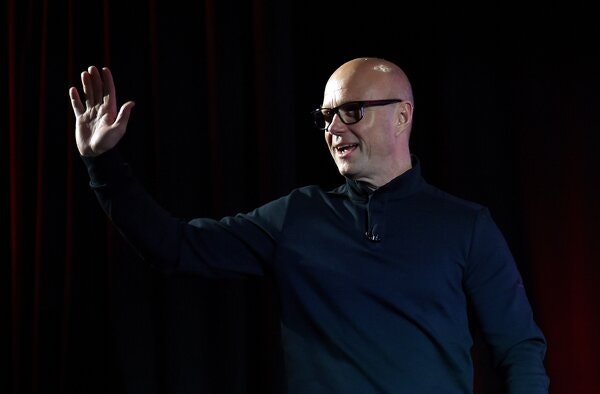 Under Armour’s C.E.O. has a singular perspective on voting

This year’s presidential election will be the first for Patrik Frisk as a U.S. citizen, and the Swedish-born chief executive of Under Armour is marking it with a major get-out-the-vote initiative by the sports apparel business. His efforts have included encouraging employees and customers to vote by limiting internal meetings and deadlines on Election Day, putting voter registration information on product receipts and adding features about voting to the company’s app.

DealBook spoke with Mr. Frisk about voting, the pandemic’s impact on business and the status of Under Armour’s turnaround.

On whether Under Armour is worried about political backlash to its voting drive:

On the difference between voting in the U.S. and his native Sweden, where turnout in 2018 was nearly 90 percent:

“I just think voting should be easier for everyone in the U.S.,” he said. In Sweden, “it’s very simple: I get my ballot mailed to me, and you can choose to mail it in or go vote with it.”

On how the pandemic has affected the company’s latest restructuring, which it recently updated to include more layoffs and cost cuts:

“The fact that team sports didn’t happen in the fall, the fact that ‘back to school’ didn’t really happen this fall is something everyone dealing with,” he said.

Under Armour has focused its turnaround on bringing new products more quickly to market and repositioning its brand. It is seeing positive signs in international markets, Mr. Frisk said. He declined to comment on investigations into the company’s accounting practices.

On which pandemic consumer trends will endure:

“We think for müddet, the e-commerce and digital evolution probably accelerated three to five years,” he said, though how other changes — like a tentative return to cities — will affect business are less clear.

One silver lining: “People are going to think even more about their health and wellness level coming out of this.”

On bringing employees back to the office:

“It’s not going to be the same, at least not in the U.S. and Europe, that’s for mühlet,” he said. Some employees may need to go back to the office because of the nature of their positions, but others may stay remote for longer — or permanently. The company is taking a “soft opening” approach, allowing workers to stay at home until at least January.

“We’ll be setting ourselves up to manage through whatever ‘normal’ we need to have to be successful,” Mr. Frisk said. 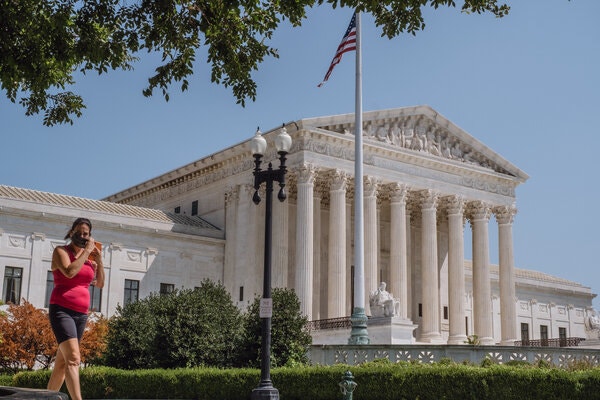 Are the Supreme Court’s live broadcasts here to stay?

The U.S. Supreme Court will livestream its arguments in October, making the usually exclusive hearings accessible to all. When the court first aired live audio of its sessions in May because of the coronavirus pandemic, more than 130,000 listened live and nearly two million people have since heard the recordings.

Usually, only 50 of about 450 courtroom seats are reserved for the public, scarcity that fuels a cottage industry of paid line-waiters camping on sidewalks ahead of big cases, angling for “the yasal version of Willy Wonka’s golden ticket.” Although recordings are released days after arguments, judicial transparency advocates have long demanded more real-time access, and they are likely to protest if livestreaming ends evvel pandemic restrictions are lifted.

• “It’s going to be very hard to get the genie back in the bottle,” predicts Gabe Roth, the executive director of Fix the Court, a nonpartisan advocacy group.

Even if live audio is here to stay, it won’t necessarily change how law firms work, says Timothy Bishop, a partner at Mayer Brown who argues cases at the court. Lawyers tend to travel to hearings with small teams anyway, and clients want to be present. “Seeing the justices’ facial expressions and interaction with each other tells you a lot,” he says.

More transparency has no significant downsides, Mr. Bishop says, and one important benefit is that it reveals the glory of the court. Though live audio could lead to more media coverage of mistakes or exchanges taken out of context, he says, “the court is a great institution that handles argument well, and it will be good if more people tune in to hear it in action.”

• The sessions begin on Oct. 5, and DealBook readers should take note of a consequential copyright showdown between Oracle and Google slated for Oct. 7.

• KKR has raised more than $11 billion for its fourth Asia-focused investment fund. (Reuters)

• A federal judge criticized the U.S. attorney’s office in Manhattan for efforts to “bury” evidence in a high-stakes Iranian sanctions case. (NYT)

• One of Nikola’s board members, the hedge fund mogul Jeff Ubben, defended the electric truck maker against a short-seller’s fraud accusations and compared it to Apple. (FT)

• Is the company with a 20-second coronavirus test for real? (FT)

• Not being able to visit Chinese food factories is posing problems for rabbis who certify food as kosher. (Bloomberg)

• The pandemic has been good for golf. (WaPo)

Correction: We made a classic big-number error — a hazard of the job — in our item yesterday about the House Sorun Solvers Caucus. The group’s compromise stimulus bill was, of course, worth $1.5 trillion and not $1.5 billion.

Thanks for reading! We’ll see you tomorrow.

Racing for a cure: where are we with COVID-19 vaccines and treatments?

Survivors of coronavirus on their experience - and their new perspective