Jodee Burton, a retired preschool teacher who now helps with her husband’s logging business, lives on a remote patch in the Upper Peninsula of Michigan, a state that has been embroiled in a partisan battle over how to respond to a pandemic that has killed nearly 7,000 people there and almost 200,000 nationwide.

Ms. Burton, 63, who is the mother of three grown children, is not convinced that there is a crisis — and she is certainly not happy with the efforts by her governor, Gretchen Whitmer, a Democrat, to require some people to wear masks or restrict where they can play and work.

“There’s only been three cases in Luce County and I know all three of them,” said Ms. Burton, whose family dog wears a Trump bandanna in place of a collar. “They have husbands and they sleep with these men every night, and none of them got it.”

From resistance to face masks and scorn for the science of the coronavirus to predicting the imminent arrival of a vaccine while downplaying the death count, President Trump and a sizable number of his supporters have aligned emphatically behind an alternate reality minimizing a tragedy that has killed an overwhelming number of Americans and gutted the economy.

This mix of denial and defiance runs contrary to the overwhelming evidence about the spread and toll of the virus, and it is at the center of Mr. Trump’s re-election effort as early voting begins in Minnesota, Virginia and other states. It is an outlook shared among his most loyal supporters and pushed by many of his allies in the political and news media establishment.

To some extent, this viewpoint reflects the resentments of Americans living in regions of the country, like upstate New York and the upper reaches of Michigan, that have been relatively untouched by the virus but have had to endure drastic business shutdown measures that have left many residents confined to their homes without jobs or income.

“The people who need to shelter in place should do so, but I do not feel that that should ruin the economy,” said Karla Mueller, a Republican and church custodian who lives in Fond du Lac, Wis. “I think it’s ruined a lot of people’s small businesses. I just don’t feel that that’s necessary.”

But it is also a direct result of the look-the-other-way message that the Trump administration has sent with increasing urgency, pollsters and strategists say, as the president faces a strong challenge to re-election from Joseph R. Biden Jr., his Democratic opponent. Mr. Trump has called on Twitter for people to “LIBERATE” states that have imposed stay-at-home orders, threatened to withhold aid from Democratic governors and undercut medical professionals who have cautioned against the use of unproven medical treatments and premature school reopenings.

He has attacked communities that have resisted reopening schools and business, and suggested the death count was either exaggerated or mainly a sorun in blue states.

The president’s critics say his confrontational approach has kept the country from forming a consensus about how to fight the worst public health crisis in more than 100 years.

“The emotion, the passion — it’s out of hand,” said Representative Debbie Dingell, Democrat of Michigan, who pointed to two violent episodes in her state that stemmed from disagreements over wearing masks. “People have been shot and killed. A security guard in a dollar store. There was another fight at Walmart. This is insane.”

“Honestly, the fact of the matter is if the president would wear a mask, he would save more lives than anyone knows because he is a leader,” she said. “And people would follow him.” 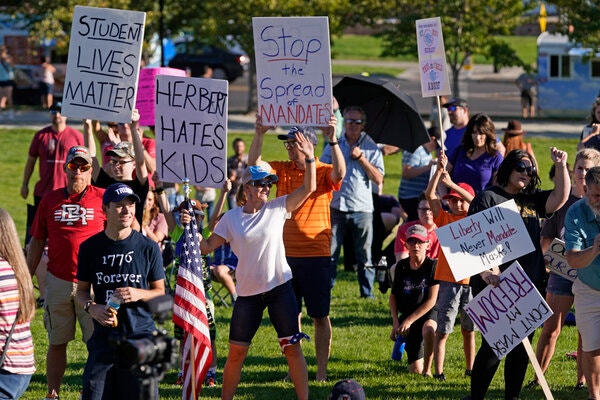 There is little doubt that much of Mr. Trump’s base embraces his attitude and shares his optimistic assessment of the country’s path to recovery. Polls show that Republicans approve of how he has handled the response to the virus by overwhelming margins and — unlike much of the country — think the United States has moved too slowly to reopen. A majority of them also support wearing masks, though not by the same margin as Democrats or the nation at large.

The evidence of these divisions can be seen as Mr. Trump has stepped up his campaign travels, ignoring the counsel of his own public health experts while mocking Mr. Biden for taking a cautious approach to holding large events. The president’s rallies are filled with people standing shoulder-to-shoulder, not wearing masks. At a rally this month in Latrobe, Pa., Mr. Trump made fun of Mr. Biden for wearing a mask. “It gives him a feeling of security,” he said to laughter.

The president ignored the governor of Nevada by holding an indoor rally near Las Vegas this month; the state has been devastated by the pandemic and its economic toll.

Images evoke a nation divided. A görüntü was recently shared widely on social media showing a demonstration in Utah where protesters said a local school mask mandate violated the Constitution and amounted to child abuse. There was Herman Cain, the business executive and onetime Republican presidential candidate, attending a Trump rally in Oklahoma while not wearing a mask; he died several weeks later after testing positive for the coronavirus.

Mr. Trump accepted his party’s nomination for a second term with a speech to Republicans crowded onto the White House lawn — again, most not wearing masks as they cheered the president and gaped at a fireworks display.

“President Trump was a terrible role model,” said former Gov. Rick Snyder of Michigan, a Republican who has said he will vote for Mr. Biden. Relatively few Republicans have challenged Mr. Trump on his handling of the pandemic, illustrating what Mr. Snyder said was a troubling culture of silence at a time when leaders should be making unifying appeals.

“He’s a bully, so he discourages people to speak up,” Mr. Snyder said. “In a democracy, we’re supposed to speak up in a respectful way.”

Even this somber moment in the history of the virus — reaching the threshold of 200,000 deaths — has become a subject of partisan dispute and conspiratorial dismissal.

“There’s been all kinds of cases where there was a motorcycle accident and, oh yeah, he died of Covid,” said Stephen Guentert, 52, a math teacher from Freeland, Mich., who attended a Trump rally last week. “No he did not. He died from a motorcycle accident. Or somebody was shot in the head and he’s listed as a Covid death. So if you take just the deaths that are strictly from Covid, there’s not that many. So, I’m not afraid of it.” 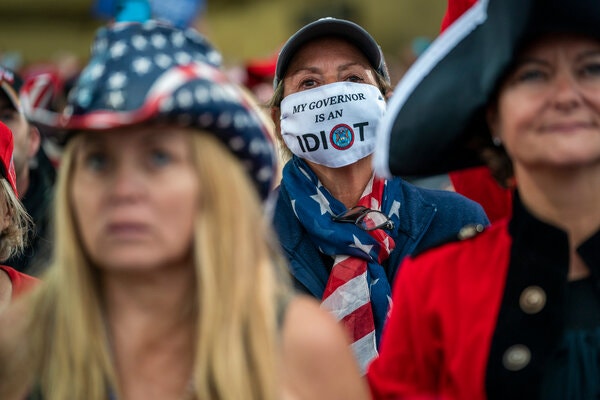 It is not just the president. His attorney general, William P. Barr, likened state lockdowns to slavery last week. The spokesman at the government agency responsible for fighting the pandemic accused scientists of sedition. Scientists who objected to published guidelines about testing for infections said they were shut down by superiors.

“Trump has made this harder,” said Bob Kerrey, a Democrat from Nebraska who served as a senator and a governor there and ran for president in 1992. “I don’t know how many people are dead because of him. If you ask the question, ‘Why are we having trouble getting Americans to wear a mask?’ look no further than 1600 Pennsylvania Avenue.”

“The message he is sending to these people is, ‘Don’t hisse any attention to this,’” she said. “He has been undermining scientists and science since he got into office. That has left his base willing to believe these conspiracy theories.”

The message has been reinforced by figures on Fox News and elsewhere in the pro-Trump news media.

Tucker Carlson told his viewers on Fox News the other night that Covid-19 was “not dangerous to the overwhelming number of people who are destroyed by the Covid restrictions.”

These disagreements reflect old and conflicting beliefs about the role of government in America. Leave-me-alone libertarianism and deep suspicion of an overly intrusive federal government have long animated conservatives and taken root in the frontier West. Now those resentments, fanned by Mr. Trump, are colliding with a contagious disease and the most contentious election in recent memory.

Mr. Trump’s dismissiveness of the science is not without political risks with his own base. Significant portions of Republican voters want states to exercise caution when reopening public services, and they harbor anxiety about another surge of virus infections.

“He’s creating conflict with the segment of voters in his base who are actually concerned about coronavirus,” said Nick Gourevitch, head of research for the Küresel Strategy Group, a Democratic polling firm. Republicans, he said, “are more splintered than Democrats are on Covid topics, which makes it hard for them to turn these battles into political winners.” 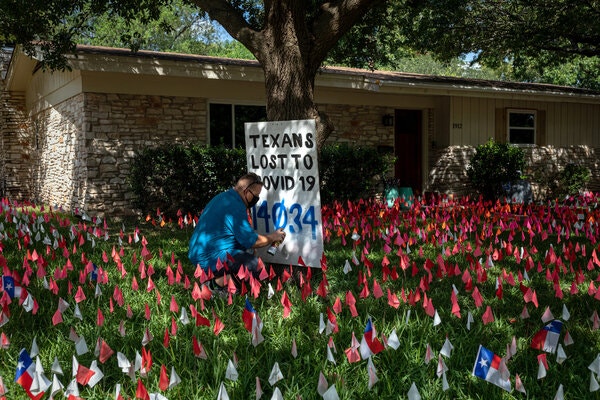 The response to the virus has been one of the major dividing lines between Mr. Biden and Mr. Trump, particularly after Mr. Trump was quoted in a book by Bob Woodward as saying that he realized the severity of the coronavirus in February but minimized it to the public. “If the president had done his job from the beginning, all these people would still be alive,” Mr. Biden said on CNN on Thursday night. “You lost your freedom ’cause he failed to act.”

Mr. Trump has assailed Mr. Biden, asserting — in a mischaracterization of his remarks — that his opponent would close down the American economy if elected president. (Mr. Biden, the former vice president, said he would follow the guidance of medical authorities on whether parts of the economy should be closed down.)

The president has tried to present himself as someone who has aggressively sought to confront the virus from the start. For any shortcomings or failures, he and his allies have tried to shift blame to others: China, the states, the Centers for Disease Control or the World Health Organization. And he continues to provide projections that experts warn are overly optimistic or misguided. Last week he said that a vaccine could be ready “very, very soon,” and insisted that the virus would simply vanish. “It’s going to disappear,” he said in an interview with ABC News.

Polling suggests that Democrats and independents don’t think so. But voters who support Mr. Trump see claims like those as consistent with their beliefs.

“I don’t believe that the federal government could have done much more,” said Linda Jackson, 60, a Trump supporter who lives in North Cornwall Township, in Lebanon County, Pa. “The president, in my opinion, thinks outside the box, and he enlisted public-private partnerships to get the equipment, the ventilators, the P.P.E., all the things that we needed on the local level to combat the virus. And he’s really ramped up this testing for a vaccine.

“I think he’s done a really good job,” she said.

Reporting was contributed by Kathleen Gray from McMillan and Freeland, Mich., Jon Hurdle from Philadelphia, Tom Kertscher from Milwaukee and Giovanni Russonello from New York.