As schools reopen and cold weather heightens the likelihood of a spike in coronavirus cases, nurses and doctors fear that shortages of the respirator masks, surgical gowns and disposable gloves needed to shield them from infection will return with a vengeance.

President Trump has sweeping powers to compel companies to produce protective gear and to guarantee that the federal government will hisse them for it — and as his election campaign intensifies, he has been boasting about aggressively using them. But in fact, most of his administration’s use of that authority, granted under the Cold-War Defense Production Act, has had nothing to do with the pandemic.

A White House report released last month claimed that Mr. Trump has wielded the act nearly 80 times to alleviate shortages of masks and other medical supplies.

“My administration has harnessed the full power of the Defense Production Act to achieve the greatest industrial mobilization since World War II,” Mr. Trump said at a briefing to announce the report’s release.

His daughter, Ivanka, said in her speech at the Republican National Convention that her father had “rapidly mobilized the full force of government and the private sector.”

Yet all but six of the examples cited in the report were either executive orders unrelated to the production of medical equipment or Defense Department expenditures that do not address the nation’s supply shortages.

U.S. government agencies routinely use the Defense Production Act. It is used thousands of times a year for things like purchasing critical military equipment and speeding up infrastructure repairs following hurricanes. But during the early months of the pandemic, the White House suggested that wielding that authority would have amounted to left-wing overreach.

Mr. Trump’s newfound embrace of the law comes as Joseph R. Biden, the Democratic nominee, has attacked the president’s failure to use it.

“Why in God’s name didn’t he move quicker on the Defense Production Act to provide P.P.E., the protective equipment for doctors and first responders?” Mr. Biden asked recently in an interview with CNN.

An analysis by the nonpartisan Congressional Research Service described the administration’s use of the act as “sporadic and relatively narrow,” noting that most of the $1 billion that Congress allocated under the Cares Act for purchases of medical equipment and protective gear under the Defense Production Act was shifted to the Defense Department, which spent most of the money — $688 million — on semiconductors, shipbuilding and space surveillance.

Dr. Nicole Lurie, a Biden campaign adviser who was the assistant secretary for preparedness and response at the Health and Human Services Department during the Obama administration, said: “No one is going to remember how much he slammed the D.P.A. in the past so the administration can create this illusion that they are using it. But the truth is that the White House is still failing to centrally manage the supply chain.”

Peter Navarro, the White House trade adviser who is the policy coordinator for the Defense Production Act, defended the administration’s decision to shift $688 million in Cares Act money to military contractors, saying the companies had been financially weakened by virus-related disruptions and were essential to the nation’s industrial defense base.

In an interview, he said the administration preferred to wield the law as a cudgel to encourage companies to act voluntarily in the national interest, though in one notable instance in April he used the act to prevent 3M from exporting respirator masks it had produced. The Justice Department has also used the law at least three times to prosecute individuals accused of hoarding or overcharging for essential medical goods.

“The most important lesson of the Trump administration using the D.P.A. is that of talking softly and carrying a big D.P.A. stick,” he said. “If I am trying to solve a sorun with company X or company Y and they get a call from me as the Defense Production Act policy coordinator, the response is usually ‘how can we help serve.’” 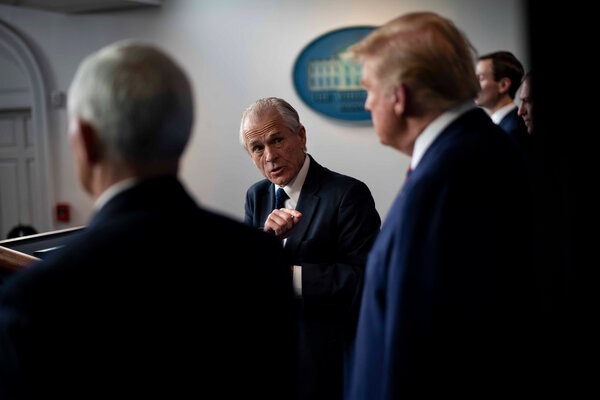 Although the dire shortages of medical gear have eased since the early months of the pandemic, nursing homes, hospitals chains and doctors in private practice say they are still struggling to obtain the masks and gowns that can shield workers and patients from infection. Health experts fear a rise in coronavirus infections this fall and the return of seasonal flu could intensify demands for personal protective equipment, or P.P.E., most of which is produced in China.

Get Us PPE, a nonprofit group that connects health providers to available medical gear, said that 77 percent of the clinics, long-term deva facilities and rural hospitals requesting goods in August reported that they had run out of at least one essential item, up from 65 percent in June.

In a report released earlier this month, the American Nurses Association found that one in three of the 20,000 members who responded to a survey in August said that they were short or completely out of the N95 masks that can filter out most virus particles. More than two-thirds said their employers required them to reuse their masks, a 6 percent increase since May, and more than 60 percent said they felt unsafe wearing masks designed for single use.

Ernest Grant, the association’s president, said the lack of domestic supplies had left nurses at the mercy of foreign-made masks that are sometimes poorly made or outright counterfeit and flawed.

“We’ve been urging the administration since mid-March to use the D.P.A. to ensure that everyone has adequate supplies so our nurses don’t have to worry that each time they put on a mask they are putting themselves, their patients and their families at risk of infection,” he said.

In late March, as coronavirus cases exploded and after weeks of criticism over federal inaction, the president reluctantly invoked the act but said he would only use it in a “worst-case scenario.” In the following days, he claimed to have used the law to spur General Motors to make ventilators — company officials say they were working on the deal a week before Mr. Trump claimed credit. He also falsely suggested the law allowed federal authorities to nationalize industries. “Call a person over in Venezuela, ask them how did nationalization of their businesses work out? Not too well,” he said. 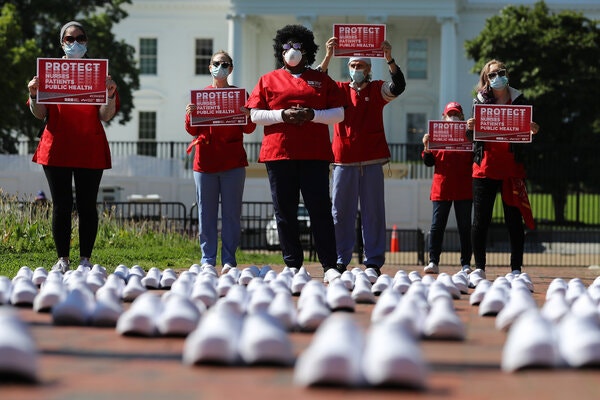 Created in 1950 during the Korean War to speed production of essential defense-related goods, the law has been reauthorized and amended more than 50 times to empower the Federal Emergency Management Agency, H.H.S. and other agencies to use it during national crises.

Mr. Trump’s disparagement of the law as disruptive to businesses — a view embraced by the United States Chamber of Commerce — contrasts with its frequent use. The Defense Department, on average, uses the law 300,000 times a year to ensure contractors prioritize government orders, and FEMA has employed it more than a thousand times for relief efforts following hurricanes and other national disasters, according to a report by the Department of Homeland Security.

“It’s not rocket science. All it does is put the government at the head of the line before the private sector,” said Larry Hall, who recently retired as the director of the Defense Production Act program division at FEMA. “We’re at war, and the enemy is called Covid. The question is do we have the guts that our grandfathers had to mobilize the economy of the United States against the against this enemy.”

The law gives the federal government the power to combat hoarding and price gouging and the ability to allocate vital goods in the national interest. It also includes a provision that protects industries from antitrust litigation when they cooperate with one another during a national emergency.

Critics say use of the provision allowing the government to take over the allocation of scarce medical supplies would have helped ameliorate the chaotic free-for-all during last spring that pitted governors, hospitals and municipal health departments against one another in competition for N95 respirator masks, hand sanitizer and disposable gloves.

Eight months into the pandemic, policy experts and industry officials said the federal government’s ability to orchestrate the allocation of vital goods is no longer as urgent. But they say employing its authority to give companies financial resources to produce more goods would ease shortages of protective gear, testing supplies and the syringes and glass vials needed for a potential vaccine. Such incentives would also help reduce American reliance on China, they said.

Scott Paul, president of the Alliance for American Manufacturing, an industry group that seeks to increase domestic production, said that many executives would welcome the financial incentives that are part of the Defense Production Act, a provision known as Title III.

“The Trump administration’s use of the D.P.A. has been sporadic, vindictive and too late,” he said. “They have not wielded the tool very effectively, which is striking to me because in most other respects, the administration hasn’t been afraid to wield executive power.” 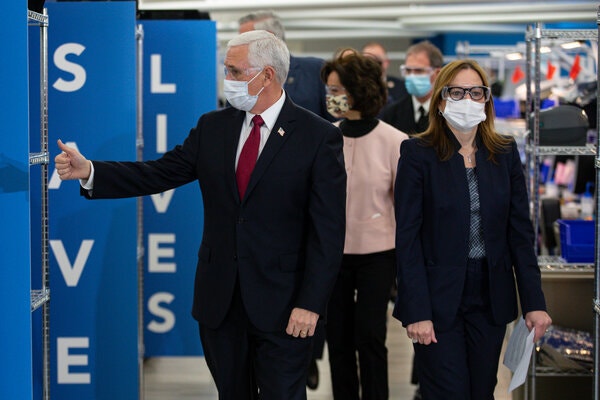 Title III has been used a handful of times in recent months, including for a $133 million contract for three companies, 3M, Honeywell International and Owens & Minor, to make N95 masks, and a contract for two medical supply companies, BD and Quidel, to ramp up production of rapid coronavirus test kits for nursing homes. In May, the administration announced a $75 million contract to Puritan Medical Products to expand production of nasal test swabs.

Other initiatives have run into trouble. A deal to provide Eastman Kodak a $765 million loan for the production of pharmaceutical ingredients announced with great fanfare by Mr. Trump in July has been put on hold while the Securities and Exchange Commission investigates allegations that insider trading prompted a meteoric rise in the company’s stock. Democrats in the House are also looking into the loan.

Then there is the star-crossed deal Mr. Navarro negotiated in April with the medical device maker Royal Philips, which was awarded a $647 million contract to make thousands of ventilators for H.H.S. under an accelerated schedule. Last week, the company announced that the remainder of the contract had been abruptly canceled, and Philips said it would only deliver 12,300 of the 43,000 machines that had been ordered.

A House Oversight subcommittee has said it will investigate the deal with Philips.

A spokeswoman for H.H.S. declined to comment but said the agency was conducting an internal probe into the contract.

'A defining moment for Germany, Europe, and the world': Germany marks 30 years since reunification

Can Covid Lead to Impotence?

Women’s Periods May Be Late After Coronavirus Vaccination, Study Suggests

Will ‘Forever Boosting’ Beat the Coronavirus?