Grand Slam tennis is back.

In a wild comeback that seemed improbable and predictable, lost and then found, Dominic Thiem battled from two sets down to win the United States Open on Sunday night over Alexander Zverev, 2-6, 4-6, 6-4, 6-3, 7-6 (6).

Thiem edged Zverev in a fifth-set tiebreaker that capped a four-hour marathon that included golden opportunities for Zverev to win and left both men battling cramps in the final moments.

Thiem, a 27-year-old Austrian, won his first Grand Slam tournament in his fourth major final. A critical factor was that this time neither Roger Federer, Rafael Nadal nor Novak Djokovic stood on the other side of the net.

Thiem, one of a group of promising younger players who have long failed to topple those aging giants, became the first currently active player in his 20s to win a Grand Slam event. He is the first new Grand Slam champion in six years.

With Zverev serving for the match at 5-3 in the fifth set, Thiem won the first two points to put the big German on the ropes, then forced him into one too many errors as Zverev could not close the door for the championship.

Although this tournament may always be known for the absence of Federer and Nadal and Djokovic’s disqualification for unintentionally hitting a line judge with a ball, Thiem’s name will be etched in the same font as past champions. There was no discount on his $3 million winner’s check.

If others see this title as diminished in some way, Thiem is not among them. “I achieved a life goal and a dream I had for many, many years,” he said.

The game’s ultimate pressure cooker, a fifth-set tiebreaker, was a microcosm of the match itself. Zverev took an early lead, Thiem battled back to take control, then Zverev fought off two match points to knot it at 6-6. But Thiem slammed one last searing forehand winner and Zverev sent one last backhand wide to give Thiem the championship. 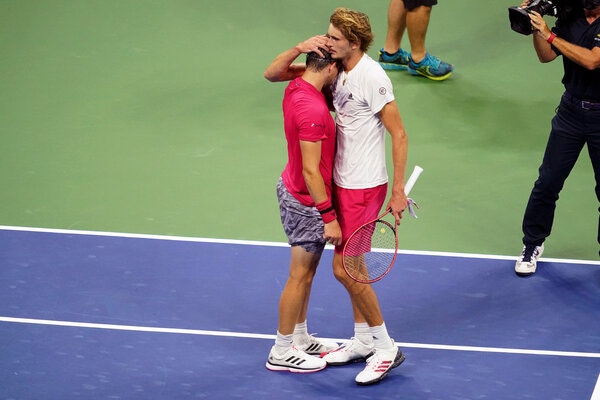 Thiem collapsed when it was over. Minutes later, Zverev broke into tears during the trophy ceremony as he thanked his parents. “It’s just tough, you know,” he said. “I wish one day that I can bring the trophy home.”

“We both deserved it,” Thiem said.

For years, the leaders of the sport and its fans have wondered what tennis will look like evvel the storied careers of Djokovic, Federer and Nadal finally end. If Sunday was an indication, there will be an endless, nerve-rattling brawl to see who can fill their shoes.

No one can, of course. It is unlikely that tennis will ever have three players vying for the title of the sport’s greatest playing at evvel. But under a clear sky and an unfortunately empty Arthur Ashe Stadium because of the coronavirus pandemic, Zverev and Thiem showed that the next phase of this sport will not be short on the high-stakes drama and tests of nerves that have defined the game for decades, regardless of who is on the court.

Because of the pandemic, the U.S. Open went from a raucous celebration of the game to a quirky display of tennis purity, played without ticket-buying spectators in cavernous empty stadiums. Without crowds creating the usual ambient rumble, matches played out amid the rattle of Long Island Rail Road trains roaring past the stadium and the beep-beep-beep of trucks going in reverse in the parking lot. 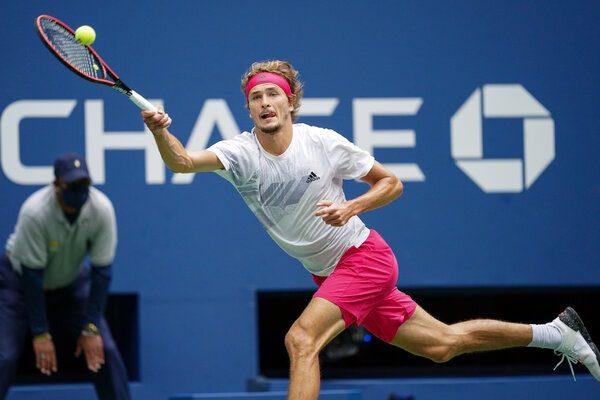 On paper, the match was Thiem’s to lose. Thiem had dispatched Daniil Medvedev, the top opponent remaining after Djokovic was disqualified, in three sets in the semifinals. He had dropped just one set in six matches. His blistering backhand became the shot no one could answer, the one that left the best players in the world shaking their heads, their spirits crushed as yet another winner whizzed down a sideline.

Zverev, on the other hand, had looked eminently beatable, especially during his error-filled semifinal, when he was down two sets and hitting 75 mile-an-hour second serves into the net. He somehow escaped — and laughed when he did, not quite believing he could have played so poorly and still landed in a Grand Slam final.

But it was a different Thiem who arrived for the final Sunday, and a different Zverev. At least early on.

For two sets, Zverev rode the power of his first serve and limited his errors in a crisp, efficient performance that belied his reputation as a player prone to inconsistency in the biggest moments despite his immense athletic gifts.

Thiem, who had cruised through the tournament with frightening precision, struggled to find his rhythm, missing long and wide on shots that had pasted the lines for nearly two weeks.

And then everything began to go sideways for Zverev.

Watching a top player lose a two-set lead with a Grand Slam on the line is like witnessing someone undergoing a cruel form of psychological torture. As the match went on, there were early hints that Thiem would come alive and Zverev would combust.

Zverev’s game began to show cracks late in the second set, when he served for the set and missed an easy volley and then double-faulted. He took the set on his next service game, but the faltering reminded Thiem (if he indeed needed reminding) that Zverev had never closed one of these Grand Slam finals before. In fact, he had not played one.

Early in the third set, Zverev missed another easy volley on a break point and Thiem had his lifeline. Swinging with the freedom of someone with his back against the wall and nothing to lose, he began finding his targets and forcing Zverev to win points on his own.

As he took a seat after losing the set, Zverev looked at his coaches, his eyes wide open. Was this really happening? 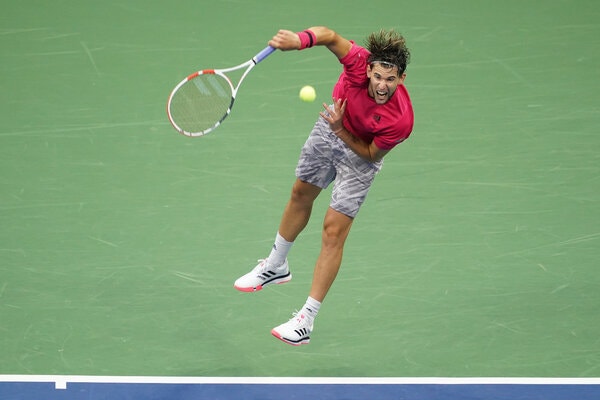 It was. Eight games later, Zverev double-faulted at deuce and sent a soft forehand into the middle of the net that allowed Thiem to serve for the fourth set.

Quickly, it was tied up. But just when it looked like Thiem was going to run away and hide, breaking Zverev in the first game of the fifth set, he struggled with prosperity, as Zverev battled, then seemingly broke away, giving himself a chance to serve for the match at 5-3. The fun, of course, was just starting. Capitalizing on Zverev’s twitchy serve and tentative play from the baseline, Thiem knotted the match at 5-5.

What ensued was that mix of grace and tension, of power and nerves, that few other sports provide. The only question remaining was who would crack last.

With a soft ball floating around his eyes along the left sideline, Zverev did what all çağdaş players do, running around his backhand and aiming a big forehand straight down that line. Evvel more, he fumbled the chance, sending the ball far beyond the baseline.

Now it was Thiem’s chance to finish it off, serving at 6-5. He did not handle prosperity all that well, either, dropping the first two points and giving Zverev two chances to force a tiebreaker. He needed both, and on the second one he ripped a forehand winner to send this match to its fitting end.

The question now is where Thiem goes from here, especially at this moment when the Big Three — Federer, Nadal and Djokovic — are all in their 30s and have probably won most of their major titles.

Tennis throws up the occasional surprising champion, especially in these moments of transition, when one set of greats is in its twilight and the next set has yet to rise, players who get that one Grand Slam title and then don’t lift another trophy like it again.

There was Thomas Johansson of Sweden, who won in Australia in 2002, as Andre Agassi began to fade and Federer had yet to rise. Gastón Gaudio of Argentina grabbed the French Open title just before Nadal became the king of clay. Goran Ivanisevic, in 2001, and Lleyton Hewitt, in 2002, won Wimbledon just before Federer took over Centre Court for five straight years, and Andy Roddick won the 2003 U.S. Open before Federer won five consecutive titles in New York.

This could mark a changing of the guard with the arrival of a new, potent force in the game. Or it could be an anomaly, the product of a bizarre year and the absence of Federer, Nadal and eventually Djokovic.

At U.S. Open Wheelchair Finals, Players Are Glad the Events Were Held at All

This U.S. Open Will Be Judged by the Future of Osaka and Thiem