WASHINGTON — On June 30, as the coronavirus was cresting toward its summer peak, Dr. Paul Alexander, a new science adviser at the Department of Health and Human Services, composed a scathing two-page critique of an interview given by a revered scientist at the Centers for Disease Control and Prevention.

Dr. Anne Schuchat, a 32-year veteran of the C.D.C. and its principal deputy director, had appealed to Americans to wear masks and warned, “We have way too much virus across the country.” But Dr. Alexander, a part-time assistant professor of health research methods, appeared mühlet he understood the coronavirus better.

“Her aim is to embarrass the president,” he wrote, commenting on Dr. Schuchat’s appeal for face masks in an interview with the Journal of the American Medical Association.

“She is duplicitous,” he also wrote in an email to his boss, Michael R. Caputo, the Health and Human Services Department’s top spokesman who went on medical leave this week. He asked Mr. Caputo to “remind” Dr. Schuchat that during the H1N1 swine flu outbreak in 2009, thousands of Americans had died “under her work.”

Of Dr. Schuchat’s assessment of Covid-19’s dangers, he fumed, wrongly, “The risk of death in children 0-19 years of age is basically 0 (zero) … PERIOD … she has lied.”

Dr. Alexander’s point-by-point assessment, broken into seven parts and forwarded by Mr. Caputo to Dr. Robert R. Redfield, the C.D.C. director, was one of several emails obtained by The New York Times that illustrate how Mr. Caputo and Dr. Alexander attempted to browbeat career officials at the C.D.C. at the height of the pandemic, challenging the science behind their public statements and attempting to silence agency staff.

Far from hiding what they knew about the virus’s danger, as Bob Woodward’s new book contends President Trump was doing, the emails seem to indicate that aides in Washington were convinced of their own rosy prognostications, even as coronavirus infections were shooting skyward.

At the same time, Mr. Caputo moved to punish the C.D.C.’s communications team for granting interviews to NPR and attempting to help a CNN reporter reach him about a public-relations campaign. Current and former C.D.C. officials called it a five-month campaign of bullying and intimidation. 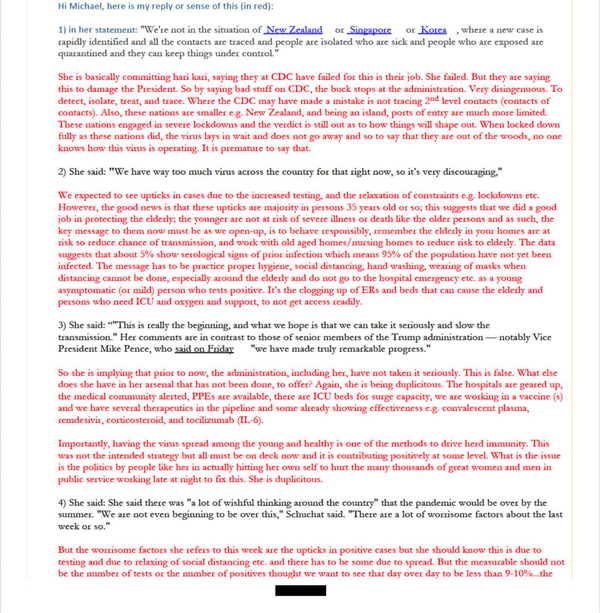 Read the Email Between Caputo and Dr. Alexander

For instance, after Mr. Caputo forwarded the critique of Dr. Schuchat to Dr. Redfield, C.D.C. officials became concerned when a member of the health department’s White House liaison office — Catherine Granito — called the agency to ask questions about Dr. Schuchat’s biography, leaving the impression that some in Washington could have been searching for ways to fire her.

In another instance, Mr. Caputo wrote to C.D.C. communications officials on July 15 to demand they turn over the name of the press officer who approved a series of interviews between NPR and a longtime C.D.C. epidemiologist, after the department in Washington had moved to take ownership of the agency’s pandemic veri collection.

“I need to know who did it,” Mr. Caputo wrote. A day later, still without a reply, Mr. Caputo wrote back. “I have not received a response to my email for 20 hours. This is unacceptable,” he said. “I need this information to properly manage department communications. If you disobey my directions, you will be held accountable.”

On Wednesday, Mr. Caputo went on leave from the department, just days after he attacked C.D.C. scientists during a bizarre Facebook görüntü in which he predicted armed insurrection after the election and encouraged his followers to stock up on ammunition.

C.D.C. scientists “haven’t gotten out of their sweatpants except for meetings at coffee shops” to plot “how they’re going to attack Donald Trump next,” Mr. Caputo said in the görüntü.

The department also announced that Dr. Alexander would leave the government.

On Friday, a department spokeswoman referred The Times to its Wednesday statement announcing Mr. Caputo’s leave and Dr. Alexander’s departure. She added that Mr. Caputo, in his comments about interview approvals, had been trying to make müddet that the C.D.C. followed protocols dating to prior administrations that the department clear interview requests for health officials. The C.D.C. did not have an immediate comment, nor did Mr. Caputo.

In the months leading up to their exits, the two had routinely worked to revise and delay the C.D.C.’s closely guarded and internationally admired health bulletins, called Morbidity and Mortality Weekly Reports, in an effort to paint the administration’s pandemic response in a more positive light.

Far from apologetic, Dr. Alexander told The Globe and Mail of Toronto this week that the C.D.C. had written “pseudoscientific reports” and that he was better suited to examine veri than agency scientists.

“None of those people have my skills,” Dr. Alexander said. “I make the judgment whether this is crap.”

The judgments he rendered — and the punishments that Mr. Caputo appeared intent to mete out — had a demoralizing effect on the agency.

One C.D.C. communications official became so worried about Mr. Caputo’s threat that she wrote to other senior staff asking how to reply, saying that she was “uncomfortable turning over our employee’s name to Mr. Caputo, given the hostility of the message.”

In another email to an agency communications officer who had directed a CNN reporter to contact Mr. Caputo about a vaccine public relations campaign, Mr. Caputo shot back, “In what world did you think it was your job to announce an administration public service announcement campaign to CNN?”

The C.D.C. press official then apologized, which did not satisfy Mr. Caputo. “We will discuss this on a teleconference tomorrow. I want your H.R. representative in attendance,” he wrote. He then scolded the official for removing Dr. Redfield from the email thread after Mr. Caputo had added the director in a prior email.

In the emails obtained by The Times, Mr. Caputo repeatedly added Dr. Redfield, who was overseeing an 11,000-person agency, to email chains about news media disputes. People familiar with the emails said it was an attempt to use Dr. Redfield to shame his own staff.

People familiar with Dr. Redfield’s responses to the emails said that he would call senior aides sounding resigned to the orders and asking how to navigate Mr. Caputo’s demands. Often, he tried to delay or ignore Mr. Caputo until the tension subsided.

Perhaps most illuminating in the emails was the way the top officials at the C.D.C. saw the disease in fundamentally different ways than confidants and loyalists of Mr. Trump. In the interview that provoked Mr. Caputo and Dr. Alexander, Dr. Schuchat referred to “a lot of wishful thinking around the country that, ‘Hey, summer, everything is going to be fine, we’re over this.’”

“And we are not even beginning to be over this,” she said. “I think we need to continue to learn and continue to apply what we’re learning and be humble about our assumptions.”

At the time of her interview, the nation was setting record levels of new infections, and was weeks away from an even more catastrophic peak of almost 70,000 new cases a day. States such as Arizona were pausing the reopening of their businesses.

That portrait of the virus was at odds with the one the White House had strained to present. The day Dr. Schuchat lamented there was “way too much virus across the country,” Kayleigh McEnany, the White House press secretary, told reporters, “we’re aware that there are embers that need to be put out.”

Mr. Trump said in an interview with Fox Business Network that week that he believed the virus was “at some point” going to “sort of just disappear, I hope.”

Dr. Alexander also had his own ideas of the virus’s staying power. He disputed Dr. Schuchat’s claim that children were vulnerable to it. Studies have repeatedly demonstrated that while it is rare, the virus can be lethal to children, who can readily transmit it to more vulnerable family members.

“It also causes no symptoms as it is so mild … you don’t even know you have it,” Dr. Alexander wrote. “Many people never knew they had it. Not one indication. It is very false her statement that it causes death in children.”

At one point in his response to Dr. Schuchat, Dr. Alexander appeared to endorse the largely rejected strategy of “herd immunity,” or allowing the virus to freely spread until enough people develop antibodies that it dies for lack of human hosts.

“Importantly, having the virus spread among the young and healthy is one of the methods to drive herd immunity,” he wrote. “This was not the intended strategy but all must be on deck now and it is contributing positively at some level.”

The clashes between the White House and C.D.C. intensified this week, when Mr. Trump publicly slapped down congressional testimony Dr. Redfield gave, in which he praised masks and estimated that a vaccine might not be widely available to the public until the middle of 2021.

“I think he made a mistake when he said that,” Mr. Trump told reporters. “It’s just incorrect information.” A vaccine would go “to the general public immediately,” the president insisted, and “under no circumstance will it be as late as the doctor said.”

'It's a knife in our backs': Confusion and anger in Poland over law on religious slaughter

Can Covid Lead to Impotence?

Women’s Periods May Be Late After Coronavirus Vaccination, Study Suggests

Will ‘Forever Boosting’ Beat the Coronavirus?