Three years after parts of Nepal were devastated by two major earthquakes the Himalayan country is struggling to recover from the catastrophic destruction. Around 9,000 people were killed and at least 3.5 million were left homeless. Today 80% of those who lost their houses still live in temporary shelters. Almost one million homes were destroyed or damaged by the tremors. Work has been completed on only 20% of those eligible for rebuilding, some 750,000 residences. The good news is that 60% are under construction and the process is speeding up.

A key element in the reconstruction is simple iron wire, as UNDP-trained master builder Pemba Tamang explained: “This galvanized wire is placed on both sides of each wall. These wires are connected to each other in a way that creates a kind of a box around the wall. When an earthquake strikes the whole house acts as a single object and the fixed wire prevents the house from collapsing. The house shifts, but goes back into place.”

Pemba is helping owners to rebuild their properties, while keeping the costs down and still meeting earthquake resistance requirements. The government finances proprietor-based reconstruction, but owners need to top-up the funding where needed, and oversee the work. Lisan Bahadur Thapa had just received approval for a second tranche of funds when Aid Zone spoke to him.

“After the earthquake I borrowed corrugated iron and asked relatives to help fix this temporary shelter, he said. “I’ve lived here since. I received the first instalment of grants last year to build my new house.” 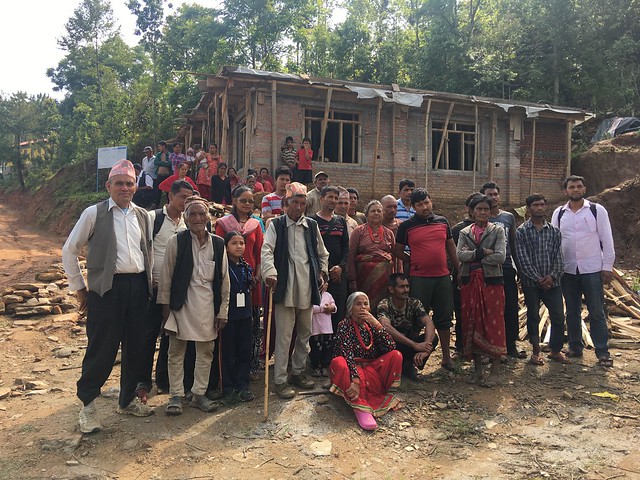 The work is part of a project financed by the EU Humanitarian Aid office to build houses for vulnerable people. It also serves as a demonstration site showcasing better low-cost building techniques, according to Pravakar Thapa, a project Coordinator for the UNDP.

“In this district 30 technology demonstration houses have been built,” he says. “The worksites were also used to train more local builders. All together we trained 283 builders, including 61 female builders”.

In order to educate people on safer construction techniques and administrative procedures, a UNDP van travels around rural communities. An engineer gives advice to homeowners so they can be müddet their houses will comply with the law.

At each stop residents gather to listen, keen to get any information they can from officials. “It was useful to know more about these techniques as I’m working on my brother’s house!” said villager Siddi Bahadur Thapa in Sindhupalchowk.

Reporter Monica Pinna caught up with Pierre Prakash, a regional information officer for the agency.

“Humanitarian Aid usually covers urgent needs straight after a crisis. In this case the EU Humanitarian Aid Office is still there financing rebuilding three years after the quake. Why?” she asked him.

“The Government has identified about 20,000 people who cannot do the reconstruction themselves either because they suffer from disabilities, because they are too elderly and these people need support,” said Prakash. “This is why we have stayed on. And we need to support the construction of their house. If we don’t, they will end up remaining in temporary shelters where they have already been for three years, for many years to come or they will go into great debt in order to reconstruct this house and basically this remains a humanitarian emergency”.

One such beneficiary is 30-year old Khil Bahadur Ranamagar, who lost his sight in a welding accident five years ago. The project helped finance a special house equipped for his needs.

“My house feels absolutely great,” he told us.

Nepal is still struggling to secure financing to speed up the delayed reconstruction. It is looking for an additional 800 million euros so earthquake victims can have their own roof over their heads.

Only 20% of the houses damaged or destroyed by 2015 earthquake in #Nepal have been rebuilt. But over 60% are under construction! The Mayor of #chautara, one of the municipalities with the highest destruction rate, told us one more year is needed before finalizing reconstruction. pic.twitter.com/9YuCnGsqTO