PARIS — In the early days of the pandemic, President Emmanuel Macron exhorted the French to wage “war” against the coronavirus. Today, his message is to “learn how to live with the virus.”

From full-fledged conflict to cold war containment, France and much of the rest of Europe have opted for coexistence as infections keep rising, summer recedes into a risk-filled autumn and the possibility of a second wave haunts the continent.

Having abandoned hopes of eradicating the virus or developing a vaccine within weeks, Europeans have largely gone back to work and school, leading lives as normally as possible amid an enduring pandemic that has already killed nearly 215,000 in Europe.

The approach contrasts sharply to the United States, where restrictions to protect against the virus have been politically divisive and where many regions have pushed ahead with reopening schools, shops and restaurants without having baseline protocols in place. The result has been nearly as many deaths as in Europe, though among a far smaller population.

Europeans, for the most part, are putting to use the hard-won lessons from the pandemic’s initial phase: the need to wear masks and practice social distancing, the importance of testing and tracing, the critical advantages of reacting nimbly and locally. All of those measures, tightened or loosened as needed, are intended to prevent the kind of national lockdowns that paralyzed the continent and crippled economies early this year.

“It’s not possible to stop the virus,” said Emmanuel André, a leading virologist in Belgium and former spokesman for the government’s Covid-19 task force. “It’s about maintaining equilibrium. And we only have a few tools available to do that.”

He added, “People are tired. They don’t want to go to war anymore.”

Martial language has given way to more measured assurances.

“We are in a living-with-the-virus phase,” said Roberto Speranza, the health minister of Italy, the first country in Europe to impose a national lockdown. In an interview with La Stampa newspaper, Mr. Speranza said that though a “zero infection rate does not exist,” Italy was now far better equipped to handle a surge in infections.

“There is not going to be another lockdown,” Mr. Speranza said. 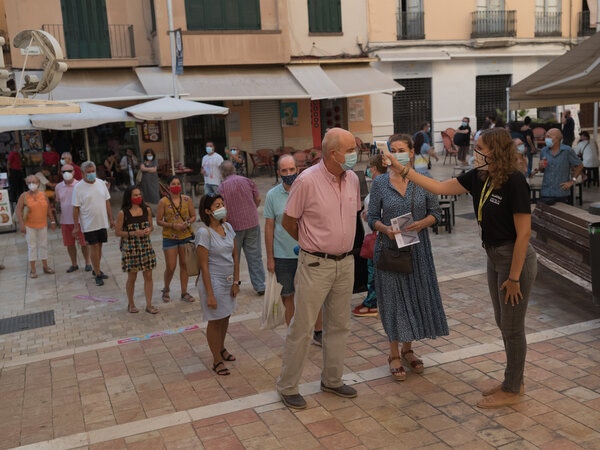 New infections have soared in recent weeks, especially in France and in Spain. France recorded more than 10,000 cases on a single day last week. The jump is not surprising since the overall number of tests being performed — now about a million a week — has increased steadily and is now more than 10 times what it was in the spring.

The death rate of about 30 people a day is a small fraction of what it was at its peak when hundreds and sometimes more than 1,000 died every day in France. That is because those infected now tend to be younger and health officials have learned how to treat Covid-19 better, said William Dab, an epidemiologist and a French former national health director.

“The virus is still circulating freely, we’re controlling poorly the chain of infections, and inevitably high-risk people — the elderly, the obese, the diabetic — will end up being affected,” Mr. Dab said.

In Germany, too, young people are overrepresented among the rising cases of infections.

While the German health authorities are testing over a million people a week, a debate has started over the relevance of infection rates in providing a snapshot of the pandemic.

At the beginning of September, only 5 percent of confirmed cases had to go to the hospital for treatment, according to veri from the country’s health authority. During the height of the pandemic in April, as many as 22 percent of those infected ended up in hospital deva.

Hendrik Streeck, head of virology at a research hospital in the German city of Bonn, cautioned that the pandemic should not be judged merely by infection numbers, but instead by deaths and hospitalizations.

“We’ve have reached a phase where the number of infections alone is no longer as meaningful,” Mr. Streeck said.

Much of Europe was unprepared for the arrival of the coronavirus, lacking masks, test kits and other basic equipment. Even nations that came out better than others, like Germany, registered far greater death tolls than Asian countries that were much closer to the source of the outbreak in Wuhan, China, but that reacted more quickly.

National lockdowns helped get the pandemic under control across Europe. But infection rates began rising again over the summer after countries opened up and people, especially the young, resumed socializing, often without adhering to social-distancing guidelines. 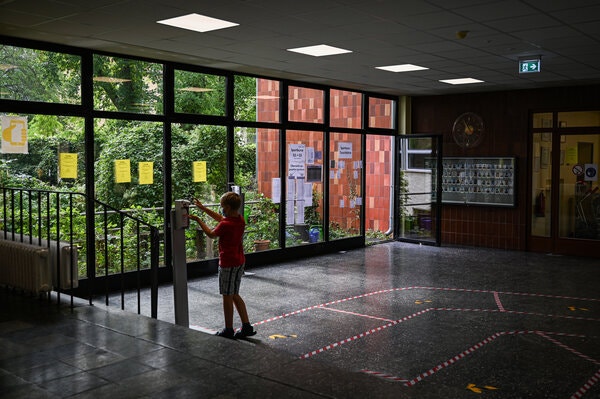 Even as infections have been rising, Europeans have returned to work and to school this month, creating more opportunity for the virus to spread.

“We control infection chains better compared to March or April when we were completely powerless,” said Mr. Dab, the former French national health director. “Now the challenge for the government is to find a balance between reviving the economy and protecting people’s health.”

“And it’s not an easy balance,” Mr. Dab added. “They want to reassure people so they’ll go back to work, but at the same time, we have to make them worried so that they’ll keep respecting preventive measures.’’

Among those measures, masks are now widely available across Europe, and governments, for the most part, agree on the need to wear them. Early this year, faced with shortages, the French government discouraged people from wearing masks, saying they did not protect wearers and could even be harmful.

Wearing a face covering has become part of the lives of Europeans, most of whom last March still regarded with suspicion and incomprehension mask-wearing tourists from Asia, where the practice has been widespread for the past two decades.

Instead of applying national lockdowns with little regard to regional differences, the authorities — even in a highly centralized nation like France — have begun responding more rapidly to local hot spots with specific measures.

On Monday, for example, Bordeaux officials announced that, faced with a surge in infections, they would limit private gatherings to 10 people, restrict visits to retirement homes and forbid standing at bars.

In Germany, while the new school year has started with mandatory physical classes around the country, the authorities have warned that traditional events, like carnival or Christmas markets, may have to be curtailed or even canceled. Soccer games in the Bundesliga will continue to be played without fans until at least the end of October.

In Britain, where mask wearing is not especially widespread or strictly enforced, the authorities have tightened the rules on family gatherings in Birmingham, where infections have been rising. In Belgium, people are restricted to limiting their social activity to a bubble of six people. 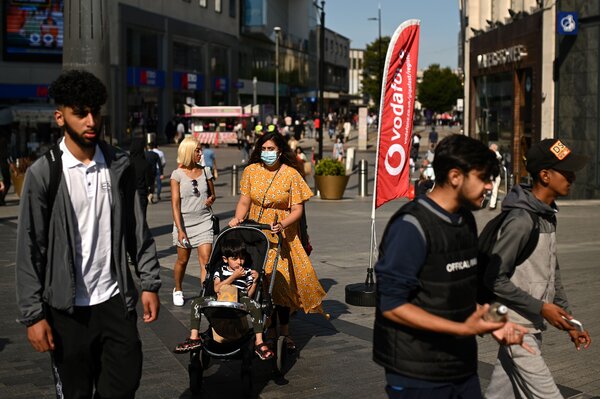 In Italy, the government has sealed off villages, hospitals or even migrant shelters to contain emerging clusters. Antonio Miglietta, an epidemiologist who conducted contact tracing in a quarantined building in Rome in June, said that months of battling the virus had helped officials extinguish outbreaks before they got out of control, the way they did in northern Italy this year.

Governments still need to get better at other things.

At the peak of the epidemic, France, like many other European nations, was so desperately short of test kits that many sick people were never able to get tested.

Today, though France carries out a million tests a week, the widespread testing has created delays in getting appointments and results — up to a week in Paris. People can now get tested regardless of their symptoms or the history of their contacts, and officials have not established priority tests that would speed up results for the people at highest risk to themselves and others.

“We could have a more targeted testing policy that would probably be more useful in fighting the virus than what we’re doing now,” Lionel Barrand, president of the Union of Young Medical Biologists, said, adding that the French government should restrict the tests to people with a prescription and engage in targeted screening campaigns to fight the emergence of clusters.

Experts said that French health officials must also greatly improve contact-tracing efforts that proved crucial in reining in the spread of the virus in Asian nations. 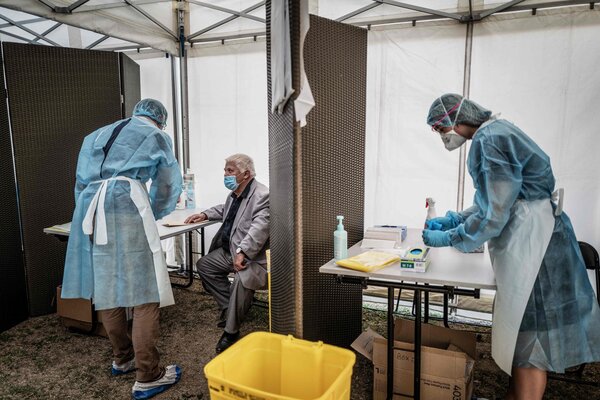 After the end of its two-month lockdown in May, France’s social security system put in place a manual contact-tracing system to track infected people and their contacts. But the system, which relies greatly on the skills and experience of human contact tracers, has produced mixed results.

At the start of the campaign, each infected person gave the contact tracer an average of 2.4 other names, most likely family members. The campaign improved steadily as the number of names rose to more than five in July, according to a recent report by the French health authorities.

But since then, the average figure has fallen gradually to less than three contacts per person, while the number of Covid-19 confirmed cases has increased tenfold in the meantime, rising from a seven-day average of about 800 new cases per day in mid-July to an average of some 8,000 per day currently, according to figures compiled by The New York Times.

Jérôme Carrière, a police officer who was visiting Paris from his home in Metz, in northern France, said it was a good sign that most people were now wearing masks.

“In the beginning, like all French people, we were shocked and worried,” Mr. Carrière, 55, said, adding that two older family friends had died of Covid-19. “And then, we adjusted and went back to our olağan lives.”

Reporting was contributed by Constant Méheut and Antonella Francini from Paris, Matt Apuzzo from Brussels, Gaia Pianigiani and Emma Bubola from Rome, and Christopher F. Schuetze from Berlin.