LOUISVILLE, Ky. — A grand jury weighing evidence in one of the country’s most contentious police shootings indicted a former Louisville police detective on charges of reckless endangerment on Wednesday for his role in the raid on the home of Breonna Taylor, but the two officers who shot Ms. Taylor six times faced no charges.

Protesters insisting that all three officers be held to account for Ms. Taylor’s death poured into the streets in Louisville, where the botched drug raid took place in March, as well as in New York, Chicago and other cities.

The three white officers fired a total of 32 shots after they stormed her apartment with a warrant. Prosecutors found that the two officers who shot Ms. Taylor, who was Black, were justified in their use of force because they had identified themselves as officers and had then come under fire from her boyfriend, who said he thought it was intruders forcing their way inside. The charges against former Detective Brett Hankison were for firing recklessly into a neighbor’s apartment.

Ms. Taylor’s death, which came months before George Floyd was killed by the Minneapolis police, became a rallying cry for racial justice protesters nationwide. On Wednesday afternoon, hundreds of demonstrators chanted Breonna Taylor’s name between sobs and scowls as they wound their way through the streets of Louisville. They carried signs that said “abolish police” and “Black lives matter.” Dozens of cars followed, honking their horns.

For more than two hours, the police followed in silver cruisers without intervening. But eventually a line of officers in riot gear confronted protesters, released chemical agents and arrested several people in the crowd.

At a news conference on Wednesday in Frankfort, Kentucky’s attorney general, Daniel Cameron, walked through the grand jury’s decision in detail in an effort to defuse the rage.

“The decision before my office is not to decide if the loss of Breonna Taylor’s life was a tragedy — the answer to that question is unequivocally yes,” he said.

Mr. Cameron, a Republican, acknowledged that not everyone would be satisfied with the charges and said that as a Black man, he understood the pain that was brought about by Ms. Taylor’s death.

“Justice is not often easy and does not fit the mold of public opinion. And it does not conform to shifting standards,” Mr. Cameron said.

The grand jury decision to indict Mr. Hankison came after more than 100 days of protests on the streets of Louisville and after a monthslong investigation into the death of Ms. Taylor, a 26-year-old emergency room technician who was shot in the hallway of her apartment by officers executing a search warrant as part of a drug investigation.

Grand jurors indicted Mr. Hankison, a detective at the time, on three counts of “wanton endangerment,” saying he had imperiled the lives of three of Ms. Taylor’s neighbors by firing bullets that reached their apartment.

Mr. Hankison fired through a door and window of Ms. Taylor’s apartment building that were covered with blinds, violating a department policy that requires officers to have a line of sight. At least some of his rounds reached the apartment directly behind Ms. Taylor’s, where a pregnant woman, her husband and their 5-year-old child were asleep. The rounds shattered the family’s glass door but did not harm anyone.

Mr. Hankison is the only one of the three officers who fired their weapons who was dismissed from the force, with a termination letter stating that he showed “an extreme indifference to the value of human life.”

All summer across America, Ms. Taylor’s name has been chanted and her image held up on posters at rallies protesting police brutality, with celebrities writing open letters and erecting billboards that demanded the officers be criminally charged. City and state officials had feared that a decision not to prosecute the officers involved in Ms. Taylor’s death would inflame a city roiled by demonstrations that have sometimes turned violent.

In anticipation of the grand jury’s decision, the Louisville Metro Police Department canceled vacations and Chief Robert J. Schroeder said officers would not be granted time off. A local judge signed an order shutting the federal courthouse downtown, where storefronts and office towers were boarded up.

Ms. Taylor’s mother, who had sued the city of Louisville for wrongful death in April, received a $12 million settlement last week. But she and her lawyers have insisted that nothing short of murder charges for all three officers would be enough, a demand taken up by thousands of protesters in Kentucky and across the country.

In downtown Louisville on Wednesday afternoon, crowds who had gathered to listen as the indictment was read aloud cried out in fury and grief.

After the announcement, protesters shrieked in disgust. Shouts of “That’s it?” rose from the crowd. One person called for the city to be burned down. Several people broke down in sobs.

Particularly painful, some protesters said, was the news that Mr. Hankison, the lone officer charged, was required to post a bond of just $15,000.

Desaray Yarbrough, who walked out of her Louisville house as people in the crowd marched past it, said the announcement would do nothing to quell angry demonstrators.

“It’s unjustifiable,” Ms. Yarbrough said. “The lack of charges is getting ready to bring the city down.”

Ben Crump, a lawyer for the family, wrote on Twitter that the lack of additional charges was “outrageous and offensive.”

But many kanunî experts had predicted that indictments would be unlikely, given that a state statute in Kentucky allowed citizens to use lethal force in self-defense and that it was Ms. Taylor’s boyfriend who had fired first. John W. Stewart, a former assistant attorney general in Kentucky, said he believed that at least two of the officers who opened fire were protected by that law. 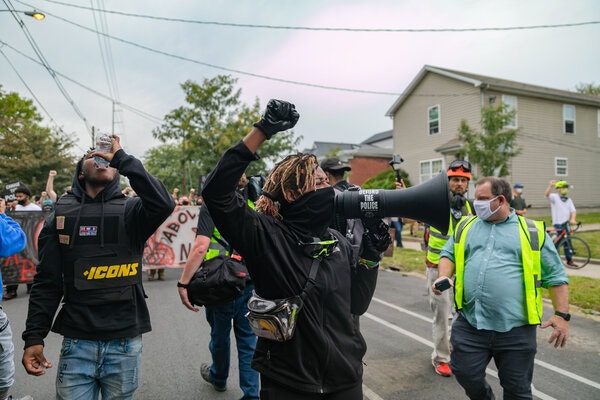 “As an African-American, as someone who has been victim of police misconduct myself, getting pulled over and profiled, I know how people feel,” Mr. Stewart said. “I have been there, but I have also been a prosecutor, and emotions cannot play a part here.”

During the raid, two officers, Sgt. Jonathan Mattingly and Detective Myles Cosgrove, returned fire after Ms. Taylor’s boyfriend, Kenneth Walker, fired one shot that struck Sergeant Mattingly in the leg, Mr. Cameron said. Mr. Walker’s bullet pierced Sergeant Mattingly’s femoral artery, and the other officers scrambled to drag him out of the apartment and apply a tourniquet to his leg.

The officers who broke down Ms. Taylor’s door shortly after midnight on March 13 had come with a search warrant, signed by a local magistrate. They had court approval for a “no-knock” warrant, which Louisville has since banned, but the orders were changed before the raid, requiring them to knock first and announce themselves as the police.

Mr. Walker has said that he and Ms. Taylor did not know who was at her door. Only one neighbor, out of nearly a dozen interviewed by The New York Times, reported hearing the officers shout “police” before entering.

The warrant for Ms. Taylor’s apartment was one of five issued in a case involving her ex-boyfriend Jamarcus Glover, who is accused of running a drug trafficking syndicate. At the other addresses that were searched, officers found a table covered in drugs packaged for sale, including a plastic sachet containing cocaine and fentanyl, police logs and a laboratory report show.

The surveillance leading police officers to Ms. Taylor’s home included a GPS tracker showing repeated trips by Mr. Glover to her home; photographs of him emerging from her apartment with a package in his hands; footage showing her in a car with Mr. Glover arriving at one of the trap houses he operated; and his use of her address on bank records and other documents. The F.B.I. has opened an investigation into whether the inclusion of her name and address on the warrant violated her civil rights, as her family’s lawyers have claimed. 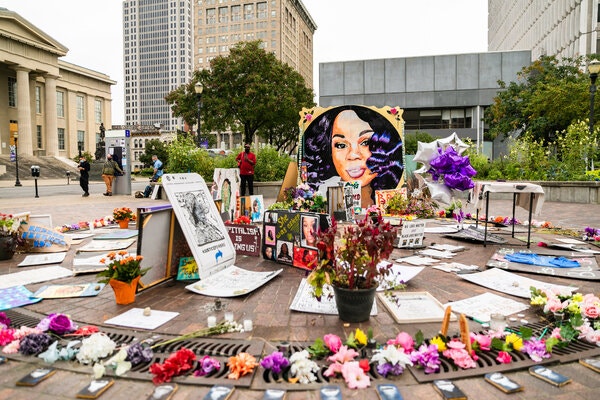 The announcement on Wednesday revealed several new details in the case. Investigators at an F.B.I. laboratory reviewed the ballistics evidence and concluded that the shot that killed Ms. Taylor was fired by Detective Cosgrove. A total of 32 shots were fired by the police: 16 by Detective Cosgrove, 10 by Mr. Hankison and six by Sergeant Mattingly. The attorney general said none of Mr. Hankison’s rounds struck Ms. Taylor.

Mr. Cameron, who ran on a law-and-order platform, said the investigation and the grand jury determined that the police had properly knocked and announced their presence before bursting into Ms. Taylor’s apartment — a point disputed by Mr. Walker and by a number of neighbors who have said in interviews with reporters that they heard no announcement.

For months, Ms. Taylor’s death has been a rallying cry. Michelle Obama and Kamala Harris, the Democratic vice-presidential nominee, called out her name during the Democratic National Convention. Oprah Winfrey paid for billboards demanding the officers be charged, writing in her magazine, “We have to use whatever megaphone we can.”

‘No new answers’ says WHO as it reports record 350,000 daily coronavirus cases