MILL CITY, Ore. — The fire that galloped down the canyon along the North Santiam River last week charred tall firs to matchsticks and coated the survivors’ needles in dull, sepia-gray ash.

The blaze claimed some of the Douglas firs that Fred Girod and his father planted in 1968, along with the old family house that overlooked the river. It claimed the maples and oak where bald eagles and osprey would settle, visible from Mr. Girod’s bedroom window.

“I can rebuild the home,” Mr. Girod, a Republican state senator who represents this area, said this past week, as smoke rose from a hole where his back door had been. “I can’t rebuild the setting.”

The human toll of Oregon’s worst wildfires in a century has been substantial. Thousands of Oregonians have lost their homes or businesses. Several perished or went missing in the firestorms. But in economic terms, the greatest damage to the state from the fires does not come from lost structures.

It comes from the trees.

Oregon’s economy remains deeply rooted in its forests. Though in recent decades the state’s reliance on natural resource extraction has shifted to jobs in human services and high technology, the woods are a cornerstone of Oregon’s lifestyle appeal to high-skilled workers from California and points east. And the timber industry, while diminished, still powers rural economies, along with travel and tourism to lakes, campgrounds and hiking trails through the majestic old-growth canopies. 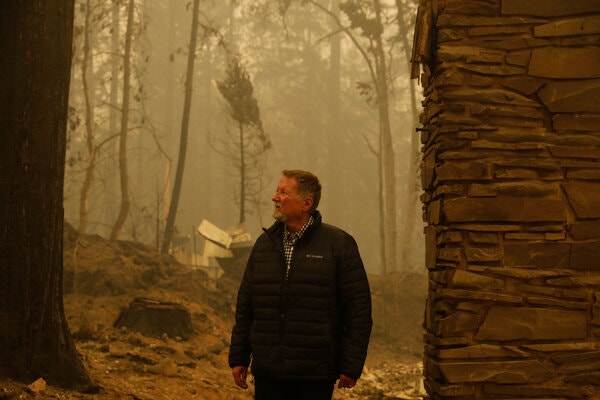 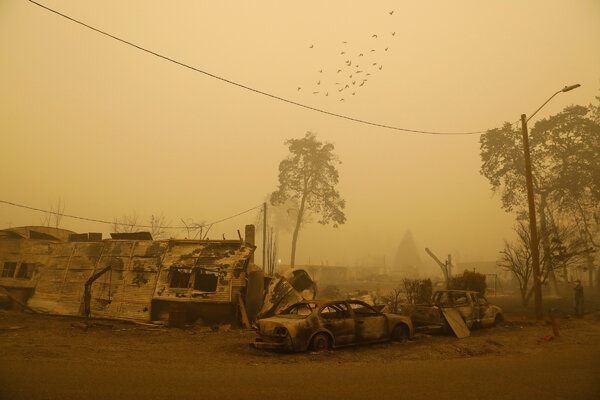 Schoolchildren plant trees in annual rituals. Hikers and campers flock to their shade in the summer, particularly this year, in the thick of a pandemic that has locked so many people in their homes.

When the evergreens ignite, Oregon mourns.

“Downwind from where the forest burns we inhale the cindered souls of trees,” the state’s former poet laureate, Kim Stafford, wrote in a recent poem he posted to Instagram, “that in a whoosh became particulate and rode the wind to enter us.”

Half of Oregon’s land is blanketed by forest. The trees run thinner in the drier half of the state, east of the Cascade Mountains, which are dominated by tall Ponderosa pines and Seussian junipers. On the western side, the stands grow high and lush: the stubby, flat needles of hemlock on the coast; the Christmas tree bell flare of firs rising above the vineyards of the Willamette Valley; and everywhere, the great green canopy of the state tree, the Douglas fir, which wears deep grooves in its bark and stacks high in the trucks that hustle logs to the mills over narrow mountain passes.

Now, nearly 800,000 acres of forest — more than 1,200 square miles, an area larger than Rhode Island — is within the perimeters of the still-raging fires.

Economists, foresters and local officials in Mill City and other areas struck by the fires say the loss of the state’s signature flora in the flames has already scorched the economy, and the effects will linger long after the smoke and ash are washed away by fall rains. 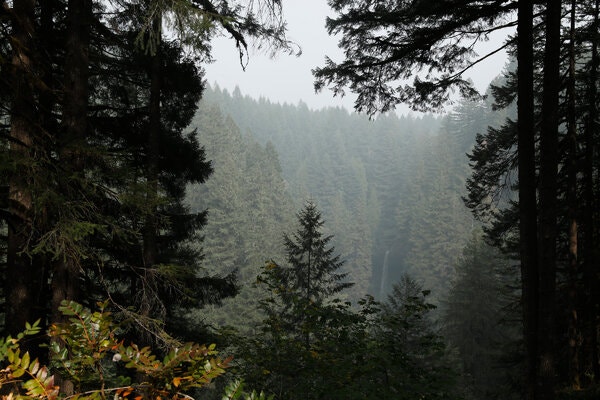 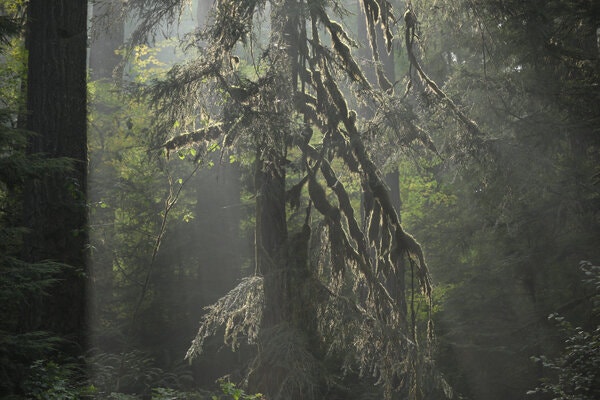 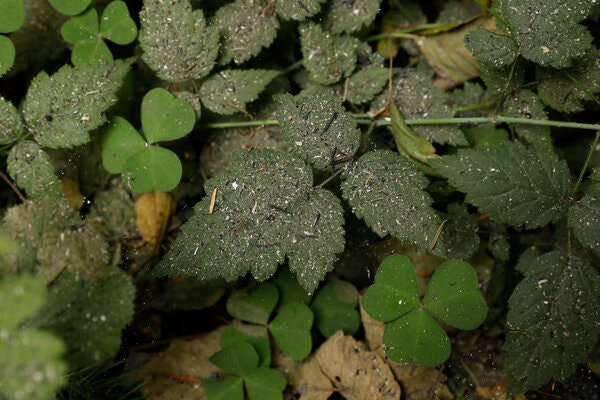 Josh Lehner, an economist for the Oregon Office of Economic Analysis, estimates that timber and forest-based recreation generate $6 billion annually in the state, or about 3 percent of Oregon’s total economy. Those industries are particularly large employers in the state’s hard-hit rural areas, which took nearly twice as long as Oregon’s cities — almost an entire decade — to regain the jobs they lost in the recession that began in 2008.

Mark Rasmussen, a forest economist for Mason, Bruce & Girard, a timber consultancy in Portland, said just under half the area burned by the fires is private land. Timber companies may have already lost an amount of timber equal to one or two years of harvests, he said. “These areas are all pretty big trees,” he said. “There will be a lot of damage.”

The loss could prove doubly devastating to the towns like Mill City and its sister communities up and down the canyon that leads across the Cascades from the Willamette Valley to the recreational haven of Bend, in Central Oregon. State officials expect to clear hundreds of thousands of dead trees in the coming weeks and months from Highway 22, which runs from the capital city of Salem through Mill City and into Bend, disrupting travel.

Even the state’s urban engines of growth, like the tech companies in the Portland area, have seen their activity hampered by the fires. Smoke from the torched trees has choked the entire state in a blanketing fog, forcing day deva centers and other businesses to close temporarily over concerns about indoor air quality. Outdoor dining tables in downtown Portland, which had teemed with people over the summer, sat mostly empty on a recent weekday as happy hour approached.

For the Oregonians who make their living more directly from the woods, smoke and fire have combined to jolt their businesses. Seneca, a family-owned timber company that owns private land for logging and a sawmill that employs more than 350 people outside of Eugene, shut down for five days this month over air quality concerns from the fires. 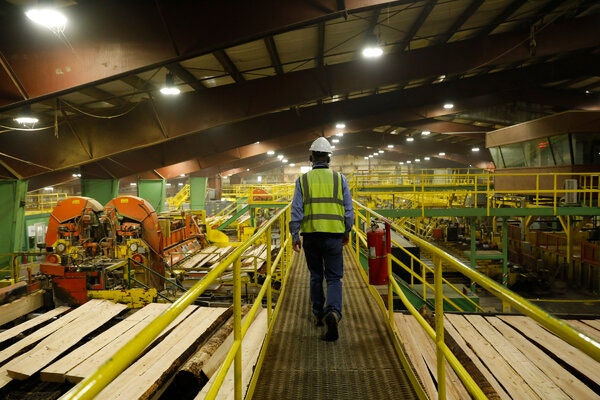 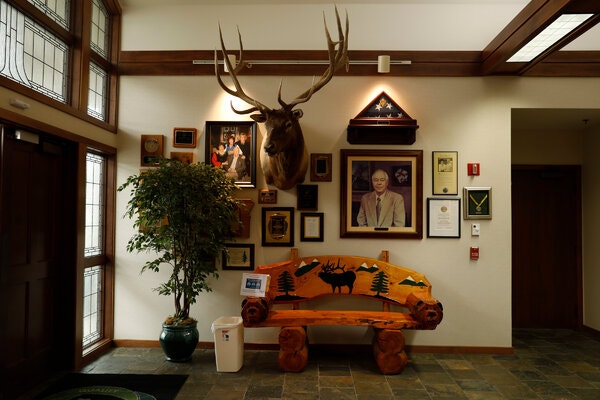 It was a particularly bad time to stop work: Seneca had been adding shifts in its mill to keep up with the demand for lumber at America’s large home improvement stores, a direct result of the boom in remodeling projects fueled by white-collar professionals across the country who have been stuck at home amid the pandemic.

Seneca allows the public to use its lands for recreation but typically closes them when fire danger gets highest in late summer. This year, as heat and drought raised the danger level in the spring, the company closed its lands earlier than it ever has, in May.

“Fire on the landscape is not unknown to us,” Seneca’s chief executive, Todd Payne, said at its sawmill headquarters. “But fire on this magnitude is.”

Mr. Payne estimated that fire has encircled or engulfed 5,000 to 10,000 acres of the company’s forests this year. Other industry officials say the companies that log timber stands on contract have likely seen millions of dollars of equipment ruined by fire.

Some of Seneca’s employees, including Mr. Payne, joined the front-lines fight to contain fires on the company’s lands, a longtime practice for industry employees that is becoming more frequent as large fires proliferate in the state. In Mill City, a group of volunteers — who the mayor, Tim Kirsch, called “potbellied loggers” — joined local firefighters to cut fire breaks in a field next to a city park in a last stand against the flames. They saved most of the town from burning.

Mr. Payne, Mr. Kirsch and other elected leaders across Oregon’s timber communities blame this year’s fires on decades of diminished logging activity on the state’s federal lands. Slowed by a federal policy change under President Bill Clinton in the 1990s and by subsequent litigation from environmental groups, federal harvest levels in Oregon have plunged. The forests have grown thicker with brush and dead trees that can catch fire easily.

“This is a logging community,” and people in timber communities want the government to let them log more, for economic and safety reasons, said Stacie Cook, the city recorder in Mill City. “If you don’t take the fuel off the floor, this is what happens.” 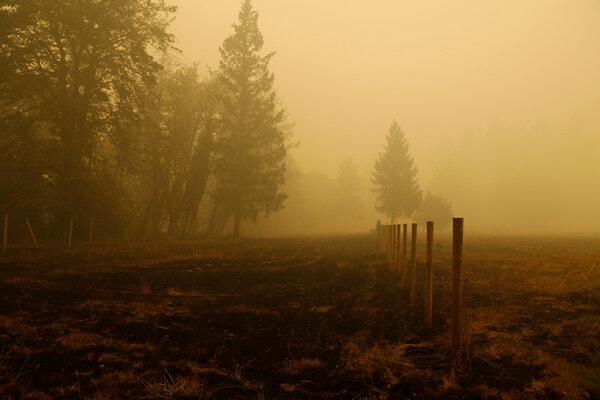 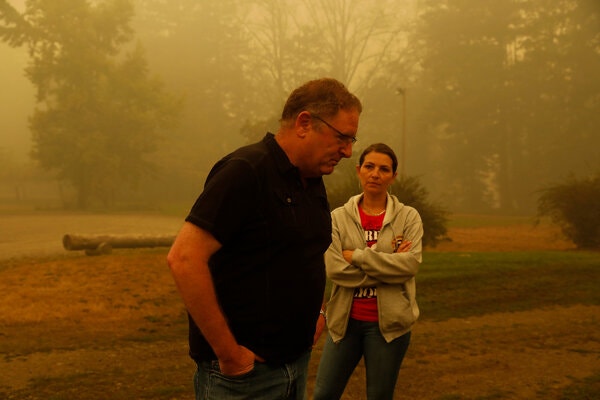 Many ecologists dispute that. Western Oregon’s forests historically suffered large burn events evvel every few hundred years, even before the time of widespread logging. “I don’t think that’s relevant at all to this fire,” said Jessica Halofsky, a research ecologist at the U.S. Forest Service, who directs the Northwest Climate Hub and the Western Wildland Environmental Threat Assessment Center. “The fire occurred under such extreme burning conditions that almost any level of forest would have burned.”

Climate change, driven by the burning of fossil fuels around the globe, is also fueling the rising risks for large fire events in Oregon and across the West, scientists say, which means the likelihood of future losses to the timber industry. Ms. Halofsky is part of a team of researchers attempting to find changes in forest management, like what to replant and when, that might help improve the health of forests to shield them against rising fire risks.

Oregon’s governor, Kate Brown, has criticized Republicans like Mr. Girod who staged a walkout to block a state climate bill. Mr. Girod, the state senator from Mill City, bristled at the criticism as he rode in a car with Roger Nyquist, a Republican county commissioner in the region, after looking through what remained of his house and the truck he lost to the fire.

Carbon emissions “could have a drying effect” that could raise future risks of fires, Mr. Girod said, but he rejected the idea that such emissions were responsible for the deadly conflagrations now enveloping the West Coast. “To blame them for what’s happening here is just wrong.”

Mr. Nyquist said that the combination of burned homes and trees would hurt the economy in Linn County, where he is a commissioner, but that the precise impacts were hard to predict. “We have a housing shortage, timber’s at a record price, and a bunch of people just lost their homes and land,” he said. “So it’s hard to make sense of.”

Lesser fires in 2017 cost the state’s tourism industry an estimated $51 million. Experts are bracing for much more from these fires, which could close some trails and campgrounds for years. “People are literally taking their R.V.s and dollars and leaving the state because it’s not fun right now,” said Lee Davis, who runs the Outdoor Recreation Economy Initiative at Oregon State University.s

On the way down from Mill City, Mr. Nyquist drove past the Fisherman’s Bend Campground, a once-shaded campground on the North Santiam. Its trees were burned black and bare by the fires. Ash coated the road.

Mr. Nyquist and his passengers turned to stare. The car fell, for a moment, as silent as the forest floor.

The female travel community exchanging postcards to explore the world