There are at least five reasons Joe Biden’s consistent lead over Donald Trump does not guarantee him a lock on the White House.

First, there are indications that Trump’s base of support — whites without college degrees — is more energized and committed to voting this year than key Democratic constituencies. And there is also evidence that polling does not reflect this.

Second, Latinos, who are key to the outcome in several crucial states — Arizona and Florida, for example — have shown less support for Biden than for past Democratic nominees. Many Hispanic voters seem resistant to any campaign that defines them broadly as “people of color.”

Third, absentee voting is expected to be higher among Democrats than Republicans, subjecting their ballots to a greater risk of rejection, a fate more common to mailed-in votes than to in-person voting.

Fourth, the generic Democratic-Republican vote (“Would you be more willing to vote for a Republican or Democratic candidate for Congress?”) through early July favored Democrats by more than 10 points, but has since narrowed to 6 points.

Fifth, the debates will test Biden’s ability to withstand three 90-minute battles against an opponent known for brutal personal attacks.

There are other factors — such as the possibility that the Republican Party will conduct an effective voter suppression drive, or that Trump and his advisers will contrive new mechanisms to pave the way to victory.

The same pattern in national polling has held true in the nation’s suburbs which, by many accounts, are the real 2020 combat zone.

Robert Griffin, the research director at the nonpartisan Democracy Study Voter Study Group, provided veri to The Times on trends in suburbia that show a very modestly fluctuating line from last January into this month. Biden’s advantage over Trump ranged from 9.7 to 12.0 percentage points.

“I’m not seeing any substantial changes since January,” Griffin noted by email.

Why, then, should there be any doubt about the outcome on Nov. 3?

Let’s take a look at the answers in the order listed above.

A Democratic strategist — who requested anonymity because his employer does not want him publicly identified talking about the election — analyzed the implications of the most recent voter registration trends for me.

In Michigan, Pennsylvania and Wisconsin, he said, overall

In addition, he continued, registration among whites without college degrees

The pattern was more pronounced in Pennsylvania and Wisconsin than it was in Michigan.

On its own, increased registration among non-college whites would have only a negligible effect on total state voting, my source pointed out, but

Even if white non-college turnout reached the highest expectations, he cautioned, it would not “erase Biden’s current polling leads. But it does make the races much closer.”

While Democrats have struggled for years with non-college whites, another set of problems for Biden and the party has begun to emerge this year in what many liberals had been counting on as a key constituency: the steadily growing Hispanic electorate.

As Ian Haney López, a law professor at the University of California, Berkeley, and Tory Gavito, a human rights lawyer who is president of Way to Win and the founder of the Texas Future Project, wrote on these pages on Sept. 18:

Why? López and Gavito offer an explanation based on 15 focus groups and a national survey:

In fact, the authors continued, the majority of Hispanics

Another veri point they found “even more sobering”: López and Gavito asked

As they expected, “almost three out of five white respondents judged that message convincing.”

More disconcerting to López and Gavito, both liberals, was that “exactly the same percentage of African-Americans agreed, as did an even higher percentage of Latinos.”

Latinos are a major segment of the population in a number of key battleground states: Texas, 38.7 percent; Nevada, 29.2 percent and Arizona, 31.7 percent; and they are significant players in North Carolina, 9.8 percent, and Georgia, 9.9 percent. These are all states where their ballots could prove crucial to the outcome.

Compared with past elections, a disproportionate share of the ballots cast this coming November will be sent in by mail, a procedure that in most cases involves detailed requirements that can lead to disqualification for errors, large and small.

During this year’s primary elections, both The Washington Post and National Public Radio reported that more than 500,000 absentee ballots were disqualified, many for failure to meet stringent matching signature requirements, far more than in previous years.

Disqualified ballots are a bigger sorun for Biden and the Democratic Party than for Trump and the Republican Party. An August WSJ/NBC poll found, for example, that 11 percent of Trump voters plan to cast ballots by mail compared with 47 percent of Biden voters.

From another vantage point, those planning to cast absentee ballots favor Biden over Trump 74-20, while those planning to vote in person on Election Day favor Trump over Biden 62-30, according to the WSJ/NBC survey.

A recent Philadelphia Inquirer story, “How ‘naked ballots’ in Pennsylvania could cost Joe Biden the election,” illustrates how even a relatively easy mistake can nullify a vote. The paper reported on a state Supreme Court decision that

What would this mean if the 6.4 percent applied to all the votes cast in 2020? Assuming that 37 percent of 2020 voters cast ballots by mail, as the Democracy Fund + UCLA Nationscape project expects, and assuming that turnout reaches or exceeds a projected 155 million, the 6.4 percent rejection rate for absentee ballots would mean that as many as 3.6 million votes nationwide would be rejected. 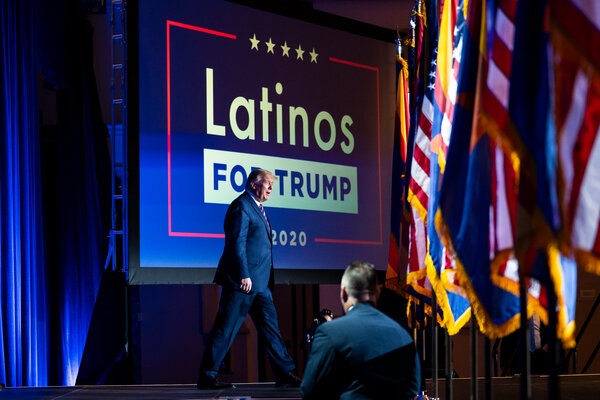 Taking it one step further. If, as the WSJ/NBC survey found, those voters favored Biden over Trump 74-20, that would mean roughly 2.7 million Biden votes would go uncounted, compared with roughly 735,000 Trump votes.

Despite these warning signs, Biden is better positioned than Trump with six weeks to go. Not only has the former vice president had the lead consistently, but many voters appear to be hardened in their commitments and unlikely to shift.

One of the hurdles facing Trump is the racially divisive rhetoric he has lavished on voters over nearly four years in the White House.

His use of racist and anti-immigrant themes proved effective in 2016, but, surprisingly, many voters viewed him then as relatively moderate. That perception of Trump as a moderate made his hard-edged message more palatable to centrist voters.

Harry Enten wrote on FiveThirtyEight about the 2016 election, when Trump was running for president, that “more voters viewed Trump as liberal than any incoming GOP president since at least Ronald Reagan,” persuaded in part by his backing of LGBT rights, his support for infrastructure spending and his promise to preserve Social Security and Medicare.

Since then, Trump’s moderate patina has been wiped off.

By July 2019, the Quinnipiac University National Poll found that just over half the electorate, 51 percent, described Trump as a “racist,” compared with 45 percent who said he was not.

This shift has clearly made it more difficult to reach center-moderate voters, especially the suburban voters he is currently focusing his attention on, as he promises to “protect” their communities from Democrats he claims are determined to build affordable housing for minorities wherever possible, or hellbent on inviting MS-13 gang members to move in next door.

Ryan Enos, a political scientist at Harvard who has studied white racial attitudes, emailed me to say that

As a rule, Enos continued,

For the very small number of voters who remain undecided, “these issues will take a distant back seat to the issue of coronavirus,” in Enos’s view.

William Frey, a demographer and senior fellow at Brookings, was more declarative: “Clearly Trump’s messaging about the suburbs, made of ‘white’ suburban housewives, is several decades out of date.”

In other words, Frey wrote,

Joel Kotkin, presidential fellow in Urban Futures at Chapman University and executive director of the Houston-based Urban Islahat Institute, argues that in other circumstances, the Trump themes might be effective. Referring to densification — a strategy to create affordable housing — Kotkin argues that people of all races and ethnicities generally “do not like density” and oppose

A strategy designed to capitalize on these views, Kotkin continued, “would work better if the president was not Trump.” To many people, “he is an offensive character with a déclassé base.”

Even though “Trump is better organized” than he was last time “and the riots and the strident B.L.M. rhetoric rubs even many old liberals the wrong way,” Kotkin concluded, “my sense is that the Dems hold their suburban edge, but perhaps not by as much as 2018.”

Trump is still the underdog, but attentive observers like Michael Moore, C.N.N.’s Richard Galant, Susan Milligan of U.S. News, The Los Angeles Times’s Doyle McManus, and The Washington Post’s Philip Bump are willing to entertain the possibility that Trump could win.

In June 2013, when Donald Trump was at best a political afterthought, Sean Trende, the senior elections analyst for RealClearPolitics, wrote a prescient essay, “The Case of the Missing White Voters, Revisited,” that in many ways anticipated the 2016 election.

While the 2013 consensus view, in the wake of Barack Obama’s decisive defeat of Mitt Romney in 2012, was that the Republican Party had to move left and win over minorities, Trende argued that the key factor in the 2012 defeat was a failure to turn out white voters.

“From mid-2008 to mid-2012, the census estimates that the number of whites of voting age increased by 3 million,” which should have translated into 99.1 million votes, when in fact there were only 93.0 million, Trende wrote, noting that “when you account for expected growth, we’d find 6.5 million fewer whites than a population projection would anticipate.” On the assumption that Black turnout would decline without Obama at the top of the ticket, Trende concluded:

This Sept. 17, Trende revisited his argument in “Trump’s Path to Victory,” in which he asked “What’s the best case to be made now for how Trump is re-elected?”

His answer is threefold. First, Trump’s job approval rating has to rise to at least 46 percent. It is currently 45.0 percent:

Second, the economy has to improve. Trump currently has a 50.5 percent approval rating on the economy. Third, “the spate of recent stories suggesting that Biden is having difficulty generating Latino and, to a lesser extent, Black support” has to prove true on Election Day.

On Sept. 18, Politico reported that a Monmouth University Poll showed

In the end, Trende wrote.

Finally, there are many Americans who do not believe that Donald Trump, or the çağdaş Republican Party, will allow a fair election. The opportunities for disruption, in a year of rampant coronavirus, are legion. The Atlantic, Slate and USA TODAY have all published plausible articles under variations on the headline, “How Donald Trump Could Steal The Election.” Many other individuals and media outlets are speculating on that possibility. If Trump is losing ground, as poll watchers increasingly suspect, it will be difficult for him to resort to anything other than his habitual fallback: cheating.