When schools shuttered in March, David Miyashiro, the superintendent of the Cajon Valley Union School District, immediately started connecting with families and teachers. During hundreds of calls, Zoom meetings and socially distanced in-person gatherings, he heard desperate pleas from poor parents torn between work and home instruction, or who needed support for high-needs students.

Mr. Miyashiro vowed to reopen schools in the fall, and over the coming months, he took steps to pave the way. The district near San Diego offered free emergency child deva for essential workers in April. It ran an in-person summer enrichment program for more than a third of its 17,000 mostly low-income students, road-testing safety measures. One cohort of students had to quarantine for 14 days after a parent informed the school she had tested positive for the coronavirus, but no student or teacher cases materialized.

Now, at a time when many low-income districts are staying remote, Cajon Valley hasopened its 27 schools for a mixture of in-person and remote instruction. It was, in the minds of Mr. Miyashiro and many educational experts, a small victory for poorer students who, studies show, have been disproportionately hurt by remote instruction.

“There’s a substantial gap to begin with, and it’s expanding under Covid,” said James Soland, a professor of education at the University of Virginia and one author of a study that looked at learning loss during the pandemic.

It is hard to know how well Cajon Valley will weather the semester. In its first week and a half with in-person learning, it had no infections and did not have to close or quarantine any schools or classes. But at a moment where many communities feel abandoned by their schools, Cajon Valley’s ability to partially reopen its buildings with the support of both families and teachers is a testament to the importance of an easily overlooked commodity during the pandemic: trust.

“Knowing you have teachers and principals and a superintendent that deva helped families in this pandemic,” said Jemima Dutra, a parent at Avocado Elementary School, crying as she recounted all the ways the district tried to support her children.“They cared about us even though we weren’t in front of them, and that meant a lot to me.”

In Cajon Valley, just east of San Diego, one-third of the district’s 17,000 students are Hispanic, and two-thirds of its majority white population are Middle Eastern and refugees. (Mr. Miyashiro’s YouTube messages to families are often translated into Farsi, Arabic and Spanish.) Two out of three of its students are poor enough to receive free and reduced-price lunches.

Parents and teachers said the district did a good job of responding to the pandemic when it first hit American shores. In March, the district created playlists with curriculum and content for every grade. Principals frequently made goofy videos to send to students to try and show there could be lightness in a very heavy moment. (One who loves Star Wars hosted: “May the 4th be with you.”) Teachers at Avocado Elementary sent every student a postcard. Teachers all had Zoom office hours, as well as regular online classes.

But equally important, experts say, is the fact that Cajon Valley had laid the ground work for challenges the pandemic presented well before the coronavirus arrived.

For seven years, the district has provided every child a laptop and access to a curriculum that blends technology into day-to-day teaching. Teachers have received extensive training for high-tech, “blended” classrooms, showcased in YouTube videos as far back as 2014.

Mr. Miyashiro pioneered and franchised a çağdaş “World of Work” curriculum focused on helping children find their passions and building, from kindergarten, ways to show children how those passions can translate to jobs. He launched a TEDxKids@ElCajon conference to showcase children’s talents on a globally broadcast platform, but also to get them to learn presentation skills.

So when schools shut in March, Cajon Valley students had laptops, teachers knew how to use the technology, and prior district surveys indicated 100 percent of families had connectivity, though lockdown revealed many were traveling to get Wi-Fi, which the district quickly addressed.

Teachers were an important part of the equation. The district secured a 6 percent raise over two years for teachers from 2019-2021.

“We’re like a family,” said Christopher Prokop, president of the Cajon Valley Education Association, the district’s teachers’ union. There has been plenty of disagreement, but families pull together in crisis, he said. “We’re good at solving problems.” 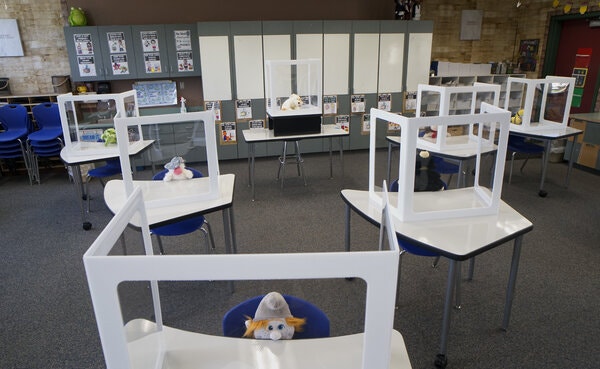 Those strong relationships paid off as the district prepared for the fall semester. At a meeting on Aug. 22, Mr. Miyashiro heard concerns from teachers who taught in the summer program. Middle schoolers had gotten too lax about social distancing, and children in high poverty schools were coming to school with dirty masks. Not all teachers wore masks, though they were required. Teachers wanted to reopen their classrooms, but not at 100 percent capacity, as Mr. Miyashiro had hoped.

After a set of marathon negotiations in late August with the unions, the district announced a plan under which most students could choose between full-time remote instruction or a blended course of study starting with two days a week in person, up to full-time. (Three of the district’s schools have opened for classes five days a week.)

Mr. Miyashiro praised the union for bringing forward safety concerns he had failed to see, and committed to using the rest of his federal stimulus funding to offer wraparound services — nutrition, recreation, distance-learning support — for families who need support during the three days that students are not in school. Thirty percent of children’s families opted for all-remote leaning until December, while the rest have returned two days a week.

These figures present a contrast to what is happening in many parts of the country, where high-poverty schools are significantly more likely to be opening with remote-only instruction.

Mr. Miyashiro said his drive to get back stemmed from the frustration he heard from parents. “The truth is, distance learning isn’t working for most families,” he said. “Parenting, teaching and working do not make for manageable multitasking.”

Learning Heroes, a nonpartisan nonprofit group that regularly surveys parents, has found the most important priorities for reopening were safety and trust. “If parents did not trust the school to serve their children pre-Covid, the bar is much higher now,” wrote Bibb Hubbard, founder of Learning Heroes.

In districts around the country, shifting school opening plans have also fueled parents’ frustration. New York City on Thursday abruptly delayed in-person instruction because of personnel shortages. Many New Jersey districts reversed plans to open in person. And Gov. Ron DeSantis of Florida threatened to withhold funding from the Hillsborough County School District if it did not reopen for in-person learning, leading to a yasal battle.

Cajon Valley was not immune to course changes. Mr. Miyashiro announced in June, far ahead of others, a plan to let parents pick one of four options, including full in-person learning. Most parents said they wanted their children back in classrooms. Then California’s governor ordered that all districts on a Covid-19 watch list could only offer remote instruction. That included Cajon Valley, which reopened for remote instruction on Aug. 19.

The district fought back, receiving a waiver from the state to open all schools with in-person instruction. (The district ended up moving off the watch list anyway.) But during those days, Mr. Miyashiro heard from teachers about their health concerns, and decided his plan should be scaled back to starting most schools at only 50 percent in-person capacity.

Even so, the district remains relatively unusual: more than nine out of 10 of California’s 6.3 million public school students are doing only distance learning.

Mr. Miyashiro said the hybrid plan is the right one, for now. But he continues to worry about the divide between families who have choices and those who do not. He has heard from parents with resources that they are organizing home “learning pods” with other families, or sending their children to specialty camps that offer tutoring.

Meanwhile, low-income families whose children are socially isolated or often home alone have been asking him for child deva. These conversations crystallized for him the devastating impact the pandemic is having on low-income families, many of whom rely on the school for food, before and after-school deva, counseling and learning support.

“This crisis is just making equity so much worse,” he said.

‘Down with Satire!’ How our right to freedom of expression is being eroded ǀ View