MINSK, Belarus — In a show of might, security forces in Belarus on Saturday arrested hundreds of women taking part in a protest march against the re-election of the country’s strongman, President Aleksandr G. Lukashenko.

Following a ruthless crackdown on the protests that followed the presidential election in August, women have emerged as the face of dissent in Belarus, a country of 9.5 million squeezed between Russia and the European Union. Often holding flowers and wearing white shirts, Belarusian women have come to symbolize the peaceful nature of protests and offer a stark contrast to the brutality of Mr. Lukashenko’s robust security apparatus.

“Women can do a lot, they can fight against a dictator,” said Irina K. Palyukovich, an economist, who took part in the so-called Women’s March on Saturday. “Men cannot do that not because they are weak, but they are more vulnerable,” said Ms. Palyukovich, 35. “They are being beaten more often.”

Ms. Palyukovich was one of about 1,000 women who marched from the central market square in the capital, Minsk, through the city.

Initially, the procession was largely unhindered by the police, with only a few officers filming the demonstration and several undercover agents following the march in vans. Then, a group of riot police officers wearing balaclavas briskly squeezed a large portion of protesters into a trap in front of a shopping mall. 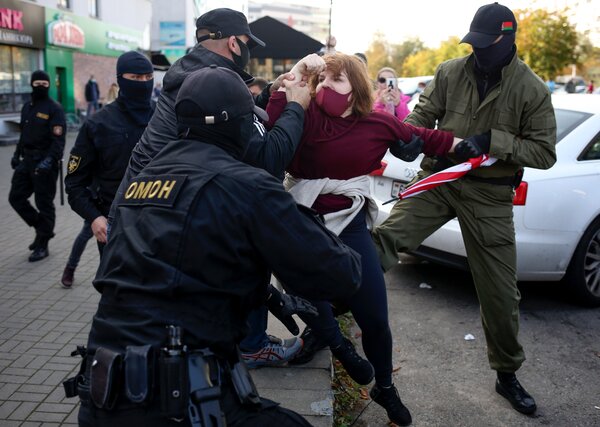 A verbal confrontation ensued with women shouting at police officers and chanting: “Only a coward can beat a woman.” Some of the police officers, who did not identify themselves, responded by saying the protesters had been paid to come out by foreign governments, a common theme put forward by Mr. Lukashenko and state-run news outlets in Belarus.

Many women were visibly terrified as they were confronted, blocked from all sides by heavyset, masked men. At least one woman was taken away in an ambulance after feeling sick and falling on the ground. One by one, police officers carried women to police vans.

More than 300 women were detained overall on Saturday, according to Viasna, a human rights group. By late evening, many were released from police precincts, where officers had taken their photographs and fingerprints.

Svetlana Tikhanovskaya, Mr. Lukashenko’s main rival in the August election, who fled Belarus under duress, condemned the detentions, which she described as “lawlessness.”

In a pre-emptive countermove ahead of Saturday’s march, Mr. Lukashenko’s aides on Friday convened thousands of pro-government women at a concert rally at a hockey stadium in Minsk.

Speaking at the rally, Mr. Lukashenko denied that the recent presidential election was rigged and that the police had used force against protesters. He accused E.U. members, most of all Poland and Lithuania, of fueling protests to create a pretext for military intervention in Belarus.

“They have many tricks in their arsenal and we are on the verge of a terrible catastrophe,” Mr. Lukashenko said, referring to his opponents.