In springtime, when the rain gathers into pools in Iran’s Dasht-e Lut Desert, the sand comes alive.

Tiny, dessicated eggs, buried among the ginger-colored granules, drink in the water and begin to hatch. Some may have been laid in the dunes decades ago. But when rains come, the eggs unfurl into small, feathery crustaceans called fairy shrimp, the freshwater cousins of brine shrimp. For a month or two, the fairy shrimp frolic, swimming upside-down in their ephemeral lakes and laying their eggs before they die or the pool dries up, whichever comes first.

Fairy shrimps live in brief spurts in seasonal ponds throughout the world, from steppes in Mongolia to woodlands in Long Island. But the Lut Desert, often called the hottest spot in the world, may be the last place one would think to find water, even seasonally. In 2005, NASA’s Aqua satellite recorded a ground temperature of 159.3 degrees Fahrenheit. So the presence of shrimp in the Lut, while striking, was not entirely out of character.

“I am not surprised by the presence of Phallocryptus anywhere,” said Miguel Alonso, a biologist at the University of Barcelona who was not involved with the research. “Fairy shrimps can appear in any place.”

The researchers described the new species, Phallocryptus fahimii, this summer in the journal Zoology in the Middle East.

Hossein Rajaei, an entomologist at the Stuttgart State Museum of Natural History in Germany and an author on the study, was the first to spy the shrimp. He had come to the Lut in March 2017, his second visit, on an expedition of 17 people — drivers, medics and researchers — to observe the insects that lived there.

In Farsi, Dasht-e Lut translates to “desert of emptiness.” “I suppose they gave it this name because many people believed there was no life in this desert,” Dr. Rajaei said. Recent expeditions have uncovered an unexpected diversity of spiders, lizards and other fauna, but the life that has been described in seasonal ponds was limited to single-celled archaea.

One day, a little before noon, with the sun high and blazing, the expedition found a lake glimmering in the middle of the desert like an oasis. Dr. Rajaei had never seen a lake so big in the Lut, but the desert had experienced its first heavy rainfall after a decade of drought. The 87 degree Fahrenheit water — the temperature of a warm, creamy soup — felt refreshing in the immense heat, and as Dr. Rajaei waded in the shallow pool he saw milky white creatures swimming around his legs, leaving trails of tiny bubbles. Haydi Fahimi, a herpetologist, and Alexander V. Rudov, another author on the paper, joined Dr. Rajaei in the water and together they scooped up the animals with an insect net. 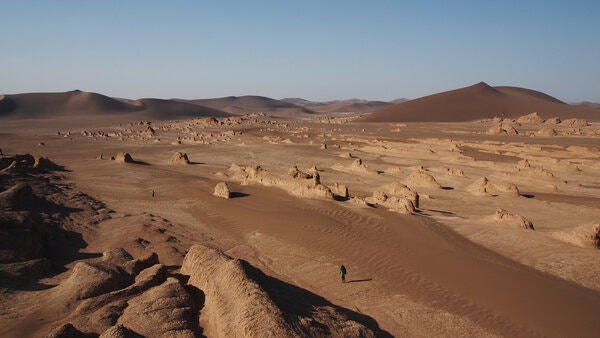 As Dr. Rajaei showed the specimens to members of the expedition, many exclaimed and took photos. “We were all very happy to find this tiny shrimp here,” he said. Some female specimens he collected had iridescent, emerald-color eggs shining through their bellies as they swam upside-down. The researchers only collected the shrimp in one lake, as the others were closer to drying up, more mud than lake, making them dangerous to explore, Dr. Rajaei said. “Not so dangerous that you will die,” he added. “But you will get stuck.”

Unsure if the shrimp was a new species, Dr. Rajaei asked Martin Schwentner, the paper’s lead author and a researcher at the Natural History Museum of Vienna who studies similar crustaceans in Australia, to take a look. When Dr. Schwentner compared the genetics and morphology of the shrimp to the four known species in the genus Phallocryptus, he determined that the shrimp was a new, fifth species. The morphological differences between the new shrimp and a Mongolian fairy shrimp, Phallocryptustserensodnomi, were slight: a longer frontal organ, and curvier antennae.

According to Dr. Alonso, the researchers did not make an unequivocal distinction between the morphology of the new species and that of P. tserensodnomi, which is found in Mongolia, and P. spinosa, which is found elsewhere in Iran. Alireza Sari, a crustacean biologist at the University of Tehran, said he suspected that several of his past discoveries of P. spinosa may have been P. fahimii.

“The morphology is tricky,” Dr. Schwentner said. “But the genetic difference made it obvious that it was a different species.”

Although the shrimps survive just fine in the desert, lasting 10 days in the Lut is a feat for any human. Temperatures range from 122 degrees Fahrenheit during the day to 35 degrees Fahrenheit at night. The team only had enough water to drink and wash their hands evvel or twice a day. Swirling dust storms frequently cocooned them in their cars for hours at a time and even broke several cameras as tiny grains of dust scratched the lenses. “The first five days, the Lut is beautiful and exciting,” Dr. Rajaei said. “Then it is annoying.”

One night, a dust storm concluded, unexpectedly, in fat droplets of rain. “We could not help it, we started dancing,” he said. “I felt like I lost a part of my soul in the desert.”

The researchers named the new fairy shrimp after Dr. Fahimi, the herpetologist on the expedition, who died in a plane crash in Iran a year after the trip to the Lut. As researchers have begun to publish their findings from the expedition, they have also memorialized Dr. Fahimi in the name of a spider, Oecobius fahimii, as well as a snake.

The lake where P. fahimii swam, evvel the size of two swimming pools, has since evaporated, and no one can be müddet when it will fill again. Until then, the eggs in the sand lie in wait.