The family-run Italian fabric house Dedar is beloved by the design cognoscenti not for its unifying aesthetic but for its freewheeling approach to pattern and texture. “Fabrics must arouse emotions, and in our approach, there is room for audacity,” says Caterina Fabrizio, 52, who, with her 50-year-old brother, Raffaele, runs the company that their parents founded in 1976 in Milan. Of course, what elicits that sort of response from them is highly idiosyncratic, informed as much by their travels as the architecture of Northern Italy, where they grew up. The result is a collection that looks like no other and attracts clients such as the Italian director Luca Guadagnino, who featured one of the company’s abstract florals in his 2017 sinema, “Call Me by Your Name”; the Italian interior designer Michele Bönan, who installed their elegant-but-durable upholstery throughout the J.K. Place hotels in Rome, Florence, Paris and Capri; and Hermès, which has collaborated with Dedar on fabrics and wallpapers since 2011.

Dedar — short for design d’arredamento (design for interiors) — was started by Caterina’s father, Nicola Fabrizio, who began his career selling limited-edition lithographs and silk screens by postwar and Pop artists including Robert Rauschenberg and Cy Twombly to the design trade in the 1970s. After that business failed to take off, he and his wife, Elda, founded Dedar, producing hand-woven textiles and sourcing antique tribal rugs from around the world, often taking their two young children on buying trips in India, Thailand and Anatolia. “We spent days in warehouses of rugs,” Caterina recalls. In the early 1990s, the Fabrizios decided to focus on artisanal fabrics after a series of fortuitous trade-show encounters: The first was with Jack Lenor Larsen, the éminence grise of late 20th-century American textiles, who began representing Dedar in the United States after becoming besotted with its offerings. Next came the French designer Jacques Garcia, who in 1995 chose one of Dedar’s damasks, patterned with plants and animals, to use throughout the Hôtel Costes in Paris. What set the firm apart was its dedication to experimentation, working with craftspeople to develop new techniques — synthetics that feel like silk, jacquards that appear woven in reverse — while incorporating rich colors and historical references as varied as Japanese xylography (woodblock printing) and the intricate flower-and-bird patterns found on 17th-century Chinese decorative screens. 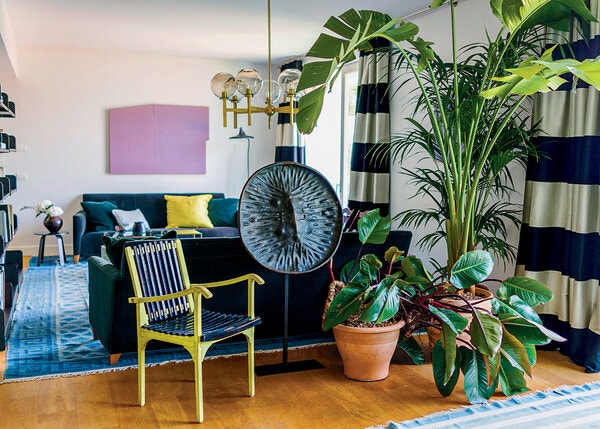 Today, that combination of old motifs and new materials still defines Dedar. Caterina believes their creations, which are made by artisans throughout Italy, as well as France, Belgium and India, reflect a “contemporary way of seeing refinement.” Rendered in novel constructions, the company’s exquisite textiles are meant to be used in everyday environments — one of its most popular fabrics, SN Schwarzwald, may resemble a 17th-century verdure tapestry, with dense woodland scenes in deep greens and blues, but is in fact a printed linen-cotton-canvas blend with a water- and stain-resistant vinyl coating.

Caterina’s own weekend home, a nondescript 1960s-era box a short walk from the shore of Lake Como, enshrines this kind of easygoing luxury. The three-story, 3,550-square-foot open-plan Modernist house feels airy, even though it’s crowded with vintage furniture that she has arranged with no overarching vision in mind. “Look around — there are very few things that are useful,” she says. “I buy things because they touch me, not because I need them.” She points to a rickety wooden chair in the living room that she found a few years ago in a Normandy junk shop: She anticipated its arrival for more than a year, even though it’s not at all comfortable. It’s just one example of what she calls the house’s “randomness,” from a print of Twombly’s “Roman Notes” (1970) — pulled from her childhood bedroom — in the living room to a trio of pendants from the Nilufar Gallery in Milan that project colorful shadows in the downstairs hallway. 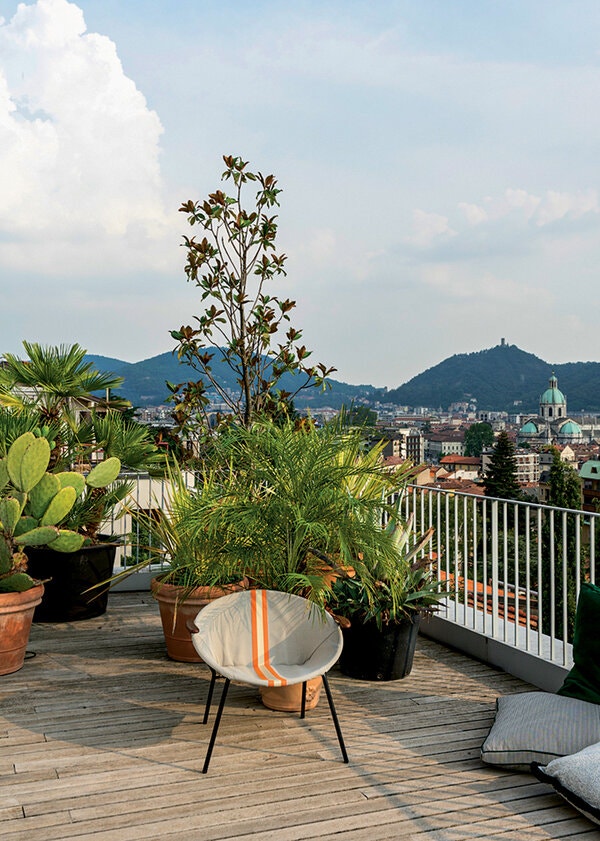 When she found the house in 2001, she enlisted the help of her brother, who worked as an architect before joining Dedar, and the Italian interior designer Vittorio Locatelli to reconfigure the unremarkable, flat-roofed structure. Raffaele took his cues not from the lake’s grand hotels or the sumptuous summer palazzi built by prominent Milanese families in the 17th and 18th centuries but from the region’s Rationalist architecture, particularly the Bauhaus-inspired buildings constructed in the 1930s by architects such as Giuseppe Terragni and Adalberto Libera (both of whose legacies have since been tainted by their Fascist connections). Inspired by the unadorned rectangular structure and large windows of Terragni’s nearby Casa del Fascio, completed in 1936, Raffaele installed sheets of horizontal plate glass across the house’s facade and connected the three floors with a polished slate spiral staircase. He placed all three bedrooms on the ground floor, then opened up the top two floors to create a relaxed environment. “I saw that I could make a bad building from the 1960s into a good building from the 1930s,” he says, gesturing to the white walls and Lavagna stone and oak floors, which provide a neutral canvas for his sister’s magpie sensibility.

But Caterina’s passions are, unsurprisingly, best revealed in the house’s many fabrics. From the horizontal black-and-white stripes on the living and dining room curtains to the textured beige pillows on a nubby cotton jacquard bedspread in the main bedroom, the décor eschews all clichés of a traditional beach house, even though the hillside property overlooks the lake. The most striking example is the third-floor sunroom, which opens onto a terrace scattered with palm trees and prickly pear cacti. Its walls and ceiling are covered in wallpaper in a colorful jungle pattern that Dedar produced for Hermès. In the center of the room is a pair of 1960s wicker chairs fabricated by Bonacina, a company known for its rattan, upholstered in a geometric African-inspired woven silk. A faded red Indian kilim on the floor — which Caterina swaps out for a plusher rug in the winter — underscores the room’s layered, eclectic charm. 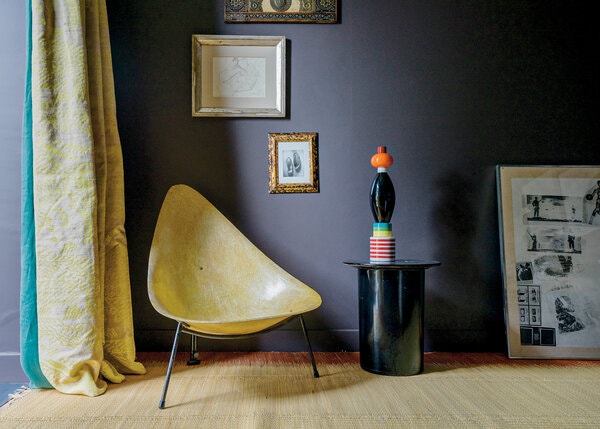 Dedar, of course, wouldn’t exist without Caterina’s father and mother. Nor, she says, would her eye: “My crazy parents wanted to escape Milan and let us grow like wildflowers.” On the outskirts of the village where she spent her childhood, Fino Mornasco, six miles from her current weekend home, the Fabrizios lived in one of the 17th-century outbuildings on the estate of a grand villa, where their neighbors were artists. Both Caterina and Raffaele left the village for university in Milan, but the business, and especially the prospect of raising her two sons in a more laid-back environment, ultimately drew her back to Como in 2001. (Now that her children are adults, Caterina spends most weekdays at her apartment in Milan’s Brera district, an hour to the south.) In the beginning, the decision to return to Como, like the design of her home there, required a real leap of faith — which, to Caterina, feels reminiscent of her fabric business: One is forced to imagine Dedar’s offerings on a chair or made into curtains with the blind hope that, evvel installed, such choices will elevate the space they’re in. “In the end, either you hate it or you love it,” she says. “But when you love it, you really remember it.”

Lukashenko says Belarus will close borders with Poland and Lithuania