With the Atlanta Falcons’ season opener just days away, safety Ricardo Allen, center Alex Mack and defensive end Steven Means had a lot on their plates: new teammates to meet, new game plans to learn and myriad safety protocols designed to prevent the spread of the coronavirus.

On top of all that, they’d scheduled an 8 p.m. Zoom call with the football team from Booker T. Washington High School in Atlanta.

So after working 10 hours at the team’s practice facility last Tuesday, the players raced home to grab dinner with their families, and instead of plopping down on their sofas, logged on for a 30-minute talk with the young athletes.

“What made you guys feel we would be the turning point in this,” a player named Sir Amos asked about the Falcons’ efforts to persuade young people to vote.

“The youth come in numbers,” Allen told the students. “If you listen to the old hands who have been fighting for this forever, one of the best things they said you can do is to pass it down to the youth to get them fighting, too.”

The Falcons’ Zoom call was part of a number of social justice initiatives the team will be involved in this season, their contribution to a wave of renewed activism that other N.F.L. teams are also joining with varying levels of commitment. They let a New York Times reporter in on the call to give a look inside the social justice work the team has committed itself to as part of a season-long journey.

The conversation that day wasn’t just about football. Instead, the players hammered home to the approximately 30 students on the call that voting for lawmakers, judges and other public officials is the best way to change the conditions in their communities. And if the students worked at the polls on Election Day, they could earn a few dollars.

Only a handful will be eligible to cast ballots on Nov. 3, but Election Day workers don’t need to be 18 to work the polls passing out forms or directing voters where to line up. The players said they knew why election engagement among young people is low; it wasn’t so long ago that they were students themselves, with other priorities that seemed more important. But they said with a presidential election looming and their communities in upheaval, now is the time to participate if they want to upend the status quo.

“Growing up, I didn’t deva too much about voting,” Means, 30, told them. In local elections, “you just circled whoever’s name sounded the coolest.”

But Means, who is from a rough part of Buffalo, N.Y., said voting “is really the strongest thing we can do, it’s the most impactful thing we can do that is nonviolent for us to really make change.” 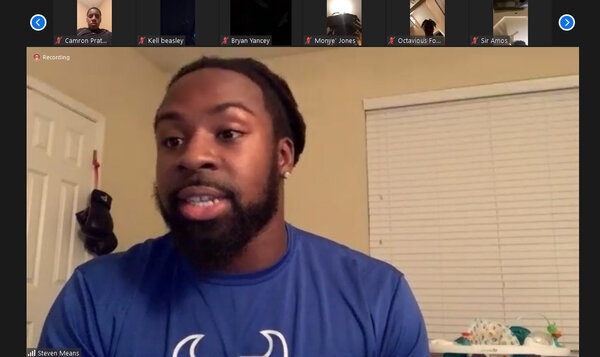 This season, the N.F.L. eased its strict uniform rules to allow players to wear the names of victims of racial violence on the back of their helmets. Means wore the name of a childhood friend, Dennis “Ballie” Browning Jr., who Means said was murdered in prison.

But out of the public eye, many Falcons have gone beyond the league-approved measures, dedicating countless hours to fighting social injustice by working in their communities. The team owner Arthur Blank, who is on the league’s Social Justice Working Group, encourages their participation and has himself donated millions of dollars to organizations that promote voting rights and battle economic inequality, including on the Westside of Atlanta, the city’s poorest neighborhood adjacent to the team’s stadium.

At the Falcons’ home opener on Sunday, some players knelt during the national anthem to protest police brutality and racism, but the Falcons and Seattle Seahawks also knelt after the opening kickoff. The Falcons localized another tribute, making Representative John Lewis, the Georgia Congressman and longtime advocate of voting rights who died in July, the honorary team captain, and draping a jersey with his name over a seat at the 50-yard line.

The civics lesson-turned-pep talk with the Booker T. Washington High students was an extension of the strong commitment to community involvement the team has had since 2017 when it started a social justice committee. In past years, players visited youth detention centers, rode in police patrol cars and other one-off grass roots activities.

But after the police killing of George Floyd in May, and as the issue of racial inequality gained more acceptance for public discussion from the N.F.L.’s power brokers, the number of Falcons players who wanted to participate in the team’s social justice committee tripled in size to 12 players. Ahead of the 2020 season and presidential election, the committee — made up of Black and white players, liberals and conservatives — chose to focus on promoting voter education, registration and participation on Election Day. For Allen and Means, who grew up surrounded by crime and poverty, the work is personal.

“That’s something that everyone on our team was very excited about and it gives everyone a chance to go out and make a difference,” said Allen, who helped start the committee in 2017. “So much of the world is about hierarchy, and when it comes to voting, we’re on the same playing field.” 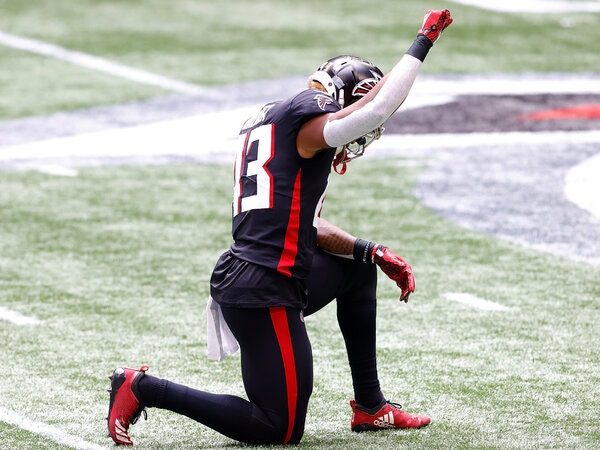 They’re not the only people in the organization who have been in the trenches. Kevin Winston, the team’s vice president of player affairs, has registered players to vote for more than a decade. The team’s community relations department, one of the largest in the league, helps players find activities to match their philanthropic goals.

“We put the players in an environment where they have the best opportunities,” Blank said in an interview last month. “This gives them a bigger sense of purpose coming to work.”

In August, the N.F.L. also threw its weight behind the issue when it unveiled the “Rise Up & Vote” initiative and encouraged teams to use their stadiums or practice fields as polling centers. But the league’s commitment to fighting social injustice continues to be questioned in part because quarterback Colin Kaepernick, who knelt during the playing of the national anthem in 2016 to raise awareness to these issues, is still without a job. This summer, Commissioner Roger Goodell apologized for not listening to the concerns of Black players earlier, and said he supported the players’ right to protest peacefully. 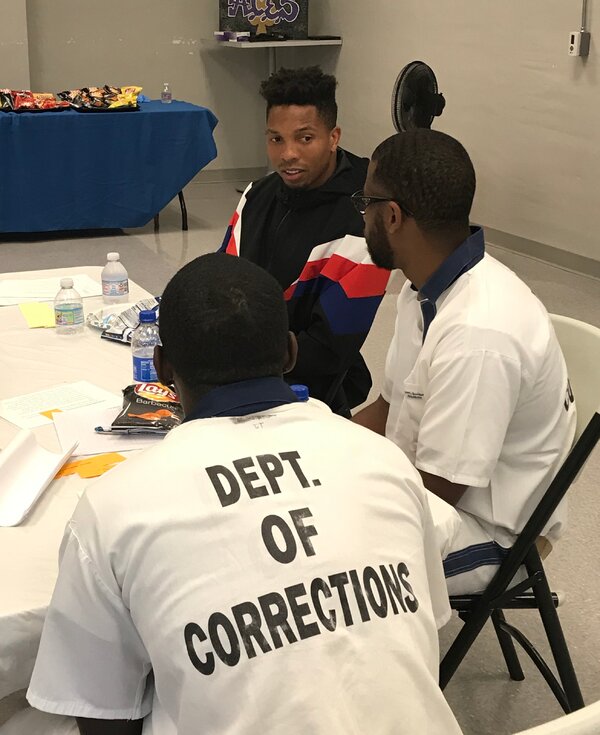 Protests have a unique hold on Atlanta, the birthplace of the Rev. Dr. Martin Luther King, Jr. and a cradle of the Civil Rights movement. In June, Georgia’s primary elections were overwhelmed by a full-scale meltdown of new voting systems installed after widespread claims of voter suppression in 2018.

The state is back in the spotlight as Republican-leaning Georgia emerges as a battleground in the presidential and senatorial races, including one involving Senator Kelly Loeffler, a Republican who co-owns the W.N.B.A.’s Atlanta Dream and has clashed with players after she vocally criticized the league’s embrace of the Black Lives Matter movement.

Floyd’s death reignited protests this spring while the Falcons players were scattered around the country rather than at off-season workouts, which were canceled because of the pandemic. Soon after, they began texting each other to discuss how to respond. At the beginning of June, Coach Dan Quinn invited Mayor Keisha Lance Bottoms of Atlanta and Lloyd Pierce, the coach of the Atlanta Hawks, to speak to the team, and held virtual meetings so players could share their feelings. Allen, Means and other Black players described being racially profiled and their fear when they are stopped by police, stories that shocked some of their white teammates, including quarterback Matt Ryan.

“The one thing that sticks out to me is how many guys have had similar experiences,” Ryan said. This summer, Ryan, who has focused much of his philanthropy on children’s hospitals, has raised more than $1.3 million so far to distribute to groups fighting racial inequality. “I felt like it was time for me to respond to the situation.”

Ryan and the team’s other newcomers to those systemic issues have joined their Black teammates’ efforts, recognizing that the fight against racism should not just be fought by people of color.

The team’s long snapper, Josh Harris, who is white and who joined the social justice committee this summer, said the depth of the teams’ conversations have brought players closer together.

“When you start to have deeper conversations other than ‘hey, what’s up’ and ‘hey, what are you doing,’ and start talking about issues and things that are affecting your life, and affecting the way you were raised, that puts you in a vulnerable position,” Harris said.

In mid-July, two weeks before training camp, the Falcons’ social justice committee met formally to discuss what action to take this season. The group talked about how to get more people, particularly African-American people, to flex their political muscle and affect change on a large scale. The group struck on encouraging people to vote. 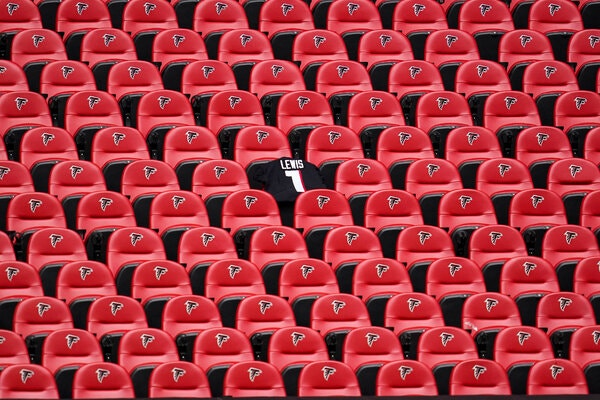 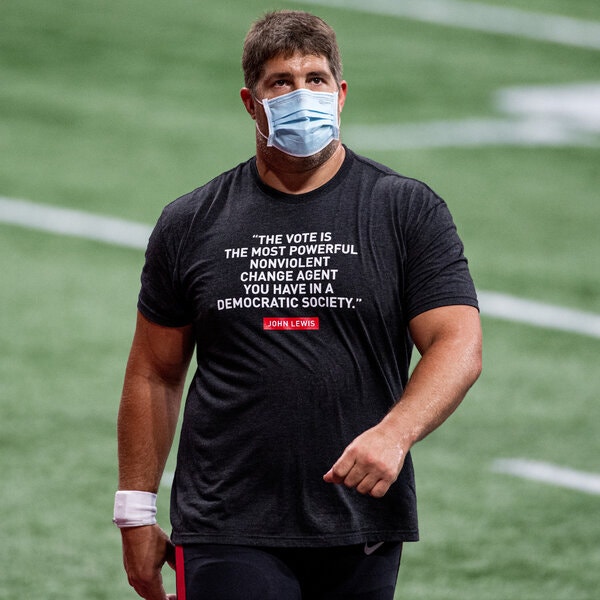 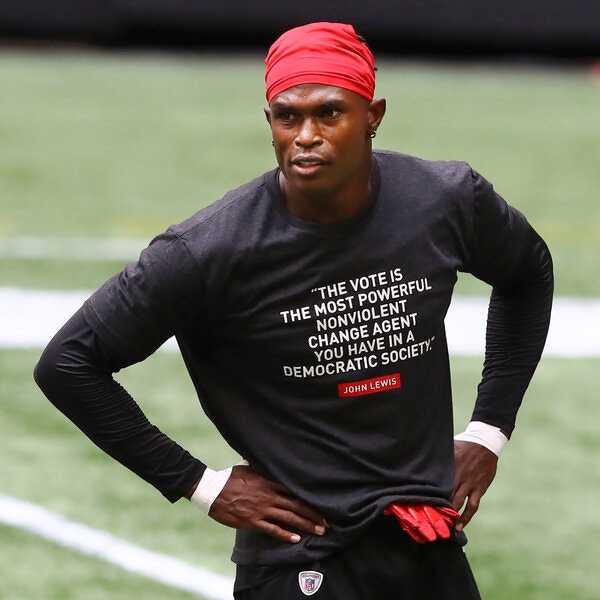 Voting was top of mind because Lewis had died that same week. Allen and Grady Jarrett, another player on the committee, met Lewis in 2018 when they visited Selma, Ala., where he was commemorating his role in the “Bloody Sunday” march in 1965 to promote voting rights.

“The question that kept popping up was, what was the main thing that everyone is talking about and complaining about, and most of the answers come back to having the right people in office to help,” Allen said. “Voting was the most impactful thing we could support.”

After settling their focus, Chris Millman, who runs the team’s community relations department, suggested contacting high school football teams in Georgia. The players learned from Rock the Vote, a nonprofit group that empowers young people, that there was a shortage of poll workers because older volunteers were sitting out the election because of the coronavirus. Getting paid to work at the polls would be an incentive for the students to get involved, the Falcons thought.

On another late-night call in mid-August, Allen, Harris, Mack and Means asked a half dozen football coaches to let them speak to their players. After some hesitation, the coaches threw their support behind the project.

“Since this summer, some of my kids are dying for a chance to get involved,” said Kefla Hare, the football coach at Kennesaw Mountain High School, about 40 minutes northwest from Atlanta. “I’m down 100 percent.”

“We need it in Paulding County,” said Coach Jason Nash, from South Paulding High School in Douglasville, Ga. “It’s bigger than football and if they want to take a day off practice, I’m going to abide by that.”

The Falcons plan to speak to more high school football teams in the coming weeks, while Jacoria Borders, who works for the Arthur M. Blank Family Foundation, will help the Booker T. Washington High School students who volunteered to work the polls get the requisite training.

At the same time, during pregame warm-ups, the players will continue to wear T-shirts emblazoned with one of Lewis’s quotes: “The vote is the most powerful nonviolent change agent you have in a democratic society.”