On an afternoon in late July, Amy Quinn Suplina met two of her longtime employees in an airy street-front room in Park Slope, Brooklyn, to box up her 12-year-old business. Sitting on balance balls to deflate them, the three reminisced while arranging straps, blankets and bolsters for storage.

Since opening Bend & Bloom Yoga in a 1920s firehouse on a residential block in 2008, she had turned it into neighborhood fixture, providing an oasis for yogis of all levels in a striving, strident city.

But the pandemic brought all that to a halt. And after five months paying rent, utilities, and other expenses for a space she couldn’t use, Ms. Suplina decided to forfeit her security deposit and get out.

She isn’t alone.Packed indoor classes focusing on breath, touch and togetherness are not exactly happening these days. In response, yogis have embraced virtual instruction, leaving New York’s physical studios struggling for relevance. Since March, dozens of them have permanently closed, from major corporate chains to independent shops.

Many owners say the pandemic was the final straw for an increasingly untenable business, where even crowded classes could no longer cover astronomical rents. Some studios and teachers are trying to recreate themselves as online brands but face an already saturated market, where celebrity YouTube instructors have millions of followers.

“It’s a really hard time, and communities need yoga and mindfulness practices more than ever,” said Ms. Suplina, who was inspired to open Bend & Bloom after relocating from Washington, D.C., where a studio she attended had given her a sense of belonging. As the lingering pandemic strains New Yorkers mentally and spiritually, physical spaces offering them this kind of sanctuary may become harder to find.

Public assistance programs have been little help to studio owners, most of whom hire teachers as independent contractors rather than employees. This means that studios could not use funds from the federal Paycheck Protection Program to cover their payrolls. Ms. Suplina said she received only a small loan for her administrative staff.

And unlike other businesses that were eventually given dates for reopening, yoga studios and other fitness centers were left out of New York’s plans for months. Last month, when Gov. Andrew M. Cuomo issued 17 pages of guidelines for gyms to incorporate before reopening, Mayor Bill de Blasio excluded group classes. Martin Kerestes, who has run two yoga studios in Queens with his wife since 2003, said there was “no light at the end of the tunnel.”

But many owners say the coronavirus outbreak merely exacerbated a deeper sorun, the imbalance between revenue and rent. A few older studios, like Integral Yoga Institute on West 13th Street, own their own buildings and are less exposed to the rising price of real estate. But most studios rent their spaces and are in competition with ventures that can more easily guarantee, say, $20,000 a month. The pandemic merely pushed Ms. Suplina out of her space a few months early; her landlord intended to sell the building to a condominium developer at the end of the year. 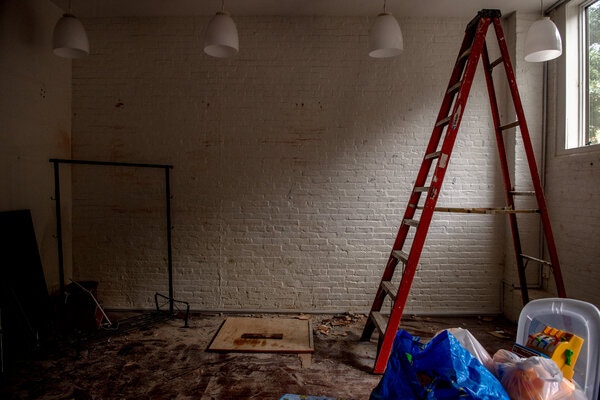 Add that to an overdue reckoning with inappropriate touching and abuse at a few well-known establishments that left some students leery of in-person classes, as well as disruptive platforms like ClassPass, and it’s easy to understand why yoga studios were starting to disappear well before the coronavirus outbreak. But the health requirements necessitated by the pandemic — including physical distancing, especially indoors — have robbed studios of their lifeblood: rooms full of people.

“Our business depended on volume to survive, and now if we say instead of putting 50 people in a room the most we can put is 10 to 12, there’s just no viable way for the model to work,” said Michael Patton, who left a job on Wall Street during the 2008 financial crisis to start Yoga Vida, which had four locations in the city.

Before the coronavirus outbreak, Mr. Patton was paying around $95,000 in monthly rent. He has since broken all his leases and is riding out the pandemic in an empty rural retreat he was developing upstate near New Paltz, for which he is now seeking a partner or a buyer.

“The bigger you are, the bigger the problems,” said Brian Cooper, the chief executive of YogaWorks, a national chain that permanently closed all of its New York City locations in April and is now offering online classes.

The pandemic has been equally tough on smaller studios. Nueva Alma, which Erica Garcia opened on the northern edge of the Bronx in 2012, would have been limited to seven students under physical distancing guidelines. So Ms. Garcia locked the doors for the last time on June 1 and is now teaching Zoom classes. “I’m not in it for the money, but I’m not in it to lose money, either,” she said.

Yoga requires only a clear mind and a few square feet of space, so it is easily converted to remote instruction. But it’s all about community, and seeing the light in others, which can be hard to do through screens.

The disappearance of physical studios means fewer places for “satsang,”a Sanskrit term for sacred gathering spaces, said Sharon Gannon, who co-founded one of the city’s most venerable studios, Jivamukti Yoga, and ran it for 30 years before closing it in 2017. “But yoga practice itself makes one self-reliant,” she continued. “Yogis are good at adapting to change.”

The veri bear this out. According to Mindbody, a booking software company for the wellness industry, its active users quickly embraced online yoga. Last year, one in five users said they had taken streamed or prerecorded classes, but by this June, more than four of five said they were doing so. 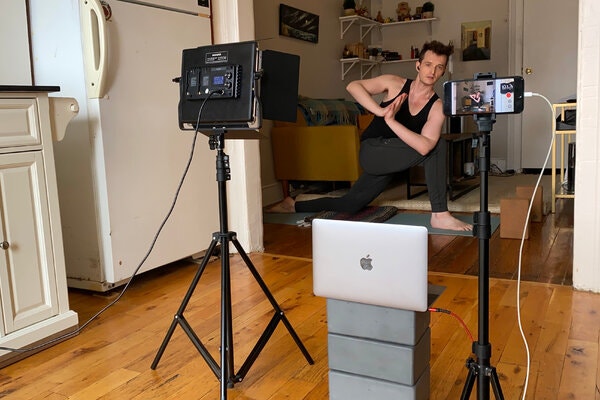 Studios that evvel resisted virtual instruction are now embracing it. For the first time in its nearly 60-year history, the city’s oldest yoga school, Sivananda Yoga Vedanta Center on West 24th Street, is offering online classes. “One way or another, we will make mühlet the teachings of yoga are available to those who want them,” said Neeti Bhatia, the studio’s manager.

Meanwhile, teachers who have lost their studio gigs are breaking out on their own. Before the pandemic, Kevin Bigger crisscrossed the city to teach at nine different studios and for a handful of private clients. Now all but two of his former employers have furloughed him or gone out of business, so he has begun teaching online.

The transition required a hefty investment: Mr. Bigger bought a camera, lights and monitors. It has also been a bit awkward to convert his railroad-style Brooklyn apartment into a sacred space. “In order to teach a live class right now, I have to move half the furniture in my living room and lock the boyfriend in our bedroom and ask him to be quiet the whole time,” he said.

But there are benefits. He is saving time by not commuting and now keeps nearly 80 percent of the revenue, whereas he usually took home less than 30 percent working for studios. Former students who had moved away have returned to the fold. And because he knows his clientele, he can charge them on a sliding scale, he said. “My unemployed students get discount codes, and the investment bankers don’t.”

Sherman Morris, an instructor whose arduous classes at YogaWorks stretched to nearly two hours and attracted a committed following, said teaching online was “the antithesis” of his former practice. But his loyal students have followed him to Zoom. He recalled one, a surgical nurse, who logged in from a tent in the middle of a desert in Afghanistan. “It was priceless,” he said. “How could I not continue with this?” 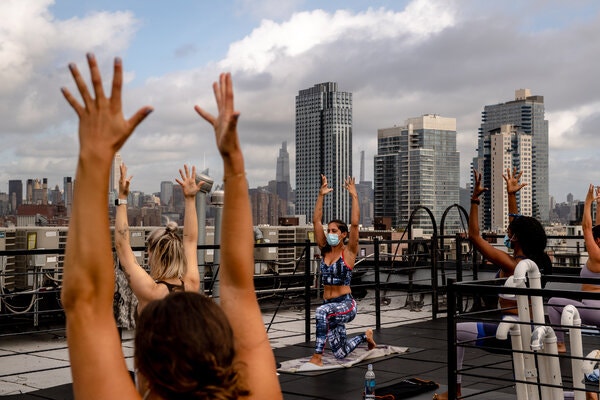 Since many teachers are cutting out the middleman as they organize their own classes and build personal brands, studio affiliations also seem to be losing their cachet.

Adrianna Naomi, who moved to the city from Puerto Rico in 2013, said she was grateful when she found a stable job as a manager of the Flatiron location of CorePower Yoga, a chain. So when Ms. Naomi, 30, was laid off early in the pandemic, she worried about losing her salary and the community she had fostered there. Since then, she and other “instructors have had to take matters into their own hands,” she said.

In late July she began teaching on Zoom six times a week. And on Sunday mornings, Ms. Naomi runs an in-person class on the rooftop of her Williamsburg apartment building, often having to clear beer bottles left by neighbors the night before. She caps the class at 10 students and charges $15. Everyone must undergo a temperature check, sign a health waiver and wear a mask. Overwhelmed by demand, she added a second rooftop class on Monday nights, but she doesn’t know how long she can continue evvel the weather turns colder.

Although Ms. Naomi’s new schedule hasn’t made up for her lost salary, it has kept her afloat. But marketing herself on social media requires constant hustle. Now, instead of competing with other neighborhood instructors for students, she is doing so with yogis around the globe. “You open up Instagram at any time of day and there’s somebody doing a free class,” Ms. Naomi said.

Ms. Naomi has also focused on her social media game since losing her job with a yoga studio.

Some teachers are trying to build their online followings through strength in numbers. Mr. Bigger and three other instructors recently launched Single Point Yoga, a website that bundles their classes together, sort of as a studio would have done in the past.

Ms. Suplina has not given up on the old model. She continues to employ about half of Bend & Bloom’s teaching staff for online and outdoor classes while she figures out her next move. The intimacy and reverence that occur in a studio are essential, she said. “It’s another expression of church,” she explained. “The reason we teach yoga is that alchemy of having bodies together breathing and moving in a room, and seeing people, and connecting and sharing that experience.”

She plans to open a new physical space as soon as she can.

25 years after Srebrenica, genocide denial is pervasive. It can no longer go unchallenged ǀ View