The nearest audience member to me on the August evening I saw the socially distanced “Godspell” revival in Pittsfield, Mass., was a dog lying cozily on a blanket next to its human, who sat in a chair.

My own seat was at least 15 feet from them, outside the tent where the actors were acting and the rest of the spectators spectating. Happy as I was to be seeing a show in person at all, I probably wouldn’t have minded the isolation if I hadn’t had such an obstructed view.

I am a sightline fiend, but I wasn’t just being persnickety. Even after I was allowed to switch at intermission to an empty seat at the back, actors did whole solos I couldn’t see, what with the tent poles and the lighting truss and the low-mounted speakers in the way. Looking around, I realized there seemed to be lots of partial views. Which is not great when tickets aren’t cheap, even if that’s unavoidable with seating capacity severely limited by the state.

I know, I know: It’s horribly poor form to say anything negative about that Berkshire Theater Group production, a much-chronicled Actors’ Equity test case for coronavirus-safe stage practices that has valiantly navigated a shifting labyrinth of public health rules merely to exist.

And I realize that figuring out the geometry of the seat maps — where to put parties of assorted sizes, each far from the stage and one another — must be an enormous headache even without sightlines taken into consideration.

I felt the kind of alarm that seizes critics when they see an arka form they love careening in the wrong direction — meeting necessary safety regulations in a way that hinders design, placing unintended obstacles between the actors and the audience. (Which, actually, a critic might not notice from press seats, which are likely to be among the best in the house. I went as a civilian.)

My worry wasn’t about that single show, anyway. I was worried because outdoor spaces are pretty much what theater has until indoor performance is safe again. Making them work for the audience while following the rules is tricky, and crucial to get right — because even people lockdown-starved for theater will only indulge a show so far.

Not to be alarmist, but it seemed to me like a design emergency. 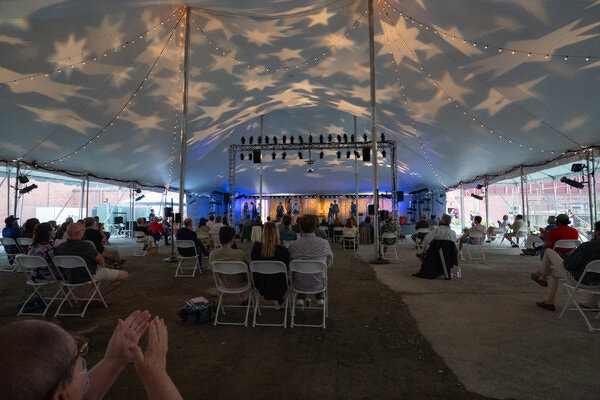 “It absolutely is,” the set designer Rachel Hauck agreed when I got her on the phone from Pittsburgh, where she was putting her minimalist touch on a drive-in concert staging of Jill Sobule and Liza Birkenmeier’s “____ 7th Grade” at City Theater.

I wanted to talk with her and a couple of other accomplished designers to help me think through the challenges that shows all over the country are facing. (None of the designers, by the way, had seen the “Godspell” revival. All were clear that they meant no disparagement of anyone’s work.)

Like every other stage professional who had a full-throttle career before the pandemic brought the industry to a screeching halt, Hauck — who won a Tony Award for “Hadestown” just last year — has been adjusting to the scarcity of now.

“I am of course quietly relieved to hear,” she said, meaning from me, “yeah, the design elements do matter.”

Responding to the space

When the drag artist Jeffery Roberson learned that he would be performing poolside on an isim hoc stage in Provincetown, Mass., this summer, he responded by ordering all new costumes for his solo cabaret show, including an elaborate swimsuit so he could exit by way of the pool.

The set designer Mimi Lien, a Tony winner for the immersive Broadway production of “Natasha, Pierre & the Great Comet of 1812” — a show she had previously designed in a lavishly decorated tent Off Broadway — said it’s vital to assess the forces operating in a given space and proceed accordingly.

“Try not to replicate a olağan theater in some other space,” she said. “Right now what we should all be doing is just responding as best we can to what’s in front of us. So if you’re in a garden, take advantage of the garden.” 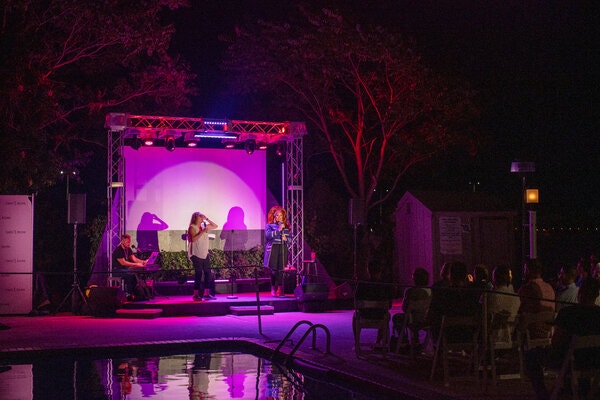 One of the most delightful pieces of design I encountered this summer was, in fact, in a garden: Normandy Sherwood’s “Beast Visit,” by the company the Drunkard’s Wife, in Bushwick, Brooklyn. But it wasn’t only the way it harnessed the environment.

As we entered, each person was asked to choose a bright yellow or hot pink hoop skirt from a rack and put it on, then stand in one of the individual circles around the edges of the space. Designed by Sherwood, the skirts were charming to look at and fun to wear, swaying pleasingly when we moved. They also pulled off the neat feat of visually uniting us while keeping us physically separate.

At Shakespeare Theater of New Jersey, the simple business of painting eight-foot circles on the lawn and placing them six feet apart was a comfortable approximation of a olağan summer experience. And who doesn’t want a little extra space when they’re watching a show from the grass?

I watched another show from a field on Cape Cod: a drive-in circus — yes, I know that’s peculiar — where I was instructed to park my diminutive rented VW Golf behind a hulking SUV with its hatch up. I declined.

And I spent an hour lugging my laptop through Green-Wood Cemetery in Brooklyn to listen to Gelsey Bell’s “Cairns,” a beautiful sound walk with a nagging design flaw. It uses a digital host, Bandcamp, that makes it hard for anyone to download the recording to an iPhone — right at the outset, a roadblock between the arka and a chunk of the prospective audience. 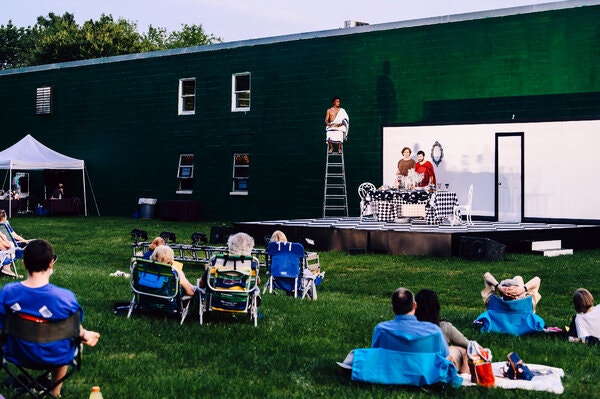 Hope in a semi-limbo time

In theater’s weird, sometimes flailing semi-limbo, creative minds are confronted with such a panoply of restrictions that there is a danger of compromising too much, as the Obie-winning set designer Arnulfo Maldonado told me.

“A lot of plays could be done with actors, minimal props,” he said. “It’s just a matter of at what point does it start doing a disservice to the audience to really strip it away?”

He is right about that — though Hauck, in Pittsburgh, decided her own best options with limited resources were simply to light a steel mill as the backdrop, “shape the space visually and make it functional for the band.”

“It still takes a really savvy design eye to make the most out of what you’ve got here,” she said, “but it’s a huge amount of also, like, ‘And that’s all we can do.’”

There will be, I suspect, a lot of similar judgment calls as theater stumbles its way through this crisis — and I still think there is a danger that the expertise of designers will be minimized.

But you know what else? We’re also going to see productions responding to restrictions in exciting ways. Such as the Billie Holiday Theater’s superbly designed reading of “12 Angry Men … and Women: The Weight of the Wait.” Aesthetically, it made me hopeful.

They filmed it, with five cameras; it’s on YouTube through Election Day. Give it a watch. Maybe it’ll make you hopeful, too.

How Artificial Intelligence at Dubai's 'AI Everything' is combating COVID‐19