EDMONTON, Alberta — The Tampa Bay Lightning eliminated the Islanders on Thursday night with a 2-1 overtime win in Game 6 of the Eastern Conference finals at Rogers Place.

The second-seeded Lightning will play the Dallas Stars for the 2020 Stanley Cup.

Anthony Cirelli scored the game-winner with 6 minutes 42 seconds left in overtime, and Victor Hedman also scored for Tampa Bay. Devon Toews had the lone goal for the sixth-seeded Islanders, about two minutes before Hedman’s in the first period. Andrei Vasilevskiy, who has played every minute of the postseason in goal for the Lightning, made 26 saves. Semyon Varlamov had a much busier night for the Islanders with 46 stops, a personal postseason high.

”Our group believes in one another, and that’s something that happens over the course of time,” Tampa Bay’s Ryan McDonagh said. “We’re really thankful for this opportunity again to be back in these playoffs coming out of the break, and now that we’re here, really focused and determined to finish the job.”

The Islanders were the last team standing from the 16-team qualification round in the N.H.L.’s expanded playoff format. Guided by Barry Trotz, who won the 2018 Stanley Cup and is in his second season with the team, the team reached the conference finals for the first time since 1993.

“We just fell a little bit short,” Trotz said. “I don’t think there’s anything negative except for the result tonight.”

After missing Game 5 with an undisclosed injury, Brayden Point, who entered Thursday tied for the playoff lead in points, returned to the lineup for the Lightning. The Islanders were without the workhorse defenseman Adam Pelech, who was a surprise scratch. Both teams stayed with the somewhat unorthodox lineup formation of 11 forwards and seven defensemen.

Cirelli had gone to the dressing room with 4:43 left in the second period after an awkward collision with the Islanders’ Anders Lee at the blue line. He returned to action in the third period and went on to score the game winner.

He chipped the puck into the right corner and then went to the front of the net. He accepted a pass from Barclay Goodrow from behind the net and beat Varlamov, sending the Lightning to their second Stanley Cup finals appearance in the past six years. Tampa Bay lost in six games to the Chicago Blackhawks in 2015.

“I mean, basically on one leg,” Lightning Coach Jon Cooper said of Cirelli’s winning goal. “I mean, I know, trying to not disclose injuries. But it was pretty clear what happened on that, and for him to come back was pretty remarkable.”

Game 6 was an eerie echo of Game 5, in which the Lightning were awarded a four-minute power play with 1:23 left in the third period. They did not convert and ultimately lost the game on Eberle’s double-overtime winner. 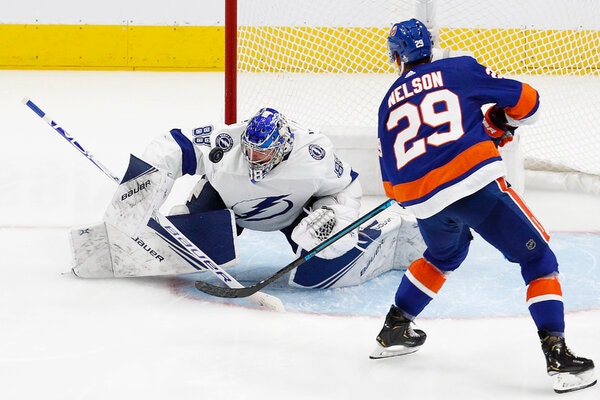 On Thursday, with 1:15 left in regulation, Ondrej Palat just failed to squeeze the loose puck between the goal post and Varlamov’s right pad. Then, with 23 seconds left on the clock, the Islanders’ Andy Greene was whistled for a double minor penalty after his stick got up into the face of Nikita Kucherov.

After three periods, the shot totals were 42-21 in favor of the Lightning, who had a one-man advantage for the first 3:37 of overtime. The Islanders’ best scoring chance came while they were short-handed, when Brock Nelson stole the puck deep in the Lightning zone and skated in for a point-blank shot, which Vasilevskiy stopped.

“With that penalty, we knew we were going to kill it,” Lee said.

With 11:11 left in overtime, the Islanders got their second power play of the night when the Lightning were whistled for having too many players on the ice. But they weren’t able to generate a single shot attempt with the advantage.

The Islanders had opened the scoring for a fifth consecutive game in the series. At 4:15 of the first period, Toews took a pass from Lee and then cut wide around the net before tucking a wraparound shot into the unguarded corner of the net.

Just 2:13 later, Hedman drew the Lightning even with his ninth goal of the playoffs. Working along the side boards, Hedman fed his fellow defenseman Erik Cernak for a wrist shot from the top of the zone and then cycled into the slot, collecting the big rebound that came off Varlamov’s pads and sending it into the net with a wrist shot.

The goal was Hedman’s fourth of the conference finals and tied him for the third most by a defenseman in N.H.L. playoff history. Kucherov drew the second assist on the goal for his 26th point, moving into sole possession of first place in the postseason point race.

Tampa Bay’s Stanley Cup finals opponent, the Dallas Stars, won the Western Conference on Monday with a 3-2 overtime win over the top-seeded Vegas Golden Knights, eliminating them in five games.

More than three months after they were originally scheduled, the Stanley Cup finals will begin Saturday in Edmonton.

How carnivores are being given new life in Europe