Lou Henson, who led New Mexico State and the University of Illinois to the Final Four in a 42-year head-coaching career in which he piled up almost 800 victories, died on Saturday at his home in Champaign, Ill. He was 88.

Kent Brown, the associate director of athletics and media relations for the Illinois athletic department, confirmed the death on Wednesday, the same day the university said Henson was buried in a private ceremony.

Henson learned he had non-Hodgkin’s lymphoma in 2003 but continued to coach New Mexico State in the 2003-4 season. In September 2004 he was hospitalized with viral encephalitis, which left his right leg paralyzed, requiring him to use a wheelchair. In January 2005, two days before he was scheduled to return to lead the Aggies, he was hospitalized with pneumonia. Two weeks later, he retired.

“I have always been a very demanding coach,” he said in announcing his retirement. “I expect my players to give 100 percent or they come out of the game. I can expect no less of myself, so because I am physically unable to give my all, I am taking myself out of the game.” 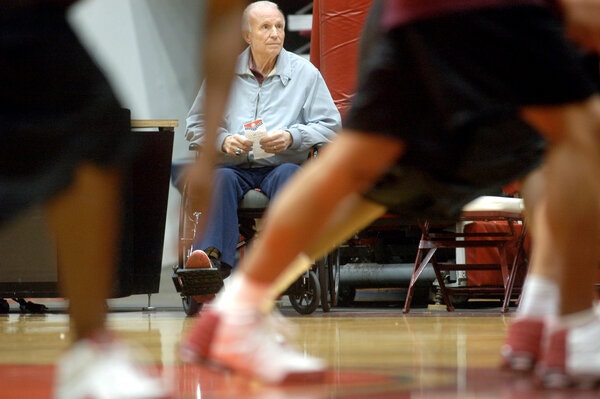 He had retired from the Illinois job, in Champaign, when he returned to New Mexico State to help rescue the basketball program. At the time, only one of the team’s players had graduated in five years, and the N.C.A.A. had put the team on probation.

Henson took 19 teams to the N.C.A.A. tournament and four to the National Invitation Tournament. He reached the N.C.A.A.’s Final Four with New Mexico State in 1970 and with Illinois in 1989. A year after Illinois got there, it received severe penalties from the N.C.A.A. for recruiting violations.

The Illinois team, led by the future professionals Kenny Battle, Kendall Gill, Nick Anderson and Stephen Bardo, racked up 31 wins in the 1988-89 season before losing to Michigan by two points in a Final Four semifinal game at the Kingdome in Seattle. (Michigan went on to win the title, beating Seton Hall.)

Henson’s career coaching record was 779-413. When he retired, only four coaches (Dean Smith, Adolph Rupp, Bob Knight and Jim Phelan) had won 800 games in Division I, and only Knight was still coaching. Today, Henson is ranked 15th among coaches with the most career wins, 12 of whom have notched more than 800 victories. (Mike Krzyzewski, who is still active at Duke, has the most, 1,132.)

Henson was named to the National Collegiate Basketball Hall of Fame in St. Louis in 2015, the same year the basketball court at the State Farm Center in Champaign was dedicated in his honor.

Away from the court, Henson was genial and charming. On the court, he was all business, stressing defense, two-handed passes and conservative ball handling.

“He’s an old-school guy, and he insisted on doing things soundly,” Derek Harper, an Illinois player who became an outstanding professional, told The Chicago Tribune in 1996. Eddie Johnson, another former player, said of Henson: “He never wavered in his demeanor. I think that’s what made him a great coach, because you always knew what to expect.” 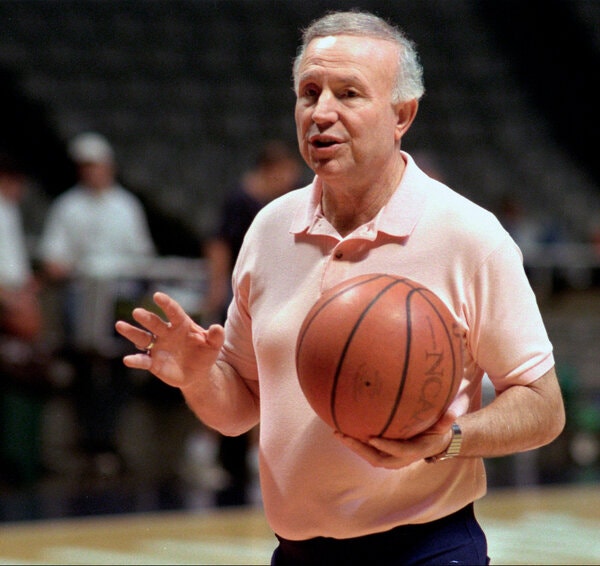 Louis Raymond Henson was born Jan. 10, 1932, in the small town of Okay, Okla., to Lora (Falconer) and Joe Henson, who were sharecroppers. One of eight children, he grew up in a house with no indoor plumbing.

At New Mexico State, he earned a bachelor’s degree in secondary education in 1955 and a master’s in educational administration in 1956. A year later, he started his coaching career as the junior varsity coach at Las Cruces High School. He married Mary Brantner in 1954.

His survivors include his wife and three daughters, Lori Henson, Lisa Rutter and Leigh Anne Edison; a sister, Rosemary Yates; a brother, Ken; 12 grandchildren; and seven great-grandchildren. A son, Lou Jr., was the basketball coach at Parkland College, a community college in Champaign, when he was killed in an automobile accident in 1992.

After his retirement, Henson split his time between Las Cruces and Champaign. A passionate bridge player, he participated in many local tournaments. In his later years, as he dealt with his lymphoma, he golfed and swam regularly.

Henson was proud of his players’ post-collegiate achievements. He evvel said, “I have doctors, lawyers and business people all over the country.”

He acknowledged the pressures of his job. “It’s not a olağan profession,” he said. “If you don’t learn to live with it, you don’t coach.”

Through all the late-hour demands, he found time for his growing daughters. Lori, the eldest, told The Chicago Tribune in 1995, “We lived our father’s career.” She added: “It’s part of your life. It surrounds you.”

Leigh Anne, the youngest daughter, said that as a child she would draw basketball plays and leave them on her father’s desk.

“After the game,” she said, “he would say, ‘Did you see that play of yours we used?’ And I’d say yes. I believed it for the longest time.”