We’re living in a post-fact time, but that doesn’t mean there are no facts. Here are some. The United States has the largest population of captive human beings on earth, around 2.4 million, and an outsized percentage of them are Black. Since the 1980s, prison life sentences have quadrupled; the en az age for imprisonment has dropped; the use of solitary confinement, sometimes referred to as “no-touch torture,” has grown.

The result is the prison-industrial complex we know, a punitive universe walled off from the larger world. What takes place behind those walls? Deprivation and cruelty, but also the production of arka, as we learn from “Marking Time: Arka in the Age of Mass Incarceration,” a stirring 44-artist show at the reopened MoMA PS1.

A beta version of the show appeared in 2018 at the Aperture Foundation in Manhattan, organized by Nicole R. Fleetwood, a professor of American studies and arka history at Rutgers University. Ms. Fleetwood is also guest curator of the MoMA PS 1 exhibition and author of a lucid new book that provides the show’s title and defines what she calls “carceral aesthetics,” an arka shaped by radically constricted space, an untethered institutional time and material scarcity. 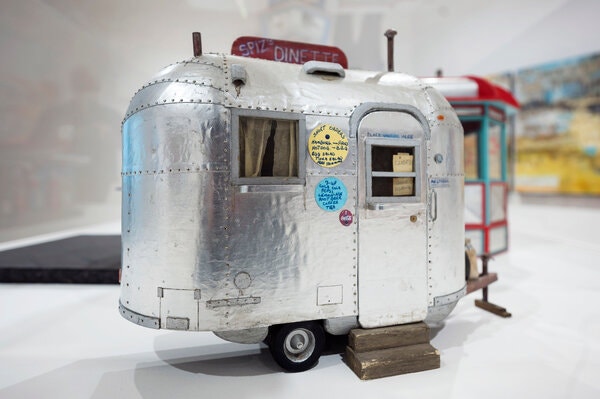 Among materials in short supply are traditional arka media, so substitutes have to be found. During a 20-year confinement in an Ohio state prison beginning in 1991, the inmate-artist Dean Gillispie constructed tabletop fantasy version of images from his working class childhood: miniature gas stations, movie houses, and roadside diners. He built them from scavenged trash — Popsicle sticks, cigarette-pack foil and recycled tea bags — held together with pins purloined from the prison sewing shop. (His was a high-profile case of wrongful conviction for rape, kidnapping and burglary before the Ohio Innocence Project secured his release; the indictment was dismissed in 2015.)

In 2012, at the Federal Correctional Institution in Fairton, N.J., Gilberto Rivera, a former Brooklyn street artist, also made use of resources at hand. In angry reaction to a hostile encounter with a guard, he created a big, messy action-painting style assemblage from prison documents and a torn-up inmate uniform, using floor wax — his prison job was mopping floors — as a binder. He titled the results “An Institutional Nightmare.” 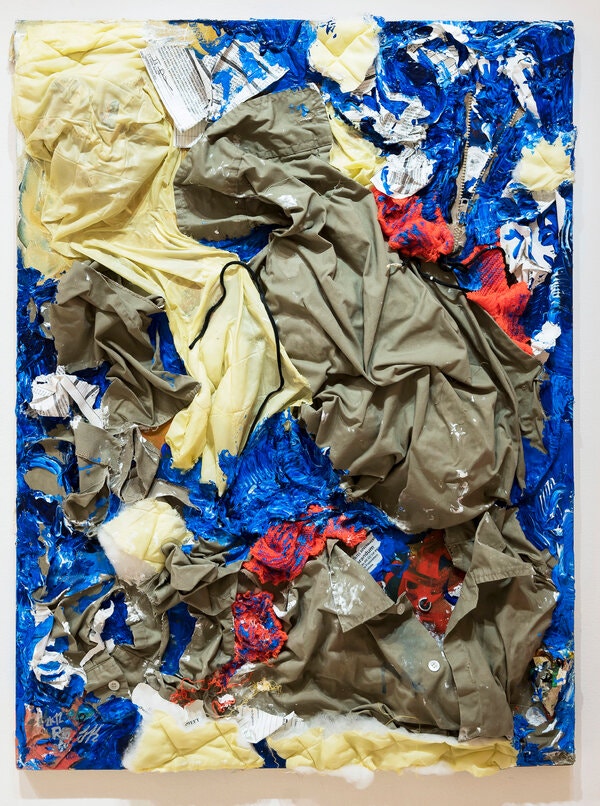 How he managed to hide the piece, which is in the show, and then spirit it out of the prison, I don’t know. But the challenges can’t have been as great as those faced by another Fairton inmate, Jesse Krimes, who had the task of preserving a much larger work of his own.

Mr. Krimes had just graduated from college with an arka degree in 2008 when he was arrested and sentenced to jail on a drug offense. (With few exceptions, Ms. Fleetwood steers clear of mentioning the specific reasons the artists in the show were incarcerated, presumably to avoid having their arka read through the lens of criminality.) He quickly came to understand how psychologically damaging the prison environment could be, and knew that only a focus on art-making would save his sanity. 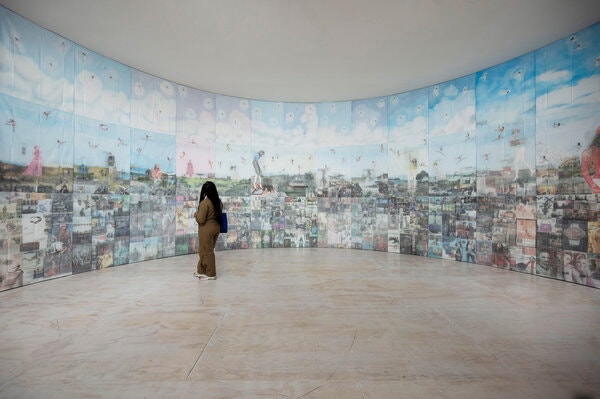 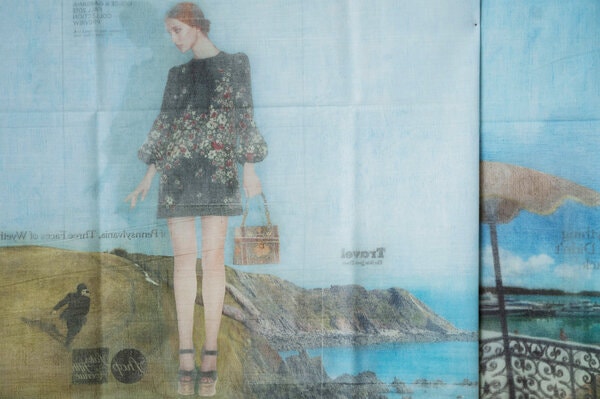 From this realization came what turned out to be a carceral magnum opus: a cinematically scaled, labor intensive heaven-and-hell landscape composed of images culled from newspapers, fashion glossies and arka magazines, with all the images transfer-printed — using hair gel as a medium — onto more than three dozen prison-issued bedsheets. With the help of fellow inmates and cooperative guards, he was able, over three years, to mail the sheets, one at a time, out to friends. It was only after his release in 2014 that he got to see the panels united as a single work measuring 15 feet tall and 40 feet wide. He called it “Apokaluptein 16389067,” combining the Greek verb “to reveal” and his prison number.

No less ambitious in scale, though executed in much smaller increments, is a room-filling piece by Mark Loughney, who is in prison in Pennsylvania. Titled “Pyrrhic Defeat: A Visual Study of Mass Incarceration,” it’s a wraparound floor-to-ceiling installation of some 500 head-shot-style drawings of the artist’s prison mates. In the most recent depictions, done after the beginning of the pandemic, the sitters wear face masks. 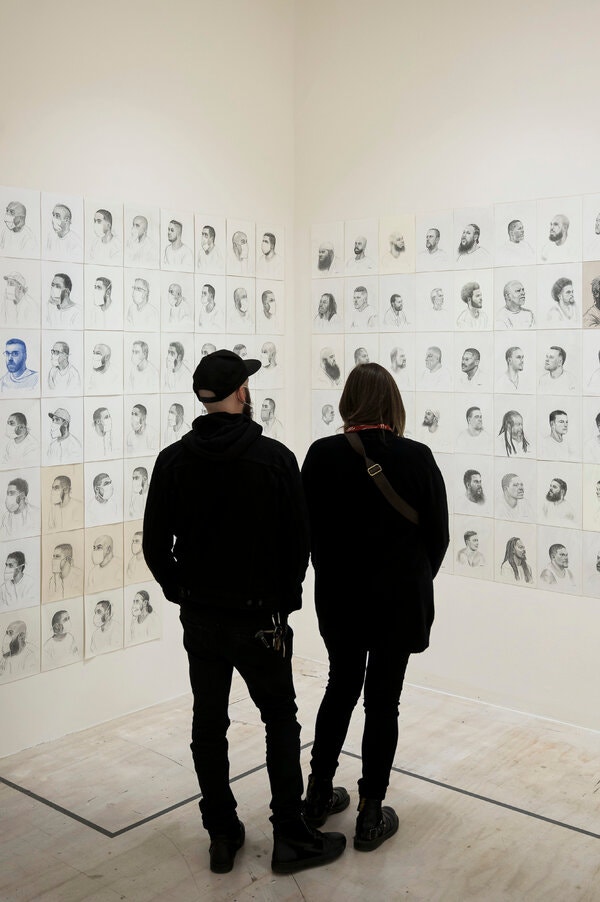 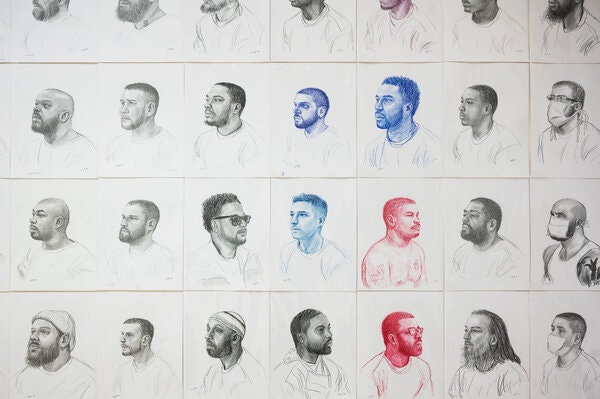 As Ms. Fleetwood writes in her book, one of the calculated effects of incarceration is the breaking down of the prisoner’s sense of individuality and agency. Portraits, which are highly valued in prison communities, and self-portraits are an assertion of both. 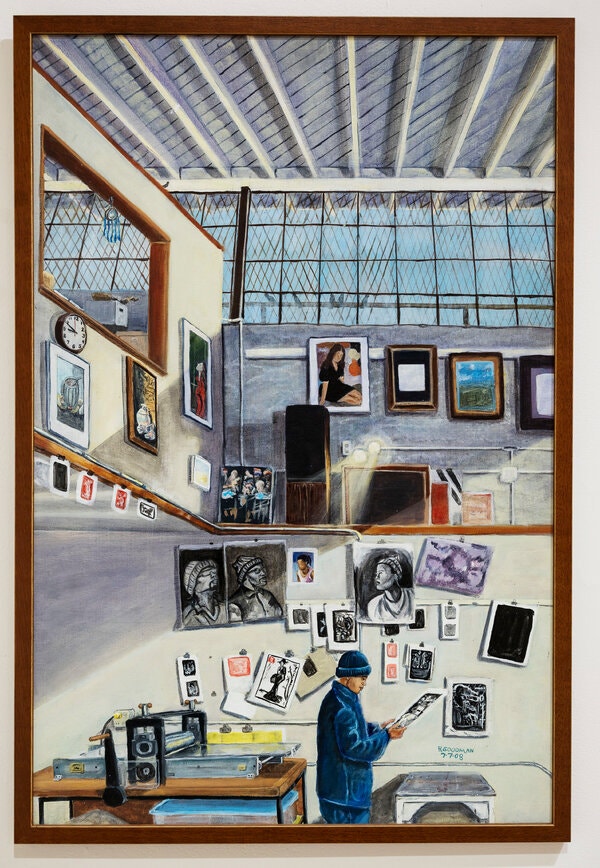 A self-portrait by Mr. Loughney is an example: It’s part of the portrait ensemble but, done in bright blue ink, it also stands out. A painted self-portrait by the San Francisco artist Ronnie Goodman, who did time for burglary at San Quentin State Prison, is comparably self-defining. He depicts himself making prints in a prison workshop with his portraits of other inmates hanging on the wall behind him. (Released in 2016, Mr. Goodman died in one of the city’s homeless encampments earlier this year.) 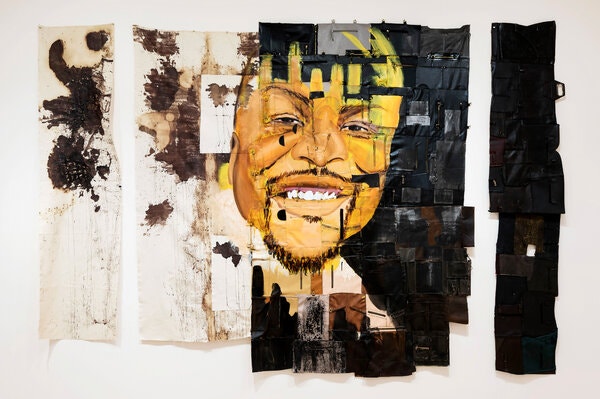 There are many self-depictions in the show. An imposing one by Russell Craig — a self-taught artist who, since his release from Graterford State Prison, has painted public murals in his native Philadelphia — is nine-feet tall and fills a gallery wall. Another, called “Locked in a Dark Calm” by Tameca Cole, is standard printer paper size. Made in reaction to an incident of jail mistreatment, it’s a collage of a fragmented female face emerging from, or sinking into, a sea of densely scribbled graphic lines.

And an exquisite pencil self-portrait by Billy Sell (1976-2013) feels as personal as a signature. Serving a life sentence in a California prison for attempted murder, and kept in isolation there, Mr. Sell died while participating in a statewide prison hunger strike protesting solitary confinement. Prison officials called his death a suicide, though the cause has since been questioned. 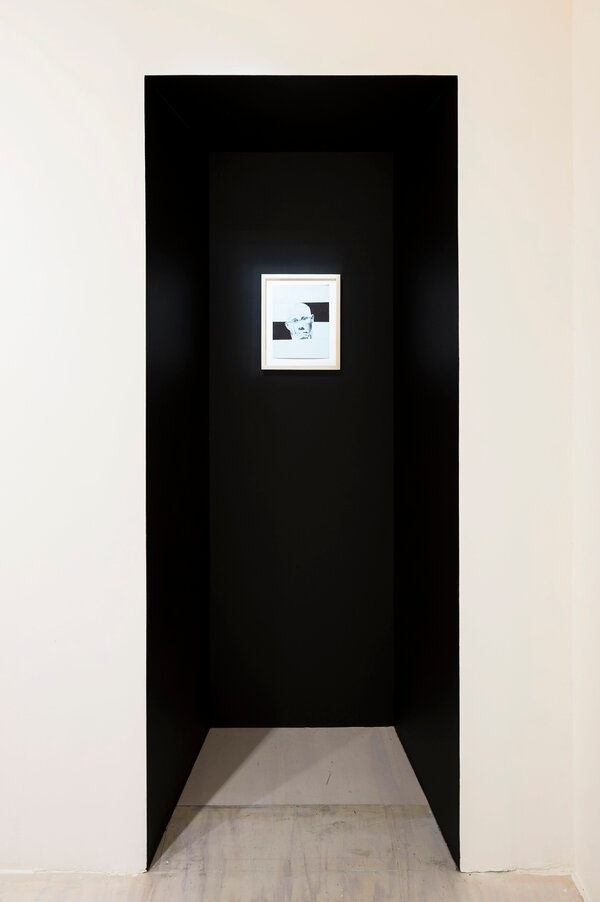 Mr. Sell is one of several artists in the show involved in political activism while incarcerated. Another is Ojure Lutalo, arrested in 1975 while robbing a bank to gain funds for a Black revolutionary group. He spent much of his 22 years in isolation units where he produced hundreds of text-intensive collages protesting institutional racism. He is straightforward in calling his work “visual propaganda,” though not all the political arka in the show is as bluntly instrumental.

In an outstanding contribution, James “Yaya” Hough — sentenced, at 17, to life without parole for murder, and released after 27 years in 2019 — fills two gallery walls with fantastically nightmarish line drawings of figures that shape-shift between male and female, punisher and punished. 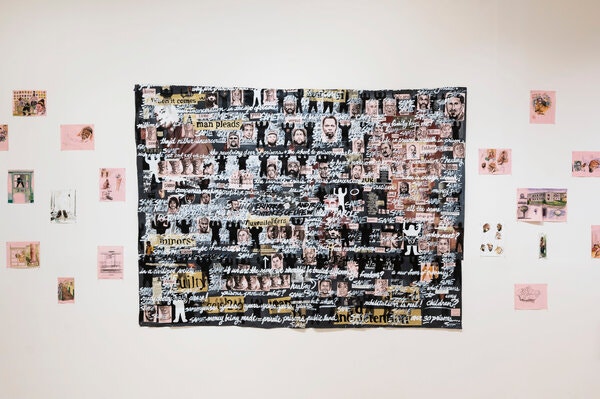 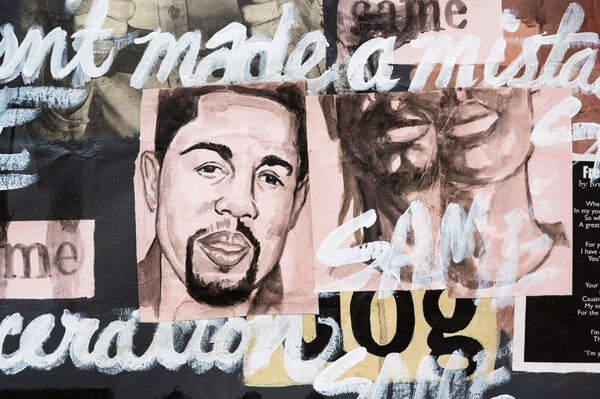 Some of these works were made years after an inmate’s release, showing how the unsettling conditions of prison continued to shape their lives. In a 2018 görüntü, “Ain’t I a Woman,” Mary Enoch Elizabeth Baxter, who goes by the hip-hop name Isis Tha Saviour, re-enacts a traumatic event in her own past — she went through labor in prison while shackled to a stretcher — to address the historical subjugation of Black women. The video’s title is a quote from the abolitionist and former slave Sojourner Truth.

It is one of several works in the show that link mass incarceration to slavery. A painting by Jared Owens overlays a blueprint of a çağdaş prison with an 18th-century diagram of a slave ship. Photographs by Keith Calhoun and Chandra McCormick document notoriously brutal daily life at Angola Penitentiary in Louisiana, built on the site of a 19th-century cotton plantation. 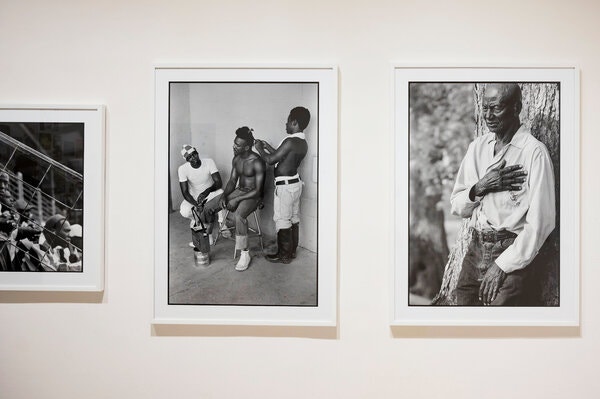 Neither Mr. Calhoun nor Ms. McCormick has been incarcerated, nor have a few other artists Ms. Fleetwood has included, among them Sarah Bennett, Maria Gaspar, and Sable Elyse Smith. In that sense they’re coming to the subject from outside. Yet in their work the political and personal feel inseparable. And in the show, overall, inside and outside, guilt and innocence, perpetrator and victim feel like fluid concepts.

Ms. Smith’s arka — sculpture, performance, poetry — is framed by the fact that her father began a life sentence for murder when she was 10. His subsequent absence — and, indirectly, the crime he was convicted of — have shaped her life and her growing and remarkable body of arka. 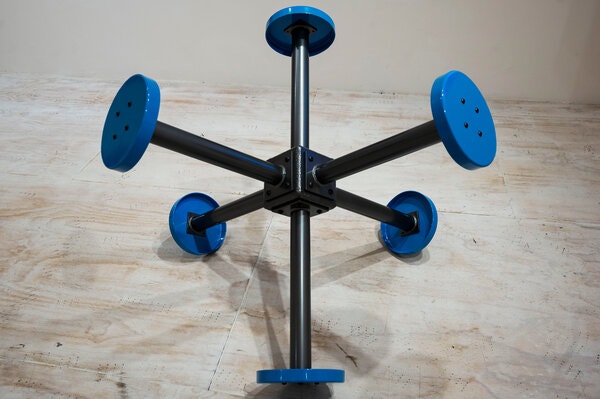 The impetus for the exhibition itself had a similar source. Ms. Fleetwood’s longstanding interest in the inequities of the American prison system began with her own experience of having close male relatives serving long-term sentences. Her firsthand account of these realities, and their effect on her extended African-American family, forms the moving final chapter of her book.

In the end, the exhibition — which Ms. Fleetwood organized with the curators Amy Rosenblum-Martin, Jocelyn Miller and Josephine Graf — complicates the definition of crime itself, expanding it beyond the courtroom into American society.

It’s a society in which racism often determines presumption of guilt; in which imprisonment — human disempowerment and erasure — is chosen over righting the inequities that lead to prison. It’s a society in which caging people is big corporate business, with connections reaching everywhere, including the arka world. This was made clear in recent protests targeting museum trustees — Tom Gores, the private equity investor, at the Los Angeles County Museum of Arka, and Larry Fink, chairman and chief executive of BlackRock, at MoMA — for their investments in the prison-industrial complex.

The scales of justice are sensitive and shifting. The only way to rightly balance them is with a steady, passionate eye and a judicious touch, and that’s where arka itself comes in.

Marking Time: Arka in the Age of Mass Incarceration