MAMARONECK, N.Y. — In May, with most küresel sports competitions suspended because of the coronavirus pandemic, the veteran golfers Dustin Johnson, Rory McIlroy and Rickie Fowler competed in a made-for-TV charity match. Almost as a lark, or perhaps to lure a younger audience, Matthew Wolff, a 21-year-old PGA Tour newcomer, was invited to play, too.

At the time, Wolff was known mostly for his peculiar preshot twitch, his quirky swing and his long drives, and he clearly appeared nervous at the start as he sprayed shots around the course. But his presence was charming, like an overanxious kid brother who nonetheless puts everyone at ease. At one point, in mock derision, McIlroy, 31, referred to Wolff as “youngster.”

After Saturday’s third round of the 2020 United States Open, in which Wolff shot a five-under-par 65 to take a two-stroke lead heading into the championship’s final day, McIlroy chose different words when describing his friend.

With his round in blustery conditions at the daunting Winged Foot Golf Club, which moved him to five under for the tournament, Wolff rose up the leaderboard on a day when many of the game’s top players struggled with unpredictable winds, deep rough and fast greens. Wolff will be paired on Sunday with another long-hitting personality of this golf season, Bryson DeChambeau, who shot a 70 and finished Saturday at three under par.

It figures to be an enticing matchup and a display of new-era power, although a mix of seasoned and younger players is not far behind. The former British Open champion Louis Oosthuizen is alone in third at one under par, and Xander Schauffele, Harris English and Hideki Matsuyama are at even par, a shot ahead of McIlroy.

Although, as Schauffele said of Wolff, “If he plays the same way he did today, it’s going to be almost impossible to catch him.”

If Wolff is victorious, it will be the first time a player has won the U.S. Open in his debut at the event since Francis Ouimet did so in 1913.

Wolff, who shot a 30 on Winged Foot’s front nine, did not drive the ball that accurately, hitting only two of 14 fairways. But his misses were often not that far into the course’s thick rough, and his length off the tee helped make up for his miscues. He was precise with his iron play, hitting 13 greens in regulation, and putted with the poise of a veteran who had played in 20 majors instead of looking like a young pro who had taken part in only two (Wolff’s first major appearance was at last month’s P.G.A. Championship, in which he tied for fourth).

Wolff, who has now shot in the 60s in six of the seven rounds he has played in majors, said he believed that the more challenging conditions typical at those events brought out the best in him. 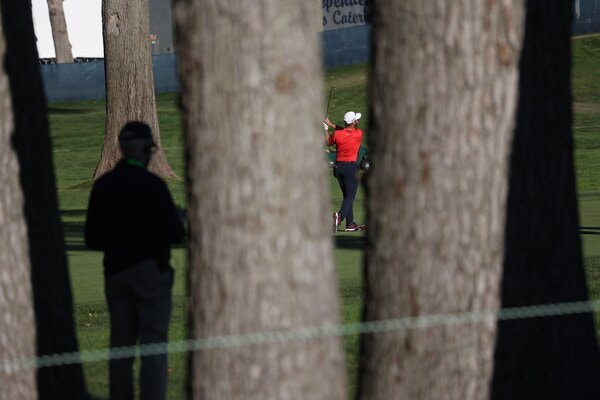 “I’ve always excelled on hard courses,” he said. “I have the swing speed to get the ball out of deep rough, and I have the right mind-set when things aren’t going so well.”

He added: “It’s golf — I know things aren’t going to go right out there. You have to stay calm.”

A test on Saturday came at the 16th hole, where Wolff slashed his tee shot into the trees to the left of the fairway. He had a small opening to the green but eschewed the risky shot and chipped safely instead. That led to Wolff’s only bogey of the third round, but he rebounded with a par on the 17th hole and a birdie on the final green.

“I wasn’t upset or anything; I just knew I had to minimize the damage,” Wolff said of the 16th hole. “You have to keep thinking and make the smart play.”

Patrick Reed, the second-round leader, and DeChambeau, who began Saturday’s round one shot off the lead, teed off 45 minutes after Wolff. DeChambeau immediately found trouble, bogeying on the first green because of three putts. His tee shot on the second hole then found the rough to the left of the fairway, which led to another bogey. But DeChambeau settled into a long run of consistent scoring after that. 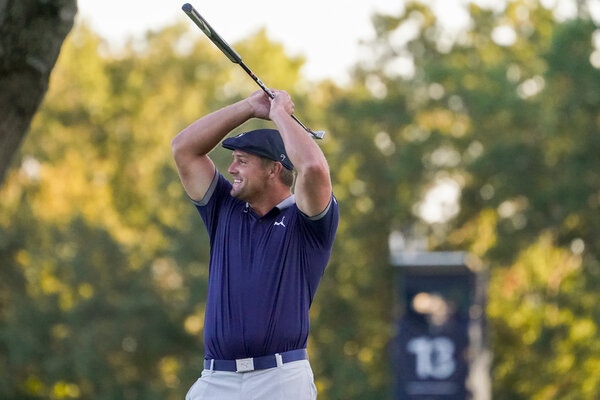 Reed, so consistent in the first two rounds, also had a rough start on Saturday, with two birdies and two bogeys in his first five holes. After three routine pars, he gained some momentum with a birdie on the reachable par-5 ninth hole and seemed to be regaining his form. But a poor tee shot on the treacherous par-3 10th hole, and an equally inadequate chip, led to another bogey. Reed flubbed another chip on the 11th hole, one of the easier holes on the course, and ended up making double bogey there. At that moment, Reed, who had been at the top of the leaderboard for most of the afternoon, dropped three strokes behind Wolff.

It got worse. Reed added three more bogeys in the next four holes, and then — after a stabilizing par at No. 16 — closed with two more. His seven-over 77 left him in a tie for 11th place, but eight shots off the lead.

As the golfers in the featured groups jockeyed for the lead, Matsuyama was charging from behind with six birdies in his opening 14 holes. But like so many other players, Matsuyama’s scorecard was a mix of good and bad, including bogeys at the second, third and seventh holes. He rallied, but a bogey at No. 15 and a double on the 17th marred an otherwise promising round. Matsuyama still shot a 70, which left him at even par for the tournament.

Playing one of the more error-free rounds of the day was McIlroy, who shot a 68 with three birdies and only one bogey.