She was confirmed with overwhelming bipartisan support.

Twenty-seven years later, as Justice Ginsburg’s death roils the country and injects new uncertainty into an already bitter presidential race, one element is all-but certain: The country will soon have a fifth woman nominee to the Supreme Court.

Mr. Biden, now the Democratic candidate for president, has pledged to “make history” and appoint the first Black woman to the Court should he have the chance.

President Trump, who is expected to make an actual nomination this week, has made a similar promise. He, too, plans to name a woman — “a very talented, very brilliant woman.”

The proclamations from both men about how each would replace Justice Ginsburg, a pioneering force for gender equality on the court, have reflected conspicuous signaling by both parties as they rush to appeal to crucial constituencies ahead of the election. The pledges draw on a traditional political tactic: one way to seek to appeal to women is with women, as surrogates and in positions of power. But that approach has stirred complicated feelings in women across the country — and it may not be the most effective.

“Public opinion surveys about political candidates have shown that women have a slight preference for other women, and men have a slight preference for other men, but the more popular response is ‘it depends’ or ‘it doesn’t matter,’” Kellyanne Conway, one of Mr. Trump’s longest-serving aides and a veteran Republican strategist, said in an interview. “There is a difference between sharing my gender and the more consequential sharing my values, principles and positions on issues.”

In interviews with voters, lawyers and female leaders across the political spectrum, some women were strongly enthusiastic about the pledges to elevate a woman, some resignedly saw them as flawed but necessary and others harbored concerns of being condescended to and having a significant appointment cheapened.

“We need more women in power. It’s crucial,” said Eileen Letts, a former co-chair of the American Bar Association’s commission on diversity and inclusion and a partner at the firm Zuber Lawler. “But in the situation of the Supreme Court, one has to be more careful and more vigilant because a woman of certain ideological beliefs may not be the best person for other women.”

Adding to the heated dynamics is the battle over women’s reproductive rights that is almost certain to take place. A conservative majority on the court could overturn Roe v. Wade, the landmark 1973 ruling that legalized abortion nationwide, a galvanizing issue for activists in both parties — especially women, for whom the issue is deeply personal.

Even before Mr. Biden secured the Democratic nomination, he promised to name a woman as his vice president and appoint a Black woman to the Supreme Court as a way to appeal to the liberal, diverse coalitions within his party as a white man belonging to the Washington establishment. His commitments were in line with his record: As a senator, he was more resolved than many colleagues to surround himself with accomplished women, and he still to this day considers the Violence Against Women Act his signature legislative achievement. 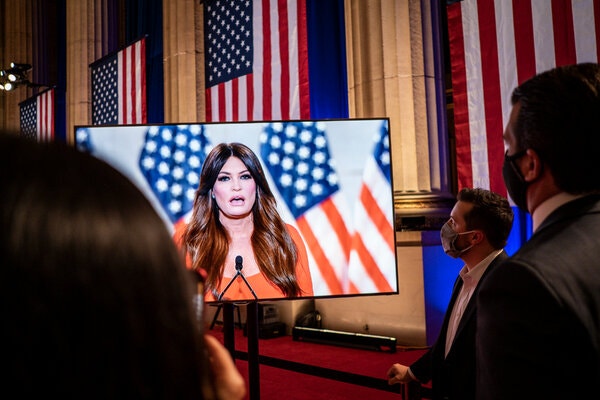 Mr. Trump and the Republican Party, too, have made pointed appeals in seeking to recast the president’s record on gender and race. At their convention last month, they lined up women to testify that the president was — in private — sensitive and sympathetic, and they stretched to find African-Americans who insisted he was not racist.

And seeking to flip accusations of pandering back on the Democratic nominee, Republicans took aim at Mr. Biden’s public commitments to appoint women to powerful positions — even if weeks later Mr. Trump would designate Justice Ginsburg’s seat for someone of her same gender.

“I don’t want a job because of my gender, I want the job because I’m the best person for that position. That’s it,” Kimberly Guilfoyle, a senior fund-raising official for the Trump campaign and former Fox News host, said at the Republican convention. “And he respects that.”

Yet among Democratic women, the debate over Mr. Biden’s pledge has been particularly acute, as the party wrestles with how to reflect in its leadership the diversity of its base.

Since Mr. Trump’s election in 2016, women, young people and minorities have energized the Democratic Party and run for office in historic numbers. A record number now serve in Congress. But it was Mr. Biden who emerged from a racially diverse field featuring more female candidates than ever, having successfully framed himself as best positioned to beat Mr. Trump.

Now, Mr. Biden’s explicit promises to elevate women have left some frustrated by what they see as political posturing, wishing he had kept his intentions private and simply named a woman.

“You should consider men, consider women, and if you think a woman is the best person for the job, then pick her anyway,” Christina Gatti, a recent college graduate and higher education consultant, said over the weekend, sitting on a bench in New York’s Washington Square Park, where a vigil had taken place for Justice Ginsburg. “The idea that we’re just going to pick a woman to appease women is patronizing.”

For others, the emphasis on gender has been bittersweet — a sign of progress, but also an indication of how far the country has yet to go for true equality, when women might ascend to positions of power without having a spot earmarked for them. 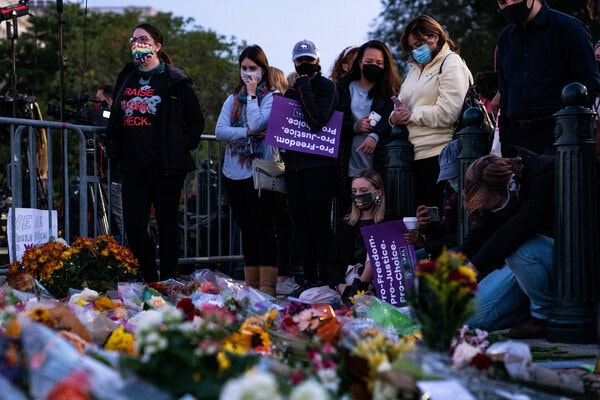 “I’m not suggesting that one has quotas,” said Randi Weingarten, the president of the American Federation of Teachers, a national union. “But it is necessary to be intentional about diversity because that intentionality changes hearts and minds.”

Sara Nelson, the president of the Association of Flight Attendants union, said that Mr. Biden’s specific focus on elevating a Black woman would ensure that a critical perspective that had never before been reflected on the court would be included in the country’s most important kanunî decisions.

“It’s a follow-through on a broader commitment from Biden to make mühlet that women’s voices are at the table,” Ms. Nelson said.

Many, though, said that before race and gender, they wanted Justice Ginsburg’s successor to share her approach to the law.

“We always like to see more women at every decision making-table in the country,” said Stephanie Schriock, the president of Emily’s List, a group that works to elect Democratic women who support abortion rights. But she said that when it came to elections and political appointments, the focus should be on “finding the right person” who is best qualified to protect “the rights of all of us.”

“I think it’s really important for everybody that it isn’t just about gender,” she said.

Some liberal women like Ms. Gatti were more explicit, saying they would rather see a liberal man in the seat than a woman whose politics were to the right of Justice Ginsburg’s.

“I think she would absolutely prefer someone who maybe didn’t identify as a woman but was interested in upholding freedoms for women,” Alyssa Galella, who works in public relations in Los Angeles, said of what she imagined Justice Ginsburg’s own preference might be.

“Some people forget that she fought for gender equality overall,” added Ms. Galella, who last year had a quotation of Justice Ginsburg’s — “I am very much alive” — tattooed on her forearm. “She represented men in cases where their rights were trampled on.”

Conservatives have sought to frame the women on Mr. Trump’s short list as in the mold of the liberal icon — at least in terms of their having also forged paths for their gender in the yasal profession. “I think this is an exciting time for women,” said Carrie Severino, president of the conservative Judicial Crisis Network, a group that has pushed for the confirmation of Mr. Trump’s appointees to the Supreme Court. “These are the kind of women I think who could follow in Justice Ginsburg’s own trailblazing footsteps and really make an incredible mark on the court.” 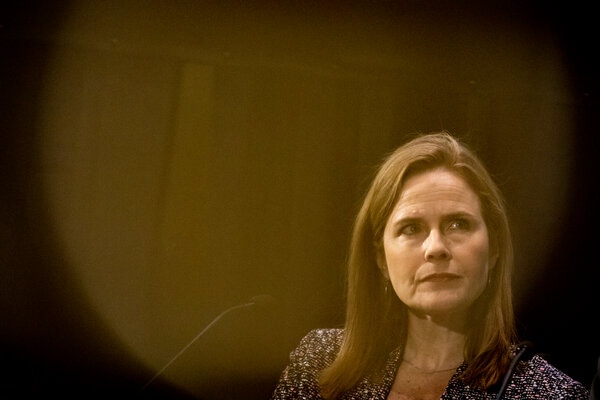 During the 2016 race, Mr. Trump took the unusual step of releasing a list of specific people he would consider nominating to the Court. In 2020, he did so again. Ms. Conway, who managed the 2016 campaign, drew a distinction between Mr. Biden’s pledge to name a woman and the president’s recent one.

“Biden provided an identity, not an individual,” Ms. Conway said. “His statement would preclude consideration of qualified men and, ironically, of Justice Ruth Bader Ginsburg herself.”

Mr. Trump has vowed to appoint judges who would strike down Roe v. Wade, making it particularly unlikely that liberal women would applaud the president’s eventual choice.

“The question is not a woman versus no women, but whether or not a woman represents the views and welfare of most women,” Gloria Steinem, the political activist and advocate for women’s rights, said.

Gender-related promises in the name of achieving parity were guaranteed to inspire some voters and exasperate others, said Catharine A. MacKinnon, the feminist lawyer and political scientist who teaches law at the University of Michigan and at Harvard.

“They’re trying to position themselves in a way that’s advantageous, and it’s a crapshoot,” she said, of candidates choosing whether or not to flaunt the demographics of a nominee.

Ms. MacKinnon said she believed that the foolproof way to transcend the debate was to select a nominee with especially strong credentials. She pointed to Senator Kamala Harris, the woman whom Mr. Biden ultimately chose as his running mate after considering a group of candidates from across the Democratic spectrum.

“I don’t think anybody is saying she’s there just because she’s Black and she’s Asian.”