Two N.F.L. teams locked arms and knelt. A star quarterback wore cleats bearing the message “No Justice No Peace.” The phrase “End Racism” was stenciled on the field, which many players avoided during the playing of the national anthem.

A year ago, such demonstrations would have ignited a fierce debate among fans and hand-wringing by the league’s owners. But now, after an off-season punctuated by protests and a pandemic, the players’ actions, with the endorsement of the N.F.L., had the air of a foregone conclusion.

Even so, there was no consensus on what action, if any, to take in such tumultuous times, and several teams, wanting to avoid controversy of any kind, stayed in their locker rooms during the playing of the national anthem and the song “Lift Every Voice and Sing,’’ known as the Black national anthem, which the N.F.L. arranged to have played before games in the opening week of the season. Their absence appeared to dilute the pledge many players had made to use their positions to raise awareness of racial injustice, even without fans in most stadiums. 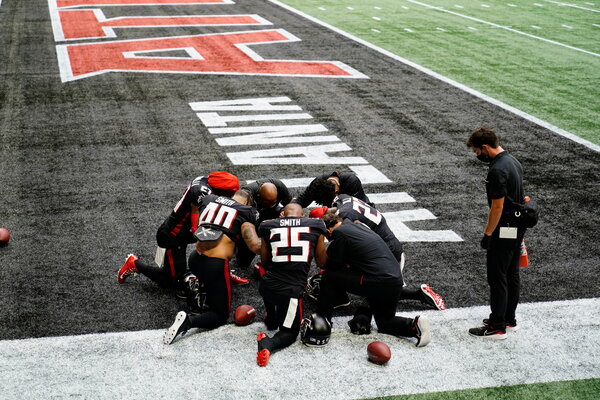 Still, there were plenty of gestures. Like other teams, the Atlanta Falcons linked arms during the anthems. Several members of the opposing team, the Seattle Seahawks, knelt or raised a right fist. Seahawks quarterback Russell Wilson formed a triangle with a coach and another player, Geno Smith.

On the opening kickoff, players on both teams stood in place as the Falcons let the ball go for a touchback. Then every player briefly took a knee, a display of unity coordinated by Wilson and Falcons quarterback Matt Ryan. The Falcons earlier named John Lewis, the civil rights icon and congressman who died in July, as their honorary captain.

Cam Newton, making his debut as the quarterback of the New England Patriots, wore cleats saying “7 Shots” and “No Justice No Peace.”

During warm-ups, Indianapolis Colts players and coaches wore shirts that read Black Lives Matter, something other clubs did as well. Their coach, Frank Reich, knelt during the national anthem as his players stood. Two players on the San Francisco 49ers sat during the anthem.

In Minneapolis, the Vikings honored George Floyd and other victims of racial violence. The team did not sound its Gjallarhorn, which it blows to fire up fans, at Sunday’s game. 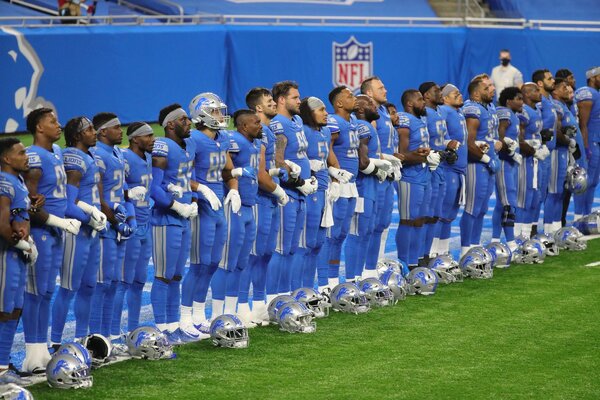 Their opponent, the Green Bay Packers, stayed in the locker room during the playing of the national anthem and “Lift Every Voice and Sing,” the team said, “so as to not distract from our message that we stand united for social justice and racial equality.”

In the late game at Los Angeles, all but two of the Rams players went to the locker room when “Lift Every Voice and Sing” was played, but the Rams and the Dallas Cowboys were both on the sideline for the national anthem. About a dozen Rams and one Cowboy, Dontari Poe, knelt.

While other sports leagues were delayed, interrupted and shut down by the coronavirus, starting in March, the N.F.L., the nation’s most popular league, overcame myriad hurdles to begin its regular season on time, albeit with a vastly altered look because of the pandemic. Stands were empty, no cheerleaders strutted the sidelines and the singers performed the national anthem and “Lift Every Voice and Sing” from remote locations in most cases.

Even the field reflected the turmoil of this past spring and summer, with the messages “End Racism” and “It Takes All of Us” stenciled in the end lines. After initially ignoring, then coming around to embrace, the efforts by players to fight social injustice and end police brutality, the N.F.L. reaffirmed the players’ right to peaceful protest, echoing the N.B.A., Major League Baseball and other leagues that returned to action earlier. Players wore league-approved decals on their helmets calling for unity and an end to hate and racism.

The players took advantage of the league’s embrace of their efforts, even at the cost of alienating fans who do not want social statements to encroach on their sports viewing. The gesture of kneeling during the anthem was started by 49ers quarterback Colin Kaepernick in 2016; he hasn’t been picked up by a team since opting out of his contract in March 2017 and has become a potent symbol of protest across sports.

“The days of ‘sports and social issues aren’t going to mix,’ that’s the old world,” said Michael Rubin, a social justice activist and the executive chairman of Fanatics, which operates merchandise websites for the N.F.L. and other major leagues. “These issues are top of mind, and the players are going to use their platforms. I don’t see any chance of this reversing course.”

Still, as the self-proclaimed “America’s game,” the N.F.L. remains a lightning rod for controversy in everything it does. To avoid being swept into the debate inflamed by President Trump over whether it is unpatriotic to protest during the playing of the “Star-Spangled Banner,” the Buffalo Bills, the Jacksonville Jaguars, the Jets and the Miami Dolphins, as well as the Houston Texans, who played Thursday, stayed in their locker rooms during the anthem. The Arizona Cardinals did the same, while their hosts, the 49ers, were on the field.

“We don’t need another publicity parade, so we’ll just stay inside until it’s time to play the game,” the Dolphins’ players said in a görüntü released Thursday.

Other players reversed themselves. Baker Mayfield, the Cleveland Browns quarterback, said he would not kneel during the national anthem because “I have been showed that a gesture such as kneeling will only create more division or discussion about the gesture, rather than be a solution towards our country’s problems at hand,” he wrote on Twitter on Saturday.

New Orleans Saints quarterback Drew Brees, who was criticized in June by other players, including some of his teammates, for saying that he would not kneel because he did not want to disrespect the military or the flag, stood during the national anthem. But during warm-ups, he wore a shirt that said, “Say Her Name,” a reference to the outcry over the police killing of Breonna Taylor in Louisville, Ky.

The events on Sunday were an echo of leaguewide protests that occurred three years ago after Mr. Trump called on owners to fire any players who did not stand for the national anthem. Those demonstrations, by hundreds of players across the league, were hastily planned and largely petered out after a few weeks. The league did not penalize the players, but the owners, several of whom donated lavishly to the president’s inauguration that year, later tried to tamp down player protests before dropping the effort when the players’ union filed a grievance.

This year is different. Commissioner Roger Goodell in June apologized for not listening earlier to the concerns of African-American players, who make up about 70 percent of the league. Coaches across the league have set aside time for their players to discuss their concerns about current events. White players who were largely silent have joined player social justice committees.

Some owners have also spoken about the need to work with players in their efforts to battle social injustice. Jeffrey Lurie, the owner of the Philadelphia Eagles, said that many owners had moved past their resistance to joining the players in their fight.

“In most of the owners’ hearts and minds, they are really wanting to be proactive,” he said. “It’s a sea change.”

Still, Kaepernick, who is credited with doing the most to highlight the need for action, remains unsigned. He won a multimillion-dollar settlement in 2019 after he accused the league of blackballing him because of his protests.

On Sunday, he let his feelings known on social media, criticizing the N.F.L. because no team had signed his former teammate Eric Reid, who has also knelt for the anthem.