N.F.L. teams went on a running back spending spree over the weekend. The New Orleans Saints and Alvin Kamara agreed on an extension reported to be worth $77.1 million over five years, while the Minnesota Vikings and Dalvin Cook agreed to an extension reported to be worth $63 million, also over five years. Those commitments came after an off-season in which the Carolina Panthers’ all-purpose rusher and receiver Christian McCaffrey, the Tennessee Titans’ playoff hero Derrick Henry and others signed similar multiyear contracts.

All of these players are young, accomplished and talented. And all of their teams are likely to experience almost immediate buyer’s remorse, because most N.F.L. running backs age like an open bottle of cheap zinfandel.

Take Le’Veon Bell, a two-time All-Pro and three-time 1,000-yard rusher from 2014 to 2017. After he sat out the Pittsburgh Steelers’ 2018 season because of a contract dispute, he signed a free-agent deal with the Jets in 2019. The contract was for $52.5 million over four years, even though Coach Adam Gase not so subtly hinted that he would rather spend that money at other positions. Or donate it to charity. Or set it on fire.

Bell averaged 3.2 yards per carry in 2019 and rushed six times for 14 yards in a loss to the Bills on Sunday as part of an ineffective three-man rotation behind an offensive line full of rookies and rain barrels.

Todd Gurley is another example. The Los Angeles Rams rewarded him with a five-year, $60 million extension after he led the N.F.L. in touchdowns and won the Offensive Player in the Year Award in 2017. Nagging injuries began eroding Gurley’s ability soon after. The Rams released him in March and are eating $11 million in cap space this year while Gurley plies his trade for the Atlanta Falcons on a more modest contract. 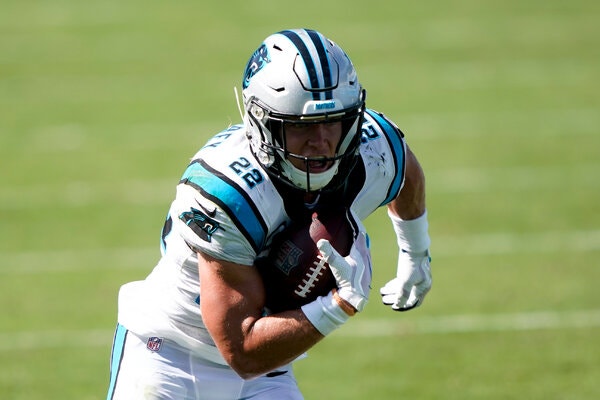 This is all anecdotal evidence, which is appropriate, because that is the only type of evidence N.F.L. decision makers accept. The statistical research about running backs is even more pessimistic, with the analytics community issuing increasingly dire (and sometimes a little histrionic) guidelines for the position every year: Never offer a running back a hefty contract; don’t draft one in the first round; don’t overwork them; don’t run the ball at all; consider grinding them into Soylent Green to feed to more important teammates instead of paying them.

No one really denies that Cook, Kamara and the others are useful players who help their teams win. But the college ranks produce dozens of burly, speedy, determined and affordable rushers in every draft class, while the rigors of plunging into the teeth of N.F.L. defenses quickly wear down all but the rarest backs.

The difference in marginal value between a 26-year-old All-Pro with 1,000 professional carries on his odometer and the typical midround rookie doesn’t come close to the costs: roughly $12 million per year for the veteran, less than $2 million for the rookie.

Furthermore, the rookie is more likely to produce positive results. Of the 15 running backs who rushed for over 1,000 rushing yards last season, 12 of them were on their original rookie contracts and 13 of them were 25 or younger. Ezekiel Elliott of the Dallas Cowboys was last season’s only 1,000-yard rusher who was playing on a contract extension for the team that had drafted him. Thanks to his $90 million eruption of generosity toward Elliott, the Cowboys’ owner, Jerry Jones, is currently searching for loose change in the cushions of his salary-cap sofa so he can afford to hisse quarterback Dak Prescott.

The Jacksonville Jaguars released Leonard Fournette rather than hisse him Cook-Kamara money in late August; he rushed five times for 5 yards for the Tampa Bay Buccaneers on Sunday, while the undrafted Illinois State rookie James Robinson gained 90 yards from scrimmage in Fournette’s place in a Jaguars victory.

General managers and coaches know that running backs rarely hisse dividends on lucrative contracts. Yet they continue to convince themselves that each situation is an exception. Kamara is a key piece of the Saints’ Muhteşem Bowl puzzle, so why not risk mortgaging the future? (Ask the Rams about Gurley.) McCaffrey and Kamara are versatile rushers and receivers, so they will age more gracefully! (So is/was Bell.) As for Cook, well, the Vikings simply enjoy paying retail for name brands.

Some teams also just want to reward successful employees like Kamara and Cook for their hard work. That’s a laudable policy in a league that rarely does anything laudable. Young running backs sell jerseys, spur the fantasy industry, provide thrills and inspire dreams; it’s hard to criticize their big paydays without sounding like a grouchy, myopic bean counter.

It’s just impossible to deny that the box wine is almost indistinguishable from the pricey stuff, and that the money is better spent elsewhere.

Philippines: The challenge to educate the 24,000 children uprooted by the 2017 siege of Marawi