Naomi Osaka had just come back to secure her second United States Open singles title. She had tapped rackets with Victoria Azarenka, thanked the chair umpire and consulted with a WTA Tour media official about the commitments to come.

Only then did she take a moment for herself, returning to the blue court where she became a star in 2018 and gingerly dropping to its surface, lying on her back, hands folded and eyes blinking as she gazed up through the open roof — all alone — for nearly 20 seconds.

“I was thinking about all the times I’ve watched the great players sort of collapse onto the ground and look up into the sky,” she said. “I’ve always wanted to see what they saw.”

Osaka, still just 22, is undoubtedly a great player already, and there was much for her to savor on many levels over the last three weeks. Much to ponder, as well, as she took on not only some of the toughest tennis players in the world but some of the thorniest social issues, as well.

She handled the pressure on both fronts and returned to the fore in women’s tennis with Saturday’s gritty 1-6, 6-3, 6-3 victory. She wore seven masks with different names for each of her matches to honor Black victims of violence. She said it motivated her — “I wanted more people to say more names” — and she walked on court Saturday with a mask bearing the name of Tamir Rice, a 12-year-old uzunluk shot and killed in Cleveland by a white police officer in 2014.

“The point is to make people start talking,” Osaka said at the award ceremony.

Osaka — with her talent and increasingly confident voice — seems to have that effect.

Her time at the top has been short but impactful, and Saturday’s victory came in radically different conditions than her first title run in New York in 2018.

In that final, she defeated Serena Williams in a tumultuous straight-set match that turned ugly when Williams clashed in Arthur Ashe Stadium with chair umpire Carlos Ramos, who called three code-of-conduct violations against Williams.

The crowd, unclear on the rules and upset at the treatment of Williams, booed during the awards ceremony, leaving Osaka in tears shortly after her first Grand Slam singles title.

But Ashe Stadium was nearly empty on Saturday, as it has been throughout this unusual U.S. Open where fans were not permitted because of the coronavirus pandemic.

What little crowd there was in attendance never became a factor, and though Osaka started very slowly against Azarenka, she gradually found her range and became the first player in 26 years to win a U.S. Open women’s singles final after losing the first set.

The last player to manage it was Arantxa Sánchez Vicario, who rallied to defeat Steffi Graf in 1994. 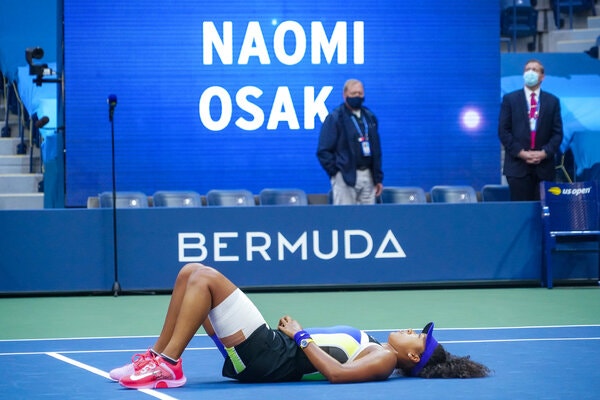 Osaka, 22, who represents Japan and is based in the United States, is 3-0 in Grand Slam singles finals. With her huge serve, powerful groundstrokes and improved fitness, she appeared ready to take command of the women’s game when she won the 2018 U.S. Open and 2019 Australian Open and became No. 1.

But she surprisingly split with her coach Sascha Bajin shortly after that victory in Australia and struggled to recapture the same sparkling form.

Last year, as she defended her U.S. Open title, Osaka was beaten in the fourth round by Belinda Bencic. At the Australian Open in January, she played an error-filled match and was upset in the third round by Coco Gauff, then 15, an American whom Osaka had beaten in straightforward fashion at the 2019 U.S. Open.

Osaka was in evident disarray, but then came the five-month tour hiatus because of the pandemic. Osaka, the biracial daughter of a Haitian father and Japanese mother, became deeply involved in the social justice movement, attending a rally in Minneapolis and speaking out on social networks and elsewhere. She also worked intently on her game and her fitness in her new base in Los Angeles with new coach Wim Fissette, a Belgian who has helped Azarenka and many other leading players win big titles.

“The quarantine definitely gave me a chance to think about a lot of things, what I want to accomplish, what I want people to remember me by,” Osaka said. “I think it definitely helped me out.”

When she returned to the tour for a two-tournament doubleheader in New York, with the players in a controlled environment, she continued her activism. She initially declined to play her semifinal match in the Western & Southern Open the week before the U.S. Open, in solidarity with athletes in professional basketball, baseball and soccer who were protesting systemic racism and police violence.

Tour officials responded by canceling the entire day of play and Osaka went on to reach the final, withdrawing with a left hamstring injury before facing Azarenka.

The hamstring was still strapped on Saturday as she came back to beat Azarenka in the final. 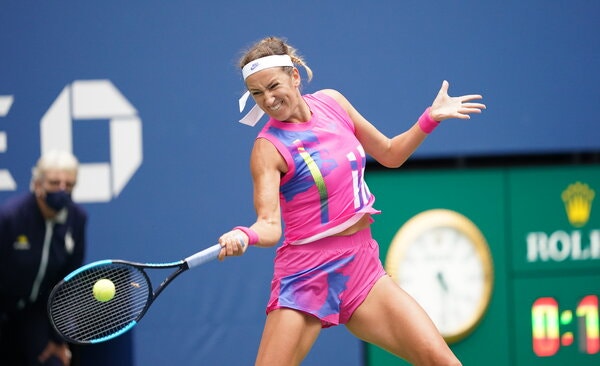 Azarenka, 31, from Belarus, lost to Serena Williams in classic U.S. Open finals in 2012 and 2013 but rallied to defeat the 38-year-old Williams in a ferociously contested semifinal on Thursday and started just as convincingly on Saturday.

Azarenka was unseeded and had not won a tour match in nearly a year before arriving in New York, but she is hardly a tennis outsider. She was No. 1 for 51 weeks in 2012 and 2013 and won two Australian Open singles titles before Williams reasserted herself at the top of the women’s game, and Azarenka dropped back.

She had injuries, painful breakups with boyfriends and coaches and, most traumatically, a lengthy and bitter custody dispute over her now 3-year-old son, Leo, who stayed with Azarenka and her mother and team at a private home she rented near the U.S.T.A. Billie Jean King National Tennis Center for the tournament.

She would have been the first mother to become a Grand Slam singles champion since Kim Clijsters won the Australian Open in 2011. As Azarenka dominated the opening set, hitting nearly every first serve in play and controlling the rallies, it appeared she might win in a hurry. Osaka threw her racket at one stage in frustration as her unforced errors piled up.

“I just thought it would be very embarrassing to lose this in under an hour,” Osaka said, explaining that she told herself to “stop having a really bad attitude.”

Her mood and game improved dramatically as the final progressed, while Azarenka failed to sustain her level of play. After losing the second set and falling behind 1-4 in the third, Azarenka made one more surge, battling through a five-deuce game to hold serve and then breaking Osaka’s serve in the next game to close the gap to 3-4.

But at 30- 15 on Azarenka’s serve in the next game, the match turned for good as Azarenka started hitting shots that failed to penetrate. Osaka won a high-velocity rally to get a break point and then converted it as Azarenka lined up a forehand, went for an inside-out winner and missed just wide. By such tiny margins are Grand Slam titles lost and won.

Osaka then closed out the victory by holding serve as Azarenka’s last shot, a backhand, struck the net to end a 13-shot rally. Osaka tapped rackets with Azarenka at the net — another sign of these changed times — and then lay on her back.

“I always see everyone sort of collapse after match point, but I always think you may injure yourself, so I wanted to do it safely,” she explained.

That seemed fitting at a tournament where staying safe was the priority, as players were tested for the virus regularly and restricted to their lodging and the tournament site.

“It’s not easy times in the world right now,” Azarenka said, holding back tears in her post-match speech in the near-empty stadium. “So I’m very grateful for the opportunity to play in front of millions of people watching on TV, unfortunately not here.”

Osaka will rise to No. 3 in the rankings on Monday but said she is not certain whether she will play the French Open, which begins in two weeks in Paris on red clay, a surface on which she has struggled to match her results on hardcourts.

She has quickly become one of the biggest stars in international sports and was the highest paid female athlete over the last year, supplanting Williams on the Forbes list with earnings estimated at $37.4 million.

She and her parents followed the Williams family template as they developed her big serve and power baseline game. As with her role model, she is all but impossible to resist when it is all clicking. She had shaky moments in New York: requiring three sets in four of her seven matches, including a taxing and gripping semifinal victory over American Jennifer Brady.

But Osaka, with help from Fissette, managed to block out the static and produce her most convincing tennis when she needed it most: boldly finding the lines with her serves and running groundstrokes at the critical junctures.

A champion again, she made her point unmistakably on the court and off. The sky, which she gazed at so peacefully on Saturday, is the limit.