BERLIN — Aleksei A. Navalny, the Russian opposition leader who is recovering in Berlin after being poisoned, posted a photograph on Tuesday showing him in the hospital, looking gaunt but very much alive, and telling followers that he was breathing on his own.

“Hello, it’s Navalny,” he said in an Instagram post with a picture of himself sitting up in a hospital bed surrounded by his wife and other relatives. “I can still do almost nothing, but yesterday I could breathe the entire day by myself,” he added.

“I recommend it,” he said with characteristic irony.

The message came hours after a senior German security official told The New York Times that Mr. Navalny was awake, alert and had told German judiciary officials that he was refusing to cooperate with a Russian inquiry into his case. He also vowed, according to the official, to return to Russia as soon as possible to continue his work.

“It’s strange to me that anyone could think otherwise,” Ms. Yarmysh said on Twitter. “No other options are being considered.”

Mr. Navalny’s return to health, as well as to social media, has the potential to re-energize Russia’s opposition after nearly a month of uncertainty since he first fell ill on Aug. 20.

The most persistent critic of President Vladimir V. Putin, Mr. Navalny collapsed on a flight to Moscow after spending several days meeting with opposition candidates in Novosibirsk, a Siberian industrial hub that is Russia’s third-largest city. His plane made an emergency landing in Omsk, another Siberian city, where he was first hospitalized. He was flown to Berlin two days later.

Mr. Navalny had been campaigning in Siberia before the nationwide municipal elections that took place Sunday. He and his allies made enough gains to cost Mr. Putin’s party, United Russia, its majority on the City Council in Novosibirsk.

Senior Russian officials, largely silent in the aftermath of the poisoning, appeared in public on Tuesday to discuss the case. Dmitry Peskov, the Kremlin’s spokesman, held a news conference, as did Sergei Naryshkin, the head of Russia’s foreign intelligence service.

Both men denounced accusations of Russian involvement and insinuated, without evidence, that Germany was somehow implicated in the poisoning. 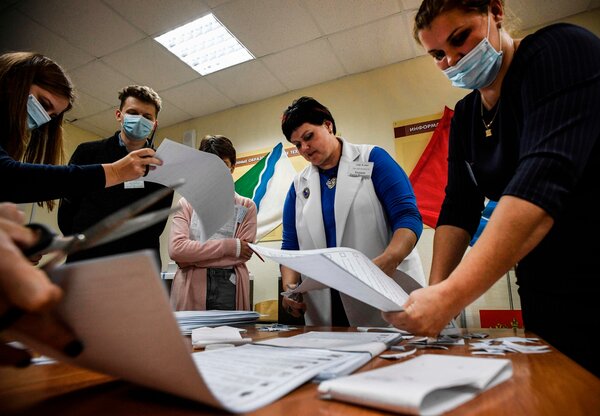 With the opposition leader seemingly out of danger, attention is likely to shift to the Western response to Russia. German officials now say they have almost no doubt that the Russian state was behind the poisoning of Mr. Navalny.

The German government said on Monday that laboratories in France and Sweden had confirmed that the substance used to poison Mr. Navalny was a form of the nerve agent Novichok.

The results match Berlin’s own findings and provide additional confidence of state involvement, as Western intelligence agencies have assessed that only the Russian government was likely to have access to such a weapon.

German officials and others have said that any use of the nerve agent would violate the Chemical Weapons Convention, to which Russia is a signatory.

Leonid Volkov, Mr. Navalny’s chief of staff, who is in Berlin, said that Mr. Navalny’s team was talking to German officials about the government’s response to Russia and that they welcomed the clarity with which German and other European officials had condemned the poisoning.

“The E.U. has taken a strong, a harsh position,” Mr. Volkov said. “They are using unusual wording in this case, which is a good sign that they might be prepared to go a step further.”

But even as patience with Mr. Putin is running thin, Berlin is struggling to determine how exactly to respond. Some have suggested canceling the Nord Stream 2 pipeline, an $11 billion project to carry natural gas from Russia to Germany that is nearing completion.

So far, however, the German government, its European allies and the United States have not taken any action other than raising the prospect of imposing additional sanctions on Russia.

Russian officials have largely pleaded ignorant, despite posing a number of alternative theories about Mr. Navalny’s condition like a drug overdose and low blood sugar. Some have even insinuated that Germany was to blame.

“The fact is, at the moment Aleksei Navalny left Russian territory, he had no toxic, poisonous substances in his body,” Mr. Naryshkin, the head of Russia’s foreign intelligence service, said in a rare news conference on Tuesday. “In connection with this, we have a number of questions for the Germans.”

Mr. Naryshkin added that Russia had destroyed its entire supply of Novichok-class chemical weapons in accordance with the Chemical Weapons Convention. That statement contradicted the assessment of Western intelligence agencies, but it did provide a rare official acknowledgment that Russia had, at least at one point, possessed such weapons.

In remarks to journalists on Tuesday, Mr. Peskov, the Kremlin spokesman, said that Russia remained open to cooperation in any investigation of the poisoning, insisting that Germany share any information it had collected.

“We are simply stating in this situation our deep lack of understanding of what occurred and confirm our readiness and our intention to to find out what happened,” Mr. Peskov said, according to the Tass news agency. He added that Mr. Navalny, like any other Russian citizen, was free to return to Russia when he pleased, but ruled out any meetings with government officials. 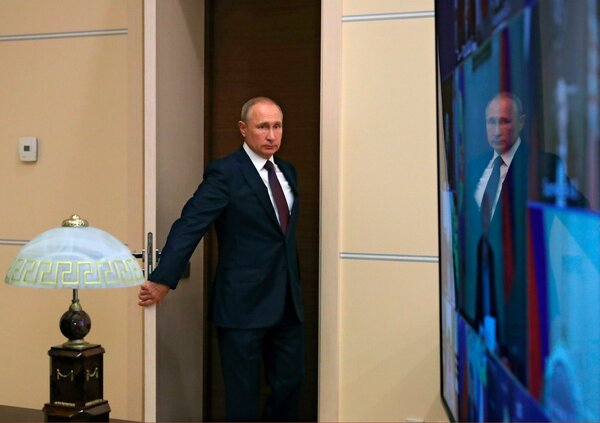 Moscow even filed an official request for mutual assistance in Germany, seeking biological samples and other medical information related to the poisoning. As a formality, a Berlin judiciary official met briefly with Mr. Navalny on Monday to ask whether he would agree to the Russian request for medical information. Mr. Navalny rejected the request, declining to cooperate with any Russian inquiry, said Mr. Volkov, his chief of staff.

The German authorities have dismissed Russia’s demand for more information.

The senior German security official, who spoke on condition on anonymity to speak candidly about interactions with the Russian government, said the German government had “rejected” Russia’s argument that Germany should provide more information about the case.

Russia, the official said, had collected more evidence than anyone, including from the Siberian airport where Mr. Navalny might have been poisoned and at the Russian hospital where he was first treated.

Katrin Bennhold reported from Berlin, and Michael Schwirtz from London.

European shares pull back ahead of ECB meeting