LAKE BUENA VISTA, Fla. — Ciaran Wolohan was watching the Denver Nuggets play on television a couple of years ago when he saw an enormous man with gangly arms grab a defensive rebound, spin around and uncork an 85-foot pass to a teammate for a fast-break layup, all in one fluid motion.

Wolohan, who coaches men’s and women’s water polo at Wagner College on Staten Island, was taken aback. He hopped onto the internet.

“I had to look up who he was, because he was this big, unfit-looking guy,” Wolohan said. “But it was just this amazing, full-field pass, and I was like: perfect water polo technique.”

The player was Nikola Jokic, and Wolohan was not surprised to learn that Jokic was from Serbia, a water polo hotbed.

“He’s been around water polo,” Wolohan said. “You can tell for mühlet.”

Jokic, a 7-foot, 284-pound center, might just be the water polo world’s favorite basketball player. He passes like a water polo player, treats the tactics of basketball like one and even resembles one, with his shipping-crate frame.

“It’s a big man’s sport,” said Sean Tierney, 47, who plays for the Denver Water Polo Club. “There’s a lot of physical contact — a lot of bellying up.”

On Sunday, Jokic did everything for the Nuggets but put them over the top in a 105-103 loss to the Los Angeles Lakers in Game 2 of the N.B.A.’s Western Conference finals. He had 30 points, 9 assists, 6 rebounds and 4 steals, and he scored the Nuggets’ final 12 points before Anthony Davis beat the buzzer with a game-winning 3-pointer for the Lakers.

Denver trails in the best-of-seven series, two games to none, ahead of Game 3 on Tuesday.

“We need to fight,” said Jokic, an All-N.B.A. second-team selection. “That’s our only chance.”

Jokic didn’t play water polo formally — he was never on a team, he said — but he would strip to his swim trunks and toss the ball around with his friends when he was growing up in Sombor, a small town about 100 miles northwest of Belgrade.

That did not make him unique. Serbia has a deep passion for water polo. There are water polo pools in nearly every city. Young people will drag goals to the lake on weekends. The Serbian men’s national team, a fixture on the Olympic medal podium, won gold in 2016.

Basketball has gained ground in recent years, thanks to the exploits of N.B.A. players like Jokic, Bogdan Bogdanovic of the Sacramento Kings and Boban Marjanovic of the Dallas Mavericks. Dimitrov, who grew up in Novi Sad, Serbia’s second-largest city, said he would put all three of them on a billboard alongside the tennis champion Novak Djokovic as the country’s biggest sports stars of the moment.

But water polo is a part of the cultural fabric, and Jokic did not specialize in basketball until he was teenager. He dabbled in many sports when he was young, and that likely helped him develop his dexterity, said Ognjen Stojakovic, the Nuggets’ director of player development.

“He’s actually very good in volleyball,” said Stojakovic, who is also Serbian. “You should see him. All the sports with the ball, he’s unbelievable. Especially Spikeball.”

Spikeball is a game in which players smack a small ball off a round, horizontal net, and the Nuggets apparently moonlight as Spikeball aficionados.

“You would think he’s M.V.P. of Spikeball,” Stojakovic said of Jokic.

At the same time, Jokic’s proclivity for palming the basketball is one of the sharpest parallels that water polo practitioners draw when they watch him on the court. One-handed passes. One-handed rebounds. One-handed floaters. One-handed dribble handoffs. Jokic also has the habit of holding — and sometimes waving — the ball above and behind his head with one arm as he fends off his defender with the other. He might as well be treading water while he does it.

In water polo, no one besides the goalie is allowed to use two hands on the ball. It is the rough equivalent of a double dribble.

Manucher Ghaffari, 64, the founder and head coach of Rocky Mountain Neptunes Water Polo Club, a youth club based in Boulder, Colo., noted other similarities between the two sports: press and zone defenses, counter attacks that are like fast breaks, the vital role that the center plays and the importance of passing.

“But to be able to make such accurate passes with one hand, that’s unusual,” Ghaffari said. “Not many basketball players can do that.”

The court-length passes stand out to Brian Clark, 59, who also plays for the Denver Water Polo Club. Most basketball players do a big windup with a motion that includes a step forward with the opposite leg and a huge follow through the throwing arm. Not Jokic, whose lower half remains still as he whips the ball, his hips and core generating all his power.

“He’s standing there, he’s got his chest up and he’s got his arm straight back,” Clark said, “and then just does a boom! And that absolutely is a water polo move.”

“It’s irritating when he does it and the announcers are like, ‘What an incredible baseball pass,’” Clark said. “It’s not a baseball pass!” 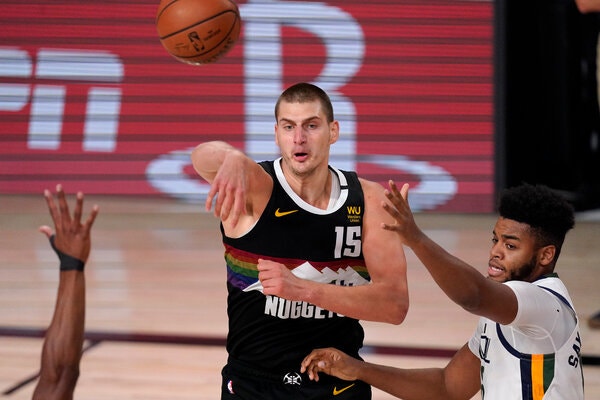 More generally, there is Jokic’s approach to the game and what Dimitrov, the coach at St. Francis, described as his countryman’s “water polo mind.”

Patience is a virtue in water polo. Games tend to be low scoring — Serbia won the men’s Water Polo World League championship last year by edging Croatia, 12-11 — and players carefully pass in search of the most high-percentage shots. Those passes need to be spot on when everyone is chest-deep in water.

“It seems like every time Nikola throws the ball, he notices that one small step of advantage that his teammate has over a defender,” Dimitrov said, “and then he puts the ball in that pocket to create an opportunity for an easy layup.”

Jokic is the rare player who seems capable of bending games to his preferred tempo: methodical bordering on painstaking. He has joked that he does not have much of a choice.

“I’m patient because I cannot really run fast,” he said.

But even in the half-court, Dimitrov said, Jokic often takes his time. He surveys the situation and plots when to strike.

“When you take a closer look, he has a completely different game than any other player,” Dimitrov said. “No one has the same build or the same moves.”

Tierney recalled playing against Serbian teams when he was younger and how some of the players were notorious for their pre-match routines.

“You’d see a guy sitting on the side, having a cigarette before he’d jump in the pool,” Tierney said.

And then the game would start, and the Serbians would impose their will. “It was unbelievably intimidating,” Tierney said.

There is something about Jokic that is similarly deceptive: No one is mistaking him for Mr. Olympia. The Wall Street Journal evvel described him as a “penguin on stilts.” His many fans are familiar with the semi-apocryphal stories about his emergence as a basketball prodigy.

“Other players were like, ‘Has he ever lifted anything heavier than a spoon in his life?’” Dimitrov said. “But he would do these amazing things.”

With the ball in his possession, Jokic is a magician. He just wears sneakers instead of a Speedo.