SEOUL, South Korea — A South Korean government official apparently trying to defect to North Korea was shot and killed by troops in the North who set his body on fire for fear he might be carrying the coronavirus, South Korean officials said on Thursday.

South Korea’s Defense Ministry called the killing a stunning and “atrocious” act and demanded that the North punish those responsible.

With all official channels for inter-Korean dialogue cut off since June, the South had few options to force an apology or an explanation from North Korea. The violent episode threatened to further derail diplomatic ties between the two countries by undermining South Koreans’ support for their government’s recent efforts to improve relations with the North through humanitarian aid.

The name of the South Korean fisheries official, 47, was not made public. But he was a first mate on a government ship​ monitoring fishing boats ​six miles south of a disputed western sea border ​with North Korea early Monday. He went missing after excusing himself from the pilothouse and going outside. Later, his colleagues found his shoes at the stern of the ship.

South Korean Navy and Coast Guard ships and planes began an extensive search for the man but could not find him before he drifted into North Korean waters. A North Korean fishing patrol boat found the man wearing a life jacket and clinging to a floatable device on Tuesday afternoon, South Korean officials said.

Hours later, a North Korean Navy ship approached the man and opened fire under orders from higher-ups, although it was clear he was trying to defect, officials in the South said. North Korean soldiers wearing gas masks and other protective gear then poured oil on his body and set it on fire, they said.

On Thursday, the South’s Defense Ministry said that it had “confirmed from the analysis of various intelligence that the North shot our citizen found in its waters and cremated his body.” South Korea said that it was investigating why the official had tried to defect.

“Our military strongly condemns this atrocious act and strongly urges the North to explain its deed to us and punish those responsible,” said Lt. Gen. Ahn Young-ho, a top official at the South Korean military’s office of the Joint Chiefs of staff. 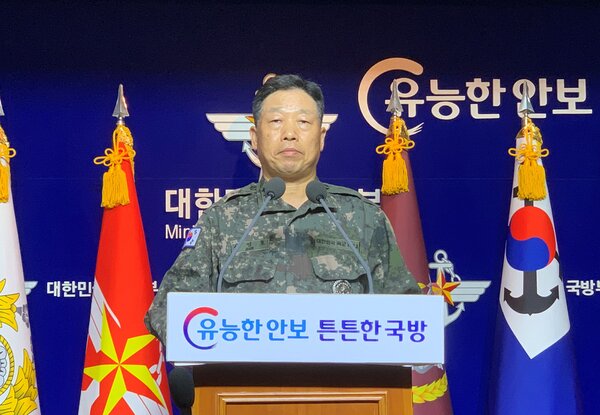 North Korea has yet to comment on the shooting. If confirmed by the North, it would mark the first time ​that North Korea has killed a South Korean citizen in its territory since 2008, when its soldiers shot and killed a tourist who had strayed off a jointly run tourist complex in the southeast corner of North Korea.

Tensions ​over th​e 2008 killing, as well as the North’s nuclear weapons program, led the South to withdraw from the joint Kumgang Mountain tourism project​ later that year​.

In the past, when North Korea has found fishermen or defectors from ​the ​South in its territories, it has usually detained them alive and sometimes returned them.

The killing of the South Korean official comes at a sensitive time in inter-Korean relations. In his online speech at the United Nations General Assembly on Tuesday​, President Moon Jae-in ​of South ​Korea reiterated his call for dialogue and peace on the Korean Peninsula​.

Mr. Moon also appealed for international support as he revived his diplomatic efforts to persuade North Korea and the United States to sign a political declaration ​ending the 1950-53 Korean War​ as a first step toward a permanent peace and denuclearization on the peninsula. The peninsula is technically still in a state of war​ because the conflict was halted ​only by a truce​.

In June, the North blew up a jointly run liaison office in an angry outburst against the South. In July, North Korea locked down ​its Kaesong City near its border with South Korea after a ​​North Korean man who had defected to the South three years ago ​swam across the western border to return to the city.

The North’s leader, Kim Jong-un, declared a “maximum” national emergency for fear the man may “have been infected with the vicious virus​.”​ But South Korean officials have said there is no proof the man carried the coronavirus.

North Korea said at the time that it was investigating a military unit for failing to stop the runaway at the inter-Korean border, and that it planned to “administer a severe punishment and take necessary measures.”

South Korean officials suspect that the North’s violent act against the South Korean official this week was compelled by its fear of the coronavirus. ​ Such fear has driven ​North Korea ​to keep its borders shut since January. This month, Gen. Robert B. Abrams, commander of the United States military in South Korea, said the North had deployed crack troops along its border ​with China ​with “shoot-to-kill​”​ order​s​ to prevent smugglers from bringing ​in ​the coronavirus​.

North Korea has insisted that it has no confirmed Covid-19 cases in its territory. But outside experts have voiced skepticism ​and warned that an outbreak could prove disastrous in the North, given its decrepit public health capacities and​ its chronically malnourished population.