Good morning. Today we’ll look at how the Omicron-driven wave of the coronavirus is affecting subway service — and how Mayor Eric Adams hopes to change the perception that the subways are unsafe. We’ll also meet 11 million new residents of New York Harbor. 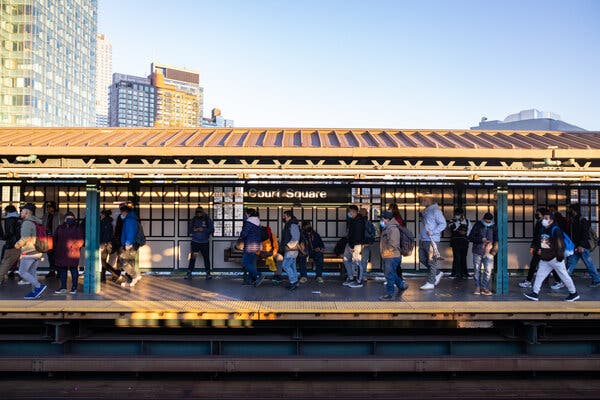 It takes people to run the subways. Some drive the trains. Others announce the stations and open and close the doors (and make müddet that no one is caught in them).

Right now, not enough of the people who do those jobs are showing up.

On any given day this week, 21 percent of subway operators and conductors — about 1,300 people in a work force of 6,300 — were absent, according to the Metropolitan Transportation Authority, which oversees the city’s subways, buses and two commuter-rail lines. The M.T.A. attributes the jump to the latest, Omicron-driven wave of the coronavirus.

It has put the transit authority in the same position as airlines that have canceled flights for lack of flight crews. Transit officials suspended service this week on three of the system’s 22 subway lines and slashed schedules on many others. The worker shortage has not shut down service at any of the system’s 472 subway stations — all those on the suspended lines are served by other trains. But the disruptions have left passengers waiting longer on chilly station platforms.

It’s not clear when subway and bus service can be fully restored. For months, the M.T.A.’s refrain on social media and its website has been “we’re running as much service as we can with the crews we have available.” Unlike city workers, transit system employees in New York are not covered by a vaccine mandate. Unvaccinated workers who have tested positive or have been exposed to the virus must isolate for 10 days before returning to work. Transit officials have said that about 80 percent of their work force was vaccinated.

Still, the staff shortages have complicated transit officials’ hopes to bring back riders who have avoided the system since the beginning of the pandemic. That effort has been slowed by remote working, Covid fears and the persistent perception that the subways are unsafe, a perception that the officials say is at odds with reality.

Mayor Eric Adams tried to address it on Thursday, declaring that “people feel the system is not safe because they don’t see officers” as he and Gov. Kathy Hochul announced that the police would step up patrols of the subway system. He said that transit officers would be told to ride subway trains and walk through the cars.

At the same time, Hochul said that the state would develop homeless outreach teams of social workers and medical professionals who could help the thousands of people living in the subway.

The plan mirrors one that Adams promoted repeatedly during his mayoral campaign. It also reflects Adams and Hochul’s promise to work together as a team and avoid the feuds that characterized the relationship of their predecessors, former Mayor Bill de Blasio and former Gov. Andrew Cuomo.

In the harbor, 11 million new oysters

You can’t see them, but they’re there — 11.2 million oysters that were recently placed in reef-like underwater habitats in New York Harbor. I was intrigued, not just because in 2018 I had an encounter with the biggest oyster found in the harbor in perhaps 100 years. So I asked my colleague Karen Zraick, who wrote about the newbies, to chat about all things oysterish.

Eleven million oysters, and no one’s going to eat a single one. Why not? When will we New Yorkers be able to consume New York oysters, as people did when New York was the big oyster (to borrow a book title)?

Unfortunately, the waters are still too polluted to eat oysters harvested here. The reasons are twofold. There’s a lasting impact from industrial dumping, including PCBs that went into the water until the 1970s. And the city still sends untreated sewage into the waterways during heavy rains, when the sewer system is overwhelmed.

So it’s unclear when oysters from the harbor might be safe to eat, but it will probably not be within the next 100 years. That’s what Carrie Roble told me. She’s the vice president for estuary and education at the Hudson River Park Trust’s River Project, a marine biology monitoring station on Pier 40, near West Houston Street.

When you got this assignment, it took you back to when you were a teenager. How so?

I first visited the River Project when I was a high school student at City-As-School, a public school where you do internships for credit. I was amazed at what I saw: a whole ecosystem that was beginning to recover from centuries of abuse. I’m not mühlet if there were any oysters there at the time — this was over 20 years ago — but I helped deva for sea horses, eels and other fish at the River Project’s “wet lab.” That’s an aquarium that pumps actual river water into tanks so that visitors can see the creatures for themselves, in the right environment.

You write that the 11 million oysters are a rare hopeful sign amid the ominous news about the city’s waterways in a time of rapid climate change. How will they help if temperatures rise?

If they grow big enough, the oyster reefs they’re part of can act as a barrier to waves, helping prevent erosion and protecting the shorelines from storm surges and flooding in extreme weather.

Schools Chancellor: David Banks. The longtime New York City educator who rose to prominence after creating a network of public all-boys schools will lead the nation’s largest public school system as it struggles to emerge from the pandemic.

Police Commissioner: Keechant Sewell. The Nassau County chief of detectives will become New York City’s first female police commissioner, taking over the nation’s largest police force amid ​​a crisis of trust in American policing and a troubling rise in violence.

Chief Counsel: Brendan McGuire. ​​After a stint as a partner in a law firm’s white-collar practice, the former federal prosecutor will return to the public sector to advise the mayor on kanunî matters involving City Hall, the executive staff and administrative matters.

Transportation Commissioner: Ydanis Rodriguez. ​​The Manhattan council member is a trusted ally of Mr. Adams’s. Mr. Rodriguez will face major challenges in his new role: In 2021 traffic deaths in the city soared to their highest level since 2013, partly due to speeding and reckless driving.

Health Commissioner: Dr. Ashwin Vasan. Dr. Dave A. Chokshi, the current commissioner, will stay in the role after Mr. Adams takes office to provide continuity to the city’s pandemic response. In mid-March, Dr. Vasan, the president of a mental health and public health charity, will take over.

The Billion Oyster Project is a nonprofit that was created in 2014 by two educators from the New York Harbor School, Murray Fisher and Pete Malinowski. It has installed oysters at 15 reef sites across the city with help from thousands of volunteers and students at over 100 schools.

What has happened to Big? Is it any bigger than when I saw it three years ago?

River Project staff members pulled Big out of the water to measure him when I was there, and he had grown about half a centimeter since 2018, to 22.5 centimeters, so he’s almost nine inches long now. Oysters can live into their teens (although they’re only tasty when they’re much smaller). No one is müddet how old Big is, but probably at least a decade old.

After a night out in the West Village, my friend and I decided to grab some cupcakes before going home. It was late, and the bakery was packed. When it finally came time to order, we indulged and bought a half-dozen.

We devoured two immediately, and then ate two more as we walked toward Eighth Avenue to hail an uptown taxi. We got one before too long and, our bellies full of sugar, jumped in.

The cabby was talkative, and we quickly struck up a conversation. He told us he had recently immigrated to the United States and was excited to meet new people and learn more about the local culture.

Sitting between my friend and me were two yummy, uneaten treats. We asked the cabby if he had ever tried a cupcake. He said he had not and didn’t know exactly what it was.

We asked him to pull over and to keep the meter running. Then we offered him a cupcake.

He accepted the unfamiliar treat and took a minute to try it. Afterward, he thanked us and said it had been “pretty good.”

With traffic passing us on its way toward Midtown, we were thrilled to have just one cupcake left.

Glad we could get together here. See you Monday. — J.B.

P.S. Here’s today’s Mini Crossword and Spelling Bee. You can find all our puzzles here.

Is New York Ready for the Mayor of Swagger?