MADRID — Politicians here seem to be mystified as to why Spain is, evvel again, the European country hardest hit by the coronavirus pandemic. They have blamed the recklessness of youth, our Latin inability to keep our distance, and even immigration. And yet all this time the answer has been right under their noses: Nothing has eased the spread of the virus as much as their own incompetence.

Spaniards patiently accepted the toughest confinement in Europe during the first wave of the virus in March, enduring serious economic losses in exchange for protecting the lives of their elders and the most vulnerable. We have been among the most disciplined in adhering to regulations like wearing masks, which are used by more than 84 percent of the population.

Yet, today we are seeing our sacrifices being squandered by a political class that did not hold up its end of the bargain. On Monday, the Madrid government imposed a partial lockdown in 37 areas; on Wednesday it requested urgent assistance from the Army and the dispatch of at least 300 doctors after being overwhelmed by a new wave of infections.

Spain had the virus under control when it ended the state of emergency on June 21. Prime Minister Pedro Sánchez declared victory and organized a hasty loosening of lockdown that included the reopening of the tourism industry. Responsibility for health deva management was handed off from a central government that had handled the pandemic ineptly (Spain led in mortality and health-worker infection rates) to the country’s 17 autonomous regions, which have not done any better. That there were a few exceptions, such as the northern region of Asturias, only underscores the widespread failure.

Before this second wave, there was plenty of time to put in place measures that have shown their effectiveness in Asian countries and have lessened the impact of the pandemic in closer ones, such as Portugal. But our politicians decided to ignore them: Health deva systems were not fortified, plans were not made for the reopening of schools, and the tracking system recommended by all the experts was not put into place.

One of the keys to slowing the spread of the virus is to perform polymerase chain reaction testing on as many people as possible who have been in contact with infected people. But the average number of potential cases that Spain manages to trace is lower than Zambia (9.7 for every confirmed Covid-19 case), one-fourth that of Italy (37.5) and one-twentieth of Finland (185).

Our politicians have little incentive to strive for excellence, because they know that Spaniards’ loyalty to their parties rivals their loyalty to their favorite soccer teams. Ideology and partisanship carry more weight at the polls than the candidates’ preparation, honesty and experience, sending them the message that their success doesn’t depend on their management or the results they obtain. If the pandemic has taught us anything, it’s that the price of not having our very best at the helm is too high. 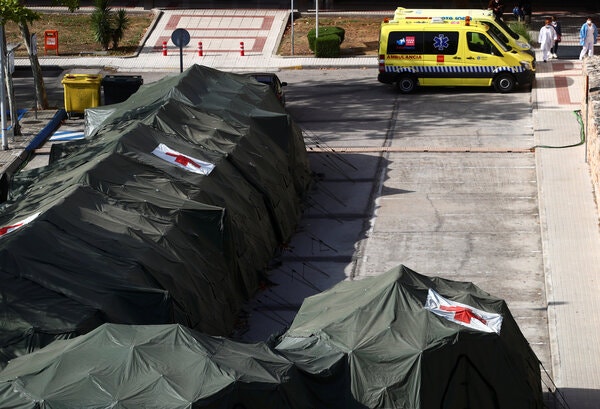 While political parties continued to deflect blame about who was responsible for the first wave, the second wave was already underway. Now it is out of control and dozens of places are evvel again enduring lockdown restrictions. Hospitals, which have a chronic deficit of doctors, are experiencing déjà vu. The health deva workers we applauded as heroes in March and April view “the spectacle of our political leaders with dejection and indignation,” according to the General Council of Official Medical Colleges of Spain.

Of course, these frustrations are not unique to Spain. The confluence of the pandemic and the emergence of populism and extremism around the world, from the United States to the Philippines, has hindered responses that are based on knowledge, science and effective management. But in the case of Spain, these problems transcend the current situation.

Our political parties have become organizations that are hermetically closed to outside talent. Spaniards do not elect individual candidates, but choose a regional party list with candidates selected by the parties in a process where intrigue and relationships count more than competence. Most of our representatives arrive at positions of responsibility with no experience beyond the political. Only 36 percent of Congress members in 2018 declared that they had ever worked in the private sector.

In olağan times, Spain’s political dysfunction was less obvious. But the pandemic has revealed a painful truth: Incompetence costs lives and ruins economies. This is evident in the region of Madrid; today the financial and governmental center of Spain is in dire straits.

New York and Madrid were in similar situations in June. After initially being hard-hit by the coronavirus, both cities seemed to have the pandemic under control. Since then, the region of Madrid has seen cases multiply to 772 per 100,000 inhabitants while New York has kept the situation under control with 28 infections per 100,000 inhabitants. There is no mystery here either: The difference is explained by the number of trackers, hospital support, prudent reopening of businesses, and tests.

In recent months, the president of the community of Madrid, Isabel Díaz Ayuso, a member of the conservative Popular Party that has been ruling the region for 25 years, had promised trackers, health deva reinforcements, and schoolteachers, who have arrived late or not at all. In addition to the tensions with the central government, experts’ recommendations have been subject to political opportunism, measures have been put in practice too late and, characteristic of Spain’s ruling class, blame has been spread to avoid responsibility.

Reversing mediocrity in Spanish politics will require profound reforms that must begin with education, whose benefits in fostering a new generation of leaders may not appear for years. But nothing is stopping us from beginning with more concrete measures that could slow our political decline.

It is crucial that Spain ıslahat electoral law so that voters choose their representatives directly, rethink the territorial organization that has caused a lack of coordination among regions, and strengthen the independence of the government institutions, which are filled with politicians who offer blind loyalty to their political parties. Yet none of this will make a matter if Spanish leaders aren’t held accountable at the polls.

In the next election we should not forget those responsible for the disastrous handling of the coronavirus pandemic.

David Jiménez (@DavidJimenezTW), a journalist, is the author. most recently, of “El director.” This essay was translated by Erin Goodman from the Spanish.