The developers behind Industry City, a major commercial project in Brooklyn that aimed to create 20,000 jobs, have abandoned their rezoning proposal for the neighborhood, overcome by a swell of opposition from the progressive left.

The fight over Industry City was the biggest clash over development in New York City since the collapse of the Amazon deal in Queens last year, and the proposal’s defeat reflects the growing strength of progressive Democrats.

The rezoning application had been cast as a way to bring jobs to an underdeveloped waterfront industrial area, and the city’s massive job losses during the pandemic gave supporters of the rezoning a compelling argument that the city could not spurn the prospect of new jobs.

But the developers decided to withdraw the application on Tuesday night after more elected officials came out against the plan.

“If a project like this can’t succeed, it concerns me very much about the future of New York City — a place I’ve spent my whole life,” the chief executive of Industry City, Andrew Kimball, said in an interview on Wednesday. 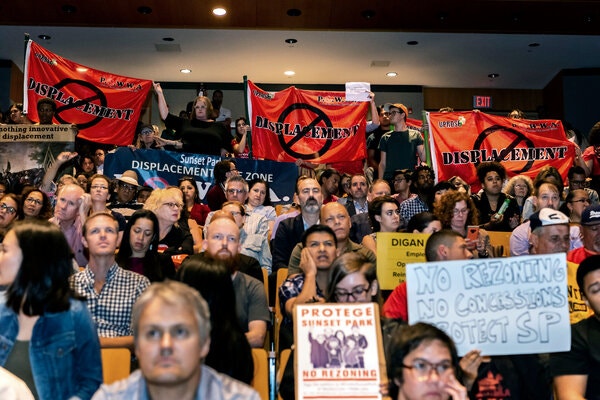 Business leaders also expressed dismay over the defeat of the rezoning, which was first reported by Politico. Kathryn Wylde, the president of the Partnership for New York City, an influential business group, questioned how elected officials could forsake thousands of jobs when nearly one million New Yorkers were facing unemployment.

“The opponents of Industry City have further damaged the prospects for economic recovery from COVID-19,” she said in a statement.

But progressive Democrats saw the proposal as a favor to big business, one that would worsen gentrification in Sunset Park, a diverse, working-class neighborhood on the Brooklyn waterfront.

“People power has triumphed,” Carlos Menchaca, the local councilman who opposed the deal, wrote on Twitter. “Our work continues as community voice drives the growth and future of our neighborhood.”

Mayor Bill de Blasio, a Democrat who will leave office in 2021, had declined to take a position on Industry City. Mr. de Blasio, who supported the Amazon deal, said on Wednesday that other rezoning proposals were moving forward and he would support ones that benefit the public.

Previous mayoral administrations had approved “sweetheart deals” for developers that he said made New Yorkers skeptical of new projects.

Industry City is an industrial complex on the waterfront that was built in the 1890s. Developers have rebranded it as a 21st-century hub for small businesses and artists and have wanted to expand the site into a shopping and office behemoth.

In 2013, Jamestown, the developer that owns Chelsea Market, and its partners bought a nearly 50 percent stake in the 16-building complex. Jamestown renovated the buildings, which were flooded during Hurricane Sandy.

The proposal to rezone the area was stridently opposed by a handful of community groups, most notably Uprose, an environmental justice group, and Protect Sunset Park. The grass-roots opposition helped win over local elected officials, including Representatives Jerrold Nadler and Hakeem Jeffries, who sent a letter to the City Council on Tuesday opposing the rezoning and urging council members to listen to local residents.

“What the Sunset Park community has made clear is rezoning such a large portion of the waterfront for a single private actor is not in the best interests of the residents,” the letter said.

Mr. Kimball, the leader of Industry City, said he had worked to address the same concerns that had killed the Amazon deal and abided by the city’s complex land review process. Still, there was resistance to “a project that any reasonable person would say is an extraordinary project.”

Two factors contributed to the decision to withdraw the application, he said: the lack of political leadership and fears that a contentious battle could harm the developers’ reputation. The developers have leased 300,000 feet of commercial space at Industry City since the pandemic hit.

“We can’t have that be damaged by a continued political food fight that lacks very little substance,” Mr. Kimball said.

Eric Ulrich, a Republican councilman from Queens, said he had the same pit in his stomach upon hearing of Industry City’s defeat that he did when Amazon abandoned its plans in Queens. The city was suffering, he said, because Democrats were “marching to the beat of the Socialist drum.”

“We are sending such a terrible message to the rest of the country that we’re not open for business, and we’re not open to economic development and new jobs,” he said.