RIO DE JANEIRO — Sightings of the isolated tribes that Rieli Franciscato devoted his career to protecting are rare and fraught with danger.

So in June, when a handful of unclothed Indigenous people emerged from the forest in Rondônia state and approached a small hamlet, Mr. Franciscato, a Brazilian government official specializing in uncontacted tribes, sprang into action.

His frantic efforts the last few months to keep Rondônia’s isolated tribes safe, and to try to figure out why they had begun to venture out of the Amazon rainforest, ended on Wednesday when Mr. Franciscato was struck in the chest with an arrow and killed.

Colleagues and police investigators believe a member of an uncontacted tribe shot at Mr. Franciscato, 56, mistakenly perceiving him as a threat.

Moises Assaup Kampe, 35, a friend of Mr. Franciscato who was with him that day, said they had been retracing the footsteps of the tribesmen in the rainforest, following the most recent sighting by villagers in a rural area near the town of Seringueiras.

“We were looking for information about where they had come from and trying to see if they had left anything behind,” Mr. Kampe said.

Suddenly, Mr. Franciscato yelped. Mr. Kampe watched in horror as his friend yanked out the tip of a five-foot bamboo arrow that had pierced his chest.

“He pulled it out and began running,” Mr. Kampe said. “He ran about 50 meters, passed out and dropped to the ground.”

Brazil’s Amazon rainforest is home to dozens of Indigenous tribes that have chosen to remain in isolation. Since the 1980s, Brazil’s government has sought to prevent outsiders, including missionaries, from coming into contact with those tribes.

Such encounters in the past have been devastating for Indigenous people, who lack immunity to common pathogens.

Upholding the no-contact policy is the responsibility of the National Indian Foundation, or FUNAI, the federal agency where Mr. Franciscato worked for more than three decades.

Its mission has become increasingly hard in recent years as loggers and miners have invaded Indigenous territories in violation of federal law, usually facing no consequences. President Jair Bolsonaro, who favors opening up more of the Amazon to development, has called Indigenous territories archaic and a hindrance to economic growth. He has compared communities living in the forest to animals in a zoo. 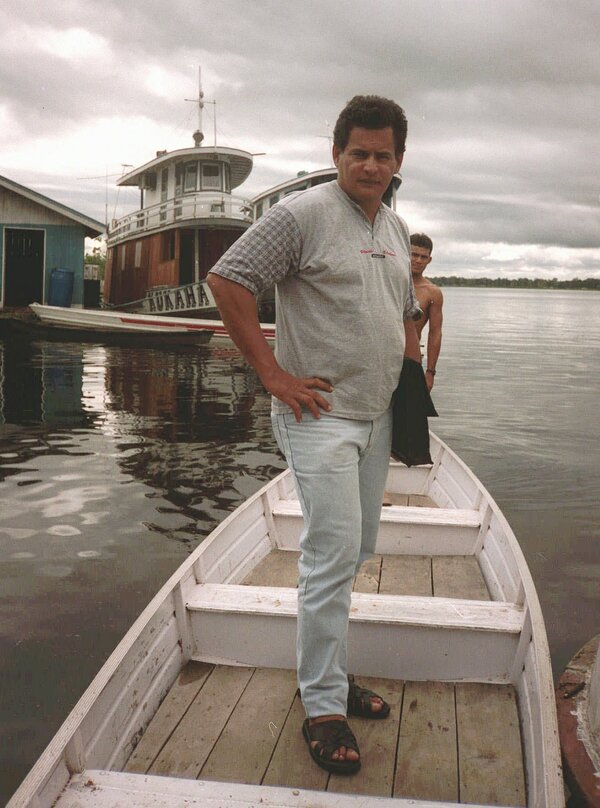 Even as FUNAI’s budget was slashed, with several of its remote field offices shuttered and its ranks reduced in recent years, Mr. Franciscato remained steadfast in his conviction that the last few humans living in isolation deserved protection.

“He was an excellent person,” Mr. Kampe said. “Everything he did was motivated by a desire to protect isolated communities and uphold their right to a dignified life.”

Ivaneide Cardozo, an Indigenous rights activist in Rondônia, said she and Mr. Franciscato often spoke about the dangers of what they both regarded as a labor of love. Mr. Franciscato, she said, feared that he could be killed by loggers, who are frequently armed, or by a tribesman, if he were mistaken for an invader.

In June, when Mr. Franciscato got word that a handful of isolated tribesmen had approached a ranch, he devised a plan to keep them safe. The possibility that one of those people could be exposed to the coronavirus and spread it among relatives was a worst-case scenario. So Mr. Franciscato pleaded with villagers in the area to avoid close contact with the tribesmen at all cost.

“‘I’m going to do everything in my power to protect those Indigenous people and I’m not going to allow them to make contact,’” Ms. Cardozo recalled him telling her.

But he saw it as a daunting task, she said, since Mr. Franciscato had effectively become a solo operation tracking several tribes in a vast area. “‘The sorun is I’m all alone, I don’t have a team and I need people,’” Ms. Cardozo said he had told her recently.

Ms. Cardozo said Mr. Franciscato was tireless as he studied the tribes from a distance. The work entails getting close enough to gather clues about how these communities are faring by studying their movement, their diet and any tools they leave behind.

“He made a note of every single thing,” Ms. Cardozo said. “Even the weather.”

FUNAI’s president, Marcelo Xavier, called him an “exemplary” public servant. “He dedicated more than 30 years to the protection of isolated Indigenous people,” Mr. Xavier said in a görüntü message.

When the group emerged from the forest in June, villagers said the tribesmen left a slab of meat and took a chicken from a ranch. That was interpreted as an amicable exchange.

When Mr. Franciscato came within eyesight of those tribesmen a few days later, he gestured to them that they should return to the forest, Ms. Cardozo said. He believed that was the safest course as long as a highly infectious pandemic was rippling across Brazil.

That fear is what motivated him to rush back to the field this week after hearing that five naked tribesmen had emerged from the jungle in another area of Rondônia, walking in a V-shaped formation.

Dhuliana Pereira, 18, was gathering wood near her house when the men approached carrying bows and arrows.

“My father started screaming,” she said. “We didn’t know what their reaction would be.”

A few hours later, Mr. Franciscato came by and interviewed all the villagers about what they had seen. Then he set out into the woods, tracing fresh footprints.

A few minutes later, Ms. Pereira saw Mr. Franciscato’s body on a wheelbarrow, which friends used to carry him to a police vehicle that rushed him to the hospital.

“He looked unconscious,” she said. “I saw no signs of life.”

Cooperation by cluster: the key to building business

Strength in numbers: the benefits when firms join forces