Every few years, a rogue disco moment slips into the mainstream: Madonna’s album “Confessions on a Dance Floor.” The Abba-based sinema “Mamma Mia!” Daft Punk’s tune “Get Lucky.” But in 2020, disco isn’t an outlier — it’s been saturating nearly every corner of the pop universe. Dua Lipa and Lady Gaga released albums filled with glittery anthems, and Doja Cat’s “Say So” hit No. 1 on the Hot 100. In November, Kylie Minogue is releasing an LP simply called, yes, “Disco.”

It’s a prime moment for the Irish dance-music supernova Róisín Murphy, an innovator who’s been putting a contemporary spin on the sound for two decades. On Oct. 2, she’ll release her fifth solo album, “Róisín Machine,” in which pulsing house beats and sleek strings are heightened by a cheeky theatricality all her own.

“I didn’t want to be as simplistic as a disco queen, because this music has come out of disco, proto-house and Goth, Throbbing Gristle and [expletive] Cabaret Voltaire and Donna Summer,” the Irish musician said of her new album. “It’s not just Black music, it’s not just alternative music, it’s not just dance music — it’s all of them things clashing and beautifully melding and becoming something that’s about individualism and freedom. This is what we need.”

It’s the kind of statement that might sound boastful or presumptuous coming from the mouth of a budding pop star. But as proclaimed by Murphy, a sort of singing Tilda Swinton with a Mercury Prize nomination and a genuine, enduring love for club life, it’s passionate and honest.

“She’s unapologetically unique,” Jessie Ware, a longtime fan who has hosted Murphy on her popular podcast, “Table Manners,” and released her own disco-heavy album this year, wrote in an email. “I don’t believe that she’s ever tried to appease.”

This last trait may have kept Murphy, 47, from becoming a küresel celebrity, especially in the United States. She is too discriminating for the mechanical big drops and woo-hoo euphoria of mainstream E.D.M., too artisanal for the slick choreographies, songwriting factories and carefully calibrated career moves of the industrial-pop complex.

“I don’t think I suit the world of pop stars at the moment,” she said. “Maybe if I could be like Roxy Music or David Bowie, then yeah. But you have to be cheap these days to be a pop star, and I can’t bring myself to do it.” She paused, then added, “I would like my catalog to become the pop star, eventually.” (She did praise Billie Eilish as the most interesting hitmaker to emerge in the past 15 years: “She’s come out of nowhere, and I hope she doesn’t let us down.”)

The musician was chatting on Zoom in the sitting room of her London home and picked up her laptop to give a quick tour, pointing to pieces by an ex-boyfriend, the artist Simon Henwood: the original artwork for her first solo album, “Ruby Blue” from 2005, and a rather large portrait. “He owed me some money so he left me the painting,” she explained.

Murphy, rambunctious and quick-witted, still speaks with an Irish lilt, even though when she was 12, her family moved to Manchester, the English city known for its commingling of the indie, dance and rave scenes centered around the Hacienda club. She stayed behind when her parents returned to Ireland a few years later and threw herself into the local night life. Relocating 40 miles away to Sheffield, in the early 1990s, proved more consequential.

“Everybody was very forward-thinking, everybody was very modernist, everybody was looking to embrace new technology,” she said of an influential scene that fostered the Human League’s catchy electronics and Pulp’s acidic flamboyance. “So that’s in my blood from there, and from being into Sonic Youth, the Butthole Surfers and the Jesus and Mary Chain when I was a kid. I came at music from a conceptual point of view rather than from being a trained musician, or having an ambition to be that.”

Murphy and her then-boyfriend, the bassist Mark Brydon, formed the trip-hop-ish duo Moloko, which broke big when its label commissioned remixes of the song “Sing It Back” — it was the late 1990s, and record companies were frantically trying to duplicate the crossover success of Everything But the Girl’s “Missing.” Murphy immediately reacted to the take by the German D.J. Boris Dlugosch. 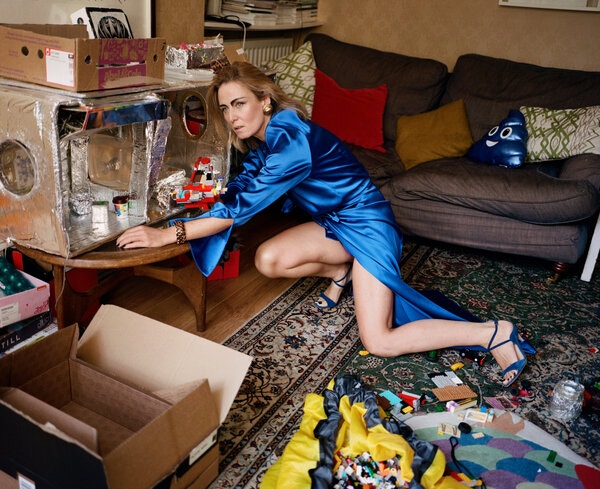 “I put it on the sound system, and it was like seeing Princess Leia appear, but it was me on ‘Top of the Pops,’” she said of the vision the music sparked. The edit took off around the world — it topped Billboard’s Dance Club Songs chart in the U.S. — and she did end up on the famed BBC show.

Moloko’s four increasingly dance-floor-minded albums were complemented by explosive concerts, but it was only after its breakup that Murphy truly refined her trademark fusion of glossy sheen and playful experimentation.

She recorded “Ruby Blue” with the esoteric electronic musician Matthew Herbert. Their collection of avant-funk, off-kilter cabaret and electro-jazz somehow remained accessible enough to land several songs on “Grey’s Anatomy.” In 2007 came “Overpowered,” which, with its companion videos, delivered a thrilling amalgam of musical and visual references: Salvador Kısmı and John Waters, the oomph of hip-hop production and the silk of synthetic soul. Hybridizing the precision of cutting-edge fashion with the heady spontaneity of the dance floor, she laid the groundwork for Lady Gaga’s arrival a full year before “The Fame.”

“I have come from club culture,” Murphy said, “but I’ve also come at it. I’m good at concepts.”

Her live shows escalated into sheer delirium. At a New York gig, she wore a deer-shaped houndstooth cape by the maverick designer Christophe Coppens and ended the show on the floor with her backup singers, fake-brawling with her backup singers in punk chaos. Four years ago at the Glastonbury şenlik, she started the song “Overpowered” in a neon safety jacket and brutalist dark glasses, before putting on a headpiece that looked like a blueberry doughnut; the arrangement involved a banjo and synthesizer gurgles.

“She’s her own planet, with its own language,” the Dutch designers Viktor & Rolf wrote in an email. “This is what true mystery is for us, a dark glamour that we can’t quite grasp but that attracts us so much. It is very rare nowadays to find this sense of mystery.” The designers mentioned Murphy’s performance at their 2010 Paris show “pregnant and singing live on a high pedestal. She was fierce.”

The connection Murphy builds between music and fashion is as strong as the bond she forges with audiences. Damian Harris, one of the founders of her current label, Skint, was moved to tears at a London show in March.

“To see her have the whole of the place in her hand was just stunning,” he said over Zoom. “It’s this sort of thing: ‘We’re all in this together, you’re coming with me on this journey, and it’s going to be a blast, trust me.’ Who would not take that hand?” 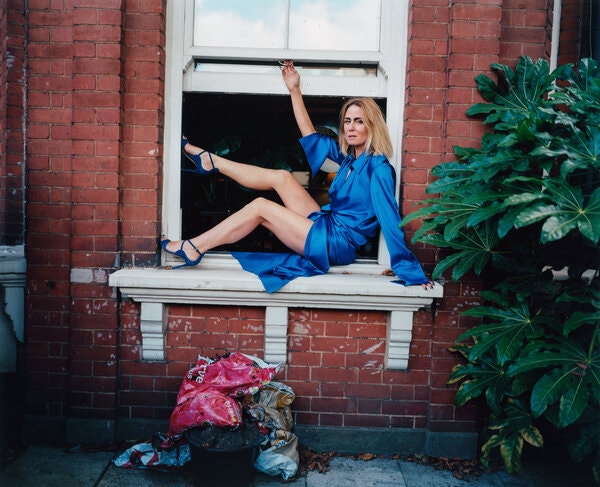 Harris, who was instrumental in propelling Fatboy Slim to stardom, is the latest in a long line of tastemaking accomplices. Sometimes Murphy seeks out new collaborators, like the Baltimore-born producer Maurice Fulton, with whom she released four EPs of striking minimal house in the late 2010s (“I just stalked him for years,” she said). Sometimes they come to her — her distinctive smoky contralto has made her a sought-after guest on dance tracks. One of those even led to what an extended mix of sorts: She fell in love with Luca C & Brigante’s Sebastiano Properzi when recording the duo’s song “Flash of Light.” (Murphy and Properzi now have an 8-year-old son; she also has a 10-year-old daughter from her relationship with Henwood.)

Murphy’s main co-conspirator on “Róisín Machine” is the Sheffield producer DJ Parrot, a.k.a. Crooked Man (born Richard Barratt), whom she’s known since she was a teenager. They made the album’s oldest track, “Simulation,” in 2012, with others coming together over the past few months. Yet the record feels of a piece, simultaneously timely and timeless.

“The thing about Róisín that really connects us musically is an understanding that a bass line and some clicking can be as emotionally affecting as a symphony orchestra, and likewise a singer doesn’t need to be crying in order to let you know that they’re sad,” DJ Parrot said in an email.

Murphy — who, for the record, does shine in front of a big orchestra — has started thinking about her next chapter, stepping behind the camera for her own videos and those of other bands, including a particularly riotous one for the British punk group Fat White Family’s “Tastes Good with the Money.”

“I wanted to get out of the music game by the time I’m 50 and concentrate on sinema,” she said. The one she really wants to make is about her childhood — “what I saw and the angle I saw it from,” she explained, and went on to describe being surrounded by people who had the guts “to create themselves and a new life, to take on all these things, not to let go of what’s old but to take on what’s new.”

It is likely that no matter the medium, Murphy will continue to operate in a rarefied galaxy of her own invention while remaining down to earth.

“Somebody said to me in an interview recently ‘I bet you don’t like being called a muse,’” she said. “But I [expletive] love being called a muse! The muse is the spark, the idea — might as well call me God as call me a muse! I would much rather be a muse than a diva,” she continued, laughing. “I don’t relate to the diva, although many people do relate me to the diva. It doesn’t account for the amount of humility and modesty you have to have to create with others.”

Tellingly, the joyfully eccentric home videos Murphy made during lockdown this past spring stood out from the earnest messages of hope and solidarity that flooded YouTube. “They are pop videos for this moment, when you want more than somebody on a birçok beach or just [expletive] lip syncing,” she said. “Who wants that now?”

Who, indeed, when you can have a siren in German Expressionist eyebrows and madcap designer outfits, crooning to propulsive backing tracks? Carried away, dancing up a storm while performing her recent single “Murphy’s Law” in May, she stumbled on the hem of her enormous polka-dot dress only to bounce right back up, shouting “I’m all right!” The crowd in her virtual nightclub cheered. One can only imagine what she’ll dream up when her fans are standing adoringly before her evvel again. 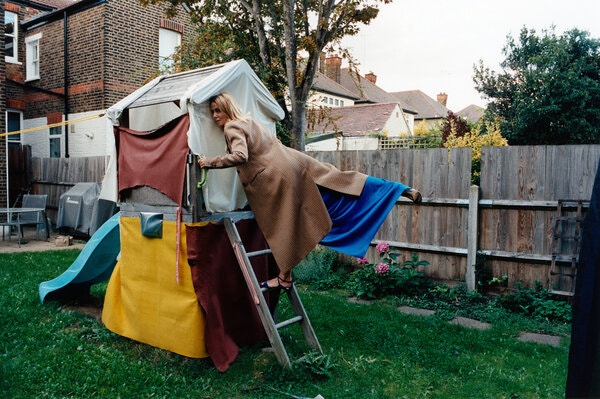 Nurses are in the COVID-19 pandemic front lines. They should be first in line for a hisse rise ǀ View

As it battles COVID-19, Europe is being stalked by a shadow pandemic: domestic violence ǀ View